Hilarious Parking Fails That Will Drive You Nuts 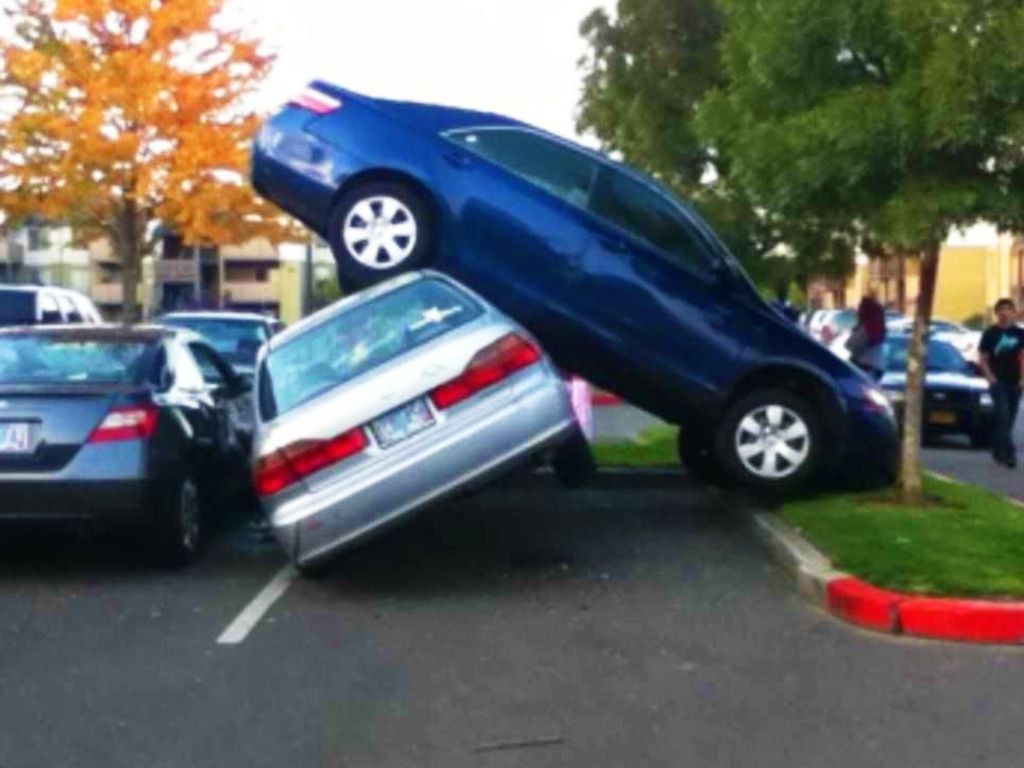 It’s no secret that the streets and highways are full of bad drivers, but there is also an equal amount of people who can’t park to save their lives. When someone parks badly it can wreck other people's day, too.

You’ll see what we mean when you check out these parking fail photos. By the time you’re done reading you’ll be asking yourself why anyone gave these people licenses in the first place!

This Car Got Too Close to Nature

This driver did a banging job at parking too close to Mother Nature and then they started sinking into the Earth. It’s like the environment is slowly trying to eat this vehicle alive in revenge for all the fumes it released into the atmosphere.

They Drove Over the Curb

This driver didn’t know when to stop and drove over the curb of this storage garage. We’re honestly surprised that they didn’t damage their wheel axle. But if they continue to park like this, their mechanic is going to get rich trying to fix the framework damage on this car.

Dividing Curbs Are for Pedestrians Only

This driver made two big mistakes. The first one was to drive into this dividing curb that was clearly intended for pedestrians only. The second mistake was not moving their car out of there before this cop ticketed them.

This Driver Had No Boundaries

Not everyone has a driveway, so sometimes, visitors are forced to drive their car into someone’s front yard. But this driver didn't have a care in the world and drove so close to the house that the car practically kissed the wall.

You know the old tradition. You toss a coin into a fountain, make a wish and it’ll come true. Well, this driver must have wished for a car wash because the next thing he knew, he was driving right into a fountain.

They Parked On a Roof

Whoever drove this car into someone’s roof must have been a fan of the classic “Knight Rider” series. In the show, the car K.I.T.T. had a feature called Turbo Boost that allowed it to jump over tall things. But this driver clearly missed his mark.

Maybe this driver thought their car was so cool that it deserved to leave its mark in the world the way Hollywood stars leave their handprints on cement in the walk of fame. Then again, they might have just driven over a freshly cemented road, which makes this more like the parking of shame.

Driving Over the Edge

This driver was edging closer to the curb of this gas station parking lot, but he obviously couldn’t tell how much room he had left and went over the edge. It’s probably a good thing it happened at this station because there are probably a few technicians there that can help pull the car out of this jam.

Parking in the Ocean

For some weird reason, this driver decided to drive his truck off the sandy shores and into 20 feet of water. Maybe he had a few too many but one thing’s for sure, this truck now has a serious case of hydrostatic lock, which means it’ll probably never drive again.

Silly driver! Didn’t anyone tell you? Docks are for yachts, not trucks! We feel bad for the people that own these boats. They were probably banking on sailing today, but this truck driver did an awesome job at ruining their day (and their boats)!

This Driver’s a Total Rebel

Most people know that you’re supposed to park inside the lines. But this driver is a total rebel and decided to laugh in the face of traffic rules and parked in front of not one but two parking spaces. Seriously, what's wrong with people?

Finding a decent parking spot isn’t always easy, but there was no need for this driver to ram his car into this recently planted baby tree on the sidewalk. Some drivers simply have no compassion for their surroundings.

Parked on a Rock

4x4 monster trucks are designed to handle just about anything, including driving across flooded areas. But this guy must have gotten a little too distracted and wound up parking one of the wheels of his truck right into that huge rock.

They Knocked Over a Metal Pole

You have to hand it to them for managing to knock over a metal pole with their car. Maybe it was on purpose. They probably saw that handicapped parking sign and thought, “If I knock the sign down then I won’t get ticketed for parking in a handicapped spot without a permit.”

This Driver Took the Stairs

Most drivers take the stairs up or down after they get out of their vehicle. But this driver thought that they would save some time by simply driving their car down the stairs. Judging from the look of it, it didn’t go so well.

They Parked on a Fire Lane Curb

We’re not sure if this driver reversed his car or drove forward but they’re dangling on the curb of a fire lane. And if their parking fail wasn’t enough of a violation, they also parked in a red zone where parking isn’t allowed.

They Drove Over a Large Rock

There’s only one thing that could have led this driver to drive over a rock—distraction. There are so many other places this driver could have chosen to park in but she had to choose this one. Whoever she’s explaining the situation to over the phone must be laughing their butt off.

They Didn’t Hit Their Brakes in Time

The bigger the car, the harder it is to gage where to stop. This SUV driver obviously missed the mark and went overboard. Either that, or they accidentally hit the gas pedal instead of the brake.

They Drove Into a Brick Wall

This driver set a collision course for a brick wall and didn’t stop until they hit their mark... literally! Either their brakes failed completely or they are one of the worst drivers on the road. We're gonna go with the latter.

They Parked On This Hillside

They say that the grass is always greener on the other side. Maybe that’s what this driver was thinking about when they drove their vehicle into this grassy hillside and left it parked there. Why couldn’t they just park in between two lines like everyone else?

Even underground parking lots aren’t immune to bad parking. This person could have driven up a foot more, but instead they decided to just let the rear of their car hang over someone else’s parking spot.

Parallel parking sucks! We all know it. But if you can’t do it, don’t try bending the rules by leaving the backside of your car sticking out. Not only is it dangerous for other drivers, but you’re leaving your car exposed to a potential accident.

Not Quite There Yet

Here’s another example of lazy parking. This driver was halfway into their parking spot when they decided enough was enough and just left their vehicle there. But given that the tail end of the car is sticking out, we wouldn’t be surprised if another driver accidentally struck the vehicle.

It Was Right in Front of Them

There was an open parking space right in front of them. Was it really that hard for them to drive just a little bit further? This is completely reckless and could possibly cause problems for other drivers trying to get through this parking lot. Some people just want to watch the world burn, I guess!

The Upside Down Car Garden

One person’s parking fail is another person’s garden project. Someone obviously did a horrible job at parking because their car is upside down. Then for some odd reason, they decided to turn the underside of the car into a garden. All I gotta say is, why not?