Hilarious X-Ray Findings That Seem Too Crazy To Be Real

Matthew Loffhagen
Hilarious X-Ray Findings That Seem Too Crazy To Be Real January 30, 2020Leave a comment 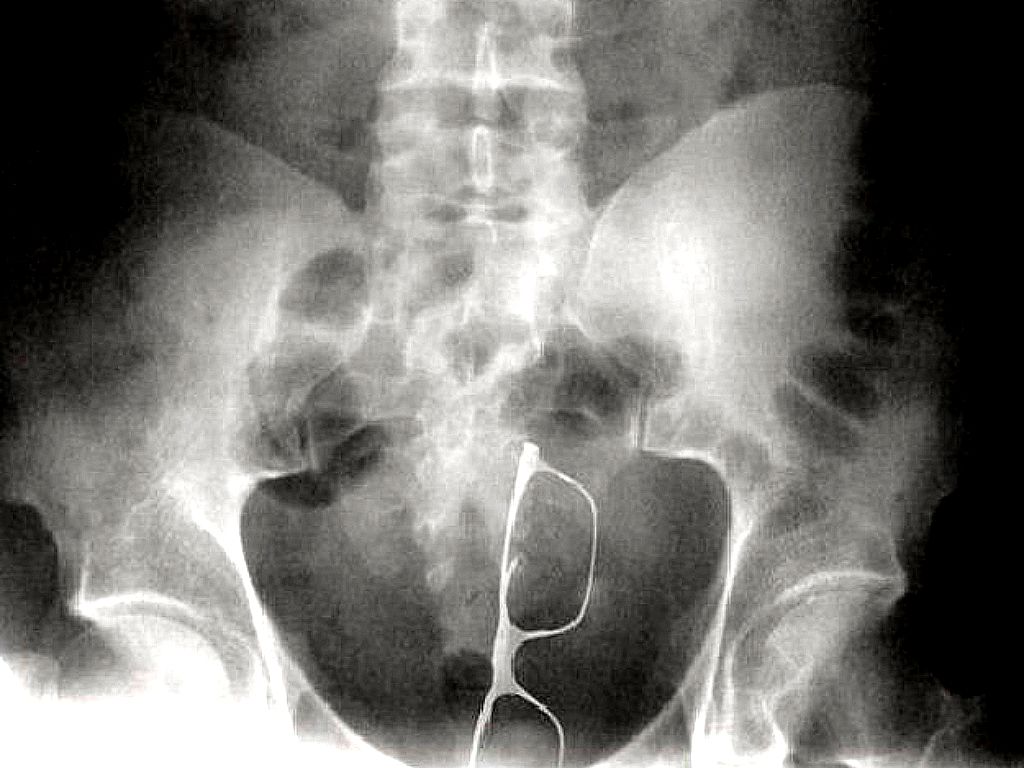 Accidents happen to everyone, and there's not much that can be done to avoid some health problems. That said, these X-rays show that there are certain things you should try to avoid putting in your body if you don't want to end up in the ER with nurses giggling over your X-rays.

No matter how cute Spongebob Squarepants might be, he's not edible. One poor child managed to swallow a small toy, and the resulting X-ray is more than a little creepy. Thankfully, the object was removed without any complications.

Of course, adults have been known to swallow strange things as well. The real question about this X-ray, is how you even manage to swallow a cutlery knife?

Most people may not realize just how large a beer bottle is in comparison to your vital organs, so this photo puts that in a totally new perspective. Thankfully, this bottle didn't puncture any tissue or result in further injury.

This fish hook was stuck in the thumb of a fisherman who finally got to find out exactly what kind of pain he was putting so many fish through on a daily basis. What is most frightening is just how close the hook managed to get to his bone!

If that object in this X-ray looks familiar, that's because it is the famous toy astronaut, Buzz Lightyear on maybe one of his most frightful adventures yet! This really gives new meaning to that "Toy Story" song, "You've got a friend in me..."

This is possibly the most bizarre X-ray in existence. Not only did someone have a shoe stuck inside them, but there was still a foot in that shoe! How both patients managed to stay still for the X-ray is a baffling thing to imagine.

There's no question about how this little dart got into a patient's neck - this is a taser. Medical X-ray resource Radiopaedia notes that taser injuries are becoming more common, especially in the UK where police aren't armed with guns.

Doctors were able to get a pretty clear X-ray of the coffee jar that this patient inserted up their rectum. They never did find out why the jar was full on metal pins, and now we'll all be wondering about that for the rest of our lives.

Twitter user Sydney Allenn tweeted this X-ray with the caption: "My mom found out I got my nipples pierced today."

Another children's toy that's seen some serious stuff; at least Hello Kitty and Spongebob will have something to talk about when they next meet at a party.

There's clearly a long and complicated story behind how this patient ended up in the ER with a stiletto show wedged in their eye socket. Luckily for them, doctors are more interested in treating injuries than sharing gossip.

Ever given a kid their allowance and told them not to spend it all on candy? It could be worse: the child could cut out the middleman and just swallow the coin itself!

Prawn in the Ear

According to its case notes, this X-ray is the result of a fishing trip gone wrong. The patient was admitted with a hook attached to his ear, along with the prawn that he was using for bait. Ouch.

Pro tip: do not put an engagement ring in food or drink. Just don't do it. Doctors are constantly dealing with disgruntled fiancees who have a particularly interesting engagement story to tell.

Magnets are not food, but they are small and often smooth, making them very tempting to hungry children. They are at least slightly less dangerous than batteries, which kids should never be allowed to play with unsupervised.

This woman's day wasn't going too well when she was admitted to the ER with a knife still lodged in her abdomen. Thankfully, she was able to make a full recovery.

The best part of the case notes for this X-ray is that it's described as "Diagnosis almost certain." Just a guess, but the problem might be caused by the nail that's gone right through the patient's thumb.

See those dots on the patient's left breast? She managed to swallow her toothbrush. The whole thing. Weirdly, this is apparently not an uncommon reason to be admitted to the hospital.

The case notes for this image note that the patient has a history of mental illness that has often caused her to try to eat harmful things. In this case, she swallowed the end of a power cord, and you can still see the cable trailing around out of her mouth and across her chest.

Knife to the Hand

Here's an image that doesn't need much explanation, except that you probably shouldn't stab yourself or anyone else through the hand with a large kitchen knife.

A woman in China was making dinner when she began to feel her airways close. Panicking that she couldn't breathe, she tried to open her throat with her fingers. When that didn't work, so she tried some chopsticks, but they broke. Finally, she inserted a metal spatula down her throat, which made a bad situation worse. Luckily, her four-year-old daughter had been well prepared for emergencies, and was able to get help. Doctors removed the spatula, but never found the cause of the initial allergic reaction.

This is a deodorant bottle that someone had inserted inside themself. The doctor's case notes read, "It will take more than that to make things smell good."

There's nothing wrong with this X-ray, but it is really cool. At the top it's possible to see the subject's belly button piercing, which is bright white. Down at the bottom, you can see the woman's menstrual cup. X-rays like these are important for doctors as they help them to identify foreign objects that might be inserted into the body for deliberate health reasons.

Ever wondered what a hip replacement actually looks like? Turns out it's pretty steampunk! A comforting thought, considering that hip replacements in younger patients are becoming increasingly common.

A ten-year-old boy swallowed a marble, and this X-ray was taken two hours later. That marble's moved through his system pretty fast!