Human Body World Records That Are More Than a Little Freaky 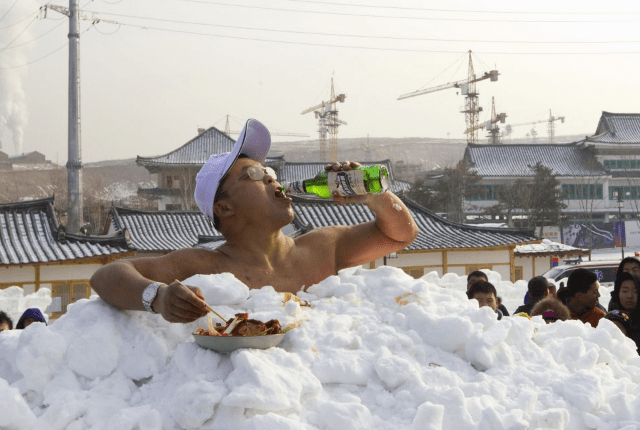 Human body world records are a very specific kind of statistic. Because not only are you seeing either the heaviest, biggest, or smallest of something, but you're seeing the most remarkable one of those things in the world. So holding the title for a body-related world record is a responsibility. And all of these people are brave for taking on these responsibilities. They hold their titles with pride. And we revere them. So here are a bunch of weirdos.

World Record For Most Orgasms In One Day

Sarah Carmen, 24, has up to 200 orgasms every day without sex. Her Permanent Sexual Arousal Syndrome (PSAS) makes it so that the slightest vibrations cause her to climax. “I’ll want to wear myself out by having as many orgasms as I can so they stop and I can get some peace,” she says.

The shortest person in the world is a man named Chandra Bahadur Dangi, who is 75 years old, from Nepal, and measures 1-foot-7-inches.

The Longest Feet In The World

Brahim Takioullah from France has the longest feet in the world. His left foot is 1-foot-3-inches, and his right foot is 1-foot-2.75-inches. He has to custom-order shoes that can cost him more than $5,200 for one pair.

Listen, all vaginas are strong as hell. But Tatyana Kozhevnikova has a vagina that can lift 31 pounds. She puts in a wooden egg then attaches weight to the egg, so this is all pure kegel muscles working their asses off. “It’s enough to exercise your vagina five minutes a day,” she says.

The title of “Hairiest Family in the World” belongs to the Aceves family. Suffering from a rare congenital generalized hypertrichosis, the women have a light coat of hair throughout their bodies, whereas the men grow hair everywhere, including every part of their face.

The Longest Fingernails In The World

There are women all over the world with extremely long fingernails, and a woman holds the world record for longest nails currently, but what about dudes? Do they do the long nail thing? They sure do. Melvin Boothe had nails that, combined, were over 32 feet.

The Heaviest Man In The World

Jon Brower Minnoch was the heaviest man in the world, and in recorded history. He weighed over 1,400 pounds. and had to go on a diet in the hospital. After a 1,200 calorie/day diet, he was discharged once he hit 476 pounds. Much of his weight was water retention due to his congenital heart disease.

Nee Annie Hawkins-Turner has the largest natural breasts in the world. Her breasts are size 102ZZZ. Confirmed by Guinness, her breast size looks like it’s sleeping. On getting made fun of daily she says, “I’m human like everybody else.”

If you’ve ever touched snow with your bare hands you know that they go numb after about a minute. Jin Songhao of China made full-body contact with a mountain of snow surrounding him for an entire 46 minutes and seven seconds. He drank beer and ate some food to stave off boredom. Because why not.

After getting tattoos on his penis, a 21-year-old Iranian man got a permanent erection. One of the tats reads “good luck on your journeys” in Persian script. Another is his girlfriend’s last initial, “M.” After failed surgeries he now lives with the condition.

Recently deceased, the world’s heaviest woman was Eman Abdul Atti. She weighed 1,102 lbs. Some Guinness World Record holders have weighed as little as 675 lbs., so 1,102 is really going for the gold. She passed due to heart and kidney complications.

There will be no jokes on this page about the world record for the longest tongue because I am a professional. It belongs to a man named Nick Stoeberl from Salinas, CA. It is 3.97 in from its tip to the middle of his top lip when it’s closed. So that doesn’t even include the inside of his mouth!

The Largest Intact Tumor Ever Removed

A woman who had an ovarian cyst-turned-tumor went to see a doctor when her 303 lb. tumor had gotten out of hand. It took a team of 12 to extract it, and there’s video of the whole thing. The woman had to lie on her side, because if she were to lie on her back, the tumor would crush her.

The World's Most Elastic Skin

So there’s apparently stretchy skin is a thing. Garry Turner has Ehlers-Danlos Syndrome, and he uses it to his advantage to hit every TV show imaginable. He can stretch his stomach skin out to 15.8cm, which is a world record. His skin is a little painful, but he gets by.

Don’t try this at home even though it feels like it would be pretty easy and that you could definitely do it gradually. You will get hurt. Maxwell Day, on the other hand, has the ability to rotate his foot an insane 157 degrees at will. Looking at pictures of him is confusing.

Donald Trump, am I right? *catches the tomato thrown at him and takes a bite* But the literal biggest mouth goes to Fransisco Domingo Joaquin who can open his mouth like an alligator. He can fit 7 inche in his stretchy mouth (sideways). He can even pop a coke can in there.

The Most Spoons Ever Magnetized To A Human Body

The human body is capable of innumerable miracles and one of them is somehow being able to hold spoons with it. Etibar Elchiyev from Georgia (the country) was able to “magnetize” 50 metal spoons to his body. And that’s a world record.

The McGuire twins were famously the heaviest twins in the world. They were professional wrestlers and Guinness has them in as the still-reigning “World’s Heaviest Twins.” They weighed 723 lbs. and 745 lbs. They died in a motorcycle crash on their way to Ripley’s Believe It Or Not!

It is absolutely insane that anyone can do this with their body. They have races. It basically looks like Andy Serkis is playing all of these people. Kenichi Ito runs 100m in only 16.87 seconds… on all fours. That’s above average (13 - 14 secs) for the fastest people who do this on foot.

So this is disturbing on multiple levels, but the youngest person to ever give birth in recorded history is Lina Media, who was five years old at the time. Her baby grew to live past 40 and died in 1979. Born in 1933, she is still alive and lives in Chicago Chico in Lima.

If you have problems with hair volume, then you could never achieve what Kazuhiro Watanabe did when he crafted himself the “world’s tallest mohawk.” At a whopping 3 feet and 8.6 inches long, you can only imagine how much he spends on hair products.

The Most Tattooed Female Senior Citizen

There’s a title I bet you didn’t know existed. Charlotte Guttenberg has tattoos over 91.5% of her body. This leaves out her whole head, the palms of her hands and soles of her feet.

The largest afro in the world doesn’t even really look very ridiculous. It looks pretty fly, actually. Aevin Dugas from New orleans holds the title of “biggest afro” and is sporting locks with a circumference of up to four feet and four inches.