Alabama College Student Walks 20 Miles to Get to Work on Time, CEO Rewards Him With a Huge Gift 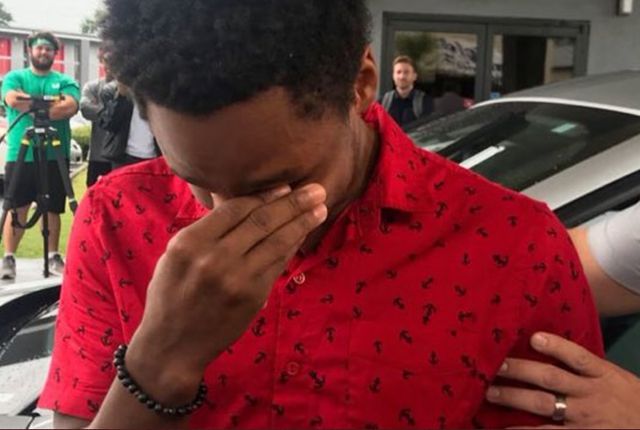 An Alabama man walked 20 miles to work so he wouldn’t disappoint his new boss. But he wasn’t expecting what his boss did next...

A Friend in Need

20-year-old Walter Carr sent text messages to all the people on his contact list. It was definitely urgent. The college student’s car had broken down and he needed some wheels right away.

[dx_custom_adunit desktop_id="RTK_K67O" mobile_id="RTK_5yk0"] Carr had worked in fast-food restaurants in the past, but this new job of his offered more money, which he desperately needed. But life threw a wrench at him when he least expected it...

He was going to start his job as a mover the following morning. But the home he had to drive to was located in Birmingham, Alabama. That was 20 miles away from his apartment. What was he to do? He had to get there somehow.

His friends were no help. None of them could drive him to work. But this was going to be his first day with the moving company. He couldn’t just not show up, as he was looking forward to working with the company.

[dx_custom_adunit desktop_id="RTK_K67O" mobile_id="RTK_5yk0"] In an interview with The Washington Post, Carr shared his desperation: “I sat there and I thought, ‘How can I get to my job? What streets would I walk through? How long would take me to get there?’” But Carr realized there was only one way to fix this issue.

He plotted the route using an online web mapping serve and estimated it would take eight hours to walk from his apartment in Homewood to the house in Pelham. But as a former cross-country runner, Carr felt he could do it in less time.

[dx_custom_adunit desktop_id="RTK_K67O" mobile_id="RTK_5yk0"] Carr was never the kind of guy who relied on others. He even told The Washington Post, “I’ve always been that person who figured things out on my own. I went out walking.” So he knew this one the one time where he needed to shine, and he needed to shine bright.

At 8 p.m., Carr ate some bologna and eggs, and took a nap. Then he woke up at midnight, grabbed his phone and his wallet, and he headed out. He was on a mission.

[dx_custom_adunit desktop_id="RTK_K67O" mobile_id="RTK_5yk0"] By 4 a.m., Carr had made it to Pelham, but his final destination was still hours away. He decided to walk to the highway ramp, which would be more direct. But he was burned out.

He Needed a Break

Carr walked 20 miles, but first he took a breather in a bank parking lot. Then a police officer named Mark Knighten asked him if he was OK, and Carr told him what he was up to.

He Needed a Ride

Officer Knighten offered to drive Carr somewhere where he could get something to eat. But Carr explained to the officer, “I just paid my rent. I have no cash on me at all.”

[dx_custom_adunit desktop_id="RTK_K67O" mobile_id="RTK_5yk0"] Knighten offered to pay for the meal and Carr said yes. They headed to Whataburger with a couple of other cops. Carr had a chicken biscuit, but the officers insisted that he order himself another biscuit.

Afterwards, Knighten drove Carr a couple of miles closer to his job. But he had to leave him at a church because the officer’s shift was over. The officer promised that another cop would pass by and check on him.

Carr was worried he wouldn’t make it to his job, so at around 5:30 a.m., he kept on walking. Then another officer named Scott Duffey picked Carr up and drove him the rest of the way.

[dx_custom_adunit desktop_id="RTK_K67O" mobile_id="RTK_5yk0"] At 6:30 a.m., Duffey knocked on homeowner Jenny Lamey’s door to explain to her what Carr had gone through. Of course, Lamey’s home was the one at which Carr was supposed to meet the other movers.

Lamey told the Washington Post, “The officer told me, ‘I’ve got this nice kid in my car. He’s a great kid, he’s been walking all night to get to your house.’” Lamey was practically in tears.

Lamey offered Carr some food and a place to nap, but he just wanted to start working. As soon as the two other movers arrived, they started to help the Lamey family move to their new home.

[dx_custom_adunit desktop_id="RTK_K67O" mobile_id="RTK_5yk0"] Lamey admired Carr’s endless amount of energy. He even took some time to play basketball with Lamey’s boys, ages 11, 13 and 16. Lamey said, “I can’t imagine what kept him going.”

Lamey hopes that her family and Carr will be able to establish a long friendship. He told her that his determination to achieve the impossible was an example of the way he was raised. But there was something at store for Carr, and he had zero idea about what was coming...

The next day, Lamey told Carr’s supervisor what he’d done. Then Lamey wrote about it on Facebook. She also started a GoFundMe page to help Carr fix his vehicle. The goal was $2,000, but they ended up raising a whopping $91,849.

Thank You So Much

[dx_custom_adunit desktop_id="RTK_K67O" mobile_id="RTK_5yk0"] The moving company’s chief executive, Luke Marklin, called Carr to express his gratitude. They met at a coffee shop a few days later, but Carr had to walk 20 minutes to get there. And he had no idea what awaited him as he was about to get the shock of his life.

Marklin gave Carr his 2014 Ford Escape, which he felt would be put to better use in his employee’s hands. Marklin had set a high bar for folks working at the company, but Carr went above and beyond, and he deserved the recognition.

The Alabama man walked 20 miles to ensure his first day on the job wasn’t his last. But he had no idea that his experience would teach others that a can-do attitude can help you achieve anything you desire.

The World Was Watching

[dx_custom_adunit desktop_id="RTK_K67O" mobile_id="RTK_5yk0"] Ever since then, Carr has been featured on CNN, Fox News, BBC, NBC and many other news outlets. Now he’s even received scholarship offers. You can bet you’ll see great things from this committed and brilliant young man.