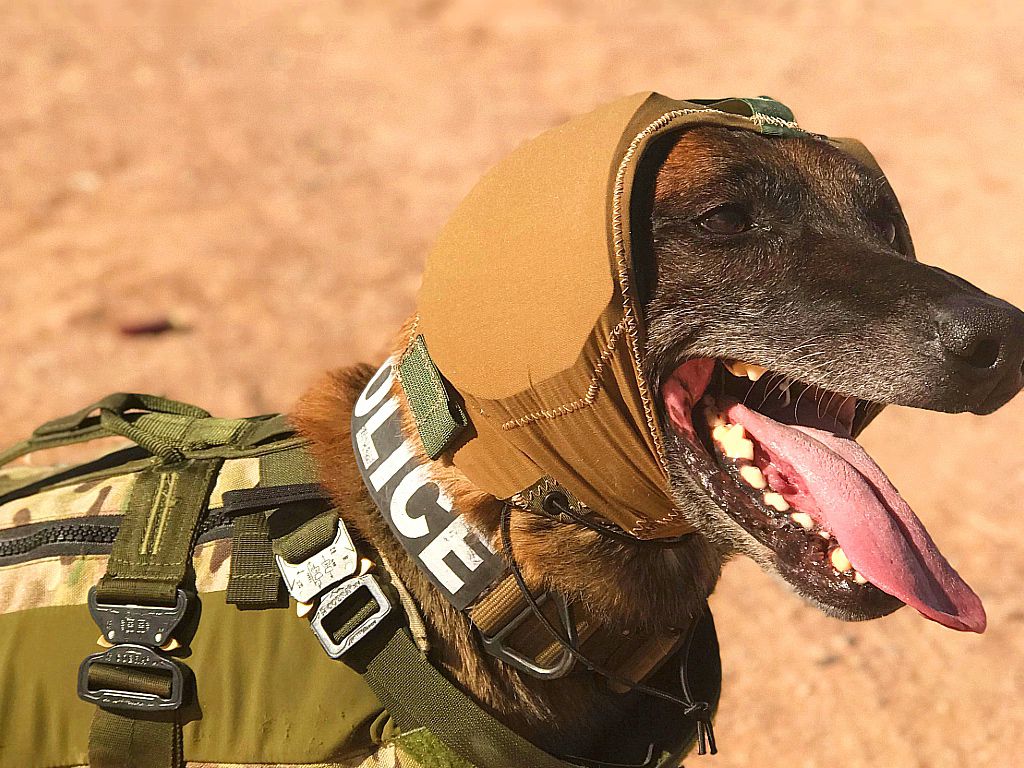 For years, military dogs have suffered from hearing loss as a result of loud noises on the battlefield. Now, a new piece of technology might be the key to sparing these poor pups both temporary and permanent deafness. But, more research still needs to be made to implement this solution permanently.

It’s a well known fact that dog ears are a lot more sensitive than humans. They can pick up sound frequencies that are completely undetectable by our ears, and this is just one reason why they’re so useful in tracking, security and other military roles.

Unfortunately, with extra sensitivity to sound comes the need for dog owners and handlers to take special care of their canine friends. Loud noises can easily distress dogs, and noises that are harmless to human ears can cause major damage to our furry friends.

Case in point: for years, military experts have been trying to find a way to make the battleground less harsh for doggy ears. It’s not uncommon for military dogs to suffer from significant hearing loss as a result of their service.

Not only is this bad for the dogs, but it’s bad for their missions. A short trip in a helicopter is enough to overwhelm military dogs’ ears, making it more difficult for them to hear and respond to voice commands issued by their handlers once they’re meant to be at work.

The big challenge is learning how best to help dogs. It’s often not simply a case of putting noise-cancelling ear protectors on a dog, because let’s face it, getting a dog to wear headphones isn’t exactly easy.

Finally, a workaround may have been found. The US army is testing a brand new, specially designed piece of technology which will protect dogs’ ears without making them uncomfortable.

The Canine Auditory Protection System, or CAPS for short, is a revolutionary new technology which cuts out sound while remaining lightweight and flexible. It’s a far cry from the rigid, heavy ear defenders that dogs have been wearing up until this point.

The benefit of CAPS is that it allows noise cancelling material to be distributed over a wider area, so the dogs don’t have anything bulky resting on their heads. CAPS fits snugly into a snood which can be easily strapped to a dog’s head, and removed quickly without too much effort.

The snood forms a tight seal around the dog’s head to prevent sound from getting in past the noise-cancelling material. This is useful as dogs’ ears are designed to collect as much sound as possible, making it difficult to effectively block out loud noises.

The snood that CAPS fits into can also be used for other protective gear, such as goggles or sunglasses. Dogs rely on their hearing and sense of smell more than their eyesight, but it still helps if they’re able to see clearly on the battlefield.

Because the noise cancelling material is barely more than an inch thick, the dogs can wear their snoods in all kinds of scenarios – including crawling through tight spaces – without dislodging their headgear.

CAPS was developed by researchers at Cincinnati University, alongside Zeteo Tech, Inc. The technology is still in the testing phase and isn’t ready to be rolled out just yet, but it could be very useful once it’s been perfected.

In tests, the headgear has already proven to reduce short-term hearing loss caused by loud noises, such as rides in helicopters. It’ll be a long time before the military has substantial data on long-term hearing loss, but this could hopefully lead to even more effective versions of CAPS in future years.

This technology isn’t just going to help military dogs. Plans are in motion to allow police, border patrol and security dogs to also have access to the snoods. While they’re not quite as likely to face helicopter rides, these dogs similarly could benefit from extra hearing protection.

Hearing loss is one of the major reasons that dogs have to retire from high stress environments – if they’re not able to hear commands, they’re of less use to military personnel. The hope is that the CAPS snoods will lengthen the amount of time a dog can serve in the military, maximizing the returns from the costs of training each dog.

This is also good news for morale, both for the dogs themselves, and their human counterparts. Not only are dogs effective soldiers, they’re also known as “battle buddies” – they give human soldiers an extra level of mental health support.

The longer a military dog can serve before retirement, the more they can develop a healthy relationship with the humans they see regularly. It’s hoped that this will help soldiers to better face the emotional and psychological strain of active duty.

According to Army Research Office senior scientist Dr Stephen Lee, “This new technology will extend canines ability to work in a wide range of environments in combination with the soldier and autonomous systems that could greatly enhance situational awareness of the individual soldier in the future and empower a broader use for military working dogs in operations.”

From Lee’s comments, it’s clear that not only will these snoods help protect dogs that are already in service, but it might be possible to find new opportunities for dogs in the military, as they’ll be able to operate in more diverse fields.

Plans are also in motion for CAPS snoods to eventually be made available to the public, so that conscientious pet owners can make sure their dogs’ hearing is protected.

According to Dr Pete "Skip" Scheifele, over eighty breeds of dogs in the US currently suffer from congenital hearing loss. With noise-cancelling snoods, many of these dogs could enjoy better hearing for longer into their lives.

This is good news for dog owners who use their dogs for work – such as farmers – but it’s also great for non-working dogs who occasionally get spooked by loud noises, such as from fireworks.

What’s more, the same CAPS technology could be used for other people with sensitive hearing issues, such as children. Research has shown that if a toddler is scared of a hand dryer in a public bathroom, it’s for a very good reason, as these can damage their ears.

Even adults could eventually benefit from CAPS, as there may well be uses for this technology in ear defenders for workers on construction sites, at loud music venues, or simply as a solution to making lighter, more portable and comfortable noise cancelling headphones.

Who's a Good Boy?

It remains to be seen just how effective these noise cancelling snoods will be for dogs serving within the military, but it’s good to know that faithful canines who serve alongside humans are getting the love and care they deserve.