Matthew Loffhagen
How One Instagrammer Invented a Whole New Hairstyling Trend (And How to Get the Look) October 8, 2018 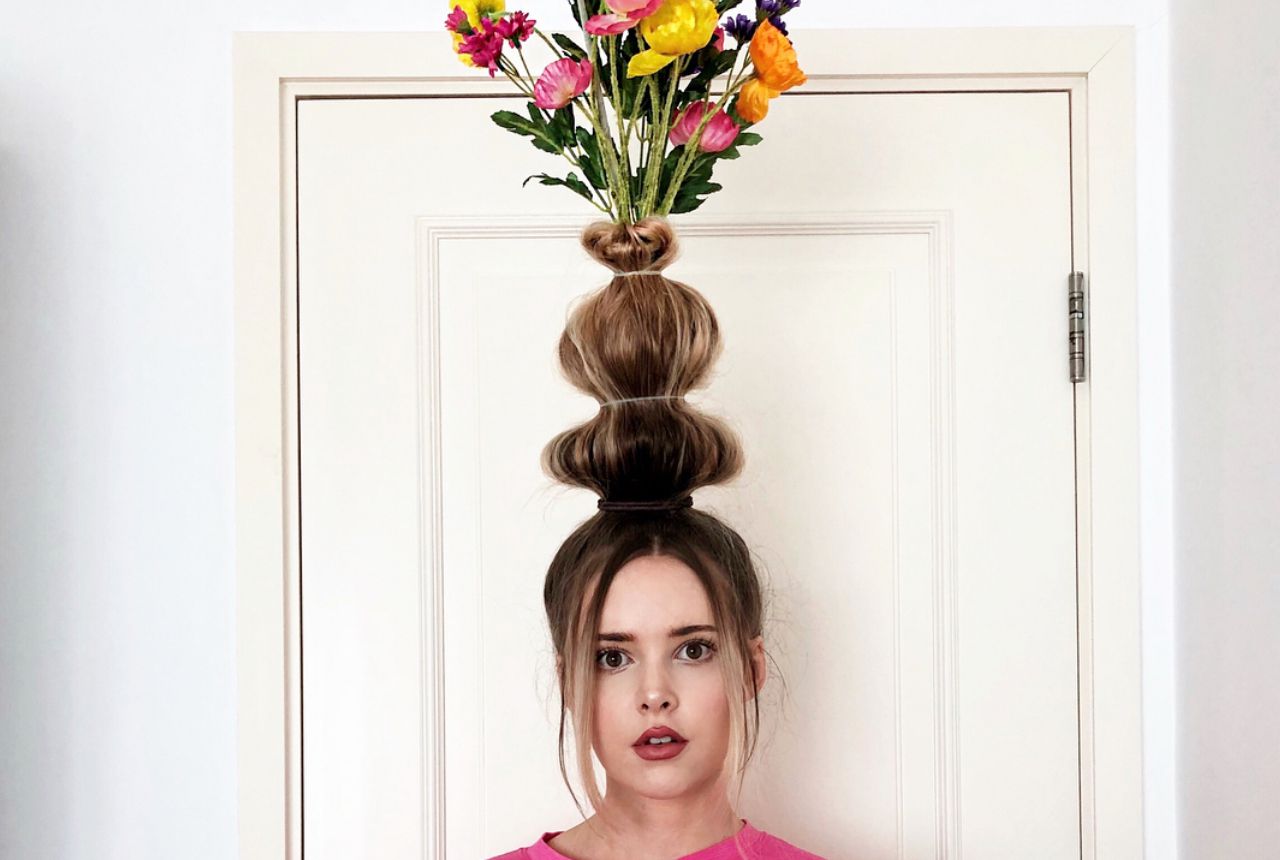 Fashion can be odd sometimes. Things that end up becoming popular aren't always the most logical or sensible ideas. The new hair vase fashion trend, though, is all about practicality. Albeit a little less than completely effective. YouTube star and Instagram model Taylor R has kicked off a new trend of styling hair in the form of a vase in order to contain a beautiful bouquet of flowers. The style is surprisingly easy to pull off, and women around the world have been giving it a try. But why is this gaining traction, and what could possibly be behind this latest flowery fashion phenomenon?

Say Hello To The Hair Vase

Ever wanted to wear a boquet of flowers in your hair? Well now you can, thanks to the latest trend that's taking Instagram by storm. But why are Instagrammers so eager to get in on this new fashion style?

It's safe to say that having a vase of flowers on the top of your head isn't particularly comfortable. But believe it or not, this style was created as an attempt to make wearing flowers more practical. To explore this trend, we first need to meet its creator...

Say hi to Taylor R, a YouTuber with nearly a million subscribers, who's also passionate about Instagram. Taylor lives in Hong Kong, where she gets the chance to embrace plenty of wild and wonderful new fashion trends.

Taylor is big on trying new things, and is eager to find new ways to stand out from the crowd. These might get her some strange looks in public, but it's hard to argue that she looks incredible.

One of Taylor's more recent creations has gone viral, as she's taken to the streets wearing her hair in a vase shape. Her inspiration for this style? None other than pop sensation, Beyoncé!

It All Started With Beyonce

Taylor's idol is Beyoncé, who recently shared photos on Instagram from a Vogue photoshoot. These showed her with flowers woven into her hair, turning her into a beautiful extention of the colorful plants. This all gave Taylor an idea.

As gorgeous as Beyoncé looks in the photos, Taylor couldn't help but feel that the look is too impractical and time consuming to catch on. She endeavored to find a quicker, easier, more manageable way to create a hair boquet.

The core of Taylor's hair sculpture? Nothing more complicated than a plastic bottle. It's perfect for holding flowers, and it's not so heavy as to weight down the wearer. Score one point for recycling!

In a video guide to creating the hair vase, Taylor points out that the trick is to use a series of hair bands to hold the bottle in place. Alas, this style is only really going to work for those with a lot of long hair to work with, as the next step shows.

The hairbands are only the first step. Wearers also need to then plump out the hair in the right places to help to create the vase shape. Then, leftover hair is tucked into the top. With this out of the way comes the fun part.

It's probably not very easy to put flowers into a vase that's resting on your head, so this might be a challenge. To start with, Taylor used fake flowers, before getting more inventive.

Taking to the Street

Her creation complete, Taylor toured the local area, drawing plenty of strange looks from passers by. Innovative fashion is rarely appreciated in its early days, although in fairness, Taylor did have a really hard time getting in and out of her taxi.

Ah, the Mormon missionary, a staple sight on any street corner in Hong Kong. This particular Elder was eager to grab a photo with Taylor, in what could well be the very first flower hair vase group selfie. Clearly, the trend is taking off.

It didn't take long for Taylor to find more fans of her bizarre fashion style. This old lady's hair might be a little too short to give the style a try herself, but she certainly enjoyed watching Taylor strut her stuff.

A woman who caught a glimpse of Taylor heading up an escalator, and couldn't help but stop and stare. For better or worse, this style is making an impact, but Taylor had plans to improve it further.

Taylor strolled up to a local florist and explained that she wanted to swap her plastic flowers for real ones. This was a delicate job, and the florist was happy to help spare Taylor the challenge of trying to carefully insert these flowers into her own head.

A Rose By Any Other Name

Taylor tried a bunch of different flowers in an effort to find the best possible look. Perhaps the most striking was a selection of roses that really looked gorgeous. But upon sharing this with the world, Taylor was unprepared for the response she was about to see.

The Trend Takes Off

It turns out that plenty of other people are eager to try out the style. Everyone involved manages to give it their own personal twist, making for some truly fabulous looks.

The trend may have started in Hong Kong, the cradle of Eastern fashion, but it quickly spread around the world. Instagrammers from every corner of the globe started getting in on the trend.

No Two Vases Are Alike

The best thing about the hair vase fashion trend is that it looks different on everyone, depending on hair color and type. Straight hair looks very different to curly hair when turned into a vase, but everyone who tries this looks beautiful.

The other varying factor in these hair vases is the flowers that are available locally. Sure, roses are a fun choice, but so is a bunch of heather, or sunflowers, or even simple daisies. There's no flower that can't be worn!

Some Instagrammers started adding additional embellishments, such as flowers part-way down the vase, or ribbons or bows. While the style was designed to be easy to create, there's no harm in adding a little extra creativity!

One hope that Taylor had from her style was that someone would try something different, such as a pair of pigtail vases. This symmetrical look is particularly difficult to maintain, and gravity doesn't help the situation, but it's hard to deny that it looks amazing.

Those with dyed hair can add an extra flair to the style by picking flowers that compliment their bright color. This isn't the only way to wear flowers as a hair accessory, but it's certainly eye-catching.

Of course, the long hair vase probably won't ever gain mainstream appeal because it's so difficult to hold in place. But a shorter, neater vase? This can look just as gorgeous, while being even more practical. It seems that the trend of emulating Beyoncé hasn't finished evolving just yet.