Hilarious Pups Behind the “Beware of the Dog” Signs

Camila Villafane
Hilarious Pups Behind the “Beware of the Dog” Signs August 17, 2020Leave a comment 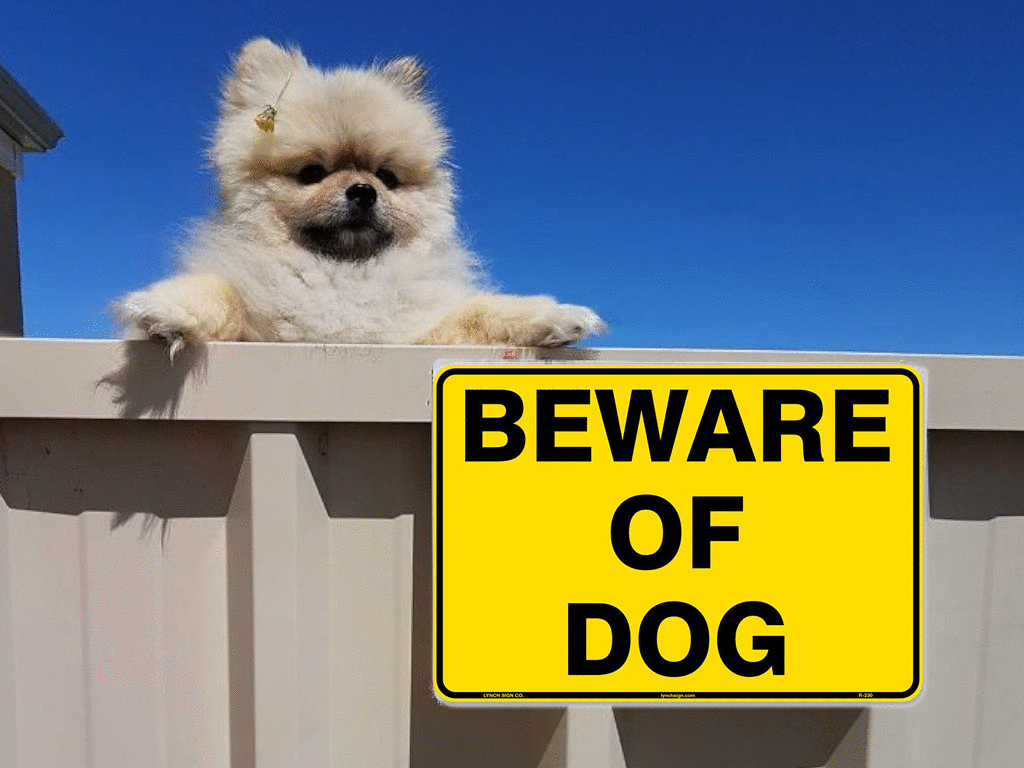 Those “Beware of the Dog” signs exist for a reason. You don’t know how dogs will react to you when you cross into their space and you can’t always tell where their territory starts or ends.

Then again, some of the dogs lurking on the other side of the fence aren’t dangerous at all. They’re just cuddly and friendly like the adorable canines in these photos.

Beware of Its Cuteness

This might be false advertising. There’s no way that this poodle could be a threat to anyone unless you’re diabetic. Then you run the risk of going into a coma from how sweet this little fellow is. You might even melt into a puddle of happiness when you play with it.

You Can’t Resist Petting Her

This beautiful pooch is so cute that everyone in the neighborhood ignores the “Beware of the Dog” sign and sticks their hands through the bar just so they can spend all day petting her. The only fear you need to have with this dog is fear of dying from cuteness.

There’s something about the way they’re tilting their heads that’s terrifyingly adorable. It’s like they’re saying, “Come in. See how harmless we are. Come on. We won’t bite. Honest.” Make sure to bring some treats with you just in case.

No, Don’t Shut the Gate

The sign is telling you to please shut the gate, but his eyes are telling you not to shut it. So, what if the gate is saying no? His adorable face is saying yes and that’s all the excuse you need to open up the gate and your arms and cuddle with this beautiful creature.

This is one dog who’s certainly not living up to his reputation. It’s on the floor with its front paws up like it’s begging you to ignore the sign, walk in and pet his belly. This sign seems more like a warning not to fall for his adorably awesome manipulation techniques.

It looks like this dog just picked out this sign from a bin and is begging his human to buy it. But let’s be honest. Who on Earth is going to believe this sign if the owner puts it up on their fence? This pooch is simply too darn cute to scare anyone.

He’ll Lure You In With Sweetness

Could you resist not saying hi to this pooch who’s sticking his tongue out while waiting for a human to pass by and pet him? It looks like he’s just waiting for love. But while he might look friendly, he’s also big enough to chase after you if you walk into their yard. So, tread carefully.

That dog on that “Beware of the Dog” sign should have included a disclaimer that says something like “dog shown on the sign is actual size.” They should also add another sign that says “Watch Your Step” because the pooch is so tiny you might not see it.

He Attracts More Than He Keeps Out

He’s such a cutie that he’s more likely to attract people rather than keep them out of the property. Just look at that little fluffy face. But don’t underestimate him because the sign doesn’t lie. It will attack your heart and never let go.

Beware of the Crazy One

The dog sticking his head through the gate looks a little crazy, but his goofy face is about the only thing you need to beware of. He’s so crazy that the dog on the left-hand side is hanging his head in utter embarrassment. Then again, there’s the dog on the right that’s saying, “Go ahead! Come in and see what happens.”

Watch Out for This Attention Seeker

That beware sign seems more like an attention sign, which is exactly what this pooch seems to want. It’s not interested in biting or scratching you. It’s like the teddy bear of dogs and it just wants to slobber your face with kisses.

Beware of the Sunbathing Dog

About the only thing you have to worry about here is getting inspired to do the same as this dog and joining him on the grass so you can sunbathe all day. The only thing this pooch wants to do is lay on his back. But you better rub his belly or he’ll rip a hole in your pants.

This is Her Scary Face

The gate is the only thing that’s standing between him and the outside world. He desperately wants to get out, but right now, he would settle for someone stopping by and petting him on the head. But watch out or he might attack you with a lick to the face.

This Pug Will Mess You Up

This little pug is such a cutie. But make sure that he’s already downstairs when you go and greet him. If you try making it up the stairs, it might try to trip you. But kidding aside, pugs are very protective of their territory and their humans.

Beware of the Friendliest Dog Ever

Beware of what? This Golden Retriever has such a sweet face. The only thing you need to beware of is this pooch smothering you with kisses or bewitching you with his beautiful eyes. One look at him is all it takes to get you to fall head over paws in love with him.

He’ll Rip You a New One

Don’t let this little guy’s size fool you. He’s mean as a snake. Just look at his face. That alone should deter you from trying to trespass. But just in case you need more convincing, there’s also that pillow next to him which he seems to have ripped to shreds.

Enter at Your Own Risk

You might be thinking that he’s just standing on a chair and that he’s really not that big. Also, he’s very cute and fluffy. But then again, he might be standing on a bigger dog’s back and his big brother might be a whole lot more dangerous.

Watch Out for The Guard Twins

They’re twinning and they’re cute. They also look like they’re being squished by the house, but they’re actually just trying to make contact with the outside world through the bottom of the gate. If you go down there for some cuddling, you’ll never come back up.

She’ll Maul You With Her Smile

She might seem ferociously adorable but her smile and cuteness are her guise! She looks all innocent and then she’ll attack you with those paws of hers and then feed you to her big friend that’s sitting in the back waiting for its dinner, so beware!

It Will Never Release You

Watch out or don’t! This pit bull is way too adorable to be a threat to anyone. About the only thing you'd have to worry about if you jump over this gate is that it’s going to use its jaws to clamp shut on your heart and never let go.

This fluffy brown pooch is so adorable but beware... It will slobber all over you, so enter at your own risk. Once it gives you a good licking, you might have a complete meltdown from all the cuteness. So, make sure to put on a wet suit first.

Beware of Her Pointy Ears

It might not look like it, but this German Shepherd is actually still young which is why her ears are so big and pointy. She’ll eventually grow into them the way she’ll grow into your heart. When that happens, you won’t be able to escape her.

He’s Too Bored to Care

He’s like, “Whatever, I’m not going to bite you. All I want is some company. My mean owners have left me here all alone to guard this house. But if you show me some love, I’ll let you break in and take anything that you want.”

They say that chihuahuas can be vicious sometimes, but the only viciousness this dog has is in its power are to make you fall in love with it. Plus, it’s got a cute sweater. But just in case, tread carefully because these squeaky guys have a way of turning on people.

Please Break Me Out of Here

This boxer isn’t interested in keeping anyone out. It wants help to break out of this home! But no one took notice of that because of the sign. So, it’s making a plea for help with his sad dog eyes so you’ll get him out of there.