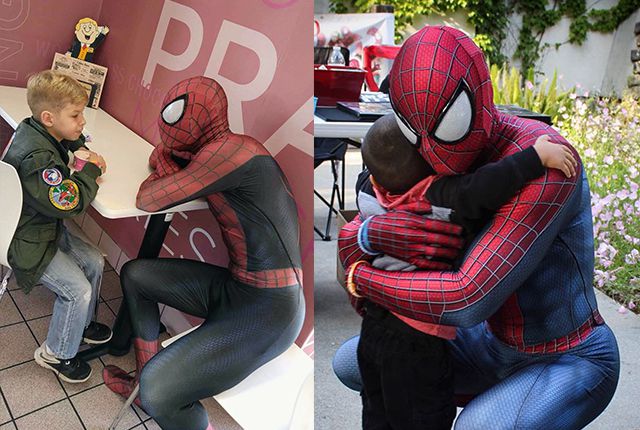 Ricky Mena went through some ups and downs, and through it all, he struggled between the light and the darkness. But when his grandmother came to him in a dream, he knew that it was his destiny to be a superhero. He decided to turn himself into one of the most lovable characters in Marvel—Spider-Man! Ever since then, this real-life Spider-Man has been visiting sick children since 2014. He visited over 10,000 sick kids who desperately needed some pick me ups. Some of them are fighting PTSD and even terminal illnesses.  But now this heroic man brightens up their days with gifts, love, and a lot of laughter. Ricky Mena is definite proof that heroes really do walk among us!

Over the last four years, 34-year-old Ricky Mena has visited over 10,000 sick kids in hospitals around the world, bringing laughter and joy. And he did so while wearing a Spider-Man suit!

[dx_custom_adunit desktop_id="RTK_K67O" mobile_id="RTK_5yk0"] Being surrounded by children who are dealing with serious illnesses, terminal conditions, and PTSD was pretty rough on his psyche. But Mena made sure to put his best foot forward and brought life and laughter to an otherwise dark situation.Then again, this real-life hero is no stranger to dealing with the chronically ill.

Man Behind The Mask

This real-life Spider-Man was originally from Fort Knox, Kentucky, but a couple of years later, he moved to northern California. Sadly, his childhood was pretty tough, especially since his mom, Tammy Mena, was chronically ill and always in the hospital.

Comics Were His Escape

His dad worked a ton of jobs to cover his mom's medical expenses, so when Mena was a child, his only escape from reality was through comic books. He told Daily Advertiser, “I used to read the crap out of them.” But he was still angry at the situation.

[dx_custom_adunit desktop_id="RTK_K67O" mobile_id="RTK_5yk0"] As a 9-year-old, he had to watch someone he loved endure a lot of pain, and he felt absolutely powerless. This ultimately turned him into an angry young man. Unfortunately, the anger grew as he became a young adult. But that was about to change.

Mena hung out with a bad crowd during his 20s. He told Daily Advertiser that his mom asked him to do something for her. She told him: “Ricky, I’m not gonna be able to see the world – go see it for me.” Soon enough, he was focusing on music and sports. But he felt that something was missing.

Music was a big deal to him, so in 2013, Mena went to Los Angeles to work on his music career, but he turned down a record deal because he refused to change who he was. This had unfortunatedly led to some financial problems.

[dx_custom_adunit desktop_id="RTK_K67O" mobile_id="RTK_5yk0"] Without the music contract, Mena was completely broke, so he moved to Philadelphia to lead a normal life with his girlfriend. But he couldn’t find a job, and the relationship got so bad that they broke up. But things were about to get a little more complicated before Mena would be able to see the light.

One night in October 2013, he woke up feeling like he was having a heart attack. An hour later, he discovered his grandmother had passed away from a heart attack, and suddenly, she was gone. Even though Mena felt broken, he remembered his grandma told him to pursue his musical dreams.

Mena told Daily Advertiser: “She and I had always shared a very spiritual bond.” Apparently, the two were connected on a whole different level as his grandmother used to work for a psychic hotline. "She always told me that I was going to do something special," he added.

He Knew He Just Needed To Keep Going

[dx_custom_adunit desktop_id="RTK_K67O" mobile_id="RTK_5yk0"] In the beginning, he didn't buy it. But soon enough, he would come to realize that she was right. Mena was on a journey, but he didn’t know what the destination was. However, he told Daily Advertiser that he asked her where he was destined to go, and she responded: "I don’t know, but it’s something so major, you need to keep going."

A Friend In Need

In January 2014, Mena drove back to California and crashed on his friends’ couch. While struggling to figure out where he belonged, he started looking for work, and eventually decided to focus on fitness.

Mena’s friends paid for his personal-training certification. Eventually, he managed to increase the number of fitness clients and was able to make some cash again. But he knew deep inside that this wasn’t his endgame.

Message From The Other Side

[dx_custom_adunit desktop_id="RTK_K67O" mobile_id="RTK_5yk0"] One night in June 2014, his grandmother came to him in a dream. He told Daily Advertiser: "I remember looking at her, knowing it was a dream, but it felt like we were really talking. She was pointing to an old-school movie projector, with a huge screen. It was Spider-Man, and he was flying around a hospital, dropping presents to thousands of kids hooked up to IVs and making them laugh."

This Is Who You Are

Mena continued saying: "I asked her what it had to do with me, and she had this serious look on her face. She looked at me and said, ‘That IS you, and when you wake up, that’s what you’ll do.’" This actually pointed Mena in the right direction.

A Suit For A Hero

When Mena woke up, he felt like the dream had evoked a sense of purpose inside of him that he simply couldn’t ignore. So, he decided to go out and find himself a Spider-Man suit. But there was one problem.

[dx_custom_adunit desktop_id="RTK_K67O" mobile_id="RTK_5yk0"] Mena found a man who made realistic Spider-Man suits for $3,000, which was steep. But when Mena told the man why he wanted the suit, he reduced the price to $1,400, which Mena still couldn’t afford.

Throwing Money For A Good Cause

Mena told Daily Advertiser that his supportive friends told him: “Let’s throw something good in this world.” So, Mena sold his car, bought the suit, and a few toys. But he hit a snag when he tried looking for a hospital, as they were a bit skeptical at first.

Mena had zero experience dealing with kids, so every time he called a hospital to arrange a visit, they turned him down. But then a fitness client of his referred him to her godson who was at Oakland Children’s Hospital.

[dx_custom_adunit desktop_id="RTK_K67O" mobile_id="RTK_5yk0"] Mena visited the child and put a big smile on the boy’s face. So, Mena took a snap, which he shared with his mom. She replied back and told him: "'Do you know what today is?'  It was the one-year anniversary of Grandma’s passing." But was it a coincidence or a sign that he was on the right path?

Heart Of A Hero

Mena eventually visited kids five to seven days a week. He even started a non-profit group called Heart of a Hero, so he could travel all over the world and form bonds with ill kids who needed a little pick me up. He even revealed his secret identity.

He Was There To Help

He didn’t just dress up like a hero, he also behaved like one. He explained to Daily Advertiser: "I changed diapers, fed, prayed, washed, all of that." But there was an unforeseen side effect to his visits.

[dx_custom_adunit desktop_id="RTK_K67O" mobile_id="RTK_5yk0"] Within a one-month period, this real-life Spider-Man saw five kids succumb to their illnesses. That alone is heartbreaking. But when the friends who let him crash at their place, moved away, he suddenly felt like he was descending back into darkness.

In August 2017, he told a woman, who asked him if he was alright, that he was in a dark place. But he felt guilty about taking a break when the sick children he visited simply didn't have that option. It turns out that Mena was actually sick.

Mena was suffering from post-traumatic stress disorder (PTSD), so after his diagnosis, he took September off, resumed his visits, and then took January off to recover. With the help of anti-depressants and therapy, he managed to bounce back.

He Wouldn’t Change A Thing

[dx_custom_adunit desktop_id="RTK_K67O" mobile_id="RTK_5yk0"] The last few years may have been difficult, but Mena wouldn’t do anything differently. He told Daily Advertiser: "I know that I am working for God, and I would be foolish not to continue doing it, seeing the impact it’s had."

On May 23, Mena took to his Instagram account to share some awesome news: "Today, I married my best friend! It was so amazing to have Kendalls family and mine under the same roof to witness the commitment we've decided to make to each other. This woman makes me laugh and smile so much while supporting everything I do with the children." Clearly, Mena's living life to the fullest!