Woman Finds Sickly Stray On The Street, Now the Dog is Unrecognizable 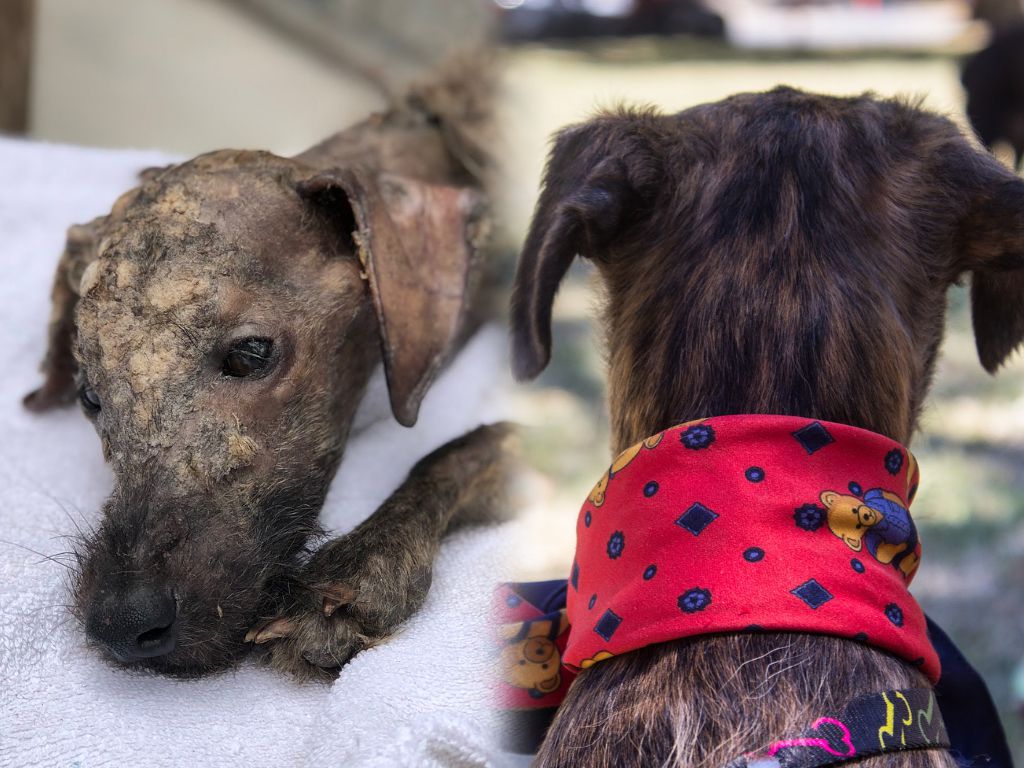 When one woman took in a stray dog, she had no idea what she was getting herself into. Two years later, this poor animal's transformation is absolutely unbelievable.

Pia took the skeletal dog home with her immediately in the hopes of trying to save him. In all honesty, it looked as if he wouldn’t survive the night, but at least she could make him comfortable in his last hours.

A Dog in Need

On December 23, 2017, good samaritan Pia discovered a small stray dog that was in need of immediate attention. He was frail and weak, and had lost most of his fur to sickness. It seemed impossible that this dog would ever fully recover from his ailments...

Pia was visiting a friend in Buenos Aires, Argentina, who first told her about the dog. The friend had seen him in the neighborhood, but had been unable to catch him. Although he was very sickly, he still had some power left in him.

Losing the Will to Live

Pia couldn’t believe that nobody was trying to help the poor dog. By the time she found him he was lying on the ground and wasn’t moving. It seemed like the end for this dog, but Pia was determined not to give up hope. She knew that as long as he was alive, he could recover.

“There was no shine in his eyes,” recounts Pia, “at this point, he had given up.” Pia knew she needed to do something. With the right medical care, she knew this dog could recover and she was the only person who was willing to make that possibility a reality.

Too Weak to Complain

While ordinarily, a stray dog might be wary of or even hostile towards unfamiliar humans, this pup was far too weak to protest. Pia wrapped a blanket around him to keep him warm as she tried to decide what to do next.

Pia managed to place the dog in a cage, and took him to the vet. She was told that nothing could be done, and at best, they needed to wait until after Christmas to see if he even survived. Pia was not about to give up yet.

A New Plan for Christmas

Pia took the skeletal dog home with her immediately in the hopes of trying to save him. In all honesty, it looked as if he wouldn’t survive the night, but at least she could make him comfortable in his last hours.

The long night that followed was heartbreaking. The mangy dog was too weak to move, and couldn’t even eat. Pia had to stay at his side, carefully tending to him. It seemed unlikely that he would make it to Christmas...

While the dog couldn’t eat, he could at least drink water. Pia kept topping up a bowl to keep him hydrated, holding it up to him so he could lap it up. This alone was much more care than he was used to, which soon started to brighten his eyes and change his spirits...

In spite of his condition, the little dog refused to give up. Pia could tell that he wanted to live, and somehow, he endured his first day with her. Little did either of them know that this would not be the end of their incredible story...

In recognition of her new friend's fighting spirit, and the miracle of his survival, Pia named the dog Hercules. He might not have been strong enough to stand up, but he was definitely strong enough to stay alive. He would soon prove even her wildest expectations wrong.

Pia didn’t know what she would do with Hercules in the long run. Eventually she’d need to find him a new home, but in the meantime, her priority was keeping him alive. There were two times when she was certain Hercules was going to die, but somehow he kept on living.

Pia and Hercules continued to bond as he slowly grew stronger. Even small actions, like moving his legs, we’re beyond him, as he was still too weak. But things that seemed impossible so recently, like drinking and eating, were quickly becoming possible. So, Pia held out hope for more improvements.

Eventually, finally, Hercules began to become more mobile. He was able to move his front paws and started growing back some of his fur. Even this improvement made him unrecognizable from his former self. He already seemed like a new dog!

It took longer for Hercules' back legs to gain strength. Despite encouragement from Pia, he was unable to stand up or walk around. But Pia stood by his side for as long as he needed.

Then, Hercules conquered his biggest trial. According to Pia, once he was ready, he simply stood up without needing any help. Hercules once again lived up to his name by showing incredible strength that no one thought possible.

Hercules had been so weak that it was almost as if he needed to learn to walk all over again. His first shaky steps were difficult, but soon he was walking like a newborn puppy.

With more time, Hercules started not only walking, but running as well. He also started playing games of fetch as he felt stronger. At this point, it was nearly impossible to know about his past just from looking at him.

Only a few short days after regaining the use of his legs, Hercules’ hair growth sped up dramatically. Soon he was bushy and fluffy, and looked significantly healthier.

As Hercules became stronger, Pia prepared to put him up for adoption so that he could find a new forever home. But how could she say goodbye to a pup that loved her so much?

In the end, Pia decided that she and Hercules couldn’t bear to be parted. She adopted him herself, adding him to her family.

As Hercules grew stronger, more of his personality shined through. Where he had been slow and reserved, he now bounded around the house, playing and yapping like any other healthy dog.

Two years later, Hercules doesn’t even look like the same dog. He’s made a full recovery, and there are no signs that he ever went though such a horrible ordeal.

The only real visible evidence of his journey is the love and affection he shares with Pia. It’s clear that Hercules is eternally grateful to his human for saving his life, and now he trusts her completely.

Hercules and Pia show that no animal is beyond saving. Their journey has been difficult, but they have each other, and that has made all the difference.