Me, Myself And I: All The Signs You Might Be Full Of Yourself

Camila Villafane
Me, Myself And I: All The Signs You Might Be Full Of Yourself May 10, 2018 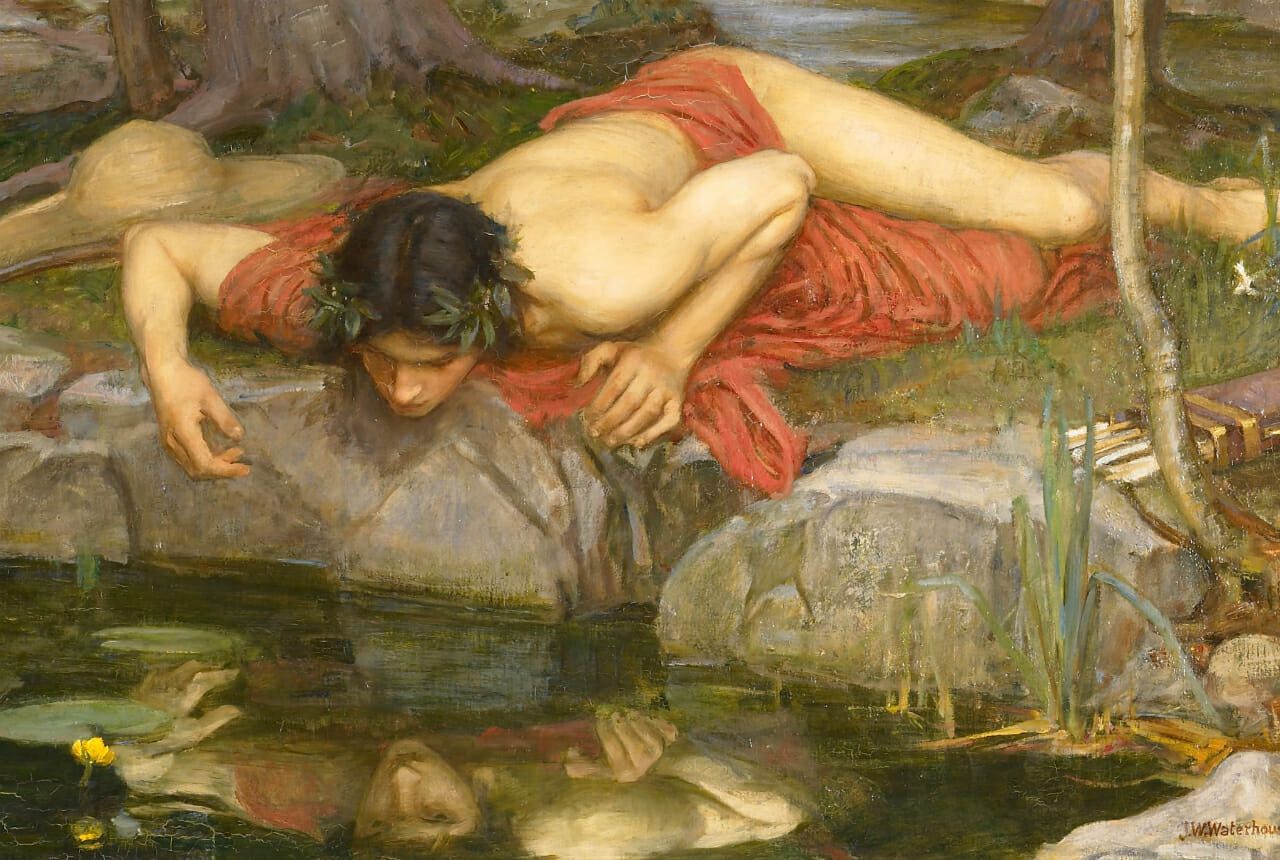 Signs you might be full of yourself and loving every minute:

So you've been accused of being totally full of yourself on more than one occasion. But to be honest, you're not really sure what they mean by that. You assume they're accusing you of being too selfish, but that's not it at all.  You kind of feel like everyone's intimidated by your confidence . But there's a fine line between being confident and arrogant. Being confident is like having a big d---. You don't go talking about how big it is to other people. You just know it is and that makes you happy. But when you're full of yourself, you're basically whipping it out at the dinner table and slapping it in everyone's faces so they'll know too. If you're still not sure if this applies to you, then check out these signs you might be full of yourself.

You Love Talking About Yourself

You never listen to what other people are going through. How can you? You're too busy hogging the conversation and talking about yourself. In your world, your troubles, opinion, and accomplishments are all that matters. It's all about how your day's been going, how your job is the greatest, and how much money you spent on your last holiday.

You Think You're Perfect

You'll never admit to the fact that you f----- up or that your life is just as messy as anybody else's. You feel the need to be perfect 24/7, so you constantly pressure yourself to put up a front. Among the signs you might be full of yourself, seeing yourself as the apex of human evolution is on the top of the list.

You Feel Threatened By Others' Success

You know you're full of yourself when you can't be happy for someone who has become as successful as you have, or even more successful than you. So rather than being the bigger person and celebrate a friend, family member, or competitor's victory, you talk smack about them because the thought of complimenting them seems absurd.

Not only do you not want to listen, but you don't really care what anyone else has to say. You hate listening to other people. It's why you're always talking over them. But when someone else is praising themselves over their accomplishments, you have to get involved fast and quickly shut them up to talk about your victories.

You Care About What Others Think

Everything you do is based on what others think of you. There's a little voice in your head that tells you that others will judge you if you post a certain photo on social media. So you refrain. You make sure to only go to the cool hangout spots and spend time with popular people because you have a "reputation" to maintain.

You're Constantly Worried About Your Looks

You look at your reflection in your rear-view mirror or any reflective surface you can find. You make sure to select bars and cafes with great lightning so you look flawless. You even take a selfie to check and see if your makeup is okay or if your hair is a mess. You even try to see if you can check your own reflection in someone else's eyes.

You Are Always Competing

You feel like you're in a competition with your friends, your BFF, and even your life partner. The thought of them doing better than you drives you insane. So if they get a promotion, you strive to get a promotion too. If they buy a new car, you get an even better one. You either compete or you sit and sulk until the jealousy eats you up.

You Make Sure You're Always Noticed

You're not a celebrity, but you sure act like one. Whether you’re wearing the flashiest outfit, the most expensive jacket and shoes, or you’re making a grand entrance, you make sure people know you're there. You try hard to get everyone to notice you that you even resort to laughing unnaturally loud, screaming, or making obnoxious comments. When you walk into a room, people know you're there.

You get so angry when someone else gets complimented...particularly if you feel like they don't deserve it. It makes you feel as if others aren't noticing how amazing you are. After all, you're the cutest, smartest, coolest, and sexiest person on the planet. So why are they focusing on someone else? You resort to making a snarky remark towards the person getting the attention just to feel good about yourself.

You Forget Details About Others

You can't be bothered with little things like remembering someone's name, what the conversation you just finished having was all about, or their personal history or problems. You don't even take the time to jot down a friend's birthdate on your calendar because you're too important to worry about trivial things like that.

You Ask For Favors But Never Return The Gesture

You often ask for favors, but it's more like a demand because you expect everyone to stop whatever the hell they're doing in order to service you. This is your world, your life, and the people of Earth are nothing more than helpers. Plus, don't they know that your problems come first?

Your Love To Self-Promote

You can't shut up about yourself and everything that you've achieved. Okay, so there's nothing wrong with being proud of what you've accomplished. But there is such a thing as going overboard and expecting everyone to celebrate every single one of your milestones. Signs you might be full of yourself include loving the look of envy in others when you brag. Ouch.

You Believe Others Love You As Much As You Love Yourself

You convinced yourself that you're simply amazing. But you've gone overboard because you've deluded yourself into thinking that everyone else thinks you're amazing too. You even believe that people love hearing you talk about your life. People are turned off by smugness and arrogance, so assuming everyone around us loves us unconditionally is a big risk.

You're In Every Single Photo

Whenever you post photos on Instagram, Facebook, or Twitter, you're in all of them. Yeah, you traveled to Europe or Asia, but instead of taking photos of the hundreds of amazing landmarks, you wound up photobombing every single site. It's okay to appear in some photos so your friends will know you were there, but don't be surprised if people raise their eyebrows at the fact that you can't take a pic if you're not in it.

You Always Make Sure To Be The Focus

You always make sure to be the main focus, even at the most inappropriate times. A user on Quora best explains what some of the signs you might be full of yourself can look like. "I was at a bridal shower once where the maid of honour decided to try on dresses she was considering wearing later that evening."

You Fish For Compliments

You look at a star and say, "I used to sparkle like that when I was younger," and expect someone to say that you still sparkle. You might even diss yourself and say things like, "This dress makes me look absolutely horrible!" Obviously, you're hoping that they'll tell you that you're wrong, and this is the only time you'll allow them to do just that.

You Always Try To One Up People

If they suffered a horrible car accident and broke their leg, you one up them and tell everyone you lost both legs and became bionic. If they tell you that they ran a marathon, you remind everyone about that time you ran a triathlon. If they passed a math test with a 97, you remind them that you got a perfect score once, and got a full-blown 100.

You Don't Have Empathy

To have empathy you have to be able to get inside someone's head and see an issue from their perspective. That's the only way you can show you truly understand what they're going through. But you're above that. So when your friend canceled on your friend date because their mom died a week ago and they're bummed, you lash out and end the friendship.

You are so self-absorbed that you end up sucking the life out of every social interaction because you're too busy talking about yourself. You don't allow anyone to change the subject or put their two cents in. You're also bombarding them with your personal drama and you don't care that they may have problems of their own.

You Make Others Uncomfortable

You go on and on about how everyone at work adores you because you've been a great boss to them since you got a promotion. But people are so bored that they start staring at the bug on the wall, their coffee cups, or they look at each other and roll their eyes. But they won't make eye contact with you. Ever. It's as if they're trying to mentally leave the room.

It doesn't matter how many achievements you've made in your life, you always want more. You want a bigger house, better friends, a hotter partner. The list goes on and on. Only problem with being an overachiever is that nothing will ever be good enough for you. It's not that other people are conformists, as you like to call them. It's that you feel empty without all those things you claim you "need".

You see the slightest criticism of your actions as a personal attack, so you get extremely defensive. You swear on the life of your future children that you're incapable of making a mistake. This leads you to get into fights with your significant other, your friends, and even your supervisors because you took things too personally.

You Set Unrealistic Goals For Yourself

Goals helps us to strive towards major achievements, but you're so full of yourself that you think you're Superman. There's nothing you can't do, so you set unrealistic goals in a futile attempt to come off as superior. But when you fail, you not only embarrass yourself, but the fall from grace is ten times higher and more painful.

You're an egotist, and like any good egotist you believe that you can manipulate others by throwing compliments at someone to get them to do what you want. But it won't take long for the people you treat like dogs to catch on. Eventually, no matter how many complimentary bones you throw at them, they'll stop respecting you.

You're The Only Winner

You see life as a game, and there are only two types of players. You've got the winners and the losers. But from your point of view, there can only be one winner, and that's you. As far as you're concerned, everyone else is a failure who slithers like vermin beneath your feet. But there's always someone better than us, which leads to you feeling frustrated and defeated.