Squirrel Returns to Thank Woman Who Saved Its Life, and Her Reaction Is Priceless

Camila Villafane
Squirrel Returns to Thank Woman Who Saved Its Life, and Her Reaction Is Priceless October 1, 2018 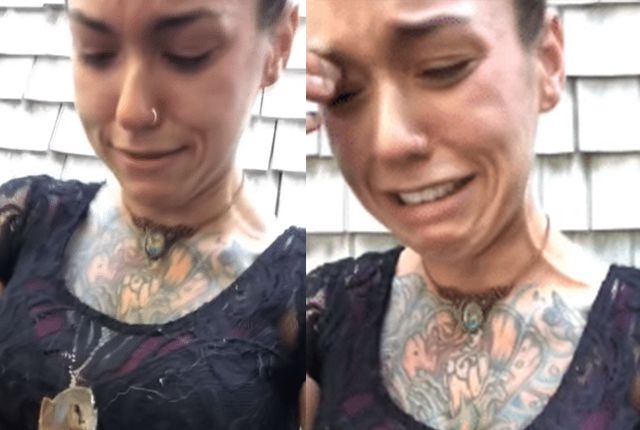 Saving a life can be a thankless job, especially when you’re helping an animal which can’t express itself with words. But who would have lived to see the day that a squirrel thanked the woman who saved its life? Sheila Mattie of Massachusetts wouldn’t have believed it until it happened to her. Mattie's maternal instincts kicked in when she found the fuzzy-tailed squirrel suffering from an injured paw. She healed and rehabbed the critter, and thought that was the end of the story. But they pair had bonded more tightly than Mattie could've known...

No one seems to have a definitive answer to this question, and yet, any pet owner would tell you that animals are capable of expressing happiness, sadness, fear, and anger. But can they express gratitude?

The Only Emotional Animals

It would be extremely arrogant of humans to assume that they’re the only ones capable of expressing emotions. So, when a dog wags its tail or a cat purrs, it may very well be expression joy. But how can they be entirely sure?

Animals have all sorts of ways of getting into trouble, especially when they’re in the wild. But before we talk about how one Massachusetts squirrel thanked the woman who saved his life, let’s talk about how five squirrels ended up proving that animals are capable of being grateful just as humans.

Five juvenile Gray Squirrel siblings got their tails all tangled up in the nesting material their mother used. They were stuck with each other, and they couldn’t break free.

They Were Knocked Out

Once the squirrels were brought into the Wildlife Rehabilitation Center at the Wisconsin Humane Society, vets anesthetized the squirrels and began to delicately separate them, which wasn’t easy.

Once they were untangled, the vets worked on treating the tissue damage to each of their tails. Fortunately, with some medical attention, the squirrels had a shot at a second chance.

“We're happy to report that all five squirrels are now very active and vigorous, happily eating all that we’ve offered, including nuts, seeds, and fruit,” the center wrote on their Facebook page. But not everyone gets the benefit of veterinary care.

There are some animals out there who have to fend for themselves against natural hunters as well as unkind humans. In a few cases, help will likely never arrive for these unfortunately injured creatures.

So, we go back to the age-old debate, do animals feel the same emotions that we do? Can they experience fear when they’re in trouble? They likely do, and when that happens, they look to humans for help.

In August 2018, Sheila Mattie received a surprising phone call from her friend, who told her that he found two baby squirrels, who were quite likely orphaned. Mattie’s maternal instinct kicked in to full gear!

Animals can’t rely on their fellow creatures to treat them when they’re injured. So, that’s where human compassion comes in to play. But while an injured animal might lash out with fear, they’ll likely change their tune when they feel better.

Mattie’s friend, Kristen, took one of the squirrels while Mattie kept the other one for herself. But it wasn’t doing so well. In fact, it had suffered an injury, and needed some serious TLC.

According to her Facebook page, Mattie’s been working as a barn hand at Crimson Pointe Farm in Middleborough, Massachusetts, since April 2016. So, she was more than happy to help the little guy out.

He Was Messed Up

“He had a broken paw when I got him, couldn’t eat with his hands and he also would walk on his wrist instead of his paw,” Mattie shared on her Facebook post. He also needed a cool name too.

Nursing Him Back To Health

Mattie named him Crash Bandipoop, after a character that’s super popular in video games. That was the easy part. But nursing the squirrel back to his old self was going to take a little more work.

In less than no time, Crash was doing amazingly well. “Coming to terms that my little man has made an insane amount of progress since I saved him,” Mattie wrote on Facebook. Naturally, the two became inseparable.

The bond between Mattie and Crash grew stronger with each passing day. It got to the point where the squirrel wouldn’t take his eyes off of his foster mom. But he also split his attention with two other creatures.

Crash adored Mattie, but whenever she needed a break, he had plenty of extra company. He got along great with Mattie’s 5-year-old daughter, and their dog, Diesel, who was a Great Pyrenees.

“He now eats with both hands and can jump to and from (almost) anywhere,” Mattie happily reported on Facebook. The little guy had really won her over, and it was like he was part of the family too.

What Could Have Been

If Mattie hadn’t taken him in, Crash might have had to fend for himself. But squirrels need their paws to climb up trees to escape and look for food. He wouldn’t have been able to do either of these things with a broken paw.

“I love him to pieces and his little personality is like no other,” she explained. They had a great time together, but all good things must eventually come to an end, and Mattie knew this.

Animals Can Be So Grateful

If an animal is capable of feeling emotions, then gratitude is part of the package, especially after someone goes out of their way to get them out of a terrible predicament, like she did!

Don’t Be A Stranger

“Gotta release him soon and I’ve got knots in my stomach thinking about it,” she wrote on Facebook. Letting go was the worst feeling in the world she hoped that she hadn’t domesticated the little fellow too much.

Mattie eventually released Crash, and didn’t see him for an entire week. But she worried that he wasn’t prepared for life in the wild and that he’d met an untimely end. Then something shocking happened.

Days later, Crash showed up at Mattie’s back porch, and she became emotional at the sight of him. The squirrel thanked the woman who saved his life by showing her that he had survived in the wild and that he hadn’t forgotten about her.