The Strangest Photos Taken In The Airport

Sarah Knieser
The Strangest Photos Taken In The Airport July 6, 2020Leave a comment 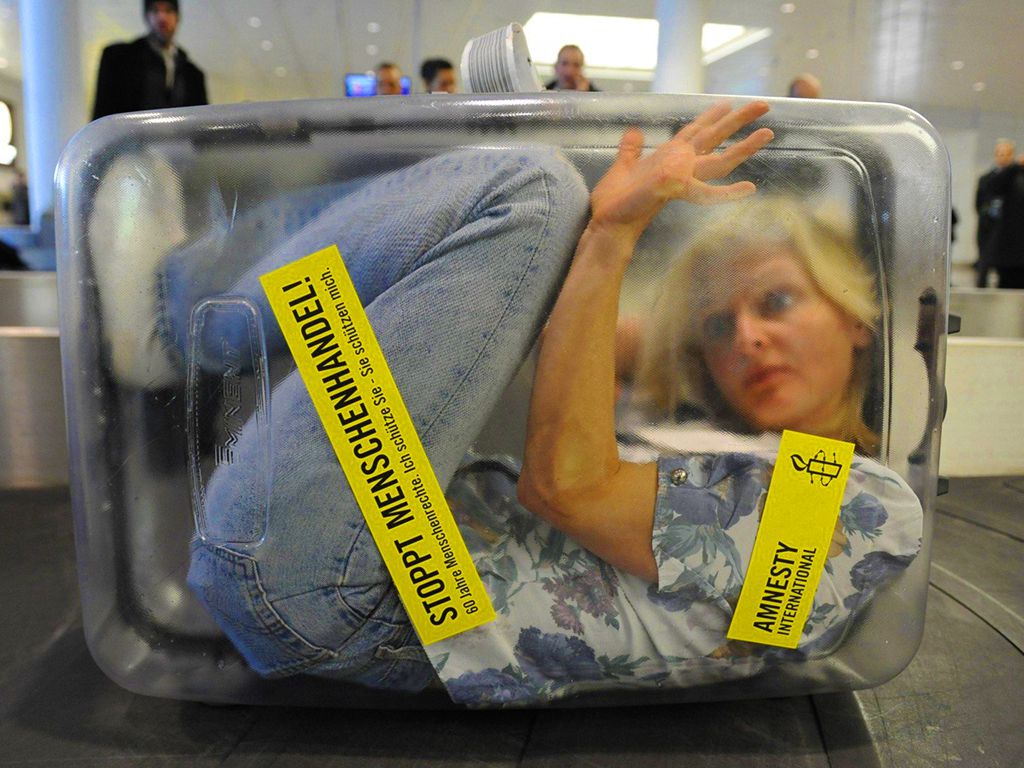 The stress and anxiety caused by a trip to the airport can result in some pretty strange behavior. The airport is one of the last places you can really be an anonymous witness of the strangest things that people actually do in public.

Everyone has seen someone take off their shoes during a flight or wear their pajamas to the airport, but that is only the beginning of the weird things that people do at the airport.

These two strangers found each other at the airport in December, both repping their Christmas style. When you find your twin in the wild, it's only polite to take an incredible selfie with them.

A woman in the airport who was trying to take a selfie accidentally snapped this incredible picture first. The custodial worker noticed the woman pointing her phone her way and stuck an incredible pose!

Movie Time with the Kids

When one couple was on a long layover, the girlfriend lost track of her boyfriend in the endless airport, only to find him enjoying a Pixar movie with a group of kids. That's how you know he's a keeper.

I Hope That’s Not My Pilot

This is the last thing you want to see before you board your flight. Even though people with impaired vision can still be pilots, it's not a great sign that he needs a guide cane to make his way through the airport.

What an adorable accident! It's hard to even tell which puppies are sleeping and which are stuffed animals. If you get to share a flight with six puppies in the future, know that you're a very lucky person.

One stunned person got the surprise of her life when her mom sent her this photo from the airport. Not only did she see rapper Waka Flocka while waiting for her flight to board, but they seemed to have gotten along pretty well!

A Mind for Good Ideas

It’s almost impossible to find an open charging port while you’re waiting at the airport, but if you’re smart enough to look in uncommon places for an outlet you can get lucky like this man. He is really showing his genius genes by using his head as a table, too.

That’s What Husbands Are For

Traveling together is the ultimate test of a strong relationship. If you’re not comfortable having your significant other use your face as an iPad rest, do you really even love them?

It might have been terrifying for Rebecca to scan the airport and not see her father waiting to pick her up, but the fear most definitely turned into embarrassment once she saw that he was wearing a Darth Vader costume to pick her up!

The Dad look is practically a uniform. If your dad wears glasses and button up shirts, don’t even be surprised when you run into his doppelgänger in a crowded area!

Trying to Get Comfy

There are no comfortable chairs in the airport. Not a single one. Maybe this is to stop people from lingering at their gate or falling asleep while they’re waiting, but it’s odd nevertheless.

If you're traveling through a major city, you're bound to see a celebrity or two wandering through the airport just like you on a busy afternoon. But, they'll probably be dressed to impress, like model Sophie Turner was.

Even entertainers need to fix up their costumes now and again. Luckily this airport has a shoe-shine, otherwise these robots would be performing covered with rust. I hope they left a nice tip.

Snape, Is That You?

It’s weird to see your own doppelgänger at the airport and it’s even weirder to see a celebrity doppelgänger! This ominous and sad-looking airport employee looks eerily like “Harry Potter” actor Alan Rickman in character as Snape. There’s dark forces at work at this airport.

Using an airport bathroom is stressful enough when you don’t have any creatures eyeing you while you do your business. Thankfully this nosy creature was cute, though.

This photo was taken by a pilot, who showed how he and his friends at the airport like to take advantage of their off-hours. Airports really aren’t as boring as you’d think if you get to work there!

We’ve all had a delayed wintertime flight and even the tiniest gesture of kindness can lighten your spirits when that happens. This airport employee probably brightened a few people’s day with their snow smile.

If you’re going to have an emergency, just don’t do it here. At least, that’s what the employees at this airport want you to know. However you decide to stop your life-threatening emergency is up to you, though.

After a horrible storm and delayed flight, this pilot was the only employee left at the airport to help passengers with their luggage, so he assisted his passengers hands on with this kind act.

You’re lucky if your kid sleeps through a flight, but you’re really lucky if they sleep through the trip through the airport, too. Just don’t check her in with the carry-on luggage!

There are always a few people on every flight, usually in first class, who have an array of designer suitcases and bags. But when one of those bags gets lost by the airline, it’s gonna sting a lot worse!

To find true comfort while waiting for your flight, block out the world around you by entering resting ostrich pose. Just make sure to come up for air before you miss your flight entirely.

Sharing a Seat with Nicolas Cage

Imagine this woman’s surprise when the person who bought the seat next to her turned out to be actor Nicolas Cage. He seemed too worn out from whatever trip he is taking to be as excited by the chance encounter as she is.

If you find yourself in an airport without a neck pillow, instead of paying airport prices for a new one just use all of the luggage you’re already carting around to rest your head on!

Dressed to the Nines

Nobody dresses up to go to the airport anymore, or so everyone’s grandparents complain. But some people still like to make a statement when they know they’ll be in a crowd, like this fantastic pink cowboy.

Her Carry-on is a Bit too Heavy

There is no way to successfully sneak your contortionist best friend onto a plane. Even if they can fit into the suitcase, good luck with those strict carry-on luggage rules. There’s no way he’s gonna make it in checked luggage!

Flying in a plane is much safer than driving in a car, with only about 20 accidents reported in air traffic per year compared to 10 million automobile accidents. But, that doesn’t mean that it doesn’t happen sometimes!

This family is probably on their way back from a vacation and has already gotten so sick of traveling home that they’ve stopped talking to each other entirely.

Picking someone up from the airport is a gesture that comes with few rewards. One of the only ways to make it worth your while to make the trek to pick up your friend is to absolutely humiliate them while you’re waiting!

The last thing you want to see on the tarmac is a polar bear, because that will definitely cause some delays for your flight. Unless this is Alaska Airlines, because that might just be your pilot!

He’s certainly the fluffiest pilot in the sky, but he does get distracted when the in-flight concessions come around. When you land, instead of applauding he prefers that his passengers call him a good boy!

Even Worse Than a Pat Down

If you’ve ever wanted to see what’s inside the bag scanner at the airport, this may be the only way to do it. But, don’t be surprised when there’s a much worse fate waiting for you on the other side for breaking the scanning machine.

What You Don’t See During Lift-Off

In a competition on the television program “Man vs. Beast” 44 little people competed against an Asian elephant to see who could pull a jet plane farther. Unfortunately for these people, the elephant won.

Fasten Your Seatbelts For Nap Time

One way to ensure some rest while you’re waiting for your flight is to completely disrespect everyone else waiting by taking up four seats. But, this is probably the only way you’ll get some decent shut eye at the airport.

Last Call for The Beastie Boys

Dad of the Year

It’s tiring enough traveling alone, but it’s several times worse traveling with small children. If you see a passed out dad covered in stickers at your terminal, show that great man some respect.

On first glance, this may seem like a major wardrobe malfunction, but it’s actually just the worst possible color that a neck pillow can be. And, the worst placement for it too. Just a perfect storm of accidental lewdness.

This man was watching the newest “Avengers” movie when he turned around and realized that he had a small audience forming behind him. Their parents obviously didn’t teach them that it’s rude to stare.

This may be the smartest man at the airport. Not only did he choose the best possible footwear for a day at the airport, but his photo on his bag assured that it will never be lost or stolen.

It’s not everyday that you see a celebrity at the airport, but if they look this sad it’s best not to approach him. Maybe Weird Al’s accordion was too big to take as a carry-on.

Don’t pick someone up from the airport in a costume because you’ll be stuck in an uncomfortable get-up all day. Always opt to celebrate an alcoholic beverage holiday instead, your family will thank you.

Sticks and Other Lumber Must be Checked

It’s a wonder why whoever checked their stick didn’t take it as a carry-on. But, if this was just one of their belongings, they probably had some woodworking tools to take on the plane with them.

Some people might mistake her for a stewardess, but Maria Petersson is a Swedish pilot whose travels take her around the world. To keep herself sane while she’s grounded she often practices yoga around the airport.

Last Flight to the North Pole

If you’re stuck at the airport for a few hours by yourself, there’s no better time to don a costume, become a character and embody their personality! No one will even ask to share your chocolate covered spaghetti.

“I Only Date Models”

This young boy proved that he chose the right day to wear this tee-shirt when he bumped into Victoria’s Secret model Rosie Huntington-Whitely at the airport. She was kind enough to take this perfect photo with him, which will no doubt be used as his profile picture forever.

Airports are usually places filled with stressed-out adults and crying babies, so seeing two completely joyful kids enjoying their day of traveling is a rare moment. All of the onlookers with their cameras out are catching a once-in-a-lifetime moment.

Children always leave a few of their toys behind while they’re traveling, like one kid who left an army man figurine to guard the charging station at the terminal. No one will be trespassing on their charger now!

The Only Free Blankets at Your Terminal

This look screams, 'do not talk to me.' Even if this guy missed his flight he seems secure enough in his newspaper fort to not worry too much about it. Just don't tell him to return the luggage cart.