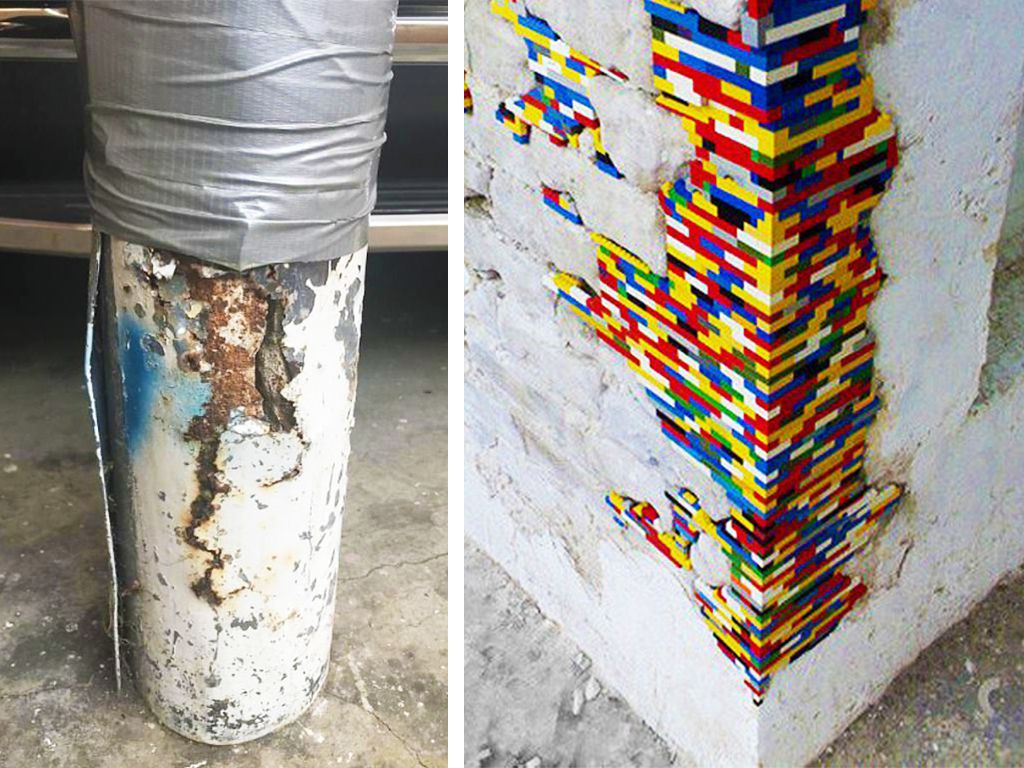 A Los Angeles-based company called Alpha Structural, Inc., has been in the business of building foundations for structures and making repairs to them. And over the years they’ve stumbled on some major construction fails. So, they’ve shared some photos that seem to defy construction laws and regulations. These bizarre structural findings are so weird, you'll have to do a double take.

A Crack in the House

Inspectors never know what they’ll find in North Hollywood. Maybe they’ll walk in and find a crack in the walls of a house. Other times they’ll find a crack on the floor. Clearly, this was caused by earthquakes, which is fairly common in California.

Foam Was Used to Stop This Collapse

While only a temporary measure, someone used polyurethane foam to keep that brick pressed against that rock. But Alpha Structural inspectors knew right away that this home could still collapse at any time.

They Found an Ancient Skull

While performing an inspection on a property, the folks at Alpha Structural discovered a human skull, which the home owners had apparently brought over from Peru. But don’t worry. A detective coroner found that it was about 1,000 years old.

This is Why the Floor Was Declining

They say a home needs solid legs to stand on, but the wooden leg on this side of the house is resting unevenly against that concrete on the ground. And all it would take is a minor earthquake to cause that leg to slip, causing the whole house to sag.

This Property is Hole-y

This might not be a holy site, but it certainly has a hole under the concrete of this property. And while there’s no way of knowing how it got there, it has all the premises of a good horror flick.

Those Stairs Are on Their Last Step

The support beam keeping those stairs and that deck in place seems to have been plastered against the wall of this home. And if too many people start standing on that deck, it can all come down in one horrific moment. Why? Just why?

This Was a Hit and Miss

There’s a reason the nails went in without a hitch. These nails totally missed their mark. Did they know what they were doing or did they just get “board” with the process and decided to pretend like they hadn’t made a mistake?

This House is Practically Floating

Most people don’t believe in magic, but it’s hard to deny it after an Alpha Structural inspector discovered that virtually all the piers and posts under this house were not holding the house in place. So basically, the house was hovering in mid-air.

This Building Got Tired

All homes require a good solid foundation, but whoever thought tires would make a good substitute was way off. And obviously, no building inspector has stopped by here to enforce building codes in years.

The Wood is Rotting

Shoddy construction can often lead to the wood in a home being exposed to the elements. In this image, the wood has been touching the dirt for so long that it has absorbed moisture from it and has started to rot away.

A Wall of Washing Machines

This wall took recycling to a whole new level. Instead of trashing a bunch of old washing machines, someone decided to use them to create this makeshift wall to stabilize the property’s foundation. Yikes!

This Sloping House is Cracking Up

According to Alpha Structural, “there is a slope starting from the right and going 15 feet to the left.” Further inspection revealed that the property had sunk down 18 inches from a crack point in the middle of this room.

This Sagging Beam is About to Go

This support beam has seen better days but sadly, it looks like it’s about to collapse at any moment and when it does, it’s going to take half of the house with it, so hopefully the home owner won’t decide to do jumping jacks in their living room.

Alright so it wasn’t necessarily the remains of a human body, but it was still pretty creepy. It looks like the skin of a rat. And while it’s not a structural failure, it’s still a pretty gross thing to discover under a house.

Some might say it’s a work of genius while others might say its sheer laziness. Regardless, someone decided to keep this house from caving in on itself by using a car jack. Who knew these devices could be used in home construction?

Talk About Living on the Edge

It’s a good thing this East Los Angeles home has been abandoned. Judging from how close it is to this eroded foundation, it looks like it could collapse from the slightest quake.

This is Why Their Floors Are Saggy

No wonder their home has saggy floors! The foundation is on top of two bricks which seem to be on the verge of sliding away. This is like that point in a Jenga game where everyone knows that the tower is about to collapse.

Although retaining walls are used to support and restrain soil on a slope, this one has a massive crack. So, anyone who parks their car next to it is risking their car suffering some serious damage if that wall collapses.

This Back Patio is Living on the Edge

Anyone hanging out in this back patio is literally living on the edge because most of is hanging off from this hillside. And judging from foundation’s level of erosion, partying out here would be a bad idea.

Where do we begin with these stairs? Should we start by talking about how horrible the edge on the left side looks or how there's a crack starting to form in the top middle. But that’s nothing compared to the massive crack on the right side that extends all the way down the staircase.

The Middle Column is So Eroded

Columns like this one tend to give inspectors cause for concern because the metal is so eroded that it’s on the verge of crumbling . Fortunately, the other two columns sandwiching the damaged one appear to be holding the structure in place.

They Found a Huge Gas Pipe

When they started doing some excavating on this property, everyone almost had a blast— and not in a fun way. That red cable is a gas pipe and one little nick would have caused everyone to go boom!

This Apartment Complex is on the Brink

It looks like wooden support frames and plywood are the only things keeping this apartment complex afloat. The foundation’s construction is so shoddy that the slightest hit could cause everything to come crumbling down.

There’s a Honeycomb on a Carcass

While inspecting the bottom of this house, someone from Alpha Structural discovered something that looked almost out of this world. But actually, it was a honeycomb built on the remains of a deceased animal.