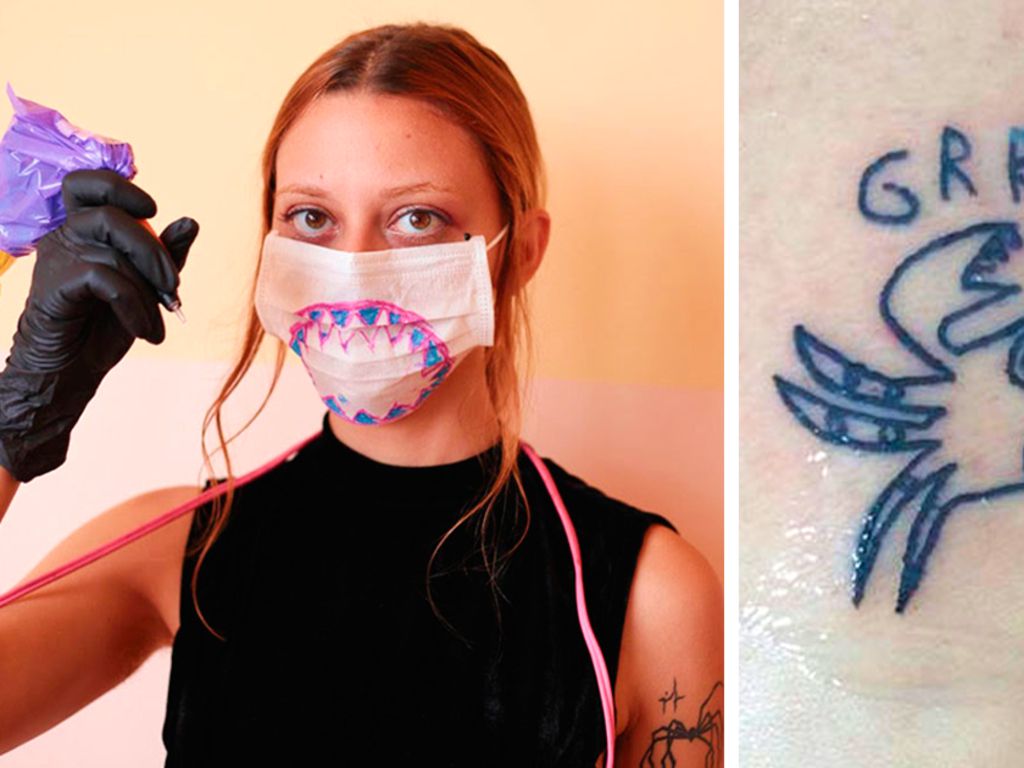 We all know a bad tattoo when we see one... right? Sometimes a picture is worth a thousand words and should remain that— a picture. Here are a few, or more than a few, times when a tattoo didn't come out the way it was meant to.

How cute. This tattoo of Mr. Julius Pringle had so much potential. And this is potentially the easiest reference in the history of references! We're not quite sure what the artist was thinking as he drew this, but we have a feeling it has something to do with acorns. Check out the mustache.

Instead of resembling the bombshell in her swim-attire, this tattoo looks more like the blow-up doll version of Marilyn Monroe. The girl knew it and complained—hard. The con-tattoo artist was fined for close to 300 Euros and no longer tattoos anyone.

We have no idea who this person in the tattoo is, but the reference photograph speaks volumes. There is shading where shading shouldn't be and the neck looks as if it's ready to pop off. As far as memorial portraits go, they did their best. Teeth are hard to draw.

Yes, this is meant to be Betty Boop. Yes, she might be missing a few key elements—a mouth here, a leg there. Or is that her other leg wrapping around her torso? Poor Betty.

There have been many versions of the Joker during our lifetime, but none quite looked like this. Then again, this tattoo might be a purposeful exaggeration. If it is a caricature, it sure is a frightening one.

Simba and Mufasa in 'The Lion King'

You know father and son Mufasa and Simba from "The Lion King." This is not them. Well, it might be, but the linework is so off it's difficult to distinguish the skin-irritation from the shading.

If you're a fan of boy bands, then you might know who Aaron Carter is. He supposedly got this tattoo as an ode to a GQ magazine cover where Rihanna is dressed up as Medusa. If this is meant to be Rihanna as Medusa, then we're seeing a lot of snakes and flames and not a whole lot of Ms. Fenty.

Honestly, this tattoo could pass as Harley Quinn. But maybe an apocalyptic Harley Quinn, where she has muscles for days, doesn't fit her clothes, and her skin is a shade of light-purple. For crying out loud, the pigtails aren't even colored in.

This tattoo is supposed to be the Charmander Pokémon. You know, the orange dragon with flame-throwing capabilities? This guy tattooed himself while he was inebriated, which explains the lack of resemblance—for the most part.

This tattoo is meant to be Tiffany Valentine, the murderous doll in the "Chucky" horror series. The tattoo artist was so close. The hair is right and the black ensemble is perfect, but her forehead wasn't that wide, was it?

It's so easy to destroy an easy design reference. Linework is of the utmost importance. It's difficult to tell if the sun in this tattoo is using a pacifier or if it's sleeping. Either way, the tattoo itself looks exhausted.

The first thing that comes to mind is the "Toy Story" characters Woody and Rex. But there's no way this is them. Maybe whoever wanted this tattoo wanted a generic version of a cowboy and a dinosaur. A version where eyes aren't exactly where eyes go on either a person or a dinosaur.

These aren't regular music notes. Oh, no. These are spooky music notes. Whatever the spin might be, there should still be a tattoo standard of how a chord is drawn onto the body. Straight lines, for instance, or maybe proper shading.

Nothing about this tattoo screams Elvis Presley, but according to the rest of the tattoo— it is "in memory of" the king of rock 'n' roll. We aren't buying it. The hair is the selling point of Presley and there is nothing special about the man's hair in this tattoo, among other qualities it's lacking.

Timon and Pumbaa in 'The Lion King'

The iconic Disney duo, Timon and Pumbaa, are known for their phrase "Hakuna Matata." The phrase means "no worries," which is what the artist must have been thinking as they inked away. Either that or this tattoo is meant to look like a child's drawing.

What's cooler than a tattoo of Angelina Jolie's "Tomb Raider" days? A tattoo that looks nothing like Angelin Jolie in "Tomb Raider." This tattoo doesn't seem like any effort was truly put into it. There's more details in the guns she's holding than her hair that seems to be dripping down her face.

Lilo's companion in "Lilo & Stitch," Stitch, is possibly one of the cutest tattoos that represent how big of a fan you are of children's animation. Unfortunately, this particular rendition of Stitch doesn't hit any kind of mark, except for the fact that the little guy is blue. Other than color, this tattoo comes off as more creepy than nostalgic.

Drawing a half man, half animal creature has got to be difficult in itself. The reference photograph of the centaur gives us a better idea of how close the artist really was when they bestowed this challenge upon themselves. They got a little carried away with the fur…

There is a Brazilian tattoo artist who is known for their poor drawing skills. This Spiderman tattoo is an example. And while, yes, it might seem adorable and you might still know what it's supposed to be, it doesn't look like Peter Parker. Kudos to the cute spider next to Spiderman with the hearts coming out of him. At least, we think it's a spider.

Another design reference that's easy to destroy if the artist manipulates it in the wrong ways is the moon. Whether this moon tattoo depicts an eclipse of sorts or those are actually craters, the bad part is that we can't tell. Tattoos should be straightforward to someone. If we don't get it, then hopefully the person with the tattoo does.

You don't have to be a botanical whiz to know that this flower doesn't look its best. We believe the artist meant to draw a lily, but we're not 100% sure. It definitely has sea creature potential.

Hello Kitty isn't just any kitty. She is world renowned. This tattoo, though, could be any kitty with an oddly misshapen bow. Everything seems a little skewed as if the artist was sitting sideways or tilted their head the entire time they were drawing.

We didn't believe it either. This rock icon deserved far better representation or at least better linework. If you didn't know better, you could confuse this tattoo of Freddie Mercury with a tattoo of any regular-joe. There aren't many people with square heads, though, including Mercury.

Pikachu doesn't look quite finished. The tattoo of the famous Pokemon is faded and appears more like the sketch before the tattoo than the tattoo itself. If only the lines were straight, we'd have a better idea of what we're dealing with.