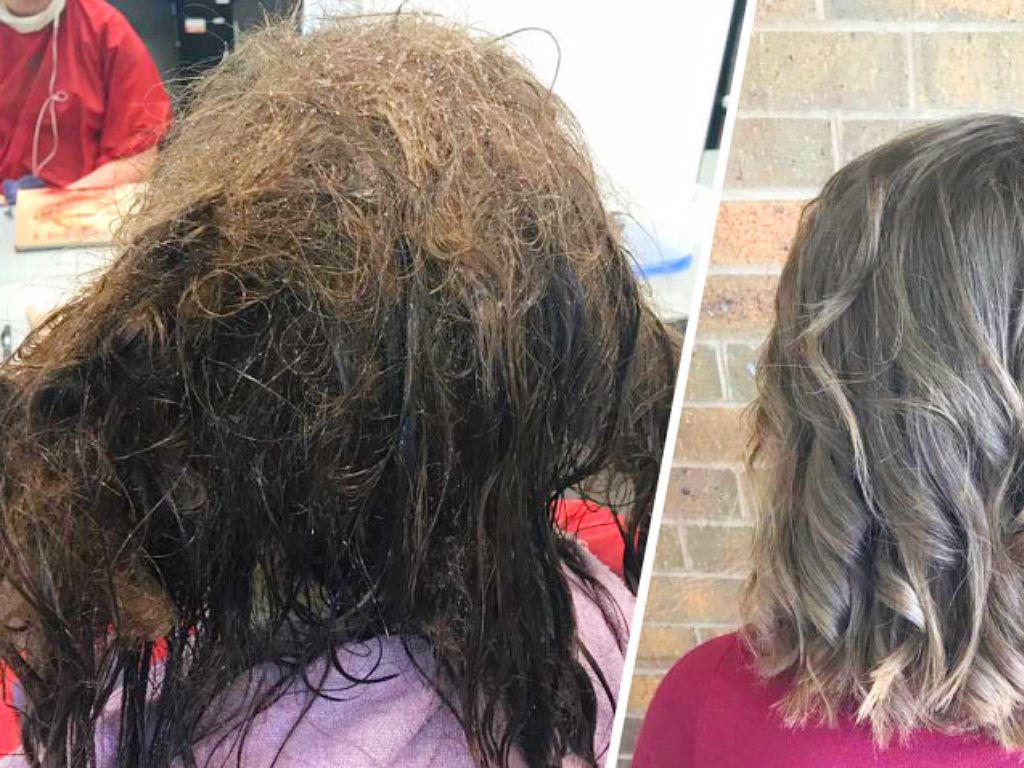 In 2017, a teen suffering from depression took the first step in healing her mental health when she bravely got out of bed and sought help. Surprisingly, the support she received was found at a local hair salon, when two caring hairdressers gave her the help she deserved that would boost her self esteem and ultimately change her life.

When a teenager from Iowa suffering with depression felt too worthless to leave her bedroom, everything seemed unimportant. The effort of getting out of bed was immensely tough for her, let alone taking care of her personal hygiene.

She Was Too Depressed to Leave Her Bed

The painful reality of depression interfered with the teenager's abilities to leave her bed, except for when she had to use the bathroom. Over time, lying in bed caused a complex tangle of issues for the young woman.

She’d Given Up On Brushing Her Hair

The teenager couldn’t even carry out day to day routines like combing her hair, and so, as she lay in bed everyday without brushing it, her long hair soon matted together into a thick mass that was impossible to deal with.

She Began to Seek Help

One day, the 16-year-old decided enough was enough and felt that in order to feel better, she first needed to fix the problem with her hair. She didn't even care if the only solution was shaving her head bald. She then paid a visit to the local beauty school hoping someone could help her save at least some of her hair.

She Wanted to Get Her School Picture Taken

When she arrived to her local salon, the teenager explained to the hairdressers that picture day at school was coming up. She suggested to them to cut off all her hair because she didn’t think it was possible to comb out the tangles, nor did she want to experience that pain.

The Hairdressers Believed They Could Save Her Hair

The hairdressers in the salon feared that it would be a complex mission, but they were up for the challenge. "Cutting her hair was absolutely not a option for me," one of the hairdressers said in an interview. "I knew right then and there that we had to keep as much hair as possible."

The Hairdressers Didn’t Know How Her Hair Became So Knotted...

At this point, they didn’t know how the teenager’s hair got in such a matted mess, but once they started to work on her they learned the distressing reason behind it all...

One Stylist Was Willing to Help

The skilled stylist who eagerly decided to help the teenager was 20-year-old Kayley Olsson from Capri College, a beauty and cosmetology school in Iowa. The trainee hairdresser took one look at the matted mane and knew she had a difficult task on her hands but nevertheless, jumped on the opportunity to help the teenager and began to work her magic.

The Two Began to Bond

Later in an interview, Kayley remembered how the teen confided in her about her depression as she began to detangle her hair. Kayley explained how the 16-year-old "felt so down and so worthless she couldn't even brush her hair, she only got up to use the restroom."

A Colleague Stepped In To Help

Kayley’s fellow hairdresser, Mariah Wenger, also came to the rescue as she was eager to help the teen feel better about herself. Once the 16-year-old was sitting in the salon chair, she began to bond with the hairdressers and share with them the dark details of her depression.

One of the Hairdressers Knew How the Teenager Felt

Supporting and helping the teenager was close to Mariah’s Wenger's heart as she too understood what it was like to suffer from depression. "I was able to very closely relate to her mental health problems and the daily struggle that comes with them, due to my struggles with postpartum depression and anxiety," Wenger explained in an interview.

It Was Going To Be a Long Day

Kayley Olsson and Mariah Wenger knew they had to be patient with their new client as this was clearly no ordinary day at the salon. They both knew that this job would take all day and possibly even the run into the next day but they were determined that the final outcome would be worth it.

A Difficult Task at Hand

Although Kayley and Mariah had their hands full, they were sympathetic towards the teenager and her story. Feeling vulnerable and embarrassed, the young woman was in the best care as her hairdressers were compassionate and understanding, which was just what the 16-year-old needed.

The two women spent an ambitious 10 hours over two days combing through the teenager’s matted hair. "It took a lot of encouraging words, reassurance, and just plain conversation to take her mind off of the pain involved in removing the matting and to boost her self esteem and confidence,” Mariah explained.

Both Stylists Helped to Lift the Teen’s Spirit

Both women knew they were on the verge of helping to boost the teenager’s self esteem. "I understood how it felt to feel worthless— a child should never feel like that,” Mariah asserted. In an interview with the BBC, Kayley reflected on the importance of cheering others up, "I knew I had to help her, just like people helped me. We all deserve to feel beautiful."

The Hairdresser Shared the Story Online

After Kayley encountered the 16-year-old, she felt compelled to share her experience online. In a Facebook post she wrote, "Today I had one of the hardest experiences— I had a 16-year-old girl come in who has been dealing with severe depression for a few years now." She explained how she helped the teenager and shed some light on the reality behind depression.

Kayley Olsson’s post was shared over 55,000 times online, which showed the harrowing truth behind depression and mental illness. She explained how the teenager, who she kept anonymous, "felt so down and so worthless she couldn't even brush her hair, she only got up to use the restroom."

Since posting her experience on Facebook, Kayley’s post has received over 60,000 comments with people sharing their own stories of struggling with their mental health.

Floods of Praise and Support Were Shown on Social Media

Facebook users commented words of praise for the teenager’s bravery and also for the hairdressers. They celebrated the women’s patience and compassion for the 16-year-old as well their unquestionable skills with a comb.

The Comments Just Kept Pouring In

One woman on Facebook commented on her similar experience when suffering with depression, "It's happened to me - I suffer with bipolar and had an episode and didn't brush my hair or take care of myself - just remember beautiful girl you're not on your own."

Matted Hair Is Not Uncommon Among Sufferers of Depression

It makes sense that when someone is suffering from depression, the last thing that person is concerned about is maintaining their appearance. The comments under Kayley’s Facebook post explain the reality of this, "I work with mental health and good for you. I see this daily it's sad but so true," one person commented.

The Teen's Hair Turned Out Perfect!

The teenager's hair was transformed into fabulous, silky locks and people took to Facebook to commend both hairdressers. Facebook users applauded their understanding that their client was dealing with more than just knotted hair, the teenager was really suffering from lack of motivation due to her depression. "You are awesome to recognize this as a mental issue and also for giving her back her dignity by fixing her hair issues."

Hairdressers Need to Be Empathetic

It’s important for anyone working in the beauty industry to have compassion for clients, as most of the time people go to salons and spas to correct insecurities that they have, so hairdressers must be warm and attentive to their clients, and Kayley and Mariah were exactly that.

"I’ve been in this position and I can't tell you how comforting and important it is for a hairdresser to be kind and understanding. I wasn't judged either and got my hair back to being beautiful, " one woman wrote.

The Teenager Left the Salon Smiling

After tears of joy were being shed between the three women in the salon, the teenager left the salon that day feeling like a more energetic version of herself. When saying goodbye to the hairdressers, the 16-year-old cheerfully called out, "I will actually smile for my schools pictures today, you made me feel like me again."