These Are the Wives and Girlfriends of the World’s Billionaires

Matthew Loffhagen |June 22, 2022
These Are the Wives and Girlfriends of the World’s Billionaires June 22, 2022Leave a comment 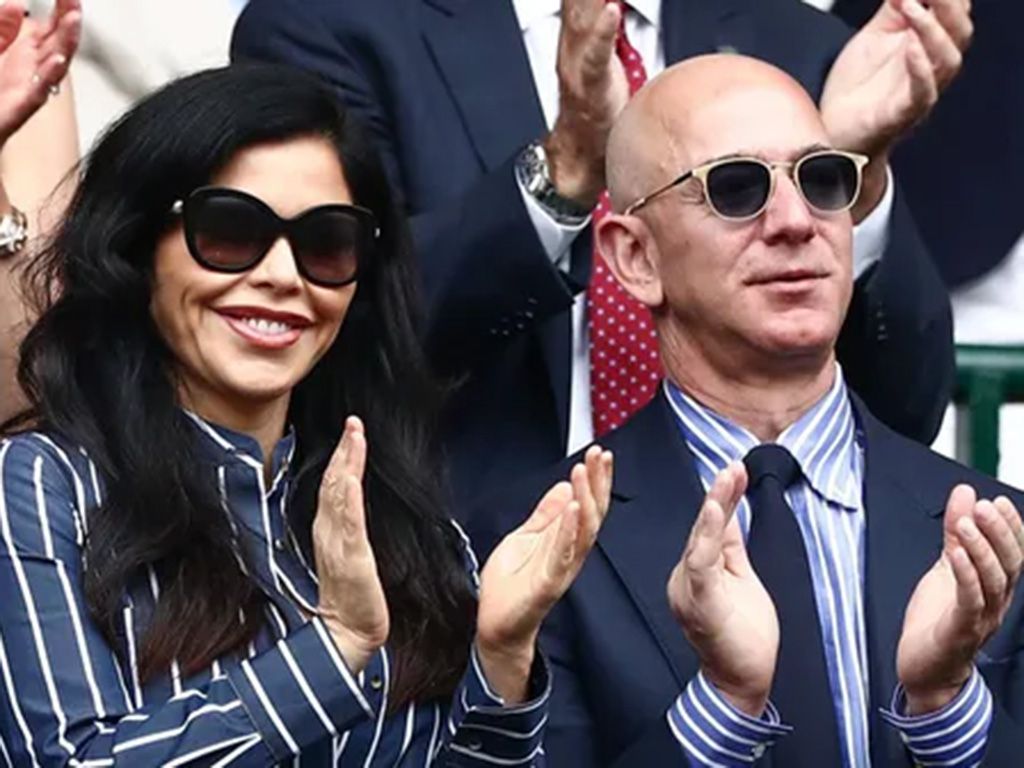 There is no one model for a billionaire, each obscenely wealthy person is unique in the way they made their money and the way they spend it. Similarly, no two wives or girlfriends of wealthy billionaires are alike: some are models, some are tech geniuses, some are entrepeneurs, some are relatively normal people. The only thing they have in common is access to lots and lots of money.

Salma Hayek may be married to French business mogul François-Henri Pinault, who has a net worth of over $43 billion, but she's far more famous for her successful acting career, having been nominated for an Academy Award for her portrayal of Frida Kahlo in the 2002 movie "Frida."

Lucy Southworth is a very smart woman, with a Master of Siences from Oxford University in Data Analytics, and a doctorate in Bioinformatics from Stanford. She's also married to Larry Page, co-founder of Google, with a net worth of over $50 billion.

At one point, Tina Ambani's husband, Indian business mogul Anil Ambani, was worth over $60 billion. The former chairman of the Reliance ADA Group claimed in 2020 that he now has a net worth of $0, but these claims are subject to dispute.

The wife of Facebook co-founder Mark Zuckerberg, Priscilla Chan is a former pediatrician who studied at Harvard and the University of California. She is now primarily engaged in charity work.

Miranda Kerr is a fashion model and businesswoman. She was previously married to Orlando Bloom, but in 2017 married SnapChat CEO Evan Spiegel, who has a net worth of approximately $3.1 billion.

Nicole Schuetz is married to Kevin Systrom, co-founder of Instagram (hence her nice, pithy Instagram handle). The pair are worth an estimated $1.5 billion.

Nikita Kahn has been dating Larry Ellison, the fifth richest person in the United States, for well over a decade. Ellison is worth over $60 billion. Kahn is an actress and interior designer.

Entertainment reporter Lauren Sánchez has had an illustrious career as a journalist. In 2019, rumors began circulating that Sánchez was romantically involved with Amazon's Jeff Bezos. Following Bezos' divorce from MacKenzie Scott, the pair have been regularly seen together.

Ricky Lauren is the wife of Ralph Lauren, and has been described as his "silent partner" by the New York Times for all the work she does for the family fashion brand behind the scenes. The pair have a net worth of over $6 billion.

Joan Templeman and Virgin CEO Richard Branson have been married for over thirty years, which is an impressive run for a pair of billionaires. The family has a net worth of around $4 billion.

Nicole Shanahan is a tech entrepeneur, whose specialty is legal technology. In 2018, she married Google co-founder Sergey Brin, and the pair have had a child together. Brin is worth $89 billion.

Model and influencer Dasha Zhukova is dating Russian oligarch Roman Abramovich, who is worth an estimated $9 billion.

Stephanie Seymour is a model and actress who was previously a Victoria's Secret Angel. She is married to magazine publisher Peter Brant, who has an estimated worth of between one and two billion dollars.

Claire Elise Boucher (better known by her stage name, Grimes) has had an on-again, off-again relationship with Elon Musk for several years. The pair have two children together. Musk is worth over $200 billion.

Penny Knight is the wife of Phil Knight, co-founder of the Nike sports clothing brand. The pair are worth over $60 billion.

The wife of Michael Dell, of Dell computers, Susan Dell is a philanthropist who co-founded the Michael & Susan Dell Foundation, which provides aid to children in poverty. The Dells are worth an estimated $60 billion.

Wendy Schmidt is the wife of Eric Schmidt, former Google CEO, worth over $19 billion. She oversees the Schmidt Family Foundation, which holds over a billion dollars in philanthropic assets.

Katsia Zingarevich is a former Victoria's Secret model who is married to Russian oligarch Anton Zingarevich. The pair have three children together.

Jade Foret is a Belgian model who is married to French businessman Arnaud Lagardère, whose net worth peaked at $2.5 billion (although his prospects have since dropped significantly).

Model, actress and television host Kristy Hinze is married to James H. Clark, a Silicon Valley tech mogul who is estimated as being worth $2.5 billion.

Kirsty Bertarelli is a model and songwriter who was previously Miss UK. She is married to Swiss businessman Ernesto Bertarelli, who is worth an estimated $8.5 billion.

Claudia Barilla is married to Guy Laliberte, the CEO of circus troupe Cirque du Soleil. He is estimated to be worth around $1.2 billion.

Gabi Holzwarth is a talented professional violinist who previously dated Uber CRO Travis Kalanick. The pair split in 2016, and Holzwarth has since moved on with both her career and family life. In March 2022 she gave birth to a baby boy, Oliver.

Julie Chen Moonves is a TV personality, news anchor, and producer. She is married to Les Moonves, CEO of CBS, and she is regularly involved with the production of CBS programming.

Fabiana Ecclestone is married to Bernie Ecclestone, the 91-year-old British business magnate who was previously the chief executive of the Formula One group.

Tamiko Bolton is married to George Soros, a billionaire who was described by Forbes as the world's "most generous giver" for his efforts to donate his wealth to worthy causes. While Soros' full fortune would be well over $40 billion, the pair have a net worth of around $8 billion due to Soros' efforts to redistribute his own wealth.

Suzanne Ircha is married to Woody Johnson, the co-owner of the New York Jets, who also served as ambassador to the UK under Donald Trump. The pair have a net worth of around $5.7 billion.

Andrea Hissom is married to Steve Wynn, founder of the Wynn chain of casinos and hotels. The pair have a net worth of $3.3 billion.

Sonia Tudor Jones and her husband, hedge fund manager Paul Tudor Jones, have a net worth of over $7 billion. The pair are involved in a lot of philanthropy work, but have held onto more than enough money to still stay comfortably in the billionaire club.

Kate Capshaw is a painter and actress, best known for her portrayal of Willie Scott in "Indiana Jones and the Temple of Doom." She is married to Indiana Jones director Steven Spielberg, who has a net worth of over $3 billion.

Jerry Hall is a former model and actress who appeared in the 1989 movie "Batman," and was previously in a relationship with The Rolling Stones frontman Mick Jagger. She is now married to Rupert Murdoch, head of the NewsCorp media empire.

Julia Koch is the widow of oil tycoon David Koch, who died in 2019. Having inherited a net worth of over $40 billion, she is among the top five richest women in the world.

Two years after the death of his first wife, Susan Thompson, billionaire Warren Buffett married Latvian immigrant Astrid Menks. With a net worth of $115 billion, the pair are not exactly strapped for cash.

Diana Taylor was the New York Superintendent of Banks from 2003 to 2007, and was New York City's de-facto First Lady from 2002 to 2013 thanks to her long-term domestic partnership with Michael Bloomberg.

The wife of former U.S. President Donald Trump, Melania Trump was born in Slovenia and worked as a model prior to her involvement in politics.

Mellody Hobson is a businesswoman who is currently a chairwoman at Starbucks and was previously chair of DreamWorks Animation. She's also married to George Lucas, who is estimated to be worth around $5 billion.

Padma Lakshmi is an author, activist, actor and model. She was previously married to the author Salman Rushdie, but is now married to Theodore J. Forstmann, who has a net worth of around $1.6 billion.

Singer and musician Janet Jackson was previously married to Qatari retail entrepeneur Wissam Al Mana, who has a net worth of around a billion dollars. Jackson's net worth now, for comparison, is around $190 million.

Mackenzie Scott was married to Amazon founder Jeff Bezos from 1993 to 2019. She received a significant divorce settlement of around $35.6 billion in Amazon stock, and is now worth over $60 billion. She has since remarried Dan Jewett, a school science teacher.

Elaine Andriejanssen is married to Facebook co-founder Eduardo Saverin. The pair live in Singapore, and have a net worth of around $9 billion.

Alexandra Lenas Parker is married to Sean Parker, the co-founder of Napster. The pair have two children, and a net worth of $2.8 billion.

Beyoncé Knowles is worth a cool half a billion dollars on her own, but her husband, Jay-Z, is comfortably in the billionaire club thanks to some shrewd investments.

Fashion designer Chloe Gosselin has been in a relationship with illusionist David Copperfield since 2006, and the pair have a child together. Rather than designing magic tricks, Gosselin designs shoes.

Holly Valance is an Australian singer and actor who is most famous for her role in the 2008 Liam Neeson movie "Taken." She is married to Nick Candy, a British property developer who is worth over $2 billion.

Talulah Riley is an actor who has appeared in a variety of movies and television shows including "Inception," "Thor: The Dark World," "Doctor Who," and "Westworld." She was married to Elon Musk not once, but twice, having divorced in 2012, remarried in 2013, and then divorced again in 2016 after a period of separation.

Melinda French Gates divorced her husband Bill Gates in 2021. The pair continue to serve as chairs for their charitable organization, the Bill and Melinda Gates Foundation. Prior to their split, the pair were worth well over $100 billion.

Actor Julia Fox, best known for her debut role in "Uncut Gems," briefly dated billionaire Kanye West following his divorce from Kim Kardashian. She later said that she dated him to "give people something to talk about" during the COVID-19 pandemic.

From 1999 to 2013, Wendy Deng Murdoch was married to Rupert Murdoch, the head of the Australian media empire NewCorp who is now married to Jerry Hall. She is a movie producer and friend of Ivanka Trump.

Kim Kardashian is famous as a reality TV star, and as the ex-wife of Kanye West, a rapper whose net worth is estimated to be around $2 billion. Kardashian is also very wealthy in her own right, being worth around $1.8 billion.