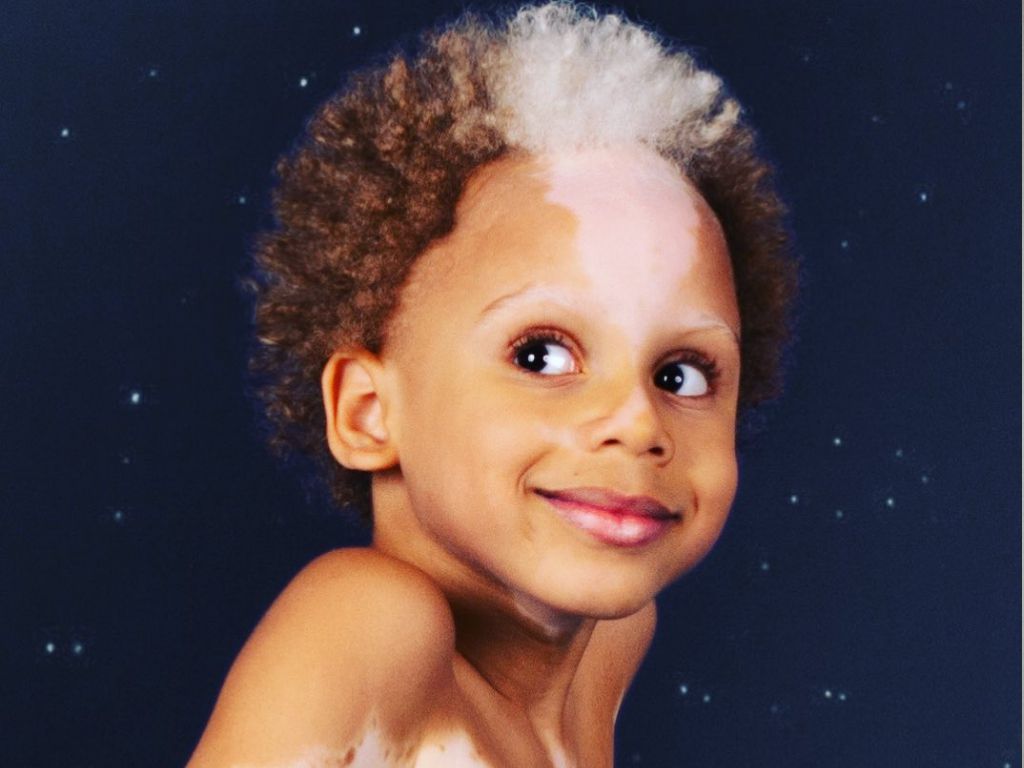 Everyone's body is unique, and some of us have beautiful differences that make us stand out from the crowd. Here are some of the coolest, most impressive, unusual bodies you'll see today...

Jena Amend was born with a condition called hemangioma, which is a kind of large red tumor that grows on the outside of the body. In Amend's case, this appeared on one of her fingers, and after years of treatment, the entire finger was removed. The result is that she stands out from the crowd with her cartoon-like hand having just four fingers, which works perfectly fine and is even her dominant arm.

On the other end of the digital spectrum, this woman has polydactylism, which means she has an extra finger. This is not uncommon— it's suspected that Anne Boleyn, one of King Henry VIII's wives, had this mutation. It's often completely harmless, and just makes you a bit better at playing video games.

This man's beautiful hair is a result of a condition called Waardenburg Syndrome, which unfortunately does have negative side effects— he's deaf in one ear, but at least his beard is really unique!

Shilah Madison has uncombable hair syndrome, which is so rare that that there are only about 100 reported cases in the world. Shilah’s mother Celeste has mentioned that “her daily routine of taking care of hair is a long and painful one. We minimize brushing unless it’s really needed.” She posts photos of her daughter on Instagram to raise awareness for the condition and teach others how to manage similar hair.

Victoria has segmental vitiligo, meaning the patches of skin that don’t have pigment only affect one area of your body. Segmental vitiligo is less common than other types of the condition and it can occur at any point in your life. For this woman, “one morning I woke up to a few white hairs in my right eyebrow. I didn’t think much of it since it was only a few hairs to begin with.” On the emotional side of the condition, Victoria has shared that, “On the outside I might look confident with my vitiligo, but that’s not always the case on the inside.”

Some people have longer toes than others. This Taiwanese student has shared photos of her foot next to her hand, and has also shown how she has quite an impressive range of movement with her finger toes. Useful if you ever need to pick things up off the floor!

The tuft of grey hair on baby MilliAnna is due to a condition called poliosis. Her condition is likely hereditary because her mom sports an identical patch of white hair on the front of her hairline as well. About her daughter’s hair, mother Brianna said, “I plan to raise my daughter knowing she is beautiful and special and to not listen to people’s mean comments.”

Model Sarah McDaniel has stated that her heterochromia iridum appeared a few weeks after she was born and it wasn't until she started her modeling career that she really felt comfortable in her skin. Although her eyes are completely stunning, she has stated that if she could change it, she would. McDaniel told StyleCaster, "I’ve always wanted green eyes. I think that’s the most rare, interesting color."

Here's a cool example of two of these conditions— Samuel Silva has vitiligo, which causes the skin to lose some of its pigmentation. While anyone can have vitiligo, it's most notable in people with darker skin, and in Silva's case, he also has piebaldism, which has produced a really gorgeous stripe of white hair to go with his beautiful face. It's no wonder he's become a popular child model!

Redditor Iamurcouch here shows off his incredible forked tongue. This is often a result of being slightly tongue-tied; not badly enough to restrict speech, but enough to pull back on the center of the tongue slightly, creating a really cool snake-like appearance.

The so-called "Miracle Baby" Eli Thompson won widespread internet fame in 2015 when he was born without a nose. His online profile grew rapidly as his fans fell in love with this adorable child and his very unique set of challenges, including feeding and learning to speak. Sadly, Thompson passed away in 2017, but he will be remembered by his many fans for years to come.

Reddit user wubwub789 has a very desirable mutation. Distichiasis is a rare condition that causes several layers of eyelashes to grow next to each other. The result is bushier, fuller lashes without any need for mascara.

Webbed toes are by no means uncommon, nor do they tend to cause any problems most of the time. While their ability to help a person swim faster is debatable, it's not like most people can move their toes independently anyways.

Sara Jiminez Galan is another person who has piebaldism, which causes the front part of her hair to grow without color. What's not to love about looking like one of the X-Men without having to visit a salon?

Chameleon eyes! It's not too uncommon for humans to be able to move their eyes independently, although it is a bit weird to watch for anyone who's not used to seeing a lazy eye in action.

The simply stunning Winnie Harlow has vitiligo, giving her skin a distinct pattern that's unique only to her. While vitiligo is common, and often can be seen on people's faces around their mouths, everybody is different, making for a skin pattern that is one of a kind.

Redditor netperiod was born with five fingers on each hand instead of thumbs. This was the least of his worries as a child as he was also born with a heart defect, but has now grown to be a perfectly healthy adult.

Many people have birthmarks, but Alba Parejo has a lot more than the average person. She's so invested in reducing stigma around birthmarks that she's become a large part of the Bare Your Birthmark social media movement, which encourages people not to be afraid of the things that make them different.

Oram-Holt syndrome can cause the body to develop in strange ways, often resulting in too few bones growing in hands and feet. Each case looks unique, with this case resulting in just two fingers growing on the person's left hand.

Polycoria is a condition in which the eye grows a second pupil on top of the first. Sadly, having two pupils doesn't mean having super eyesight - instead, this can often cause a person to develop limited vision, and has been linked to a series of other eye-related illnesses. At least it looks distinctive.

Redditor animaorion shared this adorable picture of his newborn son who, to everybody's surprise, appears to be a genuine elf. This is a developmental abnormality that plenty of people wouldn't mind having!

On a related note, Amino user tarmiesty_tars has shown off pictures of her braces, which she got to straighten her natural vampire teeth. This will probably cause her to lose some credit in the goth scene, but it'll hopefully make it easier to lure unsuspecting mortals to her lair.

Bodybuilder Ia Östergren has unusual proportions. Her legs are abnormally long, making up over half her height. While she's just 5'8″ tall, her legs are 3'5" long, essentially giving her the proportions of a Barbie doll.

Evita Delmundo was bullied as a child for the unusual number of moles and birthmarks that cover her entire body. As she got older, she decided to really own her unique skin, and even auditioned for the Miss Universe beauty pageant.

101-year-old Zhang Ruifang of the Henan province in China astounded people when she grew a horn on the top of her head. Cutaneous horns are a well known phenomenon, and can be removed with surgery, but hey, if Zhang isn't bothered by her headlump, why should she be forced to have it removed just to fit preconceived standards of beauty?

This baby has polymelia, which causes the growth of extra limbs while in utero. Not all children born with polymelia are lucky enough to have two perfectly formed extra arms - this actually looks like it might be really useful, provided the child doesn't have any other symptoms from the condition.

Ah, the perennial classic, the third nipple. Supernumary nipples are not at all uncommon - this man's "nubbin," as Chandler Bing would call it, can be seen on his left breast, and like many third nipples, is a lot smaller than his other two. It's also not unheard of for women to have a third fully formed breast.