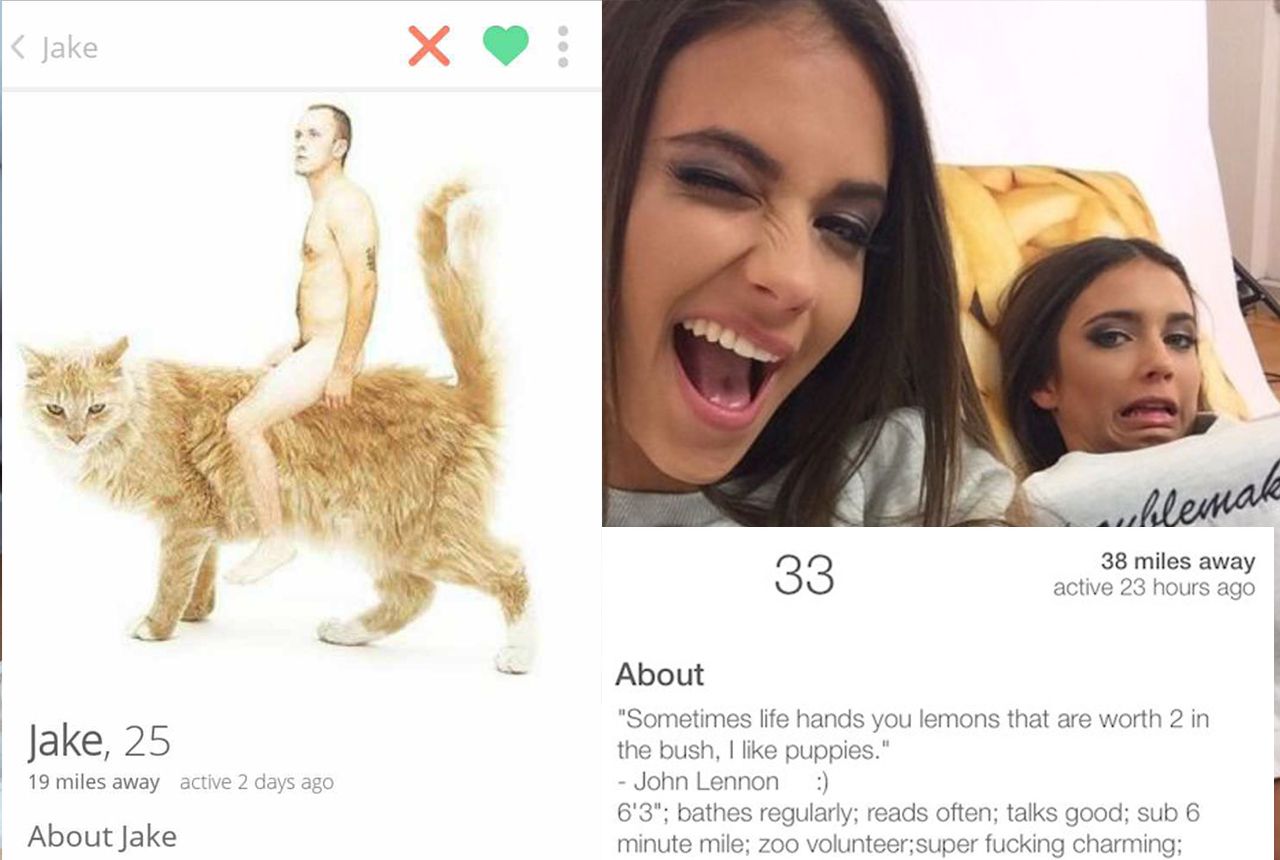 Dating people in the real world can be time-consuming and a bit difficult sometimes. But can Tinder really increase your chances of meeting your soul mate? Well, that probably depends on how realistic or unrealistic your expectations are. The truth is that you may not find an exact match, but as long as the other person has a good sense of humor, that's all that matters. But there's a fine line between humor and insanity.  Check out these weird Tinder profiles. They may be wacky as hell, but they are also so freaking weird, they'll make you crack up in a beat! And everyone knows that laughter is a great way to get potential hookups to swipe right.

Tinder can make dating a lot of fun. Who knows? You might wind up with a guy like this one, who is clearly hung like a horse... cause he's a Minotaur, you know? Hopefully, he's not exaggerating, because that would be disappointing. Also, he bathes regularly, which is a total bonus in anyone's book.

Don't let her name fool you. She's the kind of girl you'd want to bring home to your mother. Plus, she's charming, and can fit big fruits inside her mouth. Also, she likes D, as in the letter D. But if you happen to have a D, it's possible that she'll know what to do with it.

Her name's Rachel. She's 20, and she lives a mile away, and she's not afraid of sinking her teeth into a delicious burrito. But if you're not into Mexican food, then good luck ever meeting this beauty in real life. It's also your loss because if she can put a whole burrito in her mouth, imagine what she can do for you. Yeah. I said it.

A Jurassic Sense Of Humor

If you're a speed reader, then the first line will likely make you swipe left from Reginald. But if you take a moment to read, you'll see that he has a gigantic sense of humor. Then again, that was obvious from his profile photo. But if you value your Pet rock collection, you might want to find someone else.

Jake loves to ride around naked like Lady Godiva. But instead of a horse, he uses a big old p**sy. And if you swipe right, he might step off and give yours a shot. Plus, he's got the clearest skin you've ever seen on a grown man, and he'll probably get off work early just so he can go out on a date with you.

There's Nothing Wrong With Him

This guy loves to put a duck's head on, dress up like a taco, and then shake his Caracas while taking a selfie in the bathroom. All pros in our book! Plus, you'll only come second to his Tamagotchi pets. But you might have a chance at being first in his life if you can make him seem normal in front of his family.

Seriously, people! You'll have to get in line for Harrison. There are so many women with a leopard fetish swiping right, that Tinder's servers are crashing. Oh, and he has a killer jumpsuit that is bound to make an impression on everyone if you take him with you to the gym.

If you're looking for a date who will take you out to dinner, then you're out of luck with Veloci. But on the plus side, he'll make you lunch and eat you out, so there's that. But if you survive the encounter, don't complain about it to Tinder because he was totally honest about being a dinosaur.

His Side Chick's A Mannequin

James' other ride is made of plastic, so chances are you've got a shot if you're made of flesh and blood. Plus, he's got a great sense of humor, at least you hope he was joking about the LSD, or the time he spent dragging around a life size doll outside of a fast food restaurant.

Chelsea will shock you, and that's what you want in a relationship. You need someone who will come out of nowhere and surprise you, which she'll definitely do since she seems to have a gift for reverse photobombing people. But your Snapchat skills better be as on point as your Tinder profile if you want to grab this queen's attention.

The Boy Who Would Be King

Oh, awesome! This whole time, women have been calling guys immature, and here you have Chris, who's 22 and acting like a man child. Fortunately, he's got great abs and is wearing a crown like a true king. Hopefully he can appeal to someone's maternal instincts so they can get him off Tinder and he can stop whining.

Among a sea of weird Tinder profiles, you've finally found Waldo, which proves that you're invested in long-term things, like relationships. Oh, and he's so relieved because as long as he has his arm wrapped around you, he'll never go unnoticed in a crowd ever again. Just don't let go or he'll get lost again. You know how he is! Scatterbrained much? Ugh.

His BFF Is An Alien

You will always come second in Aaron's life, but with this Tinder profile, he'll probably come alone, unless ET's glowing finger has some kind of magical power that got edited in the original movie. If ET really is life, as he claims on Tinder, then why is he looking to go on a date?

Some awful guys might try to slip something into your drink. But Afshin's got a different approach. He's honest about his plans and he's giving you two options. But honestly, joking or not, it's kind of creepy to get a guy on Tinder who's offering to give you a red or blue pill. But if you're a risk taker, go for the red pill. Sounds like the kind of date you'll never forget!

You're In Deep Poo

You thought you had seen the worst of the weird Tinder profiles ever, but you clearly missed the one with Ford dressed up as Winnie the Pooh. Poor guy, doesn't he know that the way to a girl's heart doesn't involve letting her know that he's possibly in a butt load of debt? Cool shades though!

The One Who Loves Himself More

Good luck ever being number one in his life. That slot is already occupied by himself, and it looks like it may stay that way for a while. Ahmed loves himself so much that his profile shows him hugging a big photo of himself.  But those hypnotic eyes might be worth swiping right for one date at least, (even though you know how this is going to end!)

Yoshi is totally saucy on his profile and he loves to splish splash while he's taking a bath, but there doesn't seem to be a whole lot of space in that tub for two people. Okay, maybe you can make it work, but you might want to let him know that you don't feel comfortable drowning in a tub.

Looking For A Transitioning BF

Sydney isn't a gal who is necessarily looking for love. What she wants in a man is someone who will simply stand there and look pretty while she's performing the Fergilicious music video that is playing in her head. You'll relieve her stress, and who knows? She might relieve the stress in your head to thank you.

Pete may have too much baggage for most Tinder users to handle. For one thing, his profile suggests that he's a bit of a mama's boy, but that's not even the worst of it. You'll also have to deal with the extra baggage that is his wife, and they'll both make you pay for dinner and drinks. So if you're looking to go on an adventure, THIS is the couple to swipe right to.

So You're A Star Wars Fan?

There's nothing wrong with William being a huge fan of "Star Wars". People need a break from reality once in a while. But hopefully, when he invites you out on a date, it won't involve taking a seat in the basement at his parent's house while he wows you with the latest "Star Wars" movie in 3D.

Alexandra knows that you're not really interested in her. You want a woman that's a bit more mature, but still looks hella hot. And that's okay. She's willing to step aside in order to let her mom score for once. But Alexandra still wants to meet you to make sure you'll make a good stepdad.