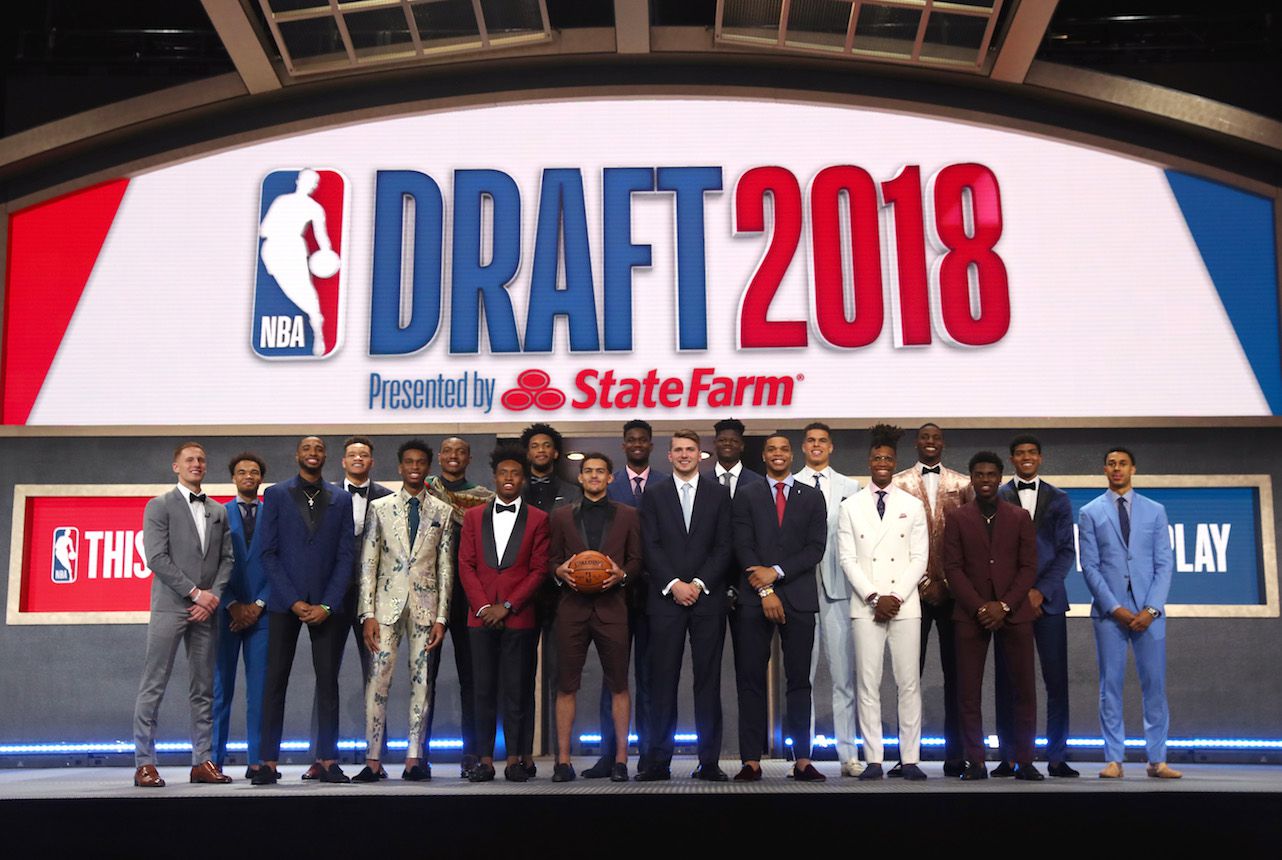 The 2018 NBA Draft gave many hoops heads their first live look at everyone's new favorite Slovenian star, and her son happens to be pretty good at basketball. That son is teenage European superstar Luka Doncic. He somehow managed to dodge playing for the lowly likes of the Phoenix Suns, Sacramento Kings, or Atlanta Hawks. That was thanks to an aggressive trade by the Dallas Mavericks, one of draft night's two major deals. Click through our 2018 NBA Draft grades to see how we think your favorite team fared in this year's draft.

Trae Young and Luka Doncic possess a lot of the same skills. The difference is about a half a foot and about 40 pounds, which is no small matter. Still, the Hawks traded Doncic to the Mavericks for the No. 5 pick (Young) and the Heat's 2021 first-rounder. After taking the player often compared to Stephen Curry, they took another, Kevin Huerter, who's regularly compared to Klay Thompson at No. 19.

Usually one of the most-mentioned teams in draft-time trade rumors, the Celtics sat tight and still ended up with lottery talent at No. 27. Robert Williams took a surprising tumble down the draft board, likely due to questions about his effort level, but there's no denying the center has the tools to be a valuable contributor, especially to a team who might be losing Aron Baynes this summer.

The Nets didn't have a ton to work with, owning the No. 29 pick from the DeMarre Carrol trade of a year ago. After reported trade discussions, they settled on Dzanan Musa, a young, narrow 6'9" forward with a gunner's mentality from Bosnia. They added to their European small forward depth with Rodions Kurucs at No. 40, who has the tools to be a good two-way wing but has disappointed in his development.

The Hornets moved down from No. 11 to No. 12, and got two extra second-round picks for their trouble. With their first-rounder, they selected Miles Bridges, who has the tools to be a valuable two-way player at both forward spots, with the athletic ability and ball skills to add a slice of valuable upside.

In Wendell Carter, the seventh pick, the Bulls got a center with the rare combination of size, strength, and skill that should complement young sharpshooting power forward Lauri Markkanen. Then at No. 22, they managed to snag one of the last big wings in the class, a valuable commodity, in Chandler Hutchison.

The Cavaliers took Collin Sexton with the No. 8 overall pick, which came to them in the trade that sent Kyrie Irving to the Celtics. It's unclear what the point guard will do well in the pros — he scored a lot in college due to his relentlessness but didn't show much as a shooter, defender, or playmaker. Basically, the Cavs are betting on Sexton's fawned-over work ethic.

The undoubted winners of the draft, the Mavericks took advantage of the ineptitude of the Suns, Kings, and Hawks to swoop in for the best player in Luka Doncic. They shipped the No. 5 pick and a future first-rounder to the Hawks for Doncic at No. 3, worth it for the type of big, strong, skilled playmaking wing successful teams need right now.

In perhaps the draft's most shocking development, Michael Porter Jr. slipped all the way down to the Nuggets at No. 14. With a team already talented enough to make the playoffs, they're a great landing spot for MPJ, as they can stand to give the high-upside forward the year off while he recovers from the injuries that hurt his draft stock.

The Pistons lacked a first-rounder this year, thanks to the trade that landed them Blake Griffin. But they definitely had an archetype in mind with their two early second-rounders, picking up Khyri Thomas and Bruce Brown with Nos. 38 and 42. Both are guard with defense as their calling card, with Thomas offering strong perimeter shooting as well.

The Warriors picked up the type of player they need in Jacob Evans at No. 28 — a tough perimeter defender who, they're hoping, can spread the floor to complement their quartet of stars. He offers almost no upside, but with their books soon to be in cap space hell, Evans will in theory be able to step in and give the team some needed cheap production.

Despite being armed with nothing but a pair of second-rounders, the Rockets managed to snag perhaps the best defensive guard in the class, De'Anthony Melton out of USC, at No. 46. But after that stroke of genius, they took Purdue forward Vince Edwards at No. 52, who has some intriguing skills as an offensive forward but has yet to figure it out on defense despite good tools on that end.

In Aaron Holiday (No. 23), the Pacers found the seemingly perfect backcourt complement to Victor Oladipo. The younger brother of NBA players Jrue and Justin, Aaron is a good defender and shooter at the point guard spot. Holiday may never be a high-end playmaker for others, but that matters less alongside a lead guard like Oladipo.

Armed with two late lottery picks, the Clippers added a pair of guards who appear to be polar opposites. Shai Gilegeous-Alexander has a nearly seven-foot wingspan and uses it effectively as an active defender, but there are questions about his offensive game. Mitchell Robinson, on the other hand, has every offensive trick in his bag but was laughable on defense in 2017-18.

The Lakers took two low-ceiling shooters in big man Moritz Wagner (No. 25) and guard Sviatoslav Mykhailiuk (No. 47), but made an upside play with pick No. 39, selecting Isaac Bonga, a smooth 6'8 wing from Germany who possesses some of the best passing instincts in this draft class.

After weeks of flirtation with trading down from the No. 4 slot, the Grizzlies sat tight and saw the hands-down best defender in the class, Jaren Jackson Jr., fall into their lap. One of the youngest players drafted, the Michigan State big man flashes a diverse set of skills on offense, giving him upside to go with an incredibly high floor. The Grizzlies then doubled down on defense with burly guard Jevon Carter at No. 32.

Despite attempts to get back into the draft, Pat Riley and Co. didn't have a pick this year. Their first-rounder went to the Suns as part of the Goran Dragic trade of 2015. Phoenix then traded the pick to Philly on draft night. The Heat can't really afford to pay anyone right now anyway thanks to their hideous cap situation.

Though he doesn't fit the Bucks' tradition of insane length, Donte DiVincenzo tested as one of the most athletic players in the draft combine following his electric run in the 2018 NCAA tournament, in which he helped lead Villanova to the title. The Bucks needed more playmaking a season ago, and are hoping DiVincenzo can fill that role.

The Timberwolves didn't get much in terms of star potential, but in Josh Okogie (No. 20) and Keita Bates-Diop (No. 48), they landed a pair of three-and-D players who can in theory guard multiple positions, the type of guys a team needs around star talents like Karl-Anthony Towns and Jimmy Butler.

New Orleans lost their first-rounder in the deal that landed them Nikola Mirotic and turned their season around, left with only pick No. 51. Point guard Tony Carr can't guard an overweight toddler trying to get to a cookie jar, but the Pelicans are likely more intrigued by his impressive shooting numbers from deep.

Not yet 19, forward Kevin Knox has the potential to be the steal of the draft. Blessed with great size and fluidity for his frame, the very raw No. 9 pick flashed shooting ability and impressive touch around the rim. Then at No. 36, they took a shot on center Mitchell Robinson, the McDonald's All-American who sat out his freshman year of college under mysterious circumstances.

The Thunder took some interesting swings with their two late picks. Devon Hall (No. 53), projects as a possible three-and-D shooting guard in the pros, the type of player who doesn't need the ball next to Russell Westbrook. Kevin Hervey has insane length (7'3.5") at his height (6'7.75"), but it's unclear what the big-time college scorer's role will be in the pros due to his relative lack of athleticism.

Mohamed Bamba doesn't fit any of the Magic's immediate needs — they already have too many centers and are in desperate need of guard play — but the team isn't good enough to worry about fit right now. With his NBA combine record 7'10" wingspan, Bamba fits Orlando GM John Hammond's MO of betting on insane length — he took Jonathan Isaac last season, and reached for the likes of Giannis Antetokounmpo and Thon Maker when he was with Milwaukee. Potential three-and-D wing Melvin Frazier (No. 35) fits that mold as well.

While many expected the 76ers to play the draft conservatively in the absence of an actual general manager, they were anything but, trading high-floor, low-ceiling hometown boy Mikal Bridges (No. 10) to the Suns for No. 16 and a 2021 first-rounder. That No. 16 pick became raw guard Zhaire Smith, the most athletic player in the draft. With No. 26, they took Landry Shamet, who lacks athleticism but has the shooting and ball-handling to fill a bench role.

The Suns kicked the night off by passing on the best player in the draft in favor of Deandre Ayton, a center with highly questionable defensive instincts. Then it got worse — the team traded the 16th overall pick (Zhaire Smith) and a future first-rounder (Miami's in 2021) to the 76ers for Mikal Bridges, the 10th pick. Bridges has a great chance to be a solid starter, but lacks upside; not a great return for two first-rounders.

With their two picks, the Blazers took a pair of shooting guards on opposite ends of the athleticism spectrum. Anfernee Simons (No. 24) has the moves and explosiveness of a lead guard but last played in prep school IMG Academy in Florida. Gary Trent (No. 37) was a sharpshooter at Duke, but it's unclear how else he'll be able to contribute.

Marvin Bagley (No. 2) should be a productive player almost immediately, but due to questions about his defense and fit at either big man spot, it's unclear if that production will translate to wins. What does it say that three miserable organizations in the Kings, Suns, and Hawks passed up on Luka Doncic while smart teams like the Mavericks wanted to trade up for him?

It feels like every year, a raw athlete with upside falls into the Spurs' lap as opponents roll their eyes and groan. This draft was no different; long, dynamic guard Lonnie Walker (No. 18) fell in part due to injuries during the 2017-18 season. They also snagged talented but incosistent big man Chimezie Metu at No. 49.

Don't look at me like thata, C.J. Miles. You've kinda gotta have a pick to get anything other than an F, and the Raptors didn't. A season ago, they sent their 2018 first-rounder to the Nets, attaching DeMarre Carroll's bloated contract, and the forward responded by reverting to something resembling the player he'd been before signing his huge deal with Toronto.

Utah forwent upside for the safety of Grayson Allen at No. 21, a player who should shoot, work hard on defense, and offer secondary ball-handling. Two slots later, Aaron Holiday, who can offer all that plus better defense at the point of attack, got drafted by the Pacers. Though he's nowhere the tripper Allen is.

At No. 15, the Wizards selected Troy Brown. Possessing good handles and playmaking skills for his size (6'7" with a 6'10" wingspan), Brown is the type of player NBA front offices salivate over right up until they realize the guy can't shoot or defend. If he doesn't figure one of those two out, he might not be in the league for long.