The Best NFL Quarterbacks Who Never Won a Super Bowl 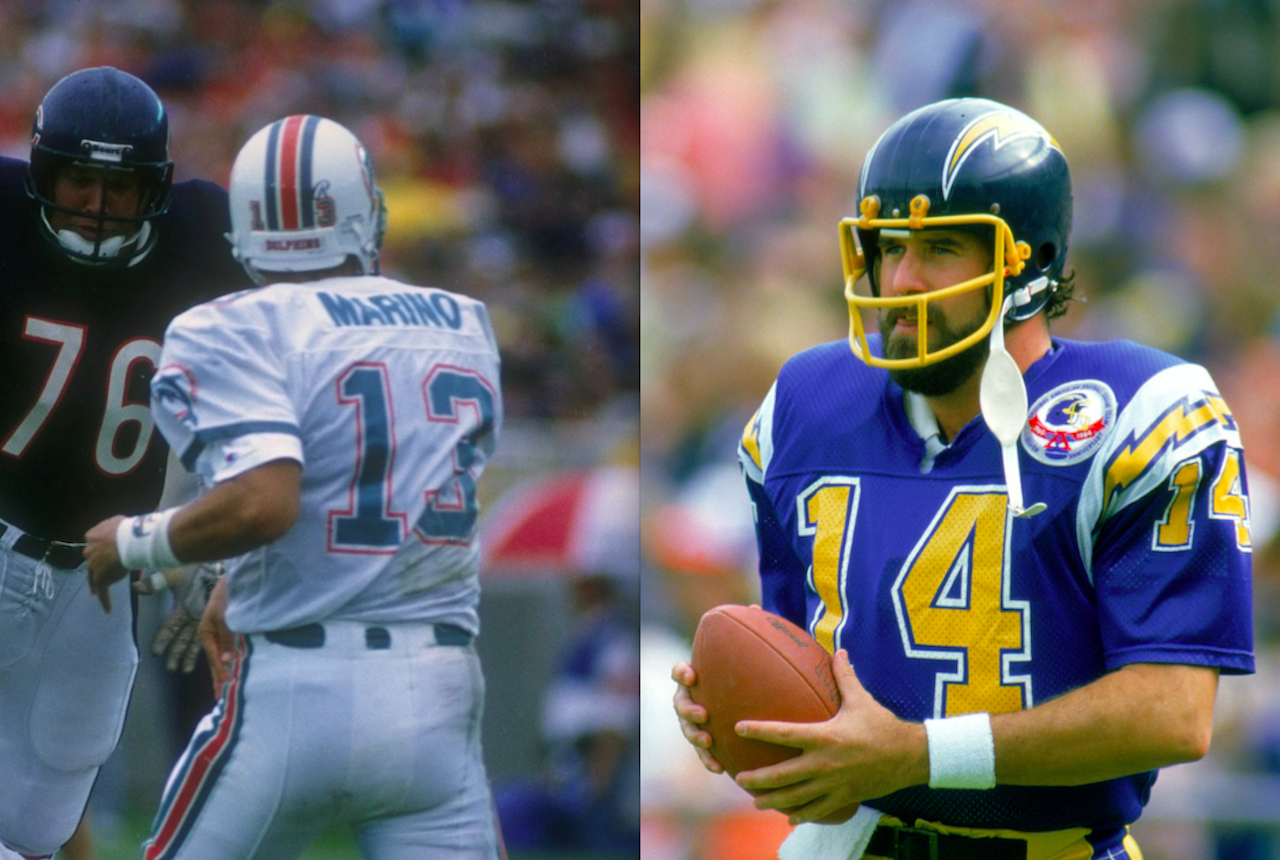 Rings aren't everything. Just don't tell that to Brad Johnson, Trent Dilfer or Nick Foles, mediocre quarterbacks all. But they managed to capture titles as starting signal callers. It's a feat that eluded some Hall of Fame legends who never won a ring. So we're giving some shine to those who accomplished just about everything on the gridiron. That is, except for the ultimate goal. These are the best quarterbacks who never won a Super Bowl.

Lots of quarterbacks had higher peaks than the No. 1 overall pick of the 1987 draft, but Testaverde gets the nod thanks to sheer longevity. His 214 starts at quarterback are tied with Eli Manning for seventh all time, meaning he'll fall to eighth once the 2018 season rolls around

The quarterback helped lead the San Diego Chargers to the AFL championship in 1963, four years before the first Super Bowl. In 1968, he led the league in completions, passing yards, and passing touchdowns, a feat he'd repeat in 1971. He was named to six Pro Bowl squads and one All-Pro team, in 1973.

Krieg blended longevity and efficiency. He made 175 starts in his 19-year career, making three Pro Bowl teams. The longtime Seattle QB led the league in touchdown percentage three times and completion percentage once. His 1983 Seahawks made the conference championship, where they lost to eventual the Super Bowl champions, the Raiders.

[dx_custom_adunit desktop_id="RTK_K67O" mobile_id="RTK_5yk0"] With the help of Randy Moss, Culpepper led the league with 4,717 passing yards in 2004, amassing 39 touchdown passes and 11 interceptions in the process. In the Vikings' seventh game the following season, he tore his ACL, PCL, and MCL. He played in 24 games over the next four seasons before he was out of the league.

Gannon wouldn't be on this list if not for a late-career resurgence upon joining the Raiders at age 33. In his first four years in Oakland, the QB threw 105 touchdowns to just 44 interceptions. He was named the MVP in 2002, when he led the league in completions (418) and passing yards (4,689).

The 1999 NFL Draft's second overall pick started 161 games in his NFL career, going 98-62-1 and learning that ties exist. He led the Eagles to the Super Bowl following the 2004 season, throwing for 357 yards, three touchdowns, and three interceptions in a 24-21 loss to Tom Brady and the Patriots.

[dx_custom_adunit desktop_id="RTK_K67O" mobile_id="RTK_5yk0"] Before becoming a revelation in the broadcast booth, Romo earned four Pro Bowl nods over the course of a 13-year NFL career that saw him make 127 starts, going 78-49 and throwing 248 touchdowns to just 117 interceptions. But thanks to a series of playoff disasters, he never made it past the divisional round.

The 2003 MVP threw 174 touchdowns to 119 interceptions in his 13-year NFL career, rushing in 37 more scores. In his first trip to the playoffs in 1999, he led the Titans to the Super Bowl, where he threw for 214 yards and rushed for 64 more before wide receiver Kevin Dyson was dragged down just a yard short of the end zone in the closing seconds of a 23-16 loss to Kurt Warner's Rams.

The Los Angeles Rams quarterback was named the MVP following the 1969 season, when he led the NFL with 24 touchdown passes and tossed just seven interceptions. But he was 0-2 in his postseason career, falling in the divisional round twice: to the eventual Super Bowl champion Packers after the 1967 season, and to the Vikings two years later.

[dx_custom_adunit desktop_id="RTK_K67O" mobile_id="RTK_5yk0"] The 1970 MVP led the NFL in completions three times, passing yards three times, completion percentage twice, and passing touchdowns twice. The Super Bowl didn't exist for his first 10 NFL seasons, but he had plenty of chances once the Super Bowl era began in 1967. His 49ers lost to the Cowboys in the conference championship in 1970 and again in 1971.

One of the most prolific dual-threat quarterbacks of all time, Cunningham held the record for career rushing yards by a quarterback until Michael Vick broke it in 2011. In 1990, he rushed for 942 yards, the third-highest single-season mark in history for a QB, and he threw 30 touchdown passes to just 13 picks.

Esiason threw for 3,572 yards, 28 touchdowns, and 14 interceptions in 1988, earning MVP honors under center for the Cincinnati Bengals. The four-time Pro Bowler led that squad to the Super Bowl, where they lost to the 49ers — suffering the same fate that the 1981 iteration of the Bengals suffered.

[dx_custom_adunit desktop_id="RTK_K67O" mobile_id="RTK_5yk0"] The 1981 MVP spent the entirety of his 16-year career with the Bengals, leading the league in completion percentage three times, in completions twice, and passing yards two times. He led the NFL in touchdown percentage and interception percentage in 1981, leading that squad to the Super Bowl, where they lost 26-21 to the 49ers.

Jurgensen might have won a Super Bowl had the big game been invented earlier. He made 67 of his 147 career starts in the Super Bowl era and carried the 1960 Eagles to an NFL title. He led the league in passing yards five times and in passing touchdowns twice in his Hall of Fame career.

[dx_custom_adunit desktop_id="RTK_K67O" mobile_id="RTK_5yk0"] Despite playing long before the era of high-powered passing offenses, Tarkenton is still 11th in all-time passing yards (47,003) and sixth in all-time passing touchdowns (342) as of the summer of 2018. The Hall of Famer led the league in completions in three of his last four seasons, including his final year, when he was 38.

The Hall of Fame quarterback led the Bills to a record four consecutive Super Bowls, losing by one to the Giants in January 1991 before getting blown out of the next three big games. He led the league in completion percentage and passer rating in 1990, then threw an NFL-leading 33 touchdowns a season later.

The Hall of Famer led the NFL in passing yards for four consecutive seasons, starting in 1979, and led the league in passing yards per game in five of six seasons from the same starting point. He led the Chargers to consecutive conference championships in 1980 and 1981, falling to the eventual Super Bowl champion Raiders that first year.

[dx_custom_adunit desktop_id="RTK_K67O" mobile_id="RTK_5yk0"] In just his second year, Marino set NFL records for touchdown passes in a season (48) and passing yards (5,084), which were eventually topped by Peyton Manning and Drew Brees, respectively. That year, he set AFC Championship Game records by throwing for 421 yards and four touchdowns in a win over the Steelers. Both marks still stand, but his Dolphins got crushed in their next game, which would be Marino's only Super Bowl appearance.