The Best NBA Finals Teammates Kobe Bryant Ever Had 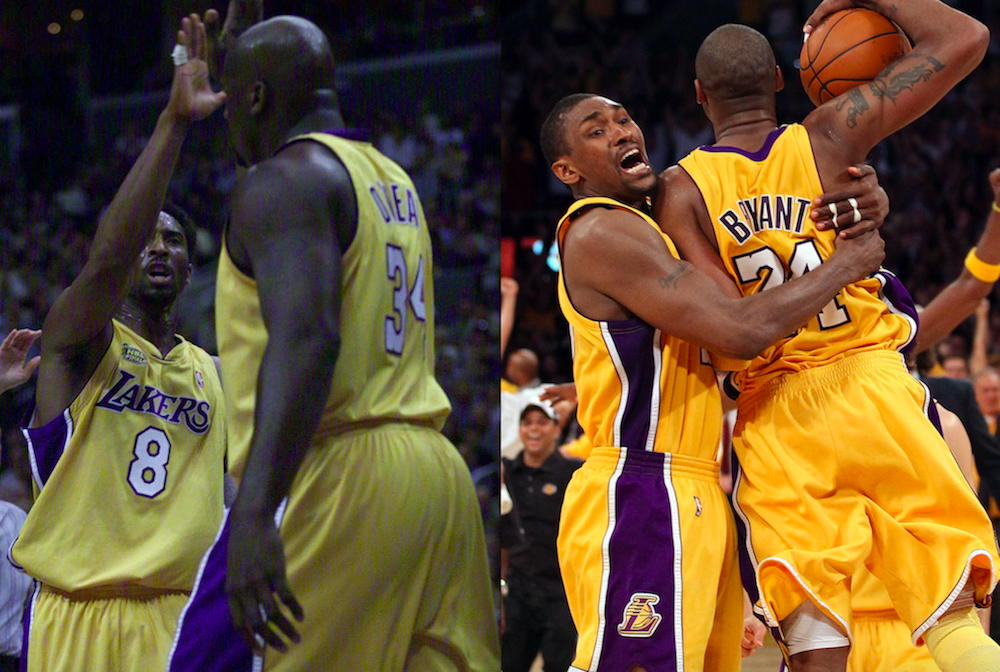 Kobe Bryant reached seven NBA Finals over the course of his illustrious 20-year career, winning five titles. And he carried plenty of scrubs along the way — D.J. Mbenga, Shannon Brown, Sasha Vujacic, and Adam Morrison can thank the Mamba for their two rings apiece. Mark Madsen got two rings almost a decade earlier. Stanislav Medvedenko owes Kobe for his one. Hell, Brian Shaw got three rings on the backs of Kobe and Shaquille O'Neal. Thankfully for Kobe, he had a few better options to pass to en route to his Finals appearances. Here's our rankings of Kobe Bryant's best NBA Finals teammates ever.

Yikes, rough start. The UCLA point guard went to three straight Finals with Kobe, from 2008 to 2010, winning the last two. He functioned as a speedy change of pace to starter Derek Fisher and spaced the floor; in those three seasons, Farmar hit 36.5 percent of his threes, attempting 5.6 of them per 36 minutes.

[dx_custom_adunit desktop_id="RTK_K67O" mobile_id="RTK_5yk0"] The future Lakers head coach went to four Finals with Kobe, losing in 2004 and 2008 to the Pistons and Celtics, respectively, before claiming victory over the Magic and Celtics in 2009 and 2010. Not much of a scorer, Walton offered size and playmaking on the wing, which Phil Jackson valued in his triangle offense.

Eight years after his taking part in the Bulls' three-peat from 1991 to 1993, Grant went to the Lakers as part of the massive four-team trade that sent Patrick Ewing to the SuperSonics. In 2000-01, he started 77 games for the Lakers, averaging 8.5 points and 7.1 rebounds to earn his fourth ring.

An early iteration of the modern-day three-and-D wing, George was just good enough from outside to let his impactful defense flourish off the bench. The 6'8" small forward went to four Finals in five years with Kobe, claiming rings from 2000 to 2002 before falling to the Pistons in 2004.

[dx_custom_adunit desktop_id="RTK_K67O" mobile_id="RTK_5yk0"] Kobe's buddy never won a ring with the Lakers, but he was integral off the bench for the 2007-08 Lakers that lost to Boston in the NBA Finals. He averaged 1.4 blocks in just 18.7 minutes per game, but he saw his role diminish after the team traded for Pau Gasol. He got his title four years later with the Heat.

Walker signed with the Lakers in July 2001, just in time to participate in the final year of the team's three-peat. That year, the University of Louisville product was a starter at power forward alongside Shaquille O'Neal, averaging 6.7 points, 7 rebounds, and 1.3 blocks in 24 minutes per game.

A big, smart knockdown shooter, Radmanovic narrowly missed winning a championship with Kobe. He was a big part of the 2008 squad that fell to the Celtics in the Finals, hitting 40.6 percent of his three-pointers on the year, then was traded in February 2009 for Shannon Brown and Adam Morrison, months before the Lakers claimed the title.

[dx_custom_adunit desktop_id="RTK_K67O" mobile_id="RTK_5yk0"] The Magic traded the then-22-year-old to the Lakers early in the 2007-08 season, but he'd hardly see the floor in the postseason, playing eight games before the team fell to the Celtics in the Finals. The athletic wing would have a huge impact the following year, starting all 23 Lakers playoff games en route to a title, averaging 11.3 points, 4.2 rebounds, 2.3 assists, and 1.6 steals while hitting 47.6 percent of his threes in that span.

There for all of Kobe's five championships and both Finals losses, Fisher's best NBA Finals came in 2001, when he averaged 13.4 points, 3.8 rebounds, 3 assists, and 1.3 steals per game while shooting a ridiculous 51.5 percent from deep on 4.3 attempts per game. His 259 career playoff games are the most in NBA history (for now; LeBron James trails him by 20 after his run to the 2018 Finals).

[dx_custom_adunit desktop_id="RTK_K67O" mobile_id="RTK_5yk0"] A season removed from taking part in the Bulls' three-peat from 1996 to 1998, the veteran point guard signed with the Lakers, winning two more titles in 2000 and 2001, his last two seasons in the league. He was invaluable in the 2000 postseason, averaging 8.6 points and 3.2 assists while starting every game and providing dependable perimeter defense.

Before he became Metta World Peace or the Panda's Friend, Ron-Ron claimed the only title of his career alongside Kobe in 2010. During the regular season, the former Defensive Player of the Year made 77 starts and posted 11 points, 4.3 rebounds, 3 assists, and 1.4 steals per game while shooting 35.5 percent from deep.

The starting point guard for the 2004 Lakers squad that fell to the Pistons in five games in the Finals, the aging Glove averaged 14.6 points, 4.2 rebounds, 5.5 assists, and 1.2 steals per game while starting all 82 regular season games. He'd end up getting that elusive title in 2006 as the Heat's backup point guard.

The final season of Karl Malone's 19-year Hall of Fame career was his lone season not as a member of the Utah Jazz. He was still a beast at 40, averaging 13.2 points, 8.7 rebounds, 3.9 assists, and 1.2 steals in 2004. He played through a sprained knee in Games 3 and 4 of the Finals, before sitting out of the series-deciding Game 5 loss.

Horry won seven NBA titles, claiming three of them with the Lakers from 2000 to 2002. He was most instrumental in 2002, when he was inserted into the starting lineup after coming off the bench for the first five playoff games. He started the rest of the way. During that postseason, he stuffed the stat sheet with 9.3 points, 8.1 rebounds, 3.2 assists, 1.7 steals, and 0.8 blocks per game while shooting 38.7 percent from deep.

The three-time All-Star was the third man behind the duo of Kobe and Shaq on the championship-winning 2000 Lakers, averaging 15.9 points per game while providing his always terrific range; no one else on the team averaged more than seven points per game that year. It was the only trip past the second round of the playoffs in his career.

[dx_custom_adunit desktop_id="RTK_K67O" mobile_id="RTK_5yk0"] Perhaps now known more for his bowling-related injuries and bad haircuts, Bynum was once one of the best centers in the NBA. Across the 2009 and 2010 postseasons, which both ended in titles, the behemoth averaged 12.8 points, 9.2 rebounds, and 2.1 blocks per game. He was 21 and 22.

The University of Rhode Island product spent seven seasons as Kobe's teammate. Across the 2008, 2009, and 2010 postseasons, two of which ended in titles, the power forward averaged 12 points, 9.2 rebounds, 2.2 assists, and 1.2 blocks per game. The following season, he was named Sixth Man of The Year.

The Lakers' midseason acquisition of Gasol in 2007-08 transformed them into contenders. They went 29-16 through the day the deal was executed and 28-9 following the trade. They'd fall to the Celtics in the Finals that year before winning two titles of their own consecutively. Gasol averaged 18.3 points, 10.4 rebounds, 3.3 assists, and 2 blocks per game across those three postseasons.

[dx_custom_adunit desktop_id="RTK_K67O" mobile_id="RTK_5yk0"] Obviously. Despite their feelings about one another, Shaq and Kobe formed one of the most lethal duos in NBA history. In 1999-00, Shaq led the league in scoring (29.7 points per game) and field-goal percentage (57.4 percent) in the regular season, then led the postseason in scoring (30.7 points per game) and rebounding (15.4 boards per game) as the pair won their first of three consecutive titles together.