The Best NBA Finals Teammates Michael Jordan Ever Had 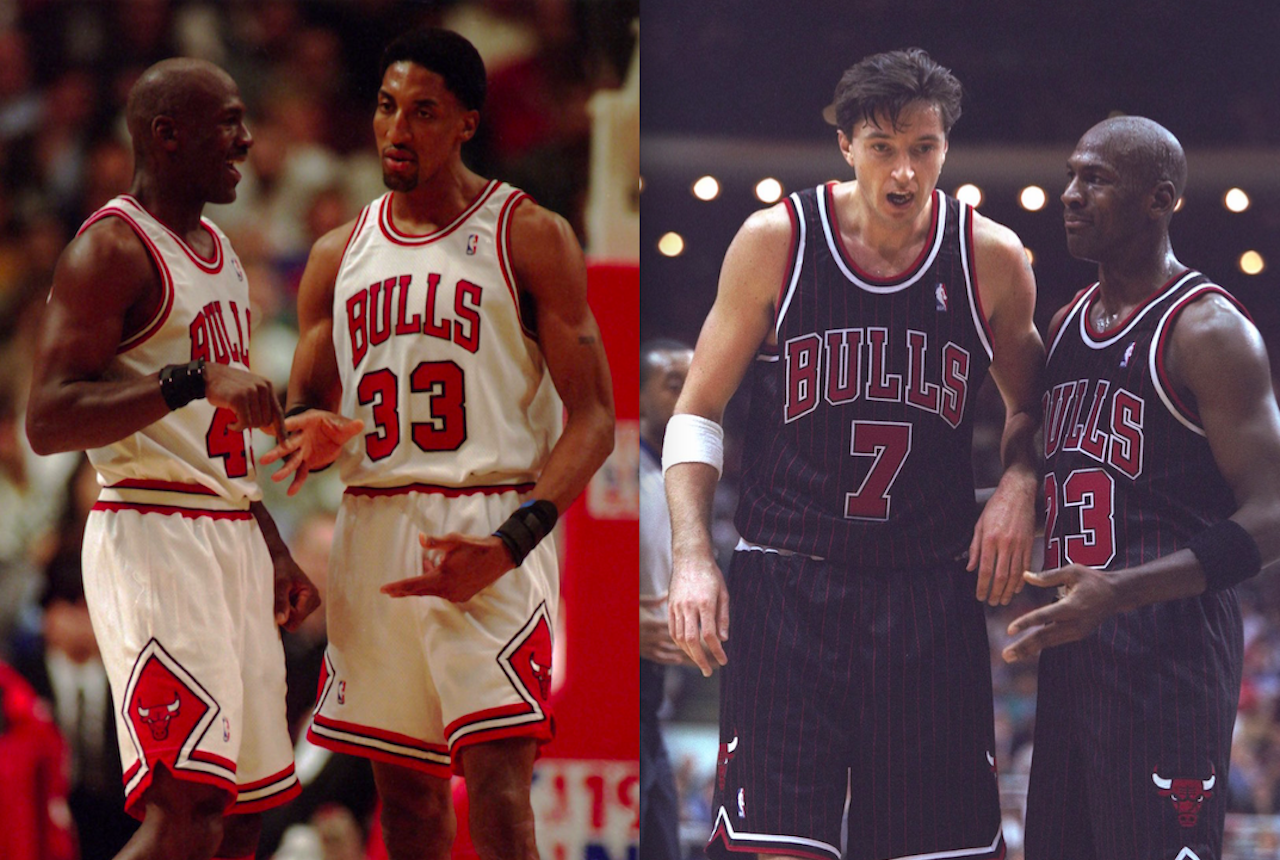 It didn't really matter who was playing center for Michael Jordan's Chicago Bulls during either of their '90s three-peats. Bison Dele, Bill Wennington, Will Perdue, the corpse of Bill Cartwright: Not only did these guys get rings thanks in large part to Jordan, they actually played sizable roles on some of the best teams ever. But the relative lack of center value during Jordan's reigns didn't mean his squads lacked talent; he also had the benefit of playing with two Hall of Famers and a collection of steady role players. Here's our rankings of Michael Jordan's best teammates in the NBA Finals.

Because Jordan's six Finals trips and championships came in an eight-year span with one team, this list isn't exactly deep with talent, making this bottom spot almost impossible to pick. Perdue gets the nod as part of the Bulls' center rotation for the first three title teams, from 1991 to 1993. His best Finals game was also his first one, when he didn't miss a shot and notched six points, four rebounds, and a block in a Game 1 loss to the Lakers in 1991.

[dx_custom_adunit desktop_id="RTK_K67O" mobile_id="RTK_5yk0"] The center was 33 when he won his first championship with the Bulls in 1996. That season, the seven-footer gave Jordan's Bulls 15 minutes per game, averaging 5.3 points and 2.5 rebounds. He missed the 1997 playoffs due to injury, but was once again part of the center rotation for the 1998 title run.

Now a legend on the broadcast mic for Bulls broadcasts, the No. 6 overall pick of the 1989 didn't quite have the career many expected, but he was a serviceable bench big for the team's three-peat from 1991 to 1993. He averaged 12.1 minutes per game in the 1993 playoffs, scoring 4.1 points and grabbing 2.1 rebounds.

In the final season of his productive 11-year career, mostly as a member of the New York Knicks, Tucker joined the 1992-93 Bulls, claiming his first career championship. The three-point specialist hit 39.7 percent from deep in the regular season, then upped his mark to 46.2 percent in the playoffs.

[dx_custom_adunit desktop_id="RTK_K67O" mobile_id="RTK_5yk0"] The expert marksman spent the last three and a half seasons of his 10-year career in Chicago, helping the Bulls to their first two titles in 1991 and 1992. The Long Beach State alum shot a scorching 41.7 percent from three off the bench across those two playoff runs.

Burrell was the sort of role player teams would salivate over today: a strong small forward who could do a little of everything. He joined the Bulls for their last championship, in 1998, averaging 5.2 points, 2.5 rebounds, 0.8 steals, and 0.5 blocks in 13.7 minutes per game, primarily off the bench.

[dx_custom_adunit desktop_id="RTK_K67O" mobile_id="RTK_5yk0"] The big man's best days were behind him by the time he joined the Bulls — he won his first of three consecutive titles with Chicago just weeks before his 34th birthday — but that didn't stop the owner of a nice fadeaway from starting at center in all 58 playoff games during the team's first three-peat.

Caffey played sparingly as a rookie during the 1995-96 season, but he was a solid contributor in their championship run the following season. In 1996-97, he averaged 7.3 points and 4 rebounds in 18.7 minutes per game, and he started five of the team's 19 playoff games. Caffey was traded midway through the following season.

Back when he was still Brian Williams, the beefy center played just nine regular season games for the Bulls after sitting out most of the 1996-97 season as a free agent. But he was featured off the bench in all 19 of the squad's playoff games, playing 17.7 minutes per contest and contributing 6.1 points and 3.7 rebounds.

[dx_custom_adunit desktop_id="RTK_K67O" mobile_id="RTK_5yk0"] Williams went undrafted after four seasons at North Carolina, but at least he got scooped up by the right team at the perfect time. Williams' first three seasons in the NBA coincided with the Bulls' first three-peat. His postseason burn increased with each season, culminating with 5.5 points, 5.8 rebounds, and 0.9 blocks in 20.8 minutes per game in the 1993 playoffs.

Now the Bulls' vice president of basketball operations, Paxson was a steady, efficient point guard for the Bulls during consecutive championships form 1991 to 1993. He dropped 20 points and four assists in Chicago's closeout game against the Lakers in the 1991 Finals; he averaged 13.4 points and 3.4 assists to just 0.4 turnovers per game in the series.

Now an agent for NBA players, Armstrong claimed three consecutive rings with the Bulls from 1991 to 1993. By the third title, he'd become a steady third creator behind Michael Jordan and Scottie Pippen, averaging 12.3 points and 4 assists per game while shooting a league-best 45.3 percent from three-point range.

One of the best three-point shooters of all time, Kerr feasted on spot-ups during the Bulls' second three-peat thanks to the creation of Michael Jordan and Scottie Pippen. In those three regular seasons, the point guard shot a ridiculous 47.8 percent from deep. He averaged 8.1 points in the regular season during that span, and didn't miss a single game.

Kukoc emerged as a solid scorer during MJ's nearly two-year absence between three-peats, then became en efficient third option behind His Airness and Scottie Pippen on title teams in 1996, 1997, and 1998. The Croatian forward's best Finals came in the Bulls' last trip, when he put up 15.2 points on 50 percent shooting to go with 4.7 rebounds and 2.7 assists per game.

[dx_custom_adunit desktop_id="RTK_K67O" mobile_id="RTK_5yk0"] The sturdy defensive guard closed out his career with five championships in his last six seasons. The first three of those came during the Bulls' second three-peat; he averaged 7.6 points, 3.9 rebounds, 1.2 steals, and 2.6 assists to just 0.8 turnovers across those three playoff runs. He then won consecutive ttles with the Lakers in 2000 and 2001.

The unquestioned third-best player during Chicago's first three-peat, Grant was a tough interior defender and scorer. In those three championship seasons, he averaged 13.4 points, 9.3 rebounds, 2.5 assists, 1.2 steals, and 1.3 blocks per game. His last-second swat of Kevin Johnson in 1993 sealed the team's third straight title.

Before forming a friendship with an oppressive dictator, Rodman oppressed anyone who even thought they had a chance of getting a rebound while he was on the floor. The two-time Defensive Player of the Year led the league in rebounding in seven straight seasons, with the last three coming during his three-year stint with Chicago, when the Bulls won titles in 1996, 1997, and 1998.

[dx_custom_adunit desktop_id="RTK_K67O" mobile_id="RTK_5yk0"] You were expecting Jud Buechler? Jordan's only teammate on all six of his title teams, Pippen isn't just His Airness' best teammate, he's one of the greatest small forwards of all time. Across all six NBA Finals, he averaged 19 points, 8.3 rebounds, 5.9 assists, 1.9 steals, and 1.1 blocks per game.