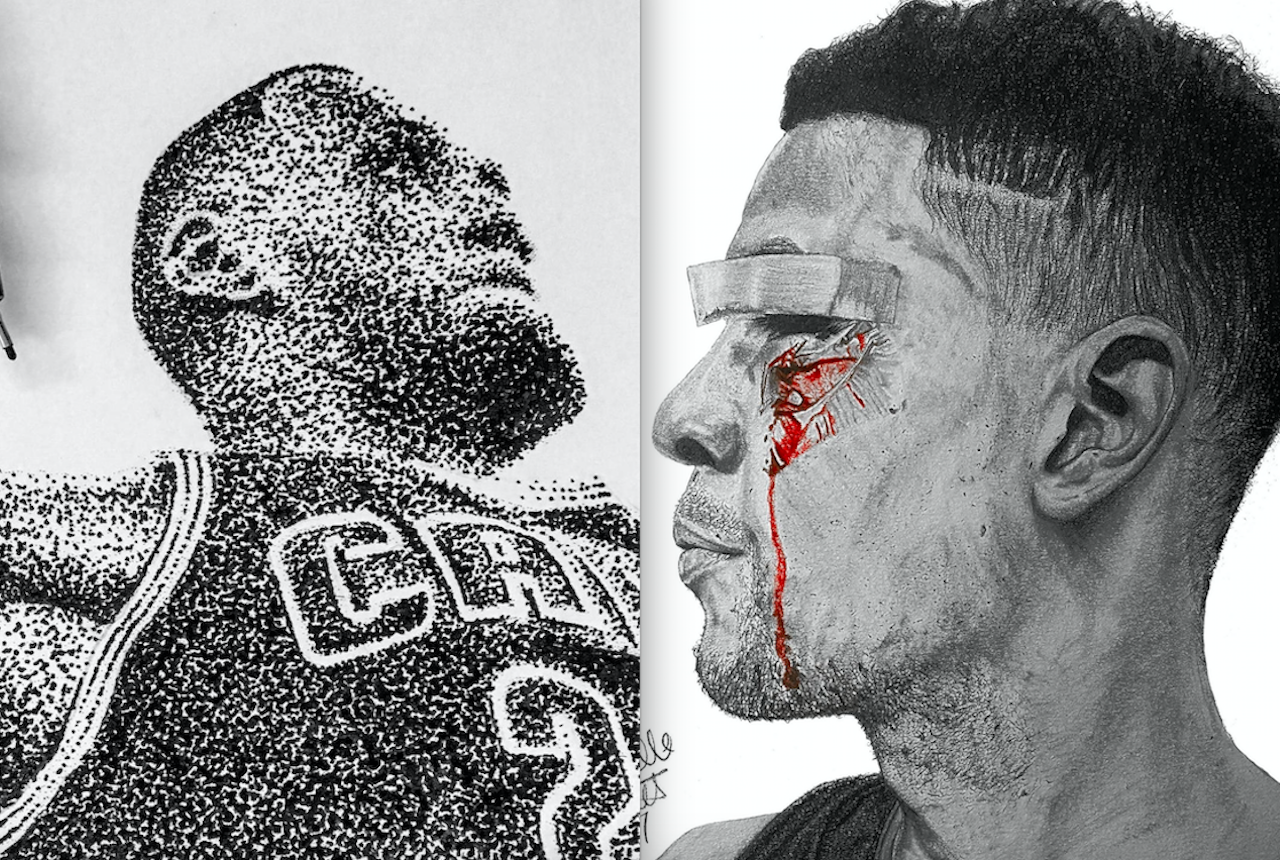 The moderators of Reddit's lively NBA page challenged subscribers to blow basketball fans' minds with their basketball-centric artwork, likely in preparation of an awesome annual NBA art tradition that we've covered before. The results were just as captivating as the sport the works celebrate. Here are the 20 coolest pieces of NBA art submitted in the first edition of the new Reddit tradition, called "Fan Art Friday," in no particular order.

This beauty, titled "Strive for Greatness," was shared by Reddit user ChinoReckless, who was kind enough to provide a close-up to show his precise stippling, the art of marking with tiny dots. "More patience than talent when it comes to stippling," ChinoReckless wrote. "... This took about 20 hours and had to restart a couple of times."

[dx_custom_adunit desktop_id="RTK_K67O" mobile_id="RTK_5yk0"] Perfect. LeJoog's drawing includes nods to all the nicknames Kevin Durant has grumpily rejected during his career, including "the Slim Reaper," "the Durantula," "Cupcake," and "Snake" (notice the tattoo). It also acknowledges the awful nickname Durant came up with and hoped would catch on: "the Servant."

A nightmare of an opponent mixed with an actual nightmare: Reddit user reelrichard posted this rendition of the Milwaukee Bucks star with the title "Greek Freak X Slenderman." The individual also addressed what another Redditor called Giannis' "muscular penis": "Lol. When we made this, we didn’t even think about that. This drawing represents how he can move anywhere and be everywhere on the court." Not sure how putting a shoe on one's dong helps with that but OK.

The Houston Rockets' gravity-defying forward was immortalized by Reddit user DOG_herpes, a name that opens its own batch of questions. Numerous commenters told the artist that their rendition of Gerald Green belongs in an Adult Swim show. "Biggest compliment ever I love adult swim," DOG_herpes wrote in respose.

[dx_custom_adunit desktop_id="RTK_K67O" mobile_id="RTK_5yk0"] This one, "Portrait of Kyle Lowry Holding Portrait of Kyle Lowry" by talentpun, has a story behind it. That nightmarish rejected early "Simpsons" character in front — or, as talentpun described it, Oogie Boogie from "The Nightmare Before Christmas" — is an actual self-portrait Lowry drew back in April 2014.

This piece from gotsnowart is another that tells a story, this time of Austin Rivers' gutty and bloody performance in Game 6 of his Los Angeles Clippers' matchup with the Portland Trail Blazers in the first round of the 2016 NBA playoffs. Check out more of the artist's work, including baseball and football drawings, on Instagram: @artbydanielle.g.

Artist Riley Gisseman, who goes by RGiss on Reddit, shared this rendering of Portland Trail Blazers point guard Damian Lillard — a curious subject considering Gisseman is a Utah Jazz fan, at least according to Instagram, where you can follow the artist @rileygissemanart.

[dx_custom_adunit desktop_id="RTK_K67O" mobile_id="RTK_5yk0"] Reddit user radwagondesign offered up this digital creation of 21-year-old Boston Celtics wing Jaylen Brown, who's in his second season. "Y'all are too kind," radwagondesign responded to compliments of his art. "For more of my stuff I have a website (radwagondesign.myportfolio.com) and I’m on Instagram (instagram.com/radwagondesign)."

OK, this one's too cool: a crossover between Dr. Seuss' "Oh, the Places You'll Go" and perhaps the best defensive player doin' it in the league right now, Utah Jazz center Rudy Gobert. This piece was shared by Reddit user Robot_Trinity, who included an Easter egg: The supposed author of this book is "J. Ingles," a nod to Gobert's teammate Joe Ingles.

LeJoog strikes again. The same artist who roasted Kevin Durant earlier in this list also lampooned the league's leading conspiracy theorist, Boston Celtics point guard Kyrie Irving. "I'm excited that I got to share it with everyone today, and overwhelmed by the positive feedback," LeJoog wrote of his piece, appropriately called "Stay Woke."

[dx_custom_adunit desktop_id="RTK_K67O" mobile_id="RTK_5yk0"] No, that's not a Tyrannosaurus rex, but former Toronto Raptors and Miami Heat big man Chris Bosh, who's sadly been out of the league since the 2015-16 season due to life-threatening blood clots. This drawing was posted to Reddit by user SockUnicorn, who appears to be a Heat fan.

This mural of Houston Rockets superstar James Harden was shared by Reddit user phbeatles98. Don't breathe on it, even on your computer screen, or the real-life Beard will go to the line for two free throws. "Hope you guys enjoy this illustration I did of Harden," phbeatles98 wrote.

I don't know if it's the beard or what, but people apparently love drawing James Harden. In isawk81's piece, "Harden Racer," the Houston Rockets' offensive linchpin is reimagined as a "Speed Racer" character who has to contend with the smell of the inside of his shoe car.

[dx_custom_adunit desktop_id="RTK_K67O" mobile_id="RTK_5yk0"] Reddit user deodurant's creation is another example of stippling, the method used to draw LeBron James in the initial image in this list. "I made this a few years ago. I think it took around 3-4 hours," deodurant wrote. "... First, I drew the outlines in pencil, then just kept dotting areas with different densities. Once you erase the pencil it looks really clean."

OK, last James Harden one, I promise. This cool cartoon creation comes from Reddit user pizzzzza. The artist gave this version of the Houston Rockets star a Mr. T mohawk that the mortal lock for the 2018 NBA MVP award should consider rocking full-time.

Though the origins of the phrase "ball don't lie" are often debated, it's generally attributed to Rasheed Wallace, the retired four-time All-Star who'd often shout the three words when an opponent missed a free throw following a foul could Wallace disagreed with. This creation was shared by Reddit user lolwtferic.

[dx_custom_adunit desktop_id="RTK_K67O" mobile_id="RTK_5yk0"] In GIF form, TroobsTho re-created Rafer Alston's infamous head slap of Eddie House during Game 2 of the Orlando Magic's 2009 Eastern Conference semifinals matchup with the Boston Celtics. "I could have sworn there was a giant insect on his headband, a real nasty, bloodsucking-looking thing," Alston hilariously told reporters after the loss. "I was merely looking out for his safety, and I think that says a lot about my character."

"Kawhiborg" by Reddit user Frenden was more appropriate before Kawhi Leonard's injury-riddled 2017-18 campaign, but that doesn't mean the art isn't badass. "Drawing the letters is half the fun. I wasn't really planning on this being more than a doodle when I started, so I didn't account for how and where to put text," the artist wrote. "I ended up just scribbling it at the bottom, whoops."

[dx_custom_adunit desktop_id="RTK_K67O" mobile_id="RTK_5yk0"] The perfect piece to finish with: Reddit user LosGanjalesBakers utilized SLAM, ESPN, and Dime magazine covers to create this masterful collage. "This was actually a school project when I took an art class for fun my senior year," the artist wrote. "We were told to do a collage of any form for our very first project, and I chose to do something like this. ... Looking back at this, I don't know how I even had the patience to execute something like this. Shit took hours of work lol."