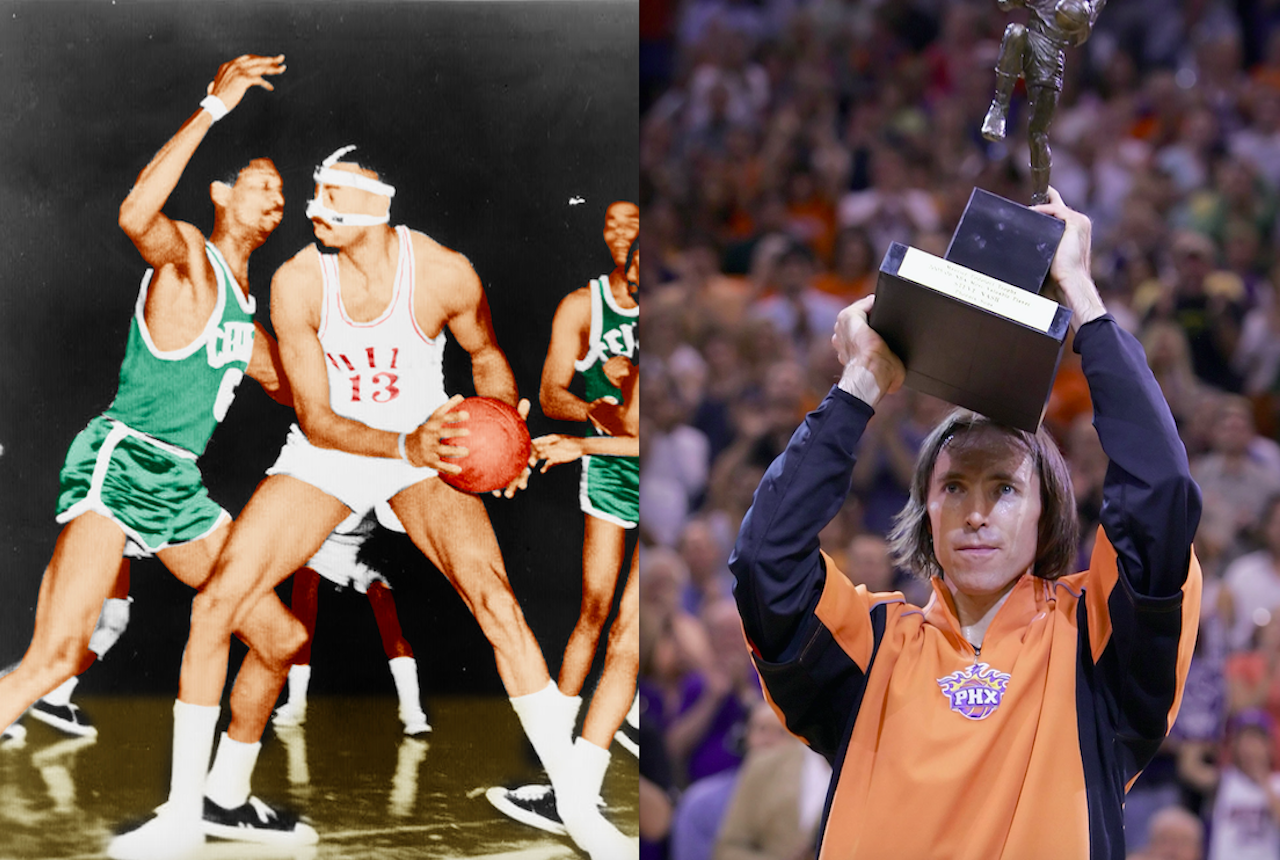 Not every NBA accomplishment is held in the same esteem as the equivalent from another season. Just ask Kevin Durant. Narrative and the results of previous years play laughably large roles in determining stuff like Most Valuable Player. Which is why LeBron James doesn't have an MVP trophy for each finger. Because voters just get sick of picking the same guy every year. Here are the most questionable NBA awards ever, in chronological order because I don't need to give any of the exceedingly large men featured, like Charles Barkley, any more reason to want to crush me. (On second thought, Barkley could never catch me. Bring it on, Chuck. I dare you.)

Not one but two players should have beaten Bill Russell — pictured here defending Wilt Chamberlain — out for this award. Chamberlain averaged a record 50.4 points per game that year and managed to outrebound Russell, who pulled down 23.6 boards per game. Oh, and Oscar Robertson averaged a triple-double. But this was the height of the "best player on the best team" philosophy of MVP voting, and Russell was that.

Unseld became the second player ever to win MVP as a rookie, leading the Bullets to a 57-25 record a year they went 36-46. But Willis Reed was just better, scoring way more (21.1 to 13.8 points per game) on much greater efficiency and approaching Unseld's gaudy rebounding numbers (14.5 to 18.2 per game).

I'm all for giving the NBA Finals MVP to a player on the losing side, but only if there's no clear choice among the winners, and there was: John Havlicek averaged 28.3 points, 11 rebounds, and 4.4 assists per game and played every single minute of his Celtics' seven-game series victory.

The Celtics big man was one of the most head-scratchingest MVP choices ever. Not because Cowens wasn't great in 1972-73, but there were two clearly better choices — Kareem Abdul-Jabbar and Wilt Chamberlain — and four guys who had as much a case as Cowens did: Tiny Archibald, John Havlicek, Jerry West, and Walt Frazier.

Through five games, Kareem Abdul-Jabbar was the obvious choice, averaging 33.4 points, 23.6 rebounds, 3.2 assists, and 4.6 blocks against the 76ers in the NBA Finals. But the center stayed in Los Angeles to recover from an injury instead of going on the road for the decisive Game 6. That, and teammate Magic Johnson's marketability, cost him.

Darrell Griffith, 1981 Rookie of the Year

Voters gave the award to the leading scorer of the rookie class. But Griffith's 20.6 points per game weren't all that efficient, he averaged more turnovers than assists, and his squad won just 28 games. Kelvin Ransey averaged 15.2 points and 6.9 assists and was third in minutes per game for a 45-win Trail Blazers team; he lost the award by a single vote point. Larry Smith, Kevin McHale, and Joe Barry Carroll all had good cases as well.

The guard built much of his Hall of Fame career on his defense, but he'd already started fading at the end in 1985-86. Alvin Robertson, meanwhile, set records of 3.67 steals per game and 301 total steals. Both marks stand today. Robertson also posted the third-highest steal percentage ever, according to Basketball Reference.

The league didn't have this award until the 1982-83 season, and in the early going voters made some highly dubious decisions. The craziest was Cooper, who had a reputation as an elite one-on-one defender. But he didn't have the impact of Mark Eaton, who led the league with 4.1 blocks and a defensive box plus/minus of 6.1, according to Basketball Reference. Alvin Robertson led the league with a crazy 3.2 steals per game, a season after setting records for total steals and steals per game.

Charles Barkley had more first-place votes than Magic. The two superstars had similarly productive seasons, but Magic had the advantage of playing with Hall of Fame teammate James Worthy and stars like A.C. Green and Byron Scott. Barkley's 1989-90 76ers teammates combined for one All-Star nod in their careers. Michael Jordan had a great case as well.

Barkley had an MVP-caliber season in 1992-93, but Michael Jordan was simply better, leading the league in scoring, steals per game, and a long list of advanced metrics. But he was likely the victim of voter fatigue: MJ had won the previous two MVP awards, plus a Finals MVP in 1992.

Rodman pulled down an incredible 16.8 rebounds per game and provided his usual tenacity in 1994-95. But he played just 49 games. Dikembe Mutombo, meanwhile, led the league in blocks per game for the second straight year, with 3.9 per contest, and was named Defensive Player of the Year, but he had to settle for the All-Defensive second team.

Michael Jordan got 109 of 113 first-place votes when the Bulls won 72 games in 1995-96, but when he replicated his production for a squad that won 69 games a year later, then the second-most wins ever, he finished second to Malone, who'd led the Utah Jazz to a 64-win season.

Months before taking part in the Malice at the Palace, voters named Ron Artest the Defensive Player of the Year over a handful of more deserving players. It should have gone to Ben Wallace, whose 9.08 defensive win shares in 2003-04 are the most since the 1972-73 season; that mark has only been bested by five players in NBA history. Wallace's Pistons were second in defensive rating, according to Basketball Reference.

Nash won both awards during the rise of Mike D'Antoni's "seven seconds or less" offense. As great as Nash was, he had a lot of help — both via his teammates and an offense that allowed him to rack up bonkers assist totals. Dirk Nowitzki dragged the Mavericks to 58 wins in 2004-05 and should have taken it that year, and he could have done it again the following season, as could have LeBron James and Kobe Bryant.

Both Kobe Bryant All-Defensive teams after 2009-10

Bryant was named to 12 All-Defensive teams, and he even deserved some of them. But as he got older and injuries mounted, his defense dropped off, but the All-Defensive nods did not. He was named to the 2011 first team and the 2012 second team, even though a knee injury suffered during the 2009-10 season emphatically closed the door on his days as an elite defender.

Rose put up arguably the most pedestrian numbers for an MVP ever: 25 points on middling efficiency, 7.7 assists, and 1 steal per game. Fortunately he had the narrative on his side. No one wanted to give it to LeBron in his first season after "The Decision," and people were already growing tired of Dwight Howard, who had perhaps the best season of his career.

Tyson Chandler won Defensive Player of the Year in 2011-12 for almost single-handedly turning the Knicks from a bad defensive team into one of the best. But he wasn't even selected for the All-Defensive first team; back then, coaches voted for All-Defensive teams while the media voted for DPOY. Instead, coaches were more intrigued by Serge Ibaka's impressive block numbers and less dissuaded by his tendency to bite for every pump fake in his younger days.

For the second year in a row, the Defensive Player of the Year was not on the All-Defensive first team. Not only was Marc Gasol left off the first team, but it consisted of six players due to a tie. Take your pick, the man in the middle of the team with the second-best defensive rating, according to Basketball Reference, should have made it over all six honorees, including Tyson Chandler.

Iguodala's case was built on his defense against LeBron James and his all-around contributions on offense. But LeBron averaged 35.8 points, 13.3 rebounds, and 8.8 assists. Though it wasn't the King's most efficient series, it's not like Iggy shut him down. Stephen Curry, meanwhile, led the victorious Warriors in minutes, points, and assists, all by pretty wide margins.

It's hard to imagine what the media members who selected Crawford were thinking. The only thing he could do at this point of his career was score, and not only did two others who received more votes post higher scoring averages than him — Will Barton and Ryan Anderson — they did so much more efficiently. Andre Iguodala didn't score much but did everything else, and Enes Kanter gave the Thunder a wildly efficient 12.7 points and 8.1 rebounds per game.