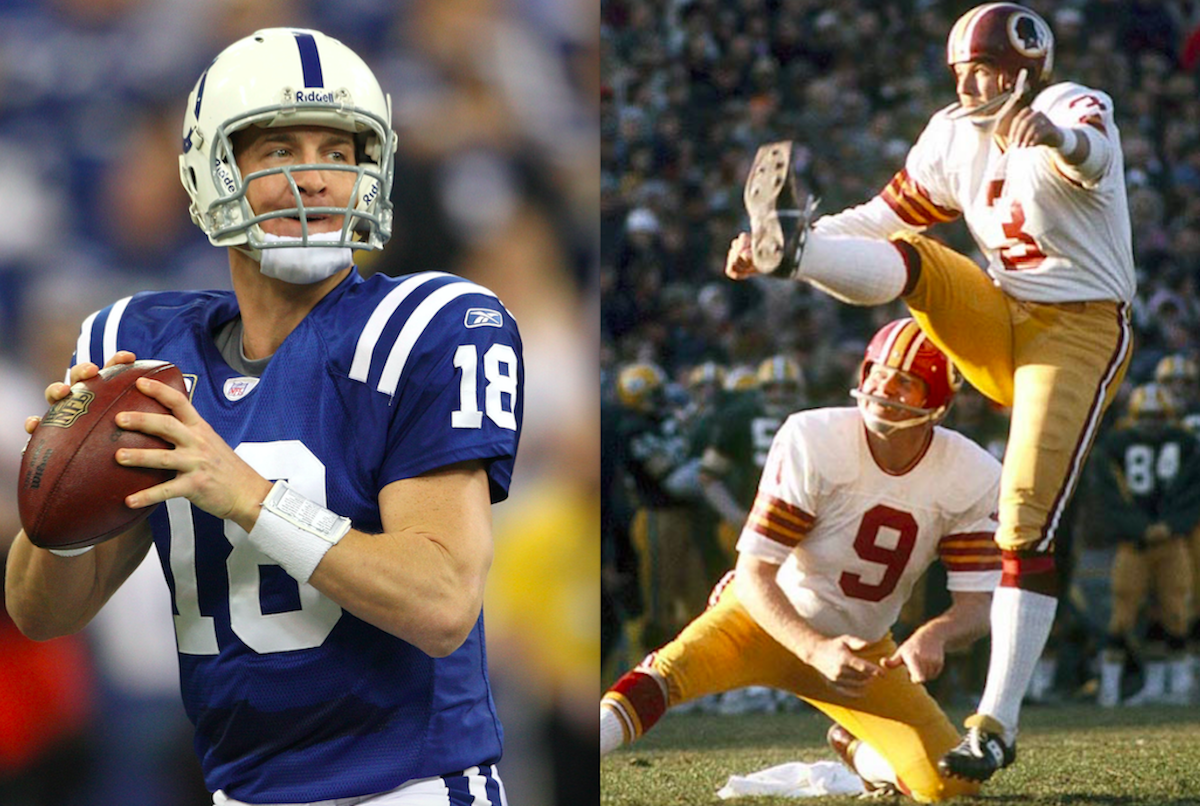 I promise I don't have anything against Hall of Fame-bound quarterback Peyton Manning. But I think the two-time Super Bowl champ has a few pieces of hardware that should've gone to other players. And he's not alone. Because plenty of all-time greats have received their own questionable NFL awards. Like John Elway, Joe Montana, and Brett Favre to name just a few. So check out this list of NFL history's most dubious awards decisions — in categories such as MVP, Super Bowl MVP, Defensive Player of the Year, and Rookie of the Year — in chronological order. And decide for yourself: Are these hot takes, or just true facts?

Splitting duties all over the field, Hornung led the league in points scored thanks in part to his 15 field goals and 41 extra points, chipping in 10 touchdowns, eighth in the league, and 742 yards from scrimmage. Quarterback Sonny Jurgensen, on the other hand, led the league in completions (235), passing yards (3,723), and passing touchdowns (32) while carrying the Eagles to a 10-4 mark. Jim Brown led the NFL in rushing yards (1,408) and yards from scrimmage (1,867), carrying Cleveland to an 8-5-1 record.

[dx_custom_adunit desktop_id="RTK_K67O" mobile_id="RTK_5yk0"] Tarkenton led the league in completions and attempts in '75, finishing second in passing yardage (2,994) behind Ken Anderson. O.J. Simpson had a monstrous season for the Bills, leading the league in rushing (1,817 yards), rushing touchdowns (16), yards from scrimmage (2,243). Simpson also led the league with 23 rushing and receiving touchdowns, just two behind Tarkenton's passing score total. He posted a 25 in Pro Football Reference's approximate value stat, the second-highest mark ever.

Moseley's win in a bizarre, strike-shortened season was shocking even to him. "I think once I got nominated it was such an unusual thing that everybody voted for me. When they called me to tell me I had won it, I was shocked beyond words," he said. Moseley had some clutch kicks for an 8-1 team, but he also went 16-of-19 on extra points and didn't handle kickoffs for the Redskins. Dan Fouts led the league in passing yards and touchdown passes for the 6-3 Chargers, and Marcus Allen, then a rookie, led the league in yards from scrimmage and touchdowns for the 8-1 Raiders.

Elway was solid in 1987, but not otherworldly, tossing 19 touchdowns and 12 picks, leading the Broncos to an 8-3-1 record in his starts during a strike-shortened season. Out west, Jerry Rice set an NFL record with 22 receiving touchdowns, which would stand until 2007, when Randy Moss had four more games to get his 23. Rice amassed 1,129 yards in 12 contests and added a rushing touchdown. But he (30 votes) and teammate Joe Montana (18 votes) split their votes to leave the door open for Elway (36).

[dx_custom_adunit desktop_id="RTK_K67O" mobile_id="RTK_5yk0"] As passers, Montana and Randall Cunningham were similar: 3,944 passing yards, 26 touchdowns, 16 interceptions, and a 61.7 completion percentage for Montana; and 3,466 yards, 30 scores, 14 picks, and a 58.3 percent clip for the Eagles QB. But Cunningham's work with his feet set him apart: He rushed for five touchdowns and 942 yards, then the second-highest mark ever for a quarterback.

Howard had about as good a game as a return man could have, amassing 244 yards across four kickoff returns and six punt returns. He took a third quarter kickoff 99 yards for a touchdown to put his Packers up 35-21, where the score would stand. But Reggie White was a beast on Green Bay's defensive line, sacking the Patriots' Drew Bledsoe three times and applying the pressure that led to four interceptions.

Favre and Barry Sanders shared the award, but it should have gone exclusively to the Lions running back, who rushed for 2,053 yards, then the second-highest single-season total of all time. Sanders' 2,358 yards from scrimmage broke Marcus Allen's 12-year-old record. Favre went 13-3 with the league's fifth-best scoring defense, but Sanders dragged a less talented Lions team to a 9-7 record and the playoffs.

[dx_custom_adunit desktop_id="RTK_K67O" mobile_id="RTK_5yk0"] Priest Holmes missed two games in 2002, and still he put up the sixth most-valuable season of all time, according to Pro Football Reference's approximate value metric, with a mark of 23. His 21 rushing touchdowns and 24 combined touchdowns led the league. Gannon was good too, but got the edge thanks to an 11-5 record.

The Buccaneers intercepted Raiders quarterback Rich Gannon five times in the 48-21 blowout, icluding three pick sixes. Smith had two of the picks, the ones not taken to the house, but voters should have rewarded the man most responsible for rushing Gannon into his terrible throws: Simeon Rice, who tallied a pair of sacks.

In one of the deepest fields ever, McNair and Peyton Manning split the award with 16 votes each. Tom Brady got eight and Jamal Lewis, whose 2,066 rushing yards were then good enough for second-most ever, got five. Manning was superior to McNair, leading the league in completions, completion percentage, and passing yards, but the award probably should have gone, again, to Priest Holmes, who amassed 2,110 yards from scrimmage and whose 27 combined touchdowns were then good for second all-time.

[dx_custom_adunit desktop_id="RTK_K67O" mobile_id="RTK_5yk0"] The Titans went 8-5 in Young's 13 starts, but he was mediocre, completing just 51.5 percent of his passes and throwing more interceptions than touchdowns. Maurice Jones-Drew, meanwhile, played behind Fred Taylor in Jacksonville and still managed 1,377 yards from scrimmage and was fourth in the league in rushing touchdowns (13) and sixth in combined touchdowns (16).

Manning was fine in the big game after the 2006 season, needing 38 passing attempts to get to 247 yards, and throwing as many touchdowns as interceptions (one). His running backs were more productive against the Bears: Dominic Rhodes ran for 113 yards and a score, and Joseph Addai caught all 10 passes thrown his way and amassed 143 yards from scrimmage.

Manning may have come up with the clutchest play in Super Bowl history, but he was only in position to make the play because the Giants' terrifying defensive line, led by Justin Tuck, held Tom Brady and Co. to just 14 points to ruin New England's bid for a perfect season. The Patriots hadn't scored fewer than 20 in a game all season, playoffs included. Tuck had two of the Giants' five sacks.

[dx_custom_adunit desktop_id="RTK_K67O" mobile_id="RTK_5yk0"] Manning threw for 27 touchdowns in 2008; he never threw fewer than 26 in a season in his career, save for the final year when he made just nine starts. Kurt Warner, Chris Johson, and Drew Brees all probably had better arguments. Brees led the league in completions, passing yards, and passing touchdowns; Warner threw for 4,583 yards and 30 touchdowns to drag the Cardinals to the playoffs (and eventually the Super Bowl), and Johnson rushed for 2,006 yards, then the fifth-highest mark of all time.

Woodson was crazy impactful, leading the league with nine picks and three pick sixes. But Darrelle Revis was otherworldly as a shutdown corner, eliminating the league's best receivers and serving as the catalyst for his Jets' finishing first in scoring defense and yardage defense. NFL offenses threw for just 2,459 yards and eight touchdowns against New York all season.

[dx_custom_adunit desktop_id="RTK_K67O" mobile_id="RTK_5yk0"] NaVorro Bowman seemed like the clear choice at the time, out-tackling the Panthers linebacker 120 to 96 and being more disruptive in the turnover game; Kuechly had four interceptions but didn't force or recover a fumble. Bowman forced six and recovered two, and had two inreceptions — including an 89-yard pick six to seal a playoff berth for the 49ers in Week 16. Bowman also had five sacks to Kuechly's two.

Malcolm Smith's 69-yard interception return for a touchdown with four minutes left in the first half basically ended the game, putting Seattle up 22-0. But he was only on the field for 34 of 69 defensive snaps. Safety Kam Chancellor was everywhere, though, playing a central role in holding the Broncos' Peyton Manning to 280 yards passing on 49 attempts. Chancellor also had a pick in the 43-8 beatdown.

There's no doubt Rodgers had an MVP-caliber season, completing 65.6 percent of his passes for 4,381 yards, 38 touchdowns, and a minuscule five interceptions en route to a 12-4 record. But J.J. Watt put together one of the best seasons ever. His 20.5 sacks in 2014 are the seventh-highest total ever, plus he returned an interception 80 yards for a touchdown, recovered five fumbles, including one for a touchdown, and he scored three more touchdowns on offense. The defensive end also record 10 passes defended.