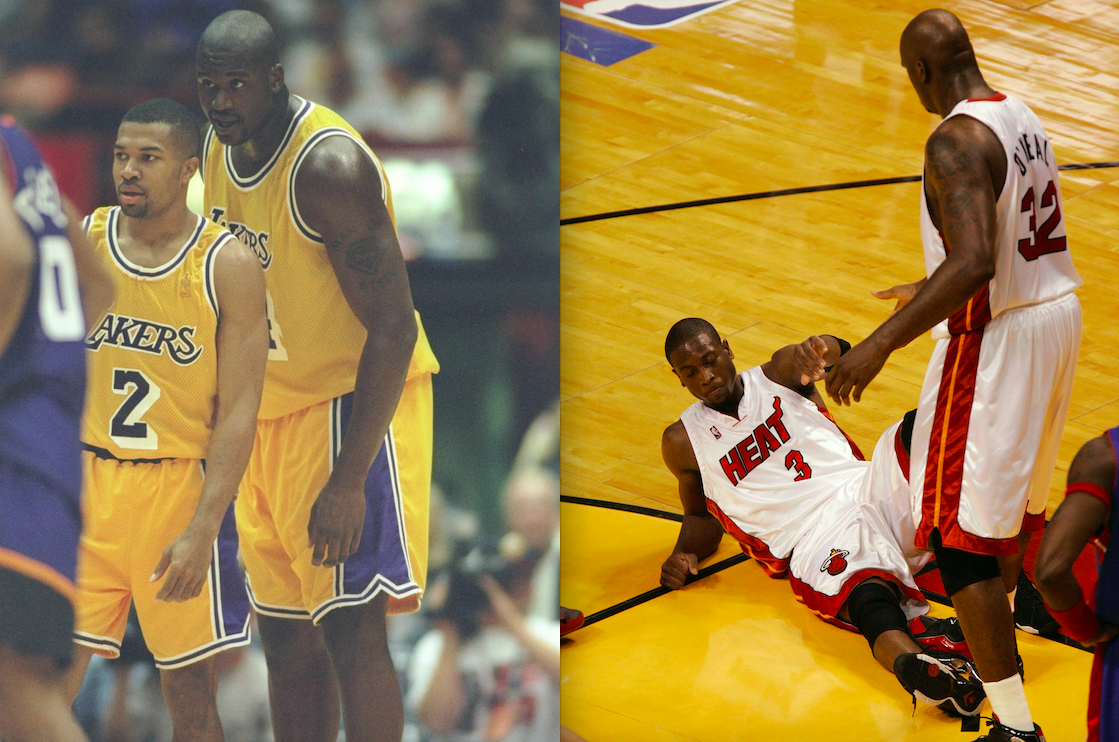 Shaq Daddy. Shaq Fu. The Diesel. The Big Aristotle. The Big Shaqtus. Whatever you want to call him, Shaquille O'Neal was at times an unstoppable force. Because he plowed his team's course to the Finals six times. And he took his share of scrubs along with him (looking at you, Slava Medvedenko). But fortunately for Shaq, he also had his share of stars, including several Hall of Famers, to feed him down low. So check out our rankings of Shaq's best NBA Finals teammates. And then compare the collection to our lists of the best Finals teammates of Kobe Bryant, Michael Jordan and LeBron James.

George's first three seasons coincided with the Lakers three-peat from 2000 to 2002, and his role grew every season. The three-and-D wing averaged 18 minutes per game off the bench in the 2002 NBA Finals, scoring 11 points and grabbing six rebounds in the final game of his squad's sweep of the New Jersey Nets.

[dx_custom_adunit desktop_id="RTK_K67O" mobile_id="RTK_5yk0"] The backup point guard went to four NBA Finals with Shaq, once with the Magic in 1995, then as part of the Lakers three-peat from 2000 to 2002. His best trip to the NBA Finals was his first, averaging 12.5 points and 3.3 assists per game as the Magic got swept by the Rockets.

The veteran big man went to just one NBA Finals with Shaq, in 2002. He was a crucial interior presence during the regular season, starting 63 games and pulling down seven rebounds and blocking 1.3 shots in 24 minutes per game, but he saw his role reduced significantly in the playoffs.

Williams started at point guard alongside Dwyane Wade and Shaq for the 2005-06 Heat, averaging 12.3 points and 4.9 assists to just 1.7 turnovers per game. Though his shot wasn't falling during the playoffs that year, he started every game and remained an efficient distributor in Miami's backcourt en route to a championship.

[dx_custom_adunit desktop_id="RTK_K67O" mobile_id="RTK_5yk0"] A gritty, versatile defender and excellent shooter, the 6'8" Posey could match up with just about any kind of player in a pinch. In the 2006 playoffs, he averaged 7.3 points and 5.9 rebounds in 27.6 minutes per game, and shot a scorching 42.2 percent from deep on 3.8 three-point attempts per contest.

The stretchy power forward came off the bench for most of the 2005-06 season, but was inserted into the starting lineup for the Heat's playoff run. He was the team's third-leading scorer in that postseason, averaging 13.3 points per game. He also pitched in 5.6 rebounds and 2.4 assists per contest.

Fox, a classic glue guy, went to the NBA Finals with Shaq four times. His best Finals series came in 2001, when the small forward shot 45.5 percent from deep, averaging 9.8 points, 6.3 rebounds, 3.5 assists, and 1.5 steals per game as the Lakers swept the New Jersey Nets.

[dx_custom_adunit desktop_id="RTK_K67O" mobile_id="RTK_5yk0"] Fisher went to seven NBA Finals in his career. He was teammates with Shaq for the first four, offering dependable shooting and defense at the point guard spot next to Kobe Bryant. He had his best NBA Finals in 2001, when he shot 51.5 percent from deep and put up 13.4 points, 3.8 rebounds, 3 assists, and 1.3 steals per game.

At the ripe age of 36, Harper started every 2000 playoff game for the Lakers and had an impactful NBA Finals, averaging 10.8 points, 4.8 assists, and 1.3 steals while shooting 40 percent from deep as the team bested the Pacers in six games. He went off for 21 points and six assists in Game 2.

The power forward started alongside Shaq in the Heat's frontcourt in 2005-06, averaging 9.3 points and 7.8 rebounds in the regular season while providing spacing with his midrange shooting. In Miami's Game 6 win over Dallas to clinch the title, Haslem played more than 40 minutes, scoring 17 points and grabbing 10 boards.

[dx_custom_adunit desktop_id="RTK_K67O" mobile_id="RTK_5yk0"] The other half of the 2006 championship-winning Heat's decrepit backcourt, Payton averaged 5.8 points in 24.3 minutes per game in the playoffs. Two years earlier, he and Shaq went to the NBA Finals as Lakers teammates. He averaged 14.6 points and 5.5 assists per game in the 2003-04 regular season.

An elite marksman, 3-D shot a scalding 42.6 percent from deep on a whopping 5.7 attempts per game for Orlando in 1994-95. He upped his scoring averaging to 14.7 points per game during the postseason, but the small forward went cold in the NBA Finals as the Rockets swept the Magic.

In 2003-04, for the first and only time in his career, Malone played for a team that wasn't the Utah Jazz. That season, he averaged 13.2 points, 8.7 rebounds, 3.9 assists, and 1.2 steals while playing alongside Shaq. But continuing the trend of the rest of his career, he couldn't maintain that level of play through the playoffs as the Lakers fell to the Pistons in five games.

[dx_custom_adunit desktop_id="RTK_K67O" mobile_id="RTK_5yk0"] The seven-time NBA champion won three of his titles with Shaq and the Lakers from 2000 to 2002. His best playoff run with LA came in 2002, when he replaced Samaki Walker in the starting lineup after five games. He provided a little bit of everything that postseason, averaging 9.3 points, 8.1 rebounds, 3.2 assists, 1.7 steals, and 0.8 blocks per game while shooting 38.7 percent from deep.

Glen Rice made it past the second round of the playoffs just once in his career, in 2000, when he provided valuable scoring behind the tandem of Shaq and Kobe. The wing shot 41.8 percent from beyond the arc while starting all 23 of the team's playoff games, averaging 12.4 points en route to a ring.

The shooting guard averaged 15.8 points, 4.1 assists, and 1.6 steals per game while shooting 41.5 percent from deep for the Magic in 1994-95, then practically duplicated those numbers in the playoffs. Unfortunately, he's best remembered for bricking four free throws that each could have sealed a Game 1 win in the NBA Finals, leaving the door open for the Rockets' comeback.

[dx_custom_adunit desktop_id="RTK_K67O" mobile_id="RTK_5yk0"] Shaq and Grant formed one of the league's burliest big man duos for the Magic in 1994-95. That year, he averaged 16.2 points, 7.4 rebounds, 1 steal, and 1.8 blocks per game in the playoffs before Orlando fell to Houston in the NBA Finals. Shaq and Grant rejoined forces on the Lakers in 2001, when the power forward won his fourth title.

Penny was one of the league's most dynamic playmakers before injuries derailed his career. In 1994-95, just his second season, he averaged 20.9 efficient points, 7.2 assists, and 1.7 steals per game, then maintained that production in the playoffs. He put up 25.5 points in the Finals, including 32 in Game 2.

Wade lost his mind in the 2005-06 playoffs, carrying the Heat to the championship in just his third season while averaging 28.4 points, 5.7 assists, 2.2 steals, and 1.1 blocks per game in the postseason. Of course, the ability to convince officials to call fouls that never happened didn't hurt either.

[dx_custom_adunit desktop_id="RTK_K67O" mobile_id="RTK_5yk0"] They didn't get along off the court, but on the court, Shaq and Kobe formed a duo that couldn't be denied for three straight years. In 57 playoff games across the Lakers three-peat from 2000 to 2002, Kobe averaged 25.3 points, 4.9 assists, 1.5 steals, and 1.1 blocks per contest. They went to and lost in one more Finals in 2004 before Shaq headed to Miami.