Here Are The Funniest Sports Star Cameos In TV History 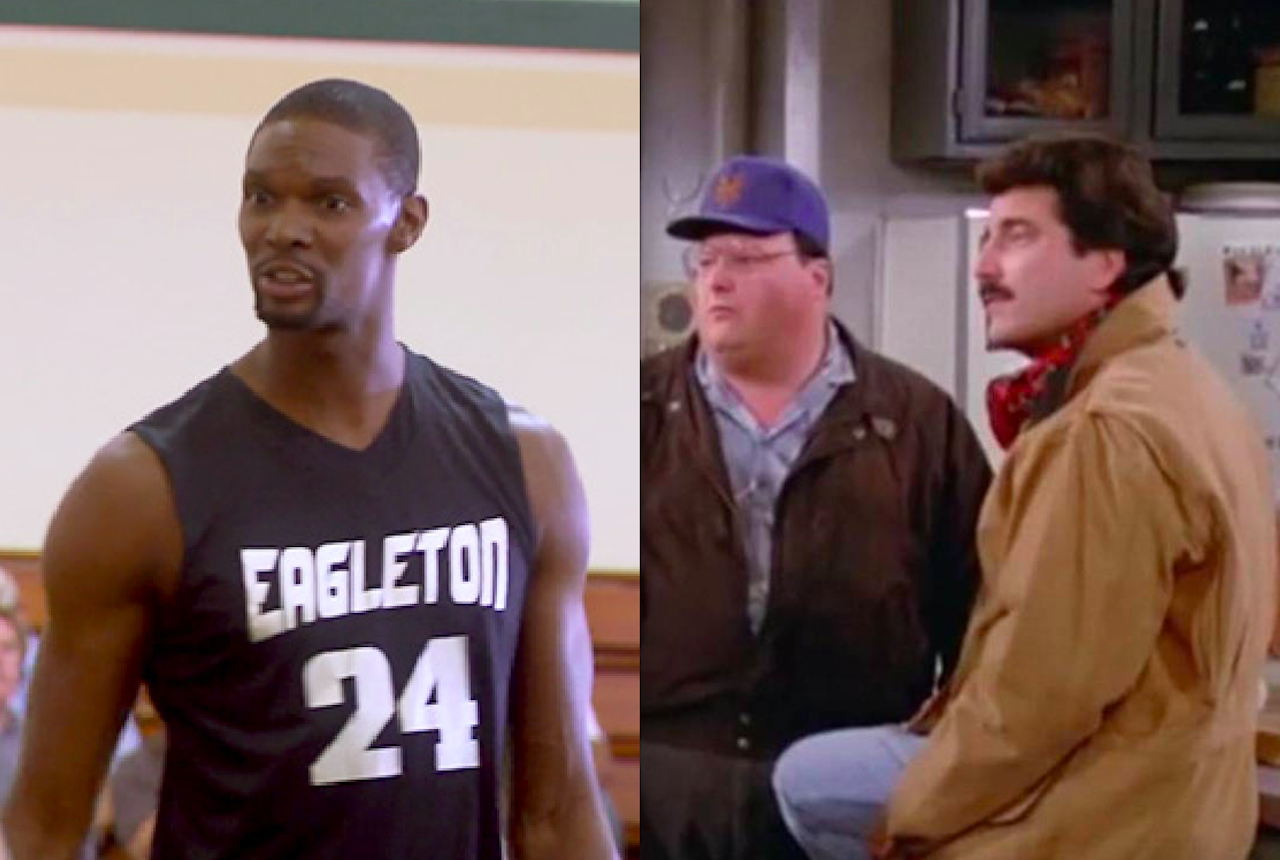 What are the funniest TV cameos by athletes?

Being a professional athlete is hard, requiring countless hours of commitment. Which is why it isn't shocking that so few pro athletes can act — you try learning a brand-new craft after a lifetime in the gym. But certain athletes can pull it off on the strength of their charm alone, particularly in the comedy arena. And likewise, some showrunners are masters of bringing the funny out of jocks who otherwise couldn't draw a laugh from their own parents. Check out our list of the funniest TV cameos by athletes, in no particular order.

When George's girlfriend gets mono in "The Abstinence," he's forced into celibacy for six weeks. But the imposed dry spell has a side effect — undistracted by sex, George masters everything from Portuguese to hitting home runs. "Hitting is not about muscle. It's simple physics. Calculate the velocity, V, in relation to the trajectory, T, in which G, gravity, of course remains a constant," he tells Jeter and Williams before smacking a dinger. "It's not complicated."

In his arc on two-part episode "The Boyfriend," Keith and Jerry become friends when the 1979 NL MVP  tells the comedian he's a fan, to the disbelief of George. But Jerry gets jealous when Keith starts dating Elaine and spending more time with her. Illustrated by a "JFK" spoof, Kramer and Newman accuse Keith of spitting on them at a past Mets game, but the first baseman unveils the real culprit: Mets teammate Roger McDowell, or the "second spitter."

Apprently, Larry David is the patron saint of working hilarious athlete cameos into his TV shows. In "Shaq," Larry draws the ire of the entire city of Los Angeles when he attends a Lakers game and stretches out his legs while in the front row, tripping and injuring the legendary center in the process. Then Shaq reveals he's a huge "Seinfeld" fan, and Larry exposes Shaq's doctor as a "Scattergories" cheater, so the two make up.

Richard Lewis' new girlfriend is black, and he's insecure because of a stereotype about black men. After some brutally cringeworthy research, Larry assures Richard he has nothing to worry about. But that all changes when the pair of friends run into the retired 5'3" NBA point guard in a men's bathroom.

[dx_custom_adunit desktop_id="RTK_K67O" mobile_id="RTK_5yk0"] Buckner's always had a remarkably good sense of humor about his committing possibly the most infamous error in baseball history, when he let a dribbler through his legs in Game 6 of the World Series. It shows in "Mister Softee." Buckner fails to catch an autographed baseball, thrown to him by Larry, which then falls over a balcony. But he redeems himself by catching a baby who's been thrown from a burning building.

While attempting to break Wade Boggs' disputed record of beers downed on a flight in "The Gang Beats Boggs," Charlie drinks so much he hallucinates and sees the Hall of Fame third baseman's ghost — even though he's very much alive. That fact eludes Charlie throughout the episode, inspiring him to repeatedly utter "May he rest in peace."

[dx_custom_adunit desktop_id="RTK_K67O" mobile_id="RTK_5yk0"] In "The Gang Gets Stranded in the Woods," a season after Mac professed his undying fandom for Chase Utley, the then-Phillies star finally meets up crosses path with two of the lowlives — but not Mac, to his dismay. While Dee, Mac, and Frank struggle to survive in the wilderness, Dennis and Charlie find their way to a charity event, where they meet Mac's favorite player and Dee's crush (Howard).

Schrempf appeared on the sitcom three times. In "Telethon," his first episode, Leslie lands the former Pacers star as the headlining guest of a charity event. But Tom brings Detlef to The Snakehole Lounge first, where the diminutive body man gets wasted on, as Detlef stresses, "two light beers."

In his first of three appearances on the NBC comedy, Hibbert joins former Pacers star and "Parks and Rec" veteran Detlef Schrempf in being hired to do nothing but shoot hoops at the offices of Tom and Jean-Ralphio's production company, Entertainment 720. The young entrepreneurs ignore the hoopers' financial advice, and it blows up in their faces.

[dx_custom_adunit desktop_id="RTK_K67O" mobile_id="RTK_5yk0"] Though I guess he's not playing himself in the episode, Bosh's brief appearance as the star of Eagleton High School's basketball team is too good to exclude. "They're 50 points ahead and they're still dunking. I mean, look at this guy. There's no way he is in high school," Leslie complains before Bosh dunks on a tiny Pawnee player. Bosh punctuates his throwdown by shouting at his victim, "And I'm better at French horn than you, Derek!"

When the men of "Parks and Rec" throw an impromptu joint bachelor party, Chris makes Andy's dream come true by introducing the group to Wayne and Luck on the field at Lucas Oil Stadium. But before throwing a touchdown pass to Andy, Luck joins in on the "Parks" tradition of metaphorically crapping on Garry "Jerry"/"Larry"/"Lenny"/"Terry"/"Barry"/"Gerry" Gergich.

When Drama thinks he's the mark in Pauly Shore's "Punk'd" knockoff, called "Gotcha," he lands himself on Chuck Liddell's bad side. Drama then shows up to the legendary UFC fighter's charity event to apologize, and is humiliated in the middle of the room before finding out he was right all along.

[dx_custom_adunit desktop_id="RTK_K67O" mobile_id="RTK_5yk0"] It feels like there's an NFL cameo in every episode of "The League," but Marshawn's second appearance in the show sticks out. In the premiere of the seventh season, Lynch attends Taco Corp.'s annual board meeting and rips the Seahawks for their doomed decision to pass on the goal line in the final seconds of Super Bowl XLIX.

Ilana hits it off with Blake at a club and doesn't realize who he is. Abbi gives her a shocked look. "Gingers have souls!" Ilana assures her best friend, who then explains that Griffin "plays for the N. B. A!" Ilana then takes him home. "I thought he'd be a stamp in my sexual passport, because you know I've never been with someone over six-five."

In the two-part episode "Someday Your Prince Will Be in Effect," Bo is one of a few celebrities to appear in Will's dreams. He comes around in search of some culinary advice ("I'm throwing this formal dinner party. And when it comes to cooking, Bo don't know diddly") before Will connects the two-sport star with Heavy D.

[dx_custom_adunit desktop_id="RTK_K67O" mobile_id="RTK_5yk0"] "Welcome to 'Metta World News.' In sports, I'd rather eat my hand than to have my penis cut off," the man formerly known as Ron Artest tells the camera. "I'd really have to believe someone was gonna cut it off. But if I did, I could definitely eat my hand. I know because I had a dream where I did it. It was horrible. I ate my whole hand. Now that's what you call 'rhetoric.'"

Cutler regularly finds himself on the butt ends of jokes, often deservedly. But he deserves tons of credit for volunteering to take part in an episode that rips him. "Nice to meet you. I mean, you kinda suck but my dad says you might be good someday," Stan Marsh tells him. Cutler told ESPN of the cameo: "I thought it was funny. They can make fun of me if they want to."

In the episode "Give a Little Bit," Matt Damon and LeBron James team up to give Vinny crap for giving so little to Damon's charity; $10,000 isn't enough for someone flying in a private jet to Italy. A flustered Vinny says he'll match whatever LeBron donated, but that changes when the superstar tells him, "I gave a million, Vince."

[dx_custom_adunit desktop_id="RTK_K67O" mobile_id="RTK_5yk0"] When Peter and the guys head to San Francisco in "Passenger Fatty-Seven," he bumps into the Warriors superstar, who grants Peter's request to sit on Curry's lap during a postgame press conference, a la Riley Curry. Curry's just as patient with Peter, who tells the point guard and the reporters, "I dooked."