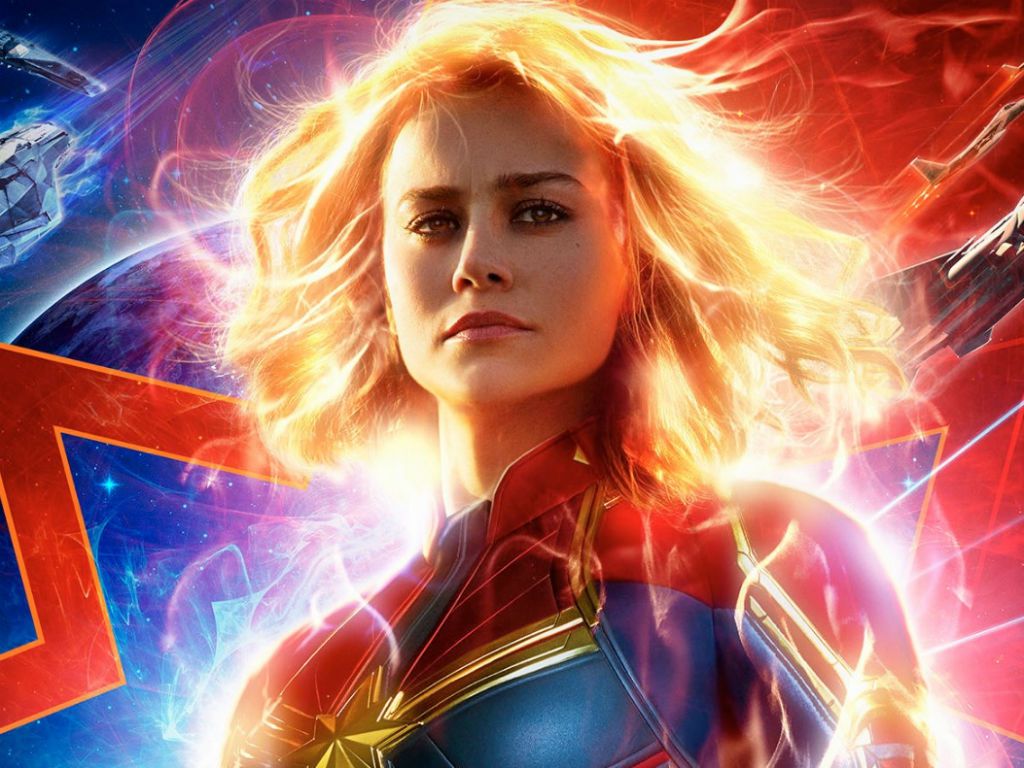 New movies come out every week. Who can keep up with all of them? And some of the movies, they're bad. Really, really bad. You hate to see it. But don't worry, because we know what all the best movies of 2019 are. Spend your money on these recent releases, and you won't be disappointed...

Mindy Kaling wrote and stars in this unflinching portrayal of a woman who's hired to be the only female writer in the writers room of a late-night comedy show. Kaling based the screenplay on her own experiences as the only woman in the writer's room of "The Office."

This sci-fi drama written and directed by Julia Hart is the unflinching portrayal of a young woman with supernatural powers — her seizures cause earthquakes. On the run from scientists who want to subject her to creepy experiments and stuff, Ruth returns to the family she abandoned.

This horror flick combines the Wild West with supernatural terror in the unflinching portrayal of a woman driven to madness by her isolated existence on the wild frontier plains. Even if you don't like the film, it has the good taste to get in and get out at an award-worthy 86 minutes long.

"Long Shot" stars Seth Rogen and Charlize Theron in an unflinching portrayal of a journalist and a presidential candidate, respectively, who fall in love. In a huge acting stretch for Rogen, his character is a goofy, schlubby dude who's in over his head and punches above his weight romantically.

Based on the 2003 novel by Susan Choi, "American Woman" is the unflinching portrayal of a former political radical harboring three fugitives, one of whom, the kidnapped granddaughter of a newspaper tycoon, has Stockholm syndrome. It's based on Patty Hearst's real-life kidnapping.

"High Life" is a science-fiction horror film. It's the unflinching portrayal of a group of criminals who are sent on a space mission to explore a black hole. Critics praised the movie's impressive visuals and challenging plot. It's prolific French writer/director Claire Denis' first English-language film.

Ari Aster wrote and directed this unflinching portrayal of the titular Swedish midsummer festival. If you thought "Hereditary" was a good movie, maybe you'll like "Midsommar" too, because it's writer/director Ari Aster's follow-up to "Hereditary."

'The Art of Self-Defense'

Riley Stearns' dark comedy "The Art of Self-Defense" is an unflinching portrayal of toxic masculinity in American culture. Jesse Eisenberg stars as a meek accountant who, after thugs attack him on the street, enrolls in self-defense classes. Critics praised the film's dark humor and thriller elements.

Told in just five extended scenes set over a period of 10 years, "Her Smell" stars Elizabeth Moss in an unflinching portrayal of a punk rock star on a long downward spiral of substance abuse and self-destruction. The movie also stars Amber Heard and Cara Delevingne.

'The Lego Movie 2: The Second Part'

Finally, a sequel to cinema history's most successful feature-length toy commercial. It's the unflinching portrayal of overpriced pieces of Danish plastic that speak in the voices of your favorite celebrities. Take your kids if you want them to annoy you forever to buy them those expensive-ass toys.

'Once Upon a Time in Hollywood'

Leonardo DiCaprio and Brad Pitt star in Quentin Tarantino's unflinching portrayal of a fictional film star and his best friend/stunt double working in Hollywood in 1969. The film depicts many real-life figures, notably Charles Manson, Sharon Tate and others involved in the Tate-LaBianca murders.

'The Boy Who Harnessed the Wind'

"The Boy Who Harnessed the Wind" is the writing and directing debut of actor Chiwetel Ejiofor, star of "12 Years a Slave" and the live-action "The Lion King." It's the unflinching portrayal of William Kamkwamba, a boy who built a wind turbine to power his family's home in Malawi.

Elton John himself picked Taron Egerton to play him in this unflinching portrayal of the singer's life from childhood to the early '80s. The movie contains more fantasy elements than most rock biopics, with various characters singing and dancing to Elton John songs in musical set pieces.

'The Kid Who Would Be King'

This kid's film, a modern take on the King Arthur legend, was a huge box-office bomb despite an enthusiastic critical reception. Perhaps the movie, the unflinching portrayal of a boy in 2019 England rediscovering Excalibur and fighting the forces of evil, was too silly for most families.

"Missing Link" is the latest effort from Laika, the animation studio behind "Coraline" and "ParaNorman." Despite rave reviews from critics who praised the film's story and visuals equally, this unflinching portrayal of an English explorer who encounters a Sasquatch tanked hard at the box office.

"Souvenir" is the unflinching portrayal of a young film student who falls for an attractive and well-off young man. But their relationship goes south when it becomes clear he's a heroin addict. If that depressing plot sounds like fun watchin' to you, check out "The Souvenir." It's supposed to be good.

Well, everyone knows most of Emily Dickinson's poems went unpublished during her lifetime because she was so crippingly shy, self-loathing, morbid and reclusive. What this movie presupposes is... maybe she wasn't? "Wild Nights With Emily" is the unflinching portrayal of Dickinson's private life.

Shazam was once the most popular DC superhero, more popular than Superman. But for the last half-century or so, he's been third-tier loser. Now, "Shazam!" is the unflinching portrayal of a superhero so lame that he had to change his original name, Captain Marvel, because of lawsuits.

'How to Train Your Dragon: The Hidden World'

"Gloria Bell" is the unflinching portrayal of a divorced woman in her 50s struggling to find happiness. The film stars Julianne Moore in the title role, John Turturro as a man with whom she has a romance, Brad Garrett as her ex-husband, and Michael Cera and Caren Pistorius as her adult kids.

"High-Flying Bird" is the unflinching portrayal of a sports agent (André Holland) who pitches a rookie player (Melvin Gregg) on a game-changing business opportunity. The film's earned praised both for its depiction of the sports industry and for Steven Soderbergh's innovative direction.

"Giant Little Ones" is an unflinching portrayal of Generation Z Canadians dealing with their developing sexuality, sexual identity and young-adult lives in the 21st century. Critics praised the film's nuanced and modern take on coming-of-age teen dramas as well as its talented young cast.

'Fighting With My Family'

Call 2019 the Year of Florence Pugh. She is the star of both "Midsommar" (found elsewhere on this list) and this film, an unflinching portrayal of the life and career of the mononymous professional wrestler Paige and her dysfunctional but eccentrically lovable wrestling family.

"The Last Black Man in San Francisco" is the unflinching portrayal of a young black man who struggles to save the old Victorian house his grandfather built and in which he grew up. The film's screenplay is based on a story that director Joe Talbot and star Jimmie Fails wrote together.

"Diane" stars living legend Mary Kay Place in the unflinching portrayal of an aging, widowed baby boomer living a quiet life in rural Massachusetts, visiting with friends, going to church, and taking care of her drug-addicted 30-something loser son who's been dragging her down all his life.

Jordan Peele's follow-up to his instant classic "Get Out," "Us" is the unflinching portrayal of a family who are terrorized by their own doppelgangers, evil twins from a parallel world. The film broke new ground in horror and also ruined "I Got 5 on It" for everyone forever.

"Avengers: Endgame" is the 22nd movie (for f---'s sake) in the Marvel Cinematic Universe. It's the unflinching portrayal of 34,719 superheroes who fight the bad guy who snapped his fingers and erased half of all life in the universe at the end of the "Avengers" movie that came out last year.

"The Mustang" is the unflinching portrayal of a convict who's been incarcerated for 12 years but who learns to love again (or whatever) through a prisoner rehabilitation program that involves training wild horses, so I guess you really can just write a movie about anything.

Tessa Thompson and Lily James star in this unflinching portrayal of two sisters who, after their mother dies, fall into running drugs across the U.S./Canadian border. "Little Woods" is the feature-length writing and directing debut of the filmmaker Nia DaCosta.

The directorial debut of actor Olivia Wilde, "Booksmart" is the unflinching portrayal of two total dweebs, Molly and Amy, who realize they wasted their high-school years not having any fun so they decide to have fun. It stars Beanie Feldstein and Kaitlyn Dever as the two fun-having dweebs.

The latest CGI cash grab from aging-dinosaur Disney subsidiary Pixar, "Toy Story 4" is the unflinching portrayal of a bunch of talking toys who talk (and go on adventures) only when humans aren't around. Do you really need it explained? It's a "Toy Story" movie, you know what the deal is by now.

Nora "Awkwafina" Lum stars in "The Farewell," the unflinching portrayal of a Chinese-American woman who must reckon with the complicated differences between her American values and her Chinese family's traditionalism. Writer/director Lulu Wang based the film's story on her personal experiences.