Celebrities That You Would Never Guess Are Related 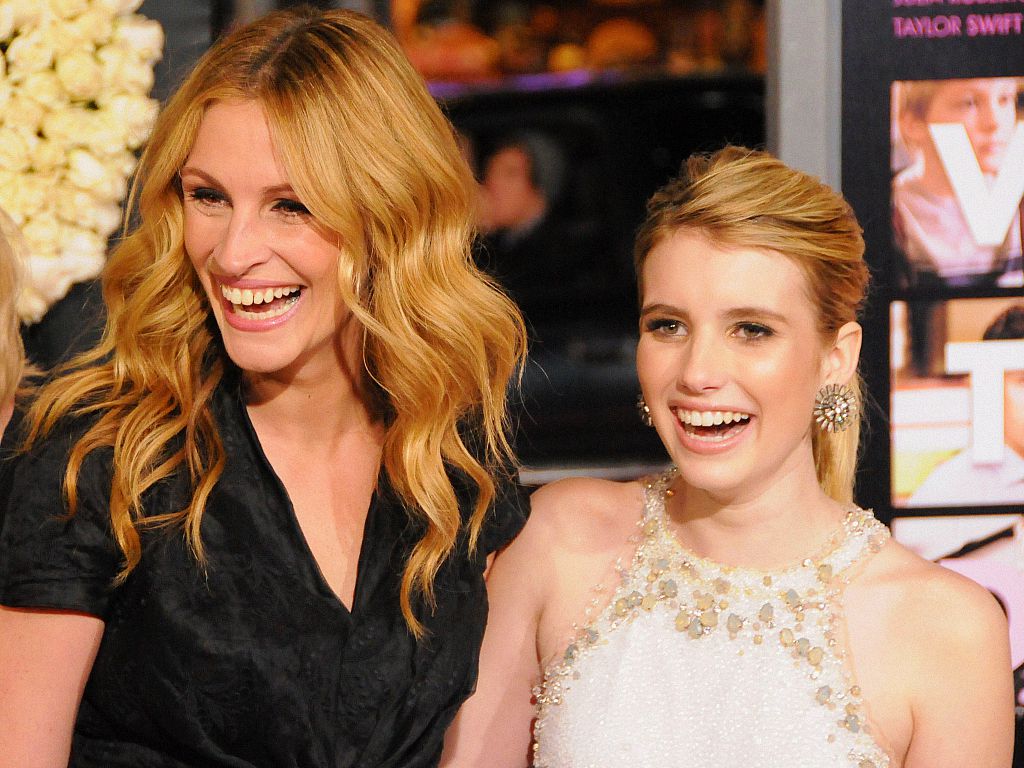 Sometimes fame isn't stumbled upon by luck, it just runs in the family. These celebrity connections might surprise you, and have you wondering what other famous faces share a hidden connection. Which actor has a connection to Queen Elizabeth? And which two hip hop legends are actually first cousins? Find out below!

"Booksmart" actress Beanie Feldstein may be a breakout star, but she isn't the first in her family. Her brother is none other than "Wolf of Wall Street" actor Jonah Hill. While it seems the family is blessed by luck, they've had their share of misfortunate as well. Their older brother, Jordan, died suddenly of a pulmonary embolism in 2017 when he was 40 years old.

Music mogul Quincy Jones is father to actress, director and producer Rashida Jones. Rashida even directed a documentary about her father. "Quincy" is streaming on Netflix and the film covers his prolific career.

"Almost Famous" star Kate Hudson has acting in her DNA. She got it from her mother, actress Goldie Hawn. The two have a close relationship. “We can cry on each other’s shoulder and laugh in each other’s faces,” said Hawn. “My mom is my great confidante! I pretty much tell her everything," said Hudson.

If you discovered actress Allison Williams via her breakout role as Marnie on "Girls," you may not be aware of her famous father. He's none other than news anchor Brian Williams. When Brian was suspended from NBC for fabricating a story about his coverage of the Iraq war, Allison defended him. "He has so much integrity. He cares so much about journalism," Allison said.

Actress Jamie Lee Curtis is an icon. Her debut role was in classic horror film "Halloween". Her mother, Janet Leigh, was no less iconic, also for a horror classic. She played the doomed Marion Crane in Alfred Hitchcock's "Psycho."

No, the two don't only share a last name. They share DNA. Melissa and Jenny McCarthy are cousins. Not only that, Jenny helped Melissa land her first role. She gave Melissa a spot on her sitcom "The Jenny McCarthy Show."

This would be more obvious if Tom went by his birth name, Thomas Cruise Mapother. Not only are they related, but the "Mission Impossible" star has even helped the "Lost" actor. "Tom has been kind enough a couple of times to suggest to a director, 'If you're looking for an actor, why don't you audition this guy?'" Mapother said. "So it has opened a couple doors, but it hasn't gotten me any roles."

Rocker Lenny Kravitz's mother was "The Jeffersons" actress Roxie Roker. Roxie is Al's cousin. That makes Roker and Kravitz cousins. "All I know is I'm going with it," Roker said. "Kids think it's cool."

Johnny Depp and Queen Elizabeth are distant cousins (20th cousins, to be exact) due to a connection to Edward III, a king with many children who died in 1377. Other celebrities with a royal connection include Hilary Duff, Brooke Shields and Beyoncé. In fact, millions of people can trace their genealogy back to British royalty.

"The L Word: Generation Q" actress Katherine Moenning is cousin to actress Gwyneth Paltrow. She resists comparisons, however. “We’re totally different people," Moenning said. "And I want no one judging me solely on the fact that I am her cousin."

Who knew that these two music legends were related? Snoop let the world know after they collaborated on the song 'Special,' produced by Pharrell. "Brandy's my first cousin. We never really told the world because we weren't trippin' off of that, but that's my family," Snoop said.

How can one family be so full of talent? Their brood has not one, but two of television's greatest comedians. O'Brien has always been cagey about the relation. It's no wonder; by being third cousins, they're pretty distant relatives compared to others on this list.

Talk about a powerhouse family. "Scandal" star Kerry Washington is a cousin to former U.S. Secretary Colin Powell. They're related on Washington's mother's side. Through politics, shows about politics, and even the family name, this family is nothing but Washington connections.

The "Jurassic World 3" actress is daughter to famed director Ron Howard. If you think Bryce looks like actress Jessica Chastain, you're not alone. Ron once mistook Jessica for Bryce at an Apple store. "I don't want him to feel like, 'I couldn't recognize my daughter,'" Chastain said, "But, no, I literally walked by, and he was like, 'I think I saw Bryce.'"

"Black-ish" actress Tracee Ellis Ross has fame in her roots. She's the daughter of music legend Diana Ross. Tracee has said she likes to "borrow/steal" things from her mother, which her mother isn't always pleased about. Tracee has even shared that when she went to college, she wanted a rug that Diana didn't want to give her. Eventually, Diana chased her down the driveway with it so she could have it.

"Teen Witch" actress Robyn Lively is a half-sister to "Gossip Girl" actress Blake. Their mother is Elaine Lively. The two have been spotted out on the town together in the past. They've even been known to hit the red carpet along with their mum.

"Fifty Shades of Grey" actress Dakota Johnson is daughter to actress Melanie Griffith. It's almost unfair to limit the family celebrity there, though. Johnson's father is actor Don Johnson. Though the two are close, when Griffith was asked if she would ever watch Johnson in "Fifty Shades," Griffith replied, "I don't think so."

Actress Julia Roberts is aunt to actress Emma Roberts. Emma, who is known for her role in "American Horror Stories" is the daughter of Eric Roberts. Eric is Julia's brother. While she was growing up, Emma spent time on some of the set of Julia's films, which first sparked her interest in acting.

Mamie Gummer sure is a chip off the old block! On top of sharing mother Meryl Streep's good looks, she also shares her penchant for acting. Gummer has starred in "Emily Owens" and appeared on "The Good Wife" and "The Good Fight." It's brave to get into your mother's profession when she's Meryl Streep; those are some mighty big shoes to fill.

While this is widely reported, the connection described is often confusing, at best. At its simplest: Jason Schwartzman, Nicolas Cage and Sofia Coppola are all first cousins. The common thread is Francis Ford Coppola, Sofia's father. His sister is Jason's mom, and his brother is Nicolas's dad. Simple enough?

These two legends of comedy are uncle and nephew! Actor Jason Sudeikis's uncle is "Cheers" alumnus George Wendt. “He was just a good example that being an actor was a viable option," Sudeikis said. "Here’s a guy from the Midwest, in my family, who took the road less traveled and it worked out for him. The advice he gave me, and I say this jokingly, is ‘Get on one of the best sitcoms of all time and then ride it out.’”

"Game of Thrones" actor Alfie Allen and singer Lily Allen are actually brother and sister. Not only that, but she wrote a song about him. It isn't anything to be too enthused about, however. The song, 'Alfie,' written years ago, was about how aimless he was. Here's a sample of some of the lyrics:

Oh Alfie, I just can’t sit back and watch you waste your life away.
You need to get a job because the bills need to get paid.

Luckily for her, he seems to have turned out okay.

No, this pair don't just share a distinctive last name. The two are sisters and both are heavy-hitters in television. Zooey starred in hit comedy "New Girl", while Emily starred in long-running drama "Bones." Emily didn't always want to be an actress, though. "I think we both loved doing plays since we were really young. But I didn't think of doing it as a profession. I think Zooey knew she wanted to be an actress from when she was very young. Whereas I didn't think I wanted to do that," Emily said. Good thing she changed her mind.

"Fantastic Beasts" star Katherine Waterston is the daughter of "Law and Order" legend Sam Waterston. His success, however, wasn't necessarily the leg up you might think it would be. "When you are the kid of an actor, it's always a very inviting world," Waterston said. "Everyone is nice to you, the hair and make-up people braid your hair and play with you, and the costume department makes outfits for your teddy bears. It's really misleading, because then when you actually go to pursue a career in acting, you realize that people aren't so friendly."

Does breakout "Once Upon a Time in Hollywood" star Margaret Qualley's face look familiar? If it does, it might be because she's the daughter of actress Andie MacDowell. Qualley is very gracious about where she came from. "I’m well-aware doors have been opened for me," she said. "I was given opportunities from a very young age that I would not have otherwise had.”