Books From Your Childhood That You’ll Remember Instantly 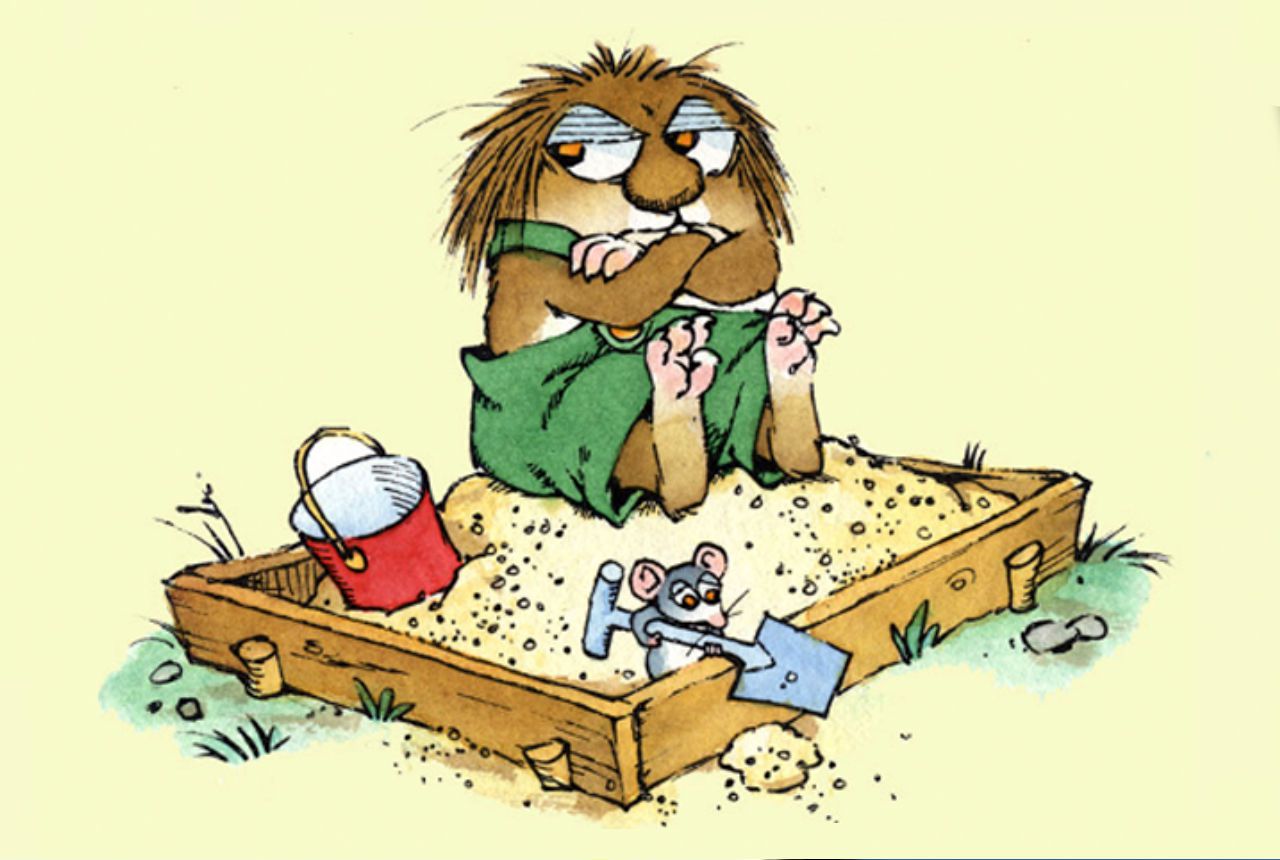 How much do you read as an adult? And no, your phone doesn't count. Because we're talkin' honest-to-goodness pieces of paper bound together. Also known as books. If it's been a minute since you've cracked a good one open, a trip down the library of memory lane might inspire you. Check out some of your childhood books, and take a look. It's in a book!

Some book covers feel tactile. Like you can touch the subject and feel it for real, not just the paper. The Very Hungry Caterpillar achieves such a feat, and the inside ain't bad either. Eric Carle's book, which sneakily shows us where butterflies come from, won several children's book awards, and was even endorsed by the Royal Entomological Society

[dx_custom_adunit desktop_id="RTK_K67O" mobile_id="RTK_5yk0"] Lois Lowry's dystopian novel is harrowing and poignant to this day. It depicts a world without color, dreams, or joy -- except for one young boy, who must feel it for everyone. The book won the Newbery Medal, but was also regularly censored and removed from children's libraries for its intense, sometimes disturbing content.

Wouldn't you like to move to Stoneybrook, Connecticut? Or at least vacation there? Because the characters at the center of The Baby-Sitters Club series, written by Ann M. Martin, make it seem so quaint, authentic, and lived in -- even as they squabble and struggle. The books were eventually adapted into a TV series and a standalone film.

When Zachary Beaver Came To Town

The tale of a morbidly obese child who works as a sideshow freak, When Zachary Beaver Came To Town is a mature, sensitive, sad, and touching children's novel by Kimberly Willis Holt. It won the National Book Award for Young People's Literature, and was adapted into a movie starring Jonathan Lipnicki, Jane Krakowski, and Eric Stolz.

Where The Sidewalk Ends

[dx_custom_adunit desktop_id="RTK_K67O" mobile_id="RTK_5yk0"] Shel Silverstein, the multi-talented author, illustrator, musician, and total weirdo, made a huge cultural splash for folks of a certain age. Beyond classics like The Giving Tree, he dropped several volumes of absurdly funny, sometimes touching, and borderline subversive poetry. Where The Sidewalk Ends is his first collection.

Earning a Newbery Honor, Coretta Scott King Honor, and Golden Kite Award, The Watsons Go To Birmingham -- 1963 is Christopher Paul Curtis' take on the civil rights traumas of America, through a relatable family story. It was adapted into a Hallmark movie in 2013, starring Anika Noni Rose and David Alan Grier.

Could you survive being stranded in the wilderness? If you've read Gary Paulsen's classic Hatchet, you might at least think you have a fighting chance. It's a gripping, harrowing, real-time story about a young man's fight against nature, after a plane crash. Our first tip? Don't eat any berries.

[dx_custom_adunit desktop_id="RTK_K67O" mobile_id="RTK_5yk0"] Sharon Creech's novel didn't talk down to its younger audience, and it won the Newbery Medal as a result. It's a story told through a Native American perspective, and it touches on mature themes like grief, feminism, and maternal relationships. The novel's title came to Creech from a fortune cookie, reading "Don't judge a man until you've walked two moons in his moccasins".

A Series Of Unfortunate Events

A Series Of Unfortunate Events has recently enjoyed a series of fortunate Netflix episodes. But true believers know the property from a surprisingly dark, complicated, series of original books crafted by Lemony Snicket (a pseudonym for Daniel Handler). The books introduce ideas of death, metatextualism, and pessimism versus optimism. They're equal parts funny, sad, and funny-sad.

Would you want to live forever? If you grew up reading Natalie Babbitt's seminal Tuck Everlasting, about the titular character's struggle with immortality, your answer might be complicated. The work has, quite appropriately, enjoyed a long shelf life, including two film adaptations and a Broadway run.

Roll Of Thunder, Hear My Cry

[dx_custom_adunit desktop_id="RTK_K67O" mobile_id="RTK_5yk0"] Mildred D. Taylor wrote several works about the Logan family, but Roll Of Thunder, Hear My Cry was her most acclaimed and well known. It's a searing, matter-of-fact depiction of early racism in America, and it won Taylor the Newbery Medal. A made for TV movie was made starring Morgan Freeman in an early role.

The Rainbow Fish, written by Marcus Pfister, offers a great lesson for modern society. It's fun to look good and show off, as long as you share those good feelings with those around you. So the next time you feel like posting a dope selfie, donate to a charity at the same time.

Scary Stories To Tell In The Dark

If you read any of the Scary Stories To Tell In The Dark books, we apologize for how traumatized you must be. Not only are Alvin Schwartz's stories simple, elementally frightening, but Stephen Gammell's drawings are, to put it bluntly, fuel for one's nightmares. Harper-Collins rereleased the books with alternate illustrations, and received critical backlash for the perceived censorship.

[dx_custom_adunit desktop_id="RTK_K67O" mobile_id="RTK_5yk0"] Sure, the tales within The Stinky Cheese Man might be "fairly stupid", but they're more than fairly funny, too. Jon Scieszka wrote a series of absurd takes on classic fairy tales, and the results are perfect for the kid whose sense of humor is more developed than the rest of the class.

Beverly Cleary wrote a series of books about Ramona Quimby, a young girl who bounds through life with fearless abandon, while learning what it means to grow up. Several of the books are award winning, and the series was adapted into a 2010 Selena Gomez-starring film called Ramona and Beezus.

If you've read Pat The Bunny, your fingers must be tingling. Because Dorothy Kunhardt's children's classic is full of different materials to touch, including the titular character's fuzzy belly. Kunhardt wrote the book in 1940 as an experiment. Her daughter, Edith, was her inspiration.

[dx_custom_adunit desktop_id="RTK_K67O" mobile_id="RTK_5yk0"] Prescient to this day, Monster is the story of a black teen from Harlem on trial for murder. It's written by Walter Dean Myers in an experimental form -- as the main character is an aspiring filmmaker, the novel is mostly written in screenplay format, while sometimes shifting to a first-person diary. It won the Michael L. Printz award, and a film adaptation is forthcoming.

Are You There God? It's Me, Margaret.

Judy Blume is the master of adolescent trials and tribulations. Are You There God? It's Me, Margaret might be her masterpiece. It tackles complicated subjects like religion, puberty, and sexuality. Time named it one of the best 100 novels ever written, even as it was frequently challenged for its frank subject matter.

The title character is not a maniac, in the sense of causing anyone danger or instability. Rather, Maniac Magee is named as such for his incredible athleticism, even as he deals with homelessness. Jerry Spinelli's novel also tackles racism and familial abuse head on. A Nickelodeon adaptation aired in 2003, adding a strange subplot about aliens.

[dx_custom_adunit desktop_id="RTK_K67O" mobile_id="RTK_5yk0"] This book is impossible to read without crying. Love You Forever tells, with a few words and pictures, the circle of life. Author Robert Munsch charts a mother-son relationship from start to finish, all centered around a lullaby. Munsch wrote the book after experiencing stillborn children with his wife -- since then, the two have adopted three children.

What a bonkers punishment. A juvenile detention facility in which, for no good rhyme or reason, those sentenced must dig holes. Over, and over, and over again. Louis Sachar sneaks a healthy dose of existentialism into his YA novel, and while the Disney film adaptation adds a fun rap song, the OG book is the way to go for complex emotions.

The cover forebodingly offers an anonymously confessed series of sordid episodes, all about the nefarious world of drug addiction. For those who bought into this conceit of Go Ask Alice, it worked, shocking and horrifying teens worldwide... until they realized that it was actually a work of fiction, written by Mormon therapist Beatrice Sparks.

The Ear, The Eye And The Arm

[dx_custom_adunit desktop_id="RTK_K67O" mobile_id="RTK_5yk0"] Afrofuturism is a particularly interesting subset of science fiction, usually enjoyed by adults. But Nancy Farmer gave children a gateway taste with The Ear, The Eye And The Arm, a young adult novel with equal depictions of dystopian future and African culture. The novel earned a Newbery Honor, and while Farmer hasn't written any sequels, the rest of her works often involve sci-fi and/or Africa.

If you have to speak to Amelia Bedelia, do not use any idioms, turns of phrases, or cultural sayings. Because she will. Take. Them. Literally. Created by Peggy Parish, Bedelia is a housekeeper who follows orders a little too closely. If she's told to dust the house, she will pour dust on top of the furniture. The series informed many children's senses of humor, and communicated that language can be fun.

Alexander And The Terrible, Horrible, No Good, Very Bad Day

Alexander And The Terrible, Horrible, No Good, Very Bad Day is about what you think it's about. A kid. Named Alexander. Having a terrible, horrible... you get it. Judith Viorst wrote an accessible, relatable book that speaks directly to children dealing with issues, while offering a practical lesson to learn. It speaks to us all -- even in Australia.