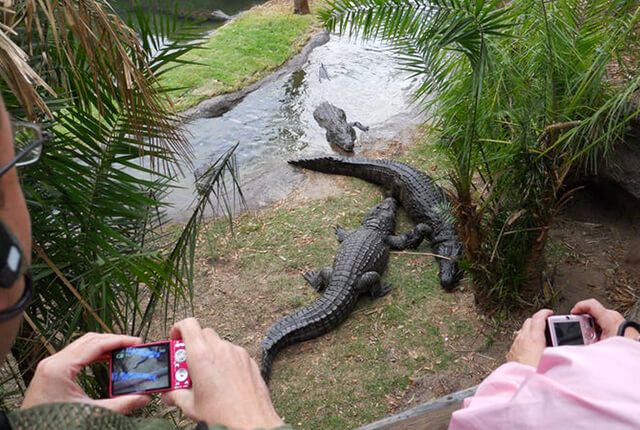 Disney parks and resorts have been keeping families around the world entertained for more than 60 years. And you may think you know everything there is to know about Disneyland. But think again. Because 60 years is plenty of time for the popular parks to accrue more secrets than the Evil Queen or Maleficent combined. So here are some Disney theme park secrets that will undoubtedly make your jaw hit the ground.

Disney Can Be Creepy

Workers must freak out after the park closes, cause the music keeps on playing. If that wasn't creepy enough, guests who misbehave get taken into the underground tunnels, told what they did wrong, and kicked out.

It's Full Of Cats

When Disneyland in Anaheim, CA opened, they had issues with rodents. So, after the theme parks close, employees release 200 feral cats to keep the mice population under control. But Mickey and Minnie get to stay.

You can Eat Plants In Tomorrowland

If you're one of those folks who love eating plants instead of fast food, you can always eat the plants in Disneyland's Tomorrowland. That's right! They're totally edible, but people will probably look at you funny.

Disney employees had code names for all sorts of incidents, like Code Baloo, which meant there was blood from someone injured. But when a toddler took a huge dump in a play area, one worker came up with "Code Pooh." Clever. So, so clever.

A Fairy Visit At Cinderella's Castle

Sit on the outer edge of the Plaza restaurant. You'll notice a wire going down from the castle to the restaurant's rooftop. So, request a seat under it, cause that's where Tinker Bell will come flying down.

Night Of Joy Is Anything But

The Night Of Joy is when Disney opens their gates to young Christians. Unfortunately, for park staff, it's hell on Earth. The've actually found guests doing not so Christian things behind bushes, and using illegal substances.

One of the secrets of Disney theme parks is that they have a network of tunnels that allow costumed performers to move inconspicuously underground. That way, no one runs into two identical characters at the same time.

Walt wanted all of his guests to feel special, so he created the red walkway to serve as a red carpet. It also keeps costumed performers away so that when they're walking on the red walkway, they're at a safe distance from onlookers.

The Danger Of Crocodile Bridge

Crocodiles are often fed from the bridge, so employees are told that if anyone is dumb enough to fall into the water, keep driving so no one else will notice what happened. But if you lean too close, you could end up eaten.

Disney Has No Electric Bill

It turns out that Disney theme parks have their own power plant called Reedy Creek Energy Services. RCES also handles natural gas, water, and sewage. So why would they bill themselves for services they own?

Performers Get A Real Kick

Some costumed performers wind up with bruises. Others get kicked in the groin, like one female performer who was kicked so hard in the crotch, she ended up in the hospital. For some reason, guests like kicking performers.

In "The Great Movie Ride" at Disney's Hollywood Studios, performers have to deliver their line perfectly. They only get three days to learn their lines, and if they say Okay instead of All Right, they have to start all over again.

The Secret Behind The Spitting Camel

Ever wonder how Aladdin's spitting camel always gets its target? Blame the human aiming behind the scenes. When they think they have a shot at hitting a guest, the MOFO will command the camel to spit water. Brilliant.

When you're in Frontierland, go to the railroad station and look at the lost and found box. You'll see the name "Smith" carved on a wooden leg, which is a reference to the "Mary Poppins" line, "I knew a man with a wooden leg named Smith".

Cinderella's Castle Has A Secret Suite

This may be one of the most well-kept secrets of Disney theme parks. Cinderella's castle has a 650-square-foot apartment which sadly, you can't book. Only rare giveaway winners can spend a night here. F*ck!

The Tree Of Life Can Never Die

If you're at Animal Kingdom and a hurricane hits, hide in this 145-foot artificial tree. It's made from components from an oil rig, so it can withstand just about anything. It'll be there long after we're gone too.

Liberty Square Is So Realistic

Holy Sh*t! Watch your step! That brown winding path you're walking on represents raw sewage. That's because indoor plumbing didn't exist in Colonial times, so you won't find toilets in this area either.

This is one of those secrets of Disney theme parks that really suck...literally. Small pipes vacuum trash through a network of tunnels at 60 mph. It takes 20 minutes, so you'll never someone picking trash from the bins.

If you look at the red velvet chairs in the hall, you'll see Donald Duck pop up in the back of the chairs. Ghosts also take notice of you when you fall out of the attic window in the Doom Buggy Ride of the Haunted Mansion.

As you exit Big Thunder Mountain, look left behind the fence. There's a Tinkerbell cut on the red rocks. Then check out the daughter's room at the Carousel of Progress. There's a photo of Walt on the upper left corner of the wall.

Fur character costumes weigh up to 47 lbs, so some performers end up with broken finger bones, bruises, and knee and shoulder injuries. In fact, 49 of 773 theme park injuries were because of these costumes.

At Disneyland's Main Street refreshment corner, you can have Mickey-shaped Chili Mac n Cheese. You can also enjoy "The Grey Stuff," a chocolate mousse referenced in the "Be Our Guest" song, at the Be Our Guest Restaurant.

Ever wondered why lions at the Animal Kingdom sit and pose for the perfect picture? It's because on the ledge of Pride Rock, there's piped chilled air, which encourages the lions to go there, giving you the ideal pose.

Disneyland in Anaheim, California has a private apartment above the fire station on Main Street. It was intended for Walt and his family. Ironically, the Victorian style suite hasn't changed much over the last 6 decades.

Walt Almost Lost It All

At a cost of $17 million, it took a year for Disneyland to be constructed. Ironically, when Walt was still a cartoonist, he filed for bankruptcy in 1923 because of debt incurred by his film studio Laugh-O-Gram.

You Must Be Thin To Wear Certain Outfits

Changing your hair and eye color is easy when you're a Disney character, but actors playing roles like Jasmine, have to be slender and toned. Especially when their costumes bare their midriff all day long!

You Can't See The Other Lands

Walt designed his theme parks so that if you're in Liberty Square, you wouldn't be able to see another land thanks to distractions like trees and buildings. Noises also help maintain the illusion, so you don't notice other lands too.

Theme parks use devices called Smellitizers to release certain scents like salty sea air at the Pirates of the Caribbean area. They also feature a scent of freshly  baked items on Main Street, and it's all part of Disney illusion.

Epcot Is So Organic

One of the things that make Epcot cool is the fact that they have a fully self-sustaining eco-system designed to grow edible plants. Disney himself dreamed of a future where humanity would be self-sustaining.