These Unbelievable Snapchat Burns Call For A Ton Of Aloe Vera 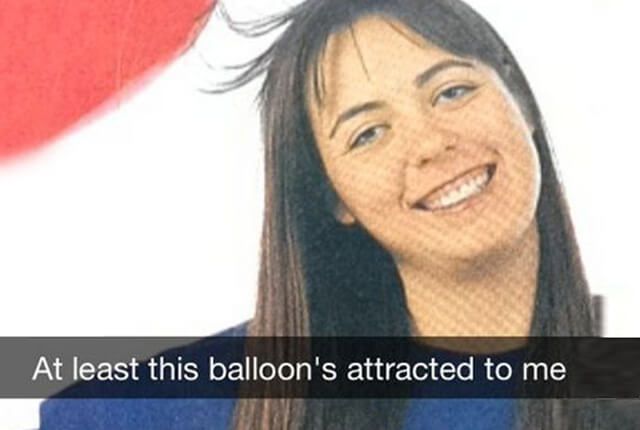 Verbal burns are truly the worst. At least when you're face to face, you can react to a harsh insult and respond with a witty comeback. But a social media burn? That leaves you with absolutely no recourse, at least not in the moment. So these Snapchat burns are only fun if you're the one dishing them out. If you're on the receiving end of these Snapchat insults, prepare to get third-degree burns.

See, honey? Here's the thing. The reason I cheated on you is because when it comes to manhood, he's three times the man that you will ever be. It's not personal. Geishas have needs.

Damn! Somewhere out there, there are gingers all over feeling dissed. Ya think that just because she's got the same hair color, the same smirk, and the same... oh, you know what, we see it too.

Lend Me Your Ear

That's pretty much symbolic of just about everyone we've ever met that we secretly don't like. As soon as they start talking, all you can hear is plenty of bullsh*t coming out of their mouths. Maybe you can forward this to them. No, you know what? Tag them. I triple dare you.

Well, we're guessing it's true what they say, there's always someone for everybody, or in this case, something for someone. But man! Is this one of the meanest snapchat burns or what? She ain't that bad!

We never noticed that "Malcolm in the Middle" star Frankie Muniz has Wi-Fi ridges on his forehead. That means you can take him to a remote part of the world on a vacation to get a wireless connection, which is more useful than his acting.

Things looked pretty bleak for Helen Keller, but "look" isn't exactly the word we'd use given that she couldn't see, hear, or talk. How else did you expect her outcome on life to be? Cheery? Got to give them extra brownie points for going the extra mile in this Snapchat burn.

Ouch! Well, look. At least this person won't have to worry about stage fright or performance anxiety, because there's no one to disappoint in the bedroom, but themselves. Bummer!

Ugh, whatever! It's not like Obama's never tried Starbucks! But it's funny as hell, if you can ignore the racist connotation. But are you sure she died here? Maybe she was was just laying down her milkshake to bring all the boys to the yard. Don't judge.

Wouldn't you like a shopping buddy who drives his own carriage, can blow smoke up your a**, and is also a wizard? With his magic, he can poof you out of the mall when security comes looking for you for that lipstick you stole.

Let's call it for what it is. Canadian singer Carly Rae Jepsen was good in her day, but her career is practically non-existent now. So let's just face reality, and hope she has something to look forward. Time of death: Somewhere around 2015?

The Boy Who Cried Ugly

So what makes this Spapchat burn so cool? It's the fact that it applies to anyone who takes a second to read it. But really, this one can seriously backfire if the person who got it is checking out this list. Brace yourself, as*hole.

This is a funny way of saying you've got a huge butt. But maybe these astronauts like big butts and they cannot lie. Who knows? Just hope that person doesn't turn over or they'll have a plastic enema tickling their spleen.

Yup! It's official. The American gas station chain, Sheetz, has just called you out. But don't you dare try and look all offended. You're just mad because they know what you've been doing every night, you naughty little thing!

You Are My Sunshine

You're someone's only sunshine, but you don't make them happy when the skies are gray. Seriously! You'll never know how much this guy hates you. So please, do him a solid and take his sunshine away.

Not only is that lady in the background getting the finger, but she's also getting Snapchat burned for being cray-cray. In fairness though that evil frown of hers is giving us the chills. Wonder if she's a teacher or worst... a judge at a court of law?

Can You See It?

You know it's sad when you think you're well endowed, or that you look hot AF not wearing anything, and posting nude pics online. Then she takes out her magnifying glass, which shrinks your manhood down to nothing. But hey, at least it's small enough to match your ding dong.

As far as Snapchat burns go, this one left blisters on this guy's skin. We recommend some aloe, and staying off the sun. We're not even going to mention the fact that a guy who can grow his own mustache is still using a Pokemon pillow cover.

Poor Bambie! It wasn't a hunter that got him. He tripped when his leg got tangled on this helium balloon. The sentiment is pretty nice, but unless this deer can spontaneously come back to life, it'll be recuperating in deer heaven.

"Supernatural's" Misha Collins, who plays the angel Castiel, was clearly taking up a second hobby while he was temporarily killed off between season 12 and season 13. Guess he was knitting a sweater for Sam and Dean.

You ever had one of those friends who is totally pissed one evening and isn't saying a word? Well, for that special thorn in your side, there's a snapchat diss for that. Just drop her off at a museum and drive off.

There seems to be something for everyone in "The Book." Why look! It even prophesized that you'd turn into an annoying lil b*tch when you came into this world. Looks like this prophecy has finally come to pass.

Just look at that smug little look on that guy's face. Sure, the dimples are cute, just like his bedroom eyes. But it seems like he hasn't been able to show his final form yet, as he hasn't gotten laid. We're positively sure someone will lend a hand.

There may be "50 Shades of Gray" but she's a cool gray, and you're just totally dull. Need proof? She just sent you this burn. Now all you can do is lick your wounds, or something else, cause she's obviously not coming back for seconds.

It looks like you're puckering up for something, buttercup! But since we all know you're not about to kiss someone, you left yourself wide open for one of the most hilarious snapchat burns around.

You're Such A Douche

This one's a double burn. Not only is she calling you a douche, but she' also saying you're disposable. As a bonus diss, you're also cheap as hell, cause they sell you at a dollar store. What did you do to this person to deserve this?

Oh, Rose, from "The Golden Girls" always knew how to be quippy, even though she was from St. Olaf and looks like an adorable little lady. But hey, at least she's smart enough to identify a threat when she sees one. So, why can't you?

So what are you trying to say? My mom's fat and she needs one of these to plug her chocolate starfish? Alright, we admit it. It's kind of true. Then again, many moms have been double dipping for decades, so who are you to judge?

It's that perfect Snapchat burn for that trashy friend, or enemy you pretend to be friends with. Knock, Knock! Anyone home? Oh well, we're sure you'll come home at some point. We'll hang out then.

So you thought you were a Greek Adonis in the bedroom the other night. Then you asked her out on a second date, and slapped you with this Snapchat burn. Suddenly you realized your little man isn't up for the job.

This may be the most painful diss of all because they're calling you fugly, and rejecting you in a second. But they used a hot pic of Justin Bieber, so you feel so f*cking conflicted.