Han Solo Is Literally The Worst, Here Let Me Prove It To You 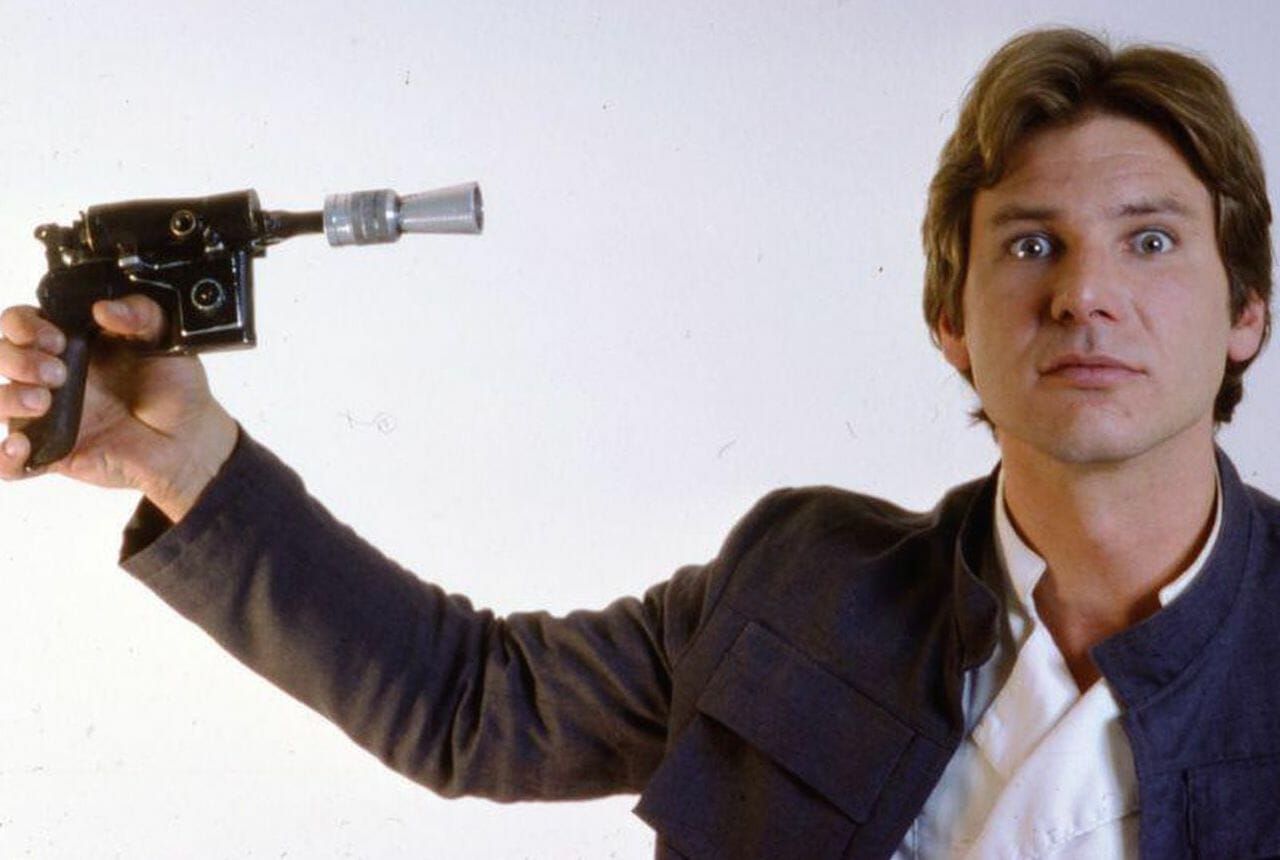 Han Solo sucks, actually, and I can prove it.

Fans often describe Han Solo from the Star Wars saga as a lovable rogue, a scoundrel, a scallywag. But I'd like to take it a step further and show you why Han Solo is actually the friggin' worst. From his selfishness to his spontaneous leaping into danger, Han Solo is terrible, a bad soldier, a bad smuggler and a bad friend. So grab a good blaster, kick back and come with us on a tour-de-force of Flyboy's many faults. Because the truth is that Han Solo sucks, and I'm about to prove it so hard.

Han’s signature clothing item is his black vest. He wears it in virtually any season, whether on a desert planet, a frozen wasteland, or a forest moon. It’s not exactly practical as sleeves probably come in handy in space, and it definitely comes across as part of a carefully orchestrated effort to appear laid-back and casual on Han’s part. We’re not buying it, though.

[dx_custom_adunit desktop_id="RTK_K67O" mobile_id="RTK_5yk0"] When Han meets Luke and Obi-Wan, he has no problem charging them an arm and a leg for transport off Tatooine. As Luke remarks, they could pretty much buy their own ship for what he’s asking. Now we know Luke and Obi-Wan are more than they appear, but to Han they’re just a poor farmboy and a random old man. Han has no problem ripping them off, and we’re happy to call him out for it.

Hates On The Force

Despite the clear awesomeness of the Force, Han is a serious skeptic in the beginning. He dismisses it has some “hokey old religion” saying he far prefers having a blaster at his side. When Luke demonstrates some skill in a reflex exercise, Han chalks it up to luck instead of reliance on the ever-present energy field. But eventually, the skeptic comes around and wishes Luke before battle, “May the Force be with you.” Talk about a Johnny-come-lately!

Han Solo constantly makes the mistake of thinking he knows more than everyone else. But in The Empire Strikes Back, he’s always one step behind the bounty hunter Boba Fett, who follows Han and his party throughout without their knowing it. It’s not until Han has been caught and carbo-frozen that the bounty hunter reveals himself and his sinister motivations.

[dx_custom_adunit desktop_id="RTK_K67O" mobile_id="RTK_5yk0"] Han Solo’s name implies that he prefers to look out for himself. And George Lucas has said that his main arc is to go from caring only about himself to caring about a common good. But it seems that Han might have been directly inspired by the character Simple Hans from Grimm’s famous fairy tales, who follows a very similar story arc by learning his place within a community. Who knew!

So Defensive! Complains Then Steals Ideas

Han has a real penchant for shooting down other people’s ideas, then taking them himself. For instance, in A New Hope, he’s quick to knock the plan to hop in the garbage shoot thus escaping enemy fire. But in Empire, he has the bright idea to hide his ship from the Imperials by, what else? Floating along with the garbage. Now where did we hear that one before?

In Empire Strikes Back, Han has the bright idea to land the Millenium Falcon in a cave on a giant asteroid. Of course, what he doesn’t realize is that he’s actually landed inside of the mouth of a humongous worm who lives in the cave, although retrospect reveals a few warming signs. For one, the two enormous rows of teeth? Not Han’s brightest move, not by long shot.

Doesn't Know What Parsec Is

[dx_custom_adunit desktop_id="RTK_K67O" mobile_id="RTK_5yk0"] Han loves to brag. When he meets Luke and Obi-Wan, he talks up how fast his ship can go, saying it made “the Kessel Run in under 12 parsecs.” That sounds pretty fast, until you learn that a parsec is actually a unit of distance rather than time. In other words, Han doesn’t know what he’s talking about, just blowing smoke and hoping not to get noticed.

The reason Han got in trouble with Jabba in the first place is because of a previous run-in with the Imperials. He was on a smuggling run for the sluglike gangster, and when he saw some Imperial ships coming his way, he ditched his stolen cargo and hightailed it into hyperspace. This offscreen moment of cowardice before A New Hope begins turns out to have serious, far-reaching repercussions, affecting events even as far as Return of the Jedi.

Doesn't Say I Love You

When Han is frozen in carbonite to be given to the bounty hunter Boba Fett, Leia steals a tender moment to impart to him these words: “I love you.” His response: “I know.” While this kind of callous confidence might cause some to swoon, it’s honestly the last thing we’d want to here from someone we weren’t sure we’d ever see again. Considering he didn’t know if he’d survive the carbonite freezing process, it’s kind of a big risk to take for a mediocre payoff.

[dx_custom_adunit desktop_id="RTK_K67O" mobile_id="RTK_5yk0"] Leia refers to Han as a “scruffy looking nerve-hurter” in Empire. We’re not exactly sure what that is, but Han’s immediate reaction is to ask, “Who’s scruffy looking?” He admits then that he’s a nerve-hurter, which suggests he enjoys getting on people’s nerves. Ugh. Some people can be so annoying.

Time and again, Han Solo demonstrates that he doesn’t have time for patience. He loves nothing more than to charge headlong into a gaggle of stormtroopers, or hastily end a telecomm conversation with a swift blaster to the speaker. While his rashness can sometimes serve in the group’s favor by capitalizing on the element of surprise, more often than not it takes them out of the frying pan and deposits them directly into the fire.

As a rogue and a scoundrel, you’d think Han would be pretty decent at bluffing. But when Luke tries to free Princess Leia from the Death Star detention level, Han has to do some quick conversing with an Imperial officer via the commlink, but it goes off the rails faster than Luke can bullseye a womprat. How did someone this bad at lying get such a good reputation as a criminal? Some mysteries will never be answered.

[dx_custom_adunit desktop_id="RTK_K67O" mobile_id="RTK_5yk0"] At the end of A New Hope, Luke is gunning his X-Wing towards his target with Darth Vader and his custom TIE in hot pursuit. Luke is dead-set on shooting his proton torpedoes, blowing up the Death Star, but can’t get off a clear shot. Out of nowhere, Han Solo and the Falcon show up, blasting Darth and sending him spinning, clearing the way for Luke to take the final shot. Maybe if Han had shown up a few minutes earlier, the rest of the Red team wouldn’t have all lost their lives, but I guess showing up to a battle late is better than never.

Raised Ren Bad And Got Murdered

The new film The Force Awakens was a divisive one, loved by some and despised by others. And Kylo Ren, the film’s main bad guy who also happens to be Han and Leia’s son, was a big part of the controversy. Ren has gone from being a Jedi trainee to a Dark Side devotee, and shuns his dad’s values and beliefs. You could argue that Han’s lackluster parenting style at least partly informed Ren’s descent into darkness, which culminates when the boy murders his own father in cold blood. That one’s definitely on Han, who let himself get drawn in by Ren’s false promises. Not exactly Father of the Year.

Han’s best friend, apart from Lando, is Chewbacca the Wookiee. Chewie is basically a giant dog, or a “walking carpet” as Leia once calls him. Notably, the creature speaks only in bearlike growls, though Han seems able to understand him, and Chewie appears able to understand human speech. But it’s still worth noting that Han chooses to spend his time in the company of animal-men with limited communication faculties. Kind of an anti-social move, if you ask us.

[dx_custom_adunit desktop_id="RTK_K67O" mobile_id="RTK_5yk0"] The Imperial army uses blasters and other high-tech weaponry to decimate their foes. But when they set up a base on one of the moons of Endor, Han Solo thinks it’s a swell idea to combat the stormtroopers with the fuzzy, pint-size native bear-like creatures, the cuddly Ewoks. And sure enough, it turns out a few well-placed rocks are all it takes to trip up an mechanized walker. A couple of logs can easily decapitate your standard AT-AT. Yeah, right. This idea should never have worked.

Kills Tauntaun Then Insults It

After Han finds Luke face-down in the snow on Hoth, he isn’t sure what he should do. The snow is really coming down, and then all of a sudden his mount, a kind of snow kangaroo called a Tauntaun, just ups and dies. Han then takes Luke’s lightsaber, cuts open the animal’s stomach, and puts the freezing Luke amongst the creature’s steaming innards. The noble Tauntaun having sacrificed himself to save Luke, Han takes a moment to insult to poor beast, saying, “I thought they smelled bad on the outside!” like the jerk that he is.

As previously mentioned, Han saves Luke’s life on Hoth in the freezing snow. But did we mention that the reason Luke gets stranded out there in the first place is because of Han? They’re supposed to be scouting buddies, but Han heads back early, which is when Luke gets attacked by the Wampa. Always honor the buddy system, Han!

[dx_custom_adunit desktop_id="RTK_K67O" mobile_id="RTK_5yk0"] C-3PO is proper to a fault, being a protocol droid and all, and therefore makes few friends. When he plays a game of space-chess with Chewbacca aboard the Millenium Falcon, Han advises the droid to “let the Wookiee win” so that Chewie doesn’t rip 3PO’s arms off. 3PO might be annoying, but Han’s lack of respect for the gentleman’s game of space-chess is simply beyond the pale. Too much!

At the very end of A New Hope, there’s a big ceremony where Leia hands out medals. Luke gets one, and Han gets one, and Chewie is standing right there, but…doesn’t get one? Han makes little attempt to honor his co-pilot either, instead feeling free to bask in his own momentary limelight. Meanwhile, Chewie roars away unrecognized.

Han’s got some pretty questionable taste when it comes to his friend group. Apart from Chewie, who’s more of a pet than a companion, Han’s best friend is Lando Calrissian. Unfortunately, when the company lands at Cloud City, Lando almost immediately betrays them, turning them over to Darth Vader and Boba Fett. With friends like these, who needs enemies?

[dx_custom_adunit desktop_id="RTK_K67O" mobile_id="RTK_5yk0"] Han meets the green alien Greedo in the Mos Eisley cantina. Greedo hopes to collect a bounty that’s been placed on Han’s head for a past smuggling job that didn’t turn out as planned. Han has no intention of being taken, however, and manages to unhook his blaster without Greedo realizing. In the original cut of the film, Han shoots first, frying the green feller. It’s a pretty rude move, even given the circumstances.

In the Special Edition cut of the film, the scene has been altered so that Greedo is the one who shoots first instead of Han. The fan backlash to this was fierce. They claimed their beloved rogue Han had lost his edge. In a moment, he’d gone from an unapologetic preemptive stiker to a lazy sack of reactivity.