Most Traumatizing Death Scenes in ‘Game of Thrones’ 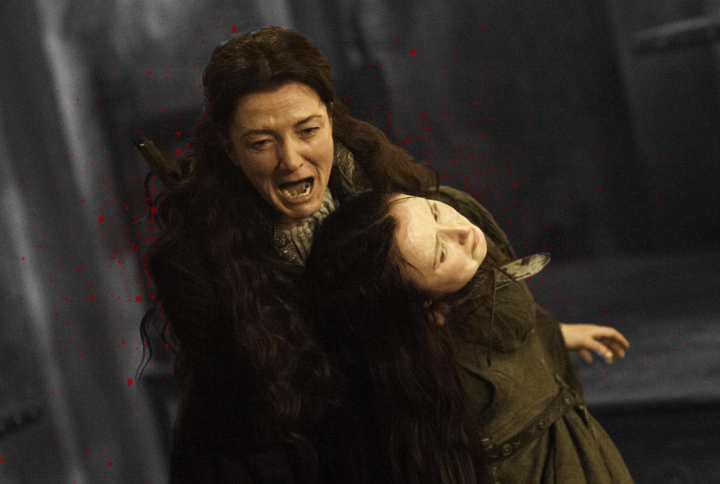 This list is DARK AND FULL OF SPOILERS!!!! Death is pretty common on Game of Thrones but let's relive some of the most shocking and traumatic deaths we have seen so far.

Just days after Joffrey named himself the “rightful king”, he called for Eddard’s immediate execution. His beheading ranks as one of the saddest moments in GoT, and one that launches a chain of events throughout Westeros.

Known as the Red Viper of Dorne, Oberyn was beloved by audiences the moment he stepped onto screen. Sadly, his reign was short lived as he met his fate after his skull was crushed by the Mountain, the same man who raped his sister and killed her children.

HOLD THE DOOR! One of the most heart-breaking deaths is that of Hodor as he dies saving Bran and Meera from the undead horde far beyond The Wall. We still aren't over this one.

Not that we were sad to see him go, but seeing anyone having their face ripped off my a dog is still pretty unsettling. And for that alone, it makes the list.

We aren't sure why Leaf had to die when she could have just thrown the magic light grenade into the oncoming horde, but she didn't. She lay there getting repeatedly stabbed by zombies and doesn't even scream or anything, it was quite unsettling. The cold look in her lifeless eyes are haunting.

The GoT death that audiences flat-out refused to accept. Understandable, as no one was prepared to see Jon’s Night’s Watch brothers betray and stab him to death.

Loyal to House Stark to the end. His execution was tough to watch as Theon hacked and hacked to separate his head from his body. The honorable Sir Rodrik deserved a cleaner death.

One of the hardest deaths to watch in the series is that of Shireen Baratheon. Stannis and his horrible wife, Selyse, allow Melisandre to sacrifice their daughter to her red god. The screams of the poor princess as she is burnt alive are enough to keep anyone up at night.

The first direwolf to die, and unfortunately not the last. Lady, you deserved better. We still aren't over this. #RIP

We're traumatized anytime a direwolf dies. IT'S SO SAD! LEAVE THE WOLVES ALONE! Summer should have run with Bran and Meera!

Yes, Meryn Trant was a completely deplorable human, but seeing a man having his eyes stabbed out and then his throat slowly slit is pretty tough to watch. Even though he totally deserved it, the sicko.

The Red Wedding was rife with shocking deaths, but watching an expecting mother being stabbed repeatedly in her pregnant belly is horrific to see. The show didn't shy away from the brutality of the moment either. We are all still traumatized from this one.

After Ned lost his head, everyone thought that Robb was the hero we had been waiting for. But no! That was not the case and we saw the King in the North take a few bolts and knife in the back. And this was on top of the rest of the carnage from the Red Wedding. Why 'Game of Thrones'? Why do you do this to us?

The Red Wedding will forever remain GoT’s crowning achievement of traumatizing its audiences. It’s been years, but we’ll never get over all of that bloodshed that culminates in Catelyn's screams finally being silenced when her throat is slit.

The death that everyone wanted but thought would never come. The moment Joffrey began choking on his poisoned wine, then turned purple before dying in his mother's arms will stand as one of the most satisfying GoT moments ever.

Something about someone spitting up blood as there are massacred by small children with knives is bone-chillingly traumatic. Couple that with the hauntingly beautiful music from the soundtrack and it's not a scene you'll soon forget.

Drogo’s death is probably the most dramatic and anticlimactic of the series. But seeing him go from a fierce, undefeated warrior to a vegetable was one of the hardest to watch unfold.

Why no one thought to give the giant a shield is beyond us. But seeing him kneeling down looking like a pin cushion was tough to see. It was even worse seeing that last arrow go straight through his eye.

>Some people forget how much of whiney brat Daernerys’ brother really was. Viserys’ ironic death -- being “crowned” by molten gold as he screams for his life -- was as much as a relief for viewers as it was visually gruesome.

Little Rickon was so close to being safe. So. Close! It's always tough to see another Stark die. Serpentine, Rickon, serpentine.

Renly was one of the few genuinely noble and kind characters in the GoT series, so it was especially sad to see him go. His death was one of the most WTF moments of the first season, being that he was assassinated by a shadow creature summoned by the Red Lady.

After seeing his wife and his faith go up in a huge green fireball along with the entire Sept of Baelor, young Tommen was all alone and not quite sure how to cope. So he set down his crown and wordlessly jumped out of this window.

This fiery wildling was the only GoT character who could make Jon Snow break his sacred vow. Which makes it even more heart-wrenching that Ygritte died in Jon's arms after Olly shot her with an arrow.

The Men Who Killed Jon Snow

After Jon Snow was resurrected by the Red Lady, he sought revenge. Something in Jon’s eyes change as he hangs his own murderers: Alliser Thorne, Bowen Marsh, Othell Yarwyck, and Olly.