Jen Arbues
The Best Ideas From “Star Wars” Fanfiction They Should Actually Use In The Movies April 20, 2018 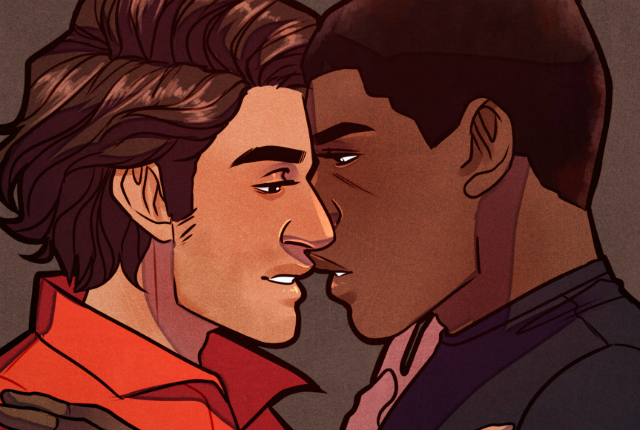 What are the best Star Wars fanfiction stories?

Star Wars as a franchise has inspired millions of nerds worldwide to imagine a life beyond our universe. It's one in which space princesses lead rebellions, bounty hunters with jetpacks chase wisecracking smugglers, and everything depends on the balance of an invisible force. The lore surrounding Star Wars goes much deeper than what we know of the Skywalker clan. There are tons of stories from the Star Wars Legends works that don't exist on screens. And there are even more that have only made an appearance in the darkest fan-run corners of the internet. In fact, some of the best Star Wars stories out there are Star Wars fanfiction. Because, sometimes, fans have better imaginations than Disney. Or George Lucas.

Echoes of an Empire

The one where the First Order has retreated back into the shadows of the Unknown Regions after the destruction of Starkiller Base, Rey begins her training, and Leia deals with the aftermath.

Echoes of An Empire is an alternate sequel to The Force Awakens, because — at the time — it was taking too damn long to get a legit sequel in theaters. It brings in elements from the EU, too, which is pretty rad.

The one where Vader discovers Leia is his daughter when she is ten years old and takes her to train her, take revenge on Sidious and rule the galaxy.

It’s the goddam Dark. Leia. Story. Not enough focus has ever been given to Leia, especially considering she’s just as Force sensitive as her brother. Given the right training, we find out just how powerful she can be, and it is everything.

In the Empire’s Shadow

The one where Vader searches the galaxy for answers about his family.

We lost some really great characters when Disney bought the rights to the Star Wars legacy. One of the more notable losses was that of Mara Jade, a former Emperor’s Hand-turned Jedi Master who married Luke Skywalker. In The Empire’s Shadow gives her the recognition she’s been long overdue for, and we’re all about it.

The one where Leia comes to terms with Anakin’s force ghost.

On the opposite end of the spectrum though, you’ve got Reflection, a story about the truth behind Padme’s death, Anakin’s steps to preserve his humanity, and Leia’s struggle to remain on the light side. For fanfic, there’s a ton of nuance and emotion, and again — all the Leia.

Hindsight Is Not Perfect

The one where Anakin is sent back in time to before the events of The Phantom Menace.

If you’re going to delve into the world of fanfic, may as well go all out with it. Hindsight Is Not Perfect deals in time travel. Because, honestly, why the f— not redo Episode I?

The one where Luke didn’t make it off the Death Star after Kenobi's death.

Consequences is a really well-written piece of fanfic that delves further into the relationship between Luke and Vader. Boba Fett is heavily featured as well, and if you know anything of the Mandalorians, it’s that we need more of them in our Star Wars stories.

The one that follows Drew Karshypyn's Darth Bane Trilogy.

The Grey War focuses on Darth Cognus and her second apprentice, Namon. It’s a great story that explores the “Rule of Two” in Sith lore, which is fascinating Star Wars history that you probably wouldn’t know about, unless you also happen to know a lot about franchise’s EU.

Revenge of the Jedi

The one where Vader plots against the Emperor, Leia gets drawn into the plight of the surviving Alderaanians, Han hangs on Jabba's wall, and Luke leaves the squadron to be a full-time Jedi.

This is a sort of re-imagining of Return of the Jedi (only using the film’s original title!), and it’s actually based on some of the original plans. It’s not a what-if, per se, but it’s worth the read to get a different angle on the story.

The one where a Sith Lord hunts after an ancient beast.

This one is set a thousand years after Return of the Jedi and introduces us to an entirely new character in the Star Wars universe. But, most importantly, it goes into what happened to Ahsoka Tano after season 2 of Star Wars: Rebels, and we’re down for anything related to Ahsoka, regardless of actual writing skill (which is just sort of okay here, but bonus points for originality!).

Fall of the Sith

The one where Mace Windu changes the outcome of the entire Star Wars saga.

So in the actual SW saga, it’s Mace Windu’s death that tips Anakin over to the dark side. In this reimagining, however, he makes a decision to preserve Anakin’s light side. A pretty dumb decision, if you ask us, but an entertaining one, nonetheless.

By the Grace of Lady Vader

The one where Padme Amidala stands by her husband's side, and no power in the galaxy can stand against them.

Imagine if Padme had actually gone along with Anakin in his quest for ultimate power. This AU story portrays her in a completely new light (and actually makes her character pretty palatable for the first time ever).

After the Last War Is Won

The one where Luke starts rebuilding the Jedi Temple on Coruscant.

In the Skywalker film series, there’s kind of a huge jump of time between Episodes VI and VII, which left a lot of fans wondering what the f— actually happened with Luke. This one kind of answers that and is written well enough to keep you from getting caught up in it being fan-made.

The one where Anakin Solo survived Myrkr.

Another casualty of the Disney buyout, Anakin Solo is one of those really amazing characters that we have a 99% chance of never seeing on screen. But if you’re into the Legends stories (and we most definitely are), this is probably the best fanfic available on the internet, and an absolute must read.

The one where Anakin is Emperor and has captured Obi-Wan.

This AU story sees Anakin pretty much get everything he’d been after by the end of the prequel trilogy, which goes about as well as you’d expect it to. But the best part about it is that it’s written from Obi-Wan’s perspective, and any good Star Wars fan knows it’s about goddam time we got an Obi-Wan narrative.

The one where when Anakin doesn’t find Ventress and Ahsoka is found guilty and sentenced to death.

The Clone Wars is an animated Star Wars series that takes some getting used to as far as its actual aesthetic, but completely delivers on fixing the mess of a backstory that the prequel trilogy gave us. Fallen Legends is a sort of AU story that gives us a “what if” look at one of the better storylines of the series.

The one where a newly-appointed Jedi Master has a vision of the Galaxy's end two years after engaging the Lost Tribe of Sith.

This is the one to read if you’re really into canon. Its author has researched nearly every detail, so even though it’s a completely original story, it feels like it fits in with everything we’ve seen so far.

The one where Padme survives and has spent the last five years in hiding with her twins.

Is it a Vader redemption story? An Anakin/Padme love story? An Obi-Wan bash fest? It’s actually all three, and even if you happen to have a major hard-on for Obi-Wan, the writer’s storytelling ability will make you question the guy’s true motives.

The one where Vader turned double agent for the Rebellion.

Run a quick Google search of best Star Wars fanfic, and this one winds up on pretty much every list. There’s a reason for it, too. Imagine Vader — the Chosen One — actually embracing the light side of the Force while there’s still time to do something with it. It’s a really cool AU story that really shows how layered Vader is as a character.

The one where Anakin dies, and Obi-Wan is left to pick up the pieces.

It’s also the one where Darth Sidious sets his sights on Obi-Wan as a replacement for Skywalker. Imagine, Obi-Wan Kenobi as a Sith Lord… yes, friends, this is Dark Side Obi-Wan, and anytime a dark version AU story comes around, you know we’re going to be all about it.

What If The Prequels Were Good?

The trilogy in which the prequel trilogy was written well.

Michael Barryte gives Star Wars fans the prequel trilogy we all f—ing deserved back in 1999. His review/reimagining of the series on completely on point, and goddammit, he’s got some great production value going for him, too.