Matthew Loffhagen
Things Only Adults Notice in “SpongeBob SquarePants” May 12, 2020Leave a comment 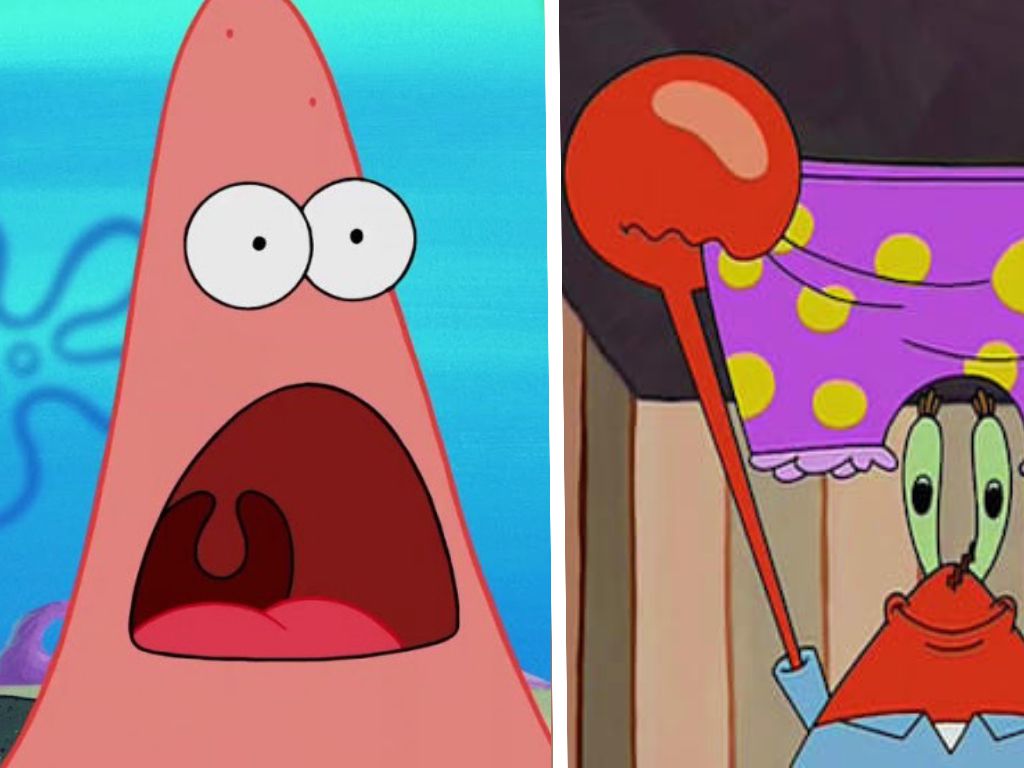 "Spongebob SquarePants" is a long-lasting favorite cartoon which is beloved by children and adults alike. Of course, kids don't necessarily pick up on all the humor, and only adults can truly appreciate some of the show's most devilish jokes.

Kids don't think too hard about cartoon physics. Grown-ups, though, notice when, for example, things catch fire at the bottom of the sea. In one episode, Patrick does the unthinkable, and questions why his campfire is burning underwater. The fire immediately goes out, and adults chortle at the show poking fun at itself.

In an episode where SpongeBob picks up some naughty language, he repeatedly swears out loud. This is covered up by the noise of dolphin speech, but while kids are none the wiser, grown-ups can take a guess at what's being said.

In an episode where SpongeBob breaks his butt (already things are getting weird), he becomes paranoid about leaving the house. This is perhaps not a great episode for adults to watch while in lockdown, at it plays on all of our grown-up fears about the dangers of the outside world.

In one episode of the show, while playing pirates with his pet snail Gary, SpongeBob uses two bars of soap as "doubloons." He warns Gary not to drop them, which makes sense to kids because they're valuable. Parents, on the other hand, spot a prison shower reference that probably doesn't belong in a kid's show.

The name of SpongeBob's home town, Bikini Bottom, is something that kids won't think twice about. Adults, though, recognize that this is a reference to the lower half of a woman's bathing suit. But that's not all it references...

Super adults (also known as historians) might recognize Bikini Bottom as a reference to Bikini Atoll, a real world place that the US army once nuked to test their atomic weapons. Alas, the area surrounding Bikini Atoll was inhabited by Pacific Islanders, who had to be forcibly relocated and were never allowed to return home. "SpongeBob SquarePants" takes place in an irradiated No Man's Land at the bottom of the sea near a nuclear test site.

Yet again steering away from heavy subject matter, here's a picture of Squidward sticking a leaf blower up his shirt. Sure looks suggestive, doesn't it?

Not every joke needs to be complex. SpongeBob's squirrel friend, Sandy Cheeks, has a dumb joke right in her name that kids won't notice at all. After all, squirrels love stuffing things in the cheeks, so this name makes sense, right?

In the episode where SpongeBob makes a "Balloon Squidward," it's possible to see, just for a second, that whatever SpongeBob is blowing up, it's probably not actually a balloon.

One early episode shows SpongeBob watching a sea anemone on television, before hurriedly changing the channel when Gary enters the room. Adults have a sneaking suspicion that SpongeBob was watching something inappropriate.

"Your Genius is Showing"

When told by SpongeBob that his "genius" is showing, Patrick hurriedly reaches to cover the front of his bathing suit. Presumably he misheard a "g" as a "p" and feared the worst.

In one particularly grown-up episode of the show, Mr. Krabs embarks on a panty raid by stealing his mother's underwear. Kids probably aren't all that familiar with what a panty raid is supposed to be, but grown-ups get it.

See You Next Tuesday

Following a particularly unsuccessful boating lesson, SpongeBob says, "See you next Tuesday!" to his teacher, Mrs Puff. Kids think nothing of this, but adults notice that this phrase is often used as a euphemism for a particularly dirty word.

One time, SpongeBob buried himself in the sand, with just a small yellow appendage sticking out. Mr Krabs remarks that he really hopes this is SpongeBob's nose. Adults can think of something else it might be.

The best For Adults joke of all time isn't even dirty. In the SpongeBob feature film, the heroes are rescued by none other than David Hasselhoff. Children won't have a clue what's going on, but anyone familiar with "Baywatch" knows that this movie's ending is just perfection.

So a joke where SpongeBob gets sat on is already going somewhere dirty. In an effort to get him free, Plankton tells SpongeBob to "Be assertive!" SpongeBob misunderstands, and sticks his finger into the fish's pocket. SpongeBob is being "insertive," and adults everywhere get a joke that flies over kids' heads.

Sorry About the Scabies

At one point in the show, SpongeBob and his friends come across a cake that reads, "Sorry about the scabies." Presumably no children think too hard about what this means, as scabies is an infectious disease that only grown-ups have to worry about.

When SpongeBob and Patrick annoy a poor employee of the Medieval Moments restaurant, he briefly considers stabbing himself before muttering, "Someday... but not today." Kids might not get what's going on, but adults recognize a cry for help from a fish who's in serious need of mental health first aid.

When Sandy travels to Karate Island, she comes up against The Tickler, a martial artist who is very clearly a French stereotype. Don't Google "French Tickler" if you don't know what it means already.

This is a picture of SpongeBob with a pair of underpants on his head. His nose is protruding forward through the underpants. 'Nuff said.

Story time: there's a Creepypasta meme telling the story of Squidward attempting suicide, which is meant to be spooky, and which certain sections of the internet love. In one episode of the show, this meme is deliberately referenced, as an image of Squidward's eyes, large and dripping with something black, appear on a screen of static. Kids might be a bit freaked out, but adults get that this joke is just for them.

Whenever SpongeBob and Patrick go to Goofy Goober's and eat too much ice cream, they start acting weird. Kids might think this is a sugar rush, but adults recognize that the "ice cream" acts an awful lot like hard liquor.

One time, to get away from Sandy, SpongeBob claimed he needed to get a haircut. Sandy then points out that SpongeBob doesn't have any hair, before adding, "Or does he?!" There's only one part of SpongeBob's body that's covered with clothing, so adults start to wonder where he might be hiding all this hair.

In one episode of the show, SpongeBob and Patrick take on the role of parents for a young clam. SpongeBob plays "mother," doing all the cooking and cleaning, while Patrick pretends to be the dad— by sitting under a rock and watching TV all day. For some adults, this exploration of gender roles hits a little too close to home.

Here's a nice simple one: kids watching "SpongeBob" may think his many weird faces look funny, but there's an extra layer of meaning to adults who've embraced meme culture, and recognize moments in the show from a million different internet jokes.