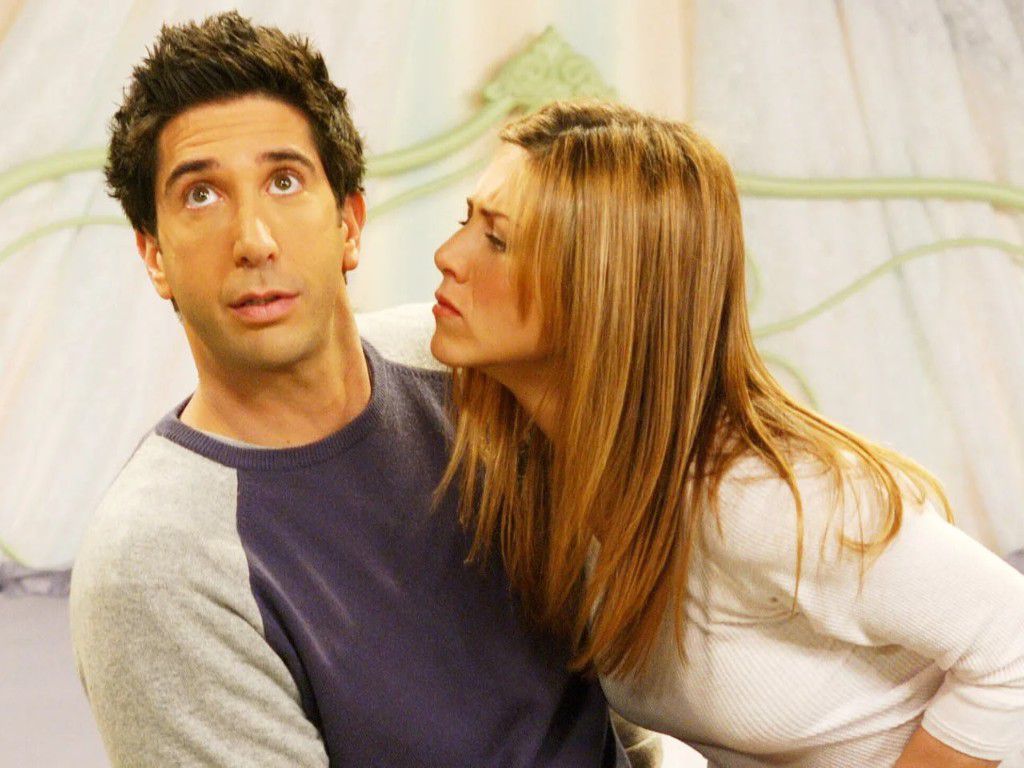 We thrive off of romance. We love watching television shows and movies to see our favorite characters come together. On the surface, these couples appear to be a perfect pair. However, when one looks deeper, they find that the couple's relationship is totally toxic. Maybe Rachel would've been better off with Joey. We may want their relationship to work more than anything else, but in reality, these couples should split.

Carrie and Big, "Sex And The City"

Carrie and Big from "Sex and The City" are the couple we want to work more than anything. Unfortunately, Big dragged her around for years. Then he chose to marry someone else, only to cheat on his wife with Carrie. When he and Carrie finally end up together and decide to get married, he stands her up at the altar. In the end, they did get married, but at what cost?

Midge from "The Marvelous Mrs. Maisel" is quick-witted and should be with someone who can match her intellect. Ben is far from being that person. He has a blasé attitude, and tries to make up for it with jokes that fall flat. On his date with Midge, he takes her to an art show. She never expressed interest in art. He only took her to the show because he wanted to go.

Chuck Bass and Blair Waldorf from "Gossip Girl" have been idolized as a couple, even though Chuck is a repeat sexual offender. He views Blair not as a person, but as a trophy. When going on vacation together, Chuck leaves her behind on the helipad. Any time Blair tries to move past him with a new relationship, Chuck sabotages them.

Tony and Carmela Soprano, "The Sopranos"

Carmela and Tony from "The Sopranos," have a marriage that is full of infidelity, anger and jealousy. Their biggest problem, however, is their lack of communication. Talking to each other usually ends in a screaming match. Eventually, their marriage ends in divorce. However, they do hook up a few times after their separation.

Luke and Lorelai from "Gilmore Girls" are so ill-fitted that they should have stayed apart. They both are stubborn and refuse to admit fault to anything in their lives. Luke keeps secrets from Lorelai. Then he gets enraged when she gets upset about finding out the truth. And Lorelai oversteps her boundaries by telling him how to treat Jess after Rory gets injured.

This fan-favorite relationship on "Pretty Little Liars" was pretty disturbing. Ezra purposefully chose Aria. He wanted to be close to her and gather information to write a book about her friend's murder. He even continued his relationship with Aria, knowing that he was her high school English teacher.

Zack and Kelly, "Saved By The Bell"

Zack Morris and Kelly Kapowski were the on-and-off couple on "Saved By The Bell." In one episode, Zack goes to his girlfriend's birthday party while having Screech pretend to be him to go on a date with another girl. He's also a compulsive liar. He doesn't mind helping other girls out, as long as he gets something in return. Kelly can do so much better.

Honestly worse than "Twilight," the Buffy and Angel relationship was sadistic and twisted. Buffy fell in love with Angel, and after sleeping with him on her 17th birthday, he returned to Angelus. He killed people to punish her for causing him to feel this way, taunted her and her friends. Not to mention that he also pulled the card of watching her in her sleep.

Ted and Robin, "How I Met Your Mother"

Ted and Robin from "How I Met Your Mother" had a rocky relationship from the start. Robin would point out flaws she found in his personality. She is also conflicted about how she feels about Ted. This makes sense, since he forces Robin to get rid of her dogs because he feels uneasy being around reminders of her ex-boyfriends. He also cheats on Victoria with Robin.

Bella and Edward from "Twilight" were the couple who defined the late 2000's. This relationship was wild. Remember when Edward would sneak into Bella's room and watch her sleep? Or when Edward left, and Bella was so devastated that she couldn't function as a human being? Or that Bella tried to kill herself as a way to see Edward again?

Bender and Claire, "The Breakfast Club"

The couple that can only exist in our dreams: the bad boy and the popular girl. Bender and Claire from "The Breakfast Club" develop feelings for each other after spending a Saturday at school together. But their feelings were built upon lies, mental games, and unwanted sexual advances. They ultimately decide to get together as a way to get back at Claire's parents.

Jackie and Kelso from "That 70's Show" are almost too similar to one another, which is why they cannot work as a couple. They are both insanely vain. Jackie is bossy and demands to be in control of their relationship. She talks down to Kelso, making him feel stupid. But there's also the fact that Kelso cheats on Jackie more times than we can keep track.

Ian and Mickey are toxic for each other due to Mickey's inability to fully come out of the closet. Mickey comes from a very aggressive family that looks down on homosexuality. In the earlier seasons of "Shameless," he would bully Ian for being gay, yelling homosexual slurs. Then an hour later, he would secretly meet up with Ian so they could make out.

"500 Days of Summer" is yet another romantic comedy, where the main characters are being forced together. From the beginning, Summer makes it clear to Tom that she doesn't want a relationship. Yet Tom goes out of his way to force it to happen. He's constantly reading more into her actions than listening to what she says.

"The Big Bang Theory" made it seem like a nerd and the girl-next-door, could live happily ever after. In reality, Leonard constantly talked down to Penny. He treated her as if she was stupid, poking fun at her lack of knowledge. He didn't support her career choices. On the flip side, Penny constantly belittled Leonard for his knowledge of nerd culture.

Count Olaf and Esmé, "A Series of Unfortunate Events"

Count Olaf and Esme Squalor from "A Series of Unfortunate Events" was a power couple. However, their inability to work together caused the downfall of their relationship. They couldn't work well together. They would make snide remarks about each other. There was a lack of trust and loyalty in the relationship.

The couple of the 90's were Ross and Rachel from "Friends." They were together and on a break or not on a break. Their relationship had a lot of trust issues. Ross was worried about Rachel hooking up with a coworker. Ross married someone else, even though he was in love with Rachel. And Rachel always strung Ross along, never being upfront on how she felt.

Allie and Noah, "The Notebook"

"The Notebook" is known as a romance movie. However, the relationship between Allie and Noah is abusive and obsessive. Noah threatens to harm himself if Allie does not go out on a date with him. The two fight verbally, and at one point, physically. He even goes out of his way to buy a home for Allie, after they break up, to turn it into her dream house.

The most memorable couple in all the seasons of "American Horror Story." Violet and Tate appeared to be a perfect pair. Well, if you decide to look past Tate making the conscious decision to rape Violet's mom and impregnate her with the child of the Devil. Oh, and there's the fact that he doesn't tell Violet she's dead.

Probably one of the more iconic toxic couples. But the amount of times this couple is romanticized is disturbing. It starts with Harley as a psychologist at Arkham Asylum where she attempts to help the Joker. However, he mentally manipulates her. Preying on her empathy towards him, he uses this power to control her throughout their relationship.

A raging alcoholic and drug addict meets a strong, quick-tempered, independent woman. Lana and Archer, from the animated series "Archer," are a comedic pair. But the amount of infidelity and lack of trust creates a lot of turmoil. Not to mention Archer's unhealthy relationship with his mother, who makes snide comments about Lana, which doesn't help.

Joan and Roger's relationship on "Mad Men" was an affair. It involved a lot of sneaking around and hotel rooms. Roger knew that Joan was a smart, powerful woman, but felt that she could amount to nothing more than a housewife. Though he hinted at divorcing his wife, he ultimately broke it off with Joan. Only to leave both women behind for someone younger.

Hoyt and Jessica were the cutest couple on "True Blood." However, when Hoyt's mom was around, she would make rude comments about Jessica. It took Hoyt months to stand up to his mom and defend his girlfriend. When Hoyt and Jessica's relationship came to a standstill, she glamoured him and removed all his memories of their time together.

Rizzo and Kenickie are the couple from "Grease" with the most toxic relationship. When Rizzo realizes she might be pregnant, she tells Kenickie it's not his child. Before the school prom, they both get into a fight. So Kenickie purposefully goes with Cha-Cha because he knows it'll upset Rizzo while Rizzo goes with Leo because it'll upset Kenickie.

Daenerys and Khal Drogo's relationship on "Game of Thrones" was a business deal. Drogo bought Daenerys in exchange for giving away 10,000 soldiers. Not the best foundation for a relationship. He repeatedly rapes her and sexually assaults her, though Dany develops feelings for him. It's a relationship that seems to be the definition of Stockholm Syndrome.