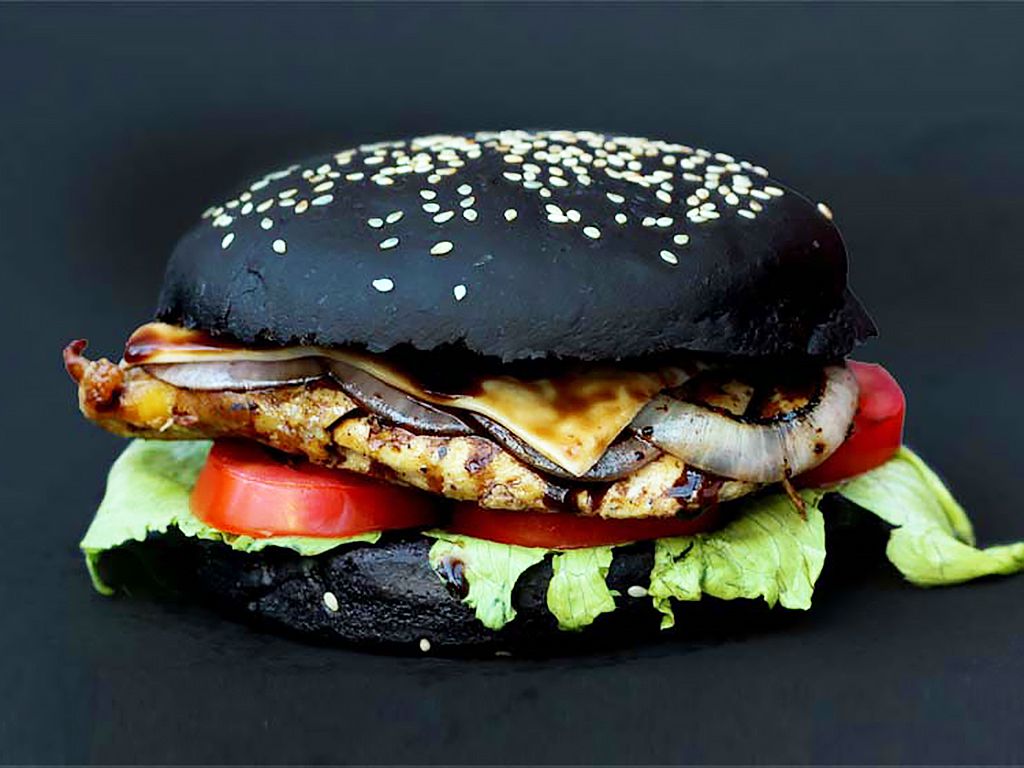 It’s a well-known fact that Americans are major fans of junk food. But they're not alone. People from all over the world seem to be hooked on processed food, too. And the tastes of other cultures mixed with the accessibility of fast food has concocted some seriously weird, and sometimes colorful, food!

In America, fast food customers are used to burgers, fries, salads and protein bowls, but those items aren't so common in other countries. So if you happen to be traveling abroad, you might be able to find the strangest fast food items from Starbucks and McDonald’s.

Be careful when using the word loaded when you order at a McDonald’s in Singapore. Otherwise, you might get a box of fries full of salted egg yolk sauce. Don’t worry! It’s cooked. In fact, the locals use this type of sauce as a cheese substitute.

We all know what Kit Kat bars are supposed to taste like. But Japan has put a new twist to the traditional candy by releasing a sea salt lemon variety made with Japanese Setouchi lemons and salt from the Seto Inland Sea in Japan.

Taro is a root veggie that is as common in Asian desserts as apples are in American pies. So naturally, the McDonald’s restaurants in Asia offer sweet taro pies that look similar in appearance to the apple pie variants seen in the US.

Spicy fish egg flavored Pringles? You might be thinking 'no thanks!' But, don't act so fast. It might not be on the top of most American’s shopping lists, but the people of Japan are head over heels in love with this fishy flavor. It’s become a big hit in Singapore, too.

Nutella originated in Italy, so there was no way that they were going to pass up the chance at McDonald’s Italy locations to add this spread to their burgers. But relax! There’s no actually meat in these burgers, just lots of Nutella. If you're looking to order this item in the future, it's called a Sweety.

Leave it to the Aussies to do something extraordinary with their pizzas, and they have! Pizza Hut Australia offers the Cheeseburger Crust Pizza, and as the name implies, there are burger patties on the petal crusts of the pizza. This pizza is now also available in Dubai.

Since a lot of people in India prefer vegetarian options as opposed to cow meat, the McCurry is the ultimate solution for India’s McDonald’s. But what is it exactly? It’ a rectangular pie shell filled with curry sauce and vegetables.

Visit a Burger King in Israel and order the Sufgani King, which is no ordinary burger. Instead of a traditional bun, Burger King uses a donut filled with ketchup as a bun. But generally, the Sufganiyot donut is a Hanukah treat that is basically similar to a jelly-filled donut.

Can anyone imagine a part of the world where people would opt for cheese over French fries? Well, in Italy, customers visiting McDonald’s can ask to substitute an order of fries for a bar of Parmigiano Reggiano cheese.

At Pizza Hut restaurants in Hong Kong, customers can order a pizza with the crust stuffed full of salmon, flying fish roe and cream cheese. While it might not sound tasty to westerners, keep in mind that fish food items are much more common in the east.

The McDonald’s in Spain may offer McFlurries and shakes just like their international counterparts, but they also offer one thing that is rare for McD's— macarons! These cookies are often filled with something in the middle like chocolate ganache or other fun flavors.

Want a side of pumpkin spice fries? Then come to McDonald’s in Japan and order the Halloween Choco Potato fries. They’re regular fries with chocolate and pumpkin spice sauce spread on top that becomes available in September and lasts all the way through the ghoulish holiday in October.

Who needs hot dog buns when you can use chicken instead? That’s what Kentucky Fried Chicken's locations in the Philippines thought. So, they subbed hot dog buns with fried chicken for their hot dogs. Now that’s crafty!

Pizza Hut locations in New Zealand offer their very unique Marmite Stuffed Pizza Crusts. But what is Marmite? It’s the stuff they scrape off from beer barrels after beer gets brewed. It’s not nasty, but it is salty and thick. So, anyone with high blood pressure should steer clear of this menu item.

Anyone expecting a piece of chicken inside one of these nuggets is in for a rude awakening at Italian McDonald’s restaurants. That’s because they’re actually fried spinach and parmesan nuggets. But while they might be unconventional, they’re still delicious.

Charcoal might not sound appetizing, but in Japan, Burger King integrates it into their beef patties and cheese. But that’s not all! Squid ink is also added to the burger to give the buns their signature black color. And while some Americans might be put off by this burger’s appearance, there’s no harm in trying it just once.

Asian customers ordering the popular soft serve treats from McDonald’s have the option of ordering a purple-colored sweet potato variation. Who knew that sweet potato could make such a cool treat? But people shouldn’t be surprised given the root vegetable’s sweet taste.

When Domino’s Pizza was introduced in India, they had to consider the region’s local flavors. To that end, the Indi Tandoori Paneer pizza was born. It consists of roti, a type of flat bread, and paneer, which is a type of cheese. The pizza gets cooked in an oven called tandoor which adds a smoked flavor to each pie.

Anyone traveling through China should consider grabbing themselves some Oreo Cookies. But these aren’t like the ones in the States. They actually come in hot wing and wasabi flavors and reportedly taste just as spicy as the real thing.

After doing some extensive marketing research, McDonald’s discovered that the people of Japan were more partial to rice than bread. So, they created a rice bun caramelized in soy sauce and they introduced it as their Gohan burger.

Burger King in Japan offers a 22-inch burger that’s essentially the size of a pizza. And it’s not exactly diet friendly given that it has more than 2,500 calories and is high in salt and fat. But you only live once and as long as you don’t make it a regular thing, it’s probably okay.

In the 1970s, McDonald’s decided to add an Italian touch to their menu in America with the McSpaghetti. Essentially, it’s spaghetti with red sauce and shredded cheese on top. But it wasn’t very popular in the U.S. However, the people in the Philippines loved it when the franchise introduced it there.

These candy-coated sweet treats were sold as a breakfast item in the United States in 2015, and they’re very missed by many customers with a sweet tooth. The Delights were fried pastries that were coated in the Crunch Berries cereal and filled with a sweet milk icing.

This might seem like a luxurious fast food item to many customers, but fast food lovers in 2016 were able to buy this in areas of the Northeast of the United States at participating McDonald’s locations for $8.99. The item was available in the states of Maine, New Hampshire and Vermont.

Heat lovers may know that the ghost pepper is one of the hottest peppers in the world. It is so hot that even handling it can be dangerous. So, it was a surprise when Wendy’s unveiled this cheesy menu item in the U.S. in 2016. The fries were loaded with cheese and diced jalapeños before being covered in a hot ghost pepper sauce.

Taco Bell is no stranger to sweet items, and this candy inspired dessert was released in Australia and Sri Lanka before being introduced in the U.S. in 2017. It consists of two tortillas filled with chocolate sauce and Kit Kat pieces.

The Angriest Whopper is certainly an eye-catching burger! The buns were baked with a hot sauce mix which gives them their red color, and the burger itself was topped with jalapeños and spicy sauces, making this a burger for only people who can handle the heat. It was released in the United States in 2016.

Fried Oreos and other fried candy offerings have long been available at carnivals and county fairs, but in 2012, Pizza Hut locations in the Middle East offered fried Kit Kats to their customers. The candy was wrapped and baked in “sweet pizza dough” and served with icing.

For people who are unfamiliar with the Canadian staple, Poutine is traditionally made of cheese curds and gravy on top of classic French fries. The savory snack is available in most Burger King locations in Canada, where Poutine is king among all other French fry options.

McDonald’s locations in Japan offer this unique fried chicken menu item. A chicken patty is wrapped up similar to an American hash brown and served with a packet of seasoning, which is available in lemon, pepper and cheese flavors. Customers can then pour the seasoning on the chicken, shake it up and savor its deliciousness.

In South Korea, customers can order this sweet fair food along with their burgers and fries. This traditional dessert originated in Spain and Portugal, but no one can deny the sweet goodness of the fried pasty snack that’s covered in fine sugar and dipped in chocolate sauce.

Matcha is a powdered green tea that is typically mixed into drinks and smoothies, and McDonald’s locations in Japan even offer Matcha to be added to McFlurry’s. The mixture of green tea flavor, Oreos and ice cream has been described by some customers as “heavenly.”

Following in the lead of other fish flavored snacks available in Asian counties, this offering from Lay’s really shows that fish flavors aren’t just a passing fad. The grilled eel flavored chips are available for purchase in grocery stores all over Japan.

Pizza Hut loves to be creative with their stuffed crust offerings, so they decided to incorporate the All-American hot dog into their pizzas. Diners in Japan absolutely love the inclusion of these sausages in their pizza, but American audiences were less keen on the addition.

McDonald’s locations in Hong Kong were treated to a new dessert offering in 2017 and it was spicy. Tabasco also lent their product to burgers and fries, but it was definitely the sundae that caught the most attention. Although, some people who tried the dessert said that it just wasn’t spicy enough!

Even though Hershey’s was founded in Pennsylvania, it has grown to be a product recognized and loved world wide. This Japanese offering from the company is a chocolate cereal with white chocolate and matcha flavors, taking sweet breakfast cereals to the next level.

Most people go to donut shops like Tim Hortons or Dunkin’ Donuts for strictly sweet snacks, but in Indonesia, Dunkin’ offers  some spicy flavors, too. They recently introduced Spicy Mango and Spicy Pineapple flavored munchkins for the country who already loves a spicy mango relish called samba.