Listen to These True Crime Podcasts If You Love Murder

Jen Arbues
Listen to These True Crime Podcasts If You Love Murder February 13, 2018 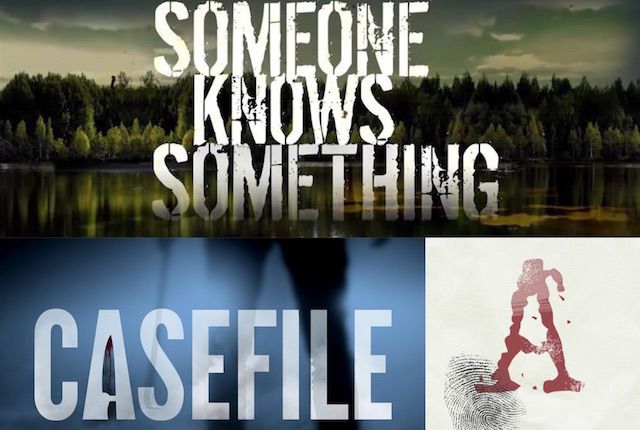 We know who you are. You’re the person who curls up on the couch on a Sunday afternoon to binge “Deadly Women.” And you listened to every episode of “Serial.” And you for sure know exactly what to do (and not to do) to get away with the perfect murder. You probably also have a lot of free time on your hands. So we’ve got the perfect way to fill that time. Because these are the best murder podcasts out there for when you need a little inspiration. Er, we mean entertainment.

Like “Serial,” “Someone Knows Something” takes on a single cold case over the course of an entire season. David Ridgen, an award-winning filmmaker, revisits the people and places involved in the crime. His style is on the investigative journalism end, which means that for those of us who keep Investigation Discovery on 24/7, this is a perfect podcast place to start.

Speaking of Investigation Discovery, though… If you’re really looking to get into that frame of mind, “Detective” is the network’s actual podcast. The first season is narrated by Joe Kenda, of “Homicide Hunter” fame, but each season brings with it a different detective with his own perspective on crime and justice. Bonus: each episode is only about 25 minutes long, so they’re perfect for those with a shorter morning commute (like anyone not in the LA area).

“Real Crime Profile” isn’t just hosted by one true crime expert; it’s hosted by three. Former FBI profiler Jim Clemente, former New Scotland Yard criminal behavior analyst Laura Richards, and “Criminal Minds” casting director Lisa Zambetti spend each episode profiling behavior from real cases. It’s like getting into the mind of a murderer, without ever having to go through the training to do so.

For the cold case fiends, “Accused” tells the story of 23-year-old Elizabeth Andes, who was found murdered in her Ohio apartment in 1978.”Cincinnati Enquirer” reporter Amber Hunt dives into the case and the confession of Beth’s boyfriend at the time. The murder remains unsolved, but the details Andes uncovers will keep you guessing week to week.

Steve, Devin and Joe are skeptics. But that doesn’t mean they aren’t open to discussion about things like murders, suicides that look like murders, and the occasional missing plane. They’re kind of all over the place, but to be quite honest, so are we all.

For those with a shorter attention span, “Criminal” manages to fit a single case into a 20 minute episode. Since you don’t have to worry about keeping track of the same story over a period of weeks, it makes it easier to pick and choose the stuff you want to hear about. Might we recommend the one about 19th century serial killer “Jolly Jane.”

The first season of “Unsolved” looks at the ins and outs of the 1976 murder of 14-year-old John Zera, but don’t be fooled: it’s easy to binge the entire season in an afternoon. With episodes ranging from 13 to 30 minutes, it’s one of the shortest podcasts out there. But take comfort in the achievement of actually finishing something for once in your life.

“The Black Tapes” is a good mix of true crime and paranormal activity, hosted by journalist Alex Reagan. You may question the reality of ghosts and demons along the way, or you may just continue to make fun of the people who do. But don’t say we didn’t warn you when you get that 3 am visit from the angry spirit you let loose through your Ouija board.

If you’re familiar at all with the Black Dahlia case, “Hollywood & Crime” will tell you everything you could ever want to know. It’ll also make you suspicious that a possible serial killer was on the loose in 1940s Southern California. And it might just make you rethink that move in search of stardom.

Mike Boudet launched “Sword and Scale” in 2014, and over the past four years, his podcast has run the gamut of true crime topics. From unsolved murders to high profile trials, “Sword and Scale” has spent over 100 episodes taking its audience on a deep creep dive. It also uses original audio files and eerie music to set the tone, which makes it a great choice for horror fans.

Yes, exactly like that “48 Hours.” This one’s great for those of us who would watch the CBS investigative series 24 hours a day, if we could. So now, even though we’re forced to take a break from watching “48 Hours” (thanks, work), we can spend a little more of that time listening to it (there’s got to be something good about that commute).

“And That’s Why We Drink”

For those looking for something with more of a supernatural bent, “And That’s Why We Drink” explores stories of true crime and the paranormal. Because it isn’t enough to just hear about someone’s death. We want to hear about what happened to them after they died, too.

The hosts are comedians who research murder, so you can bet their stories have a darker sense of humor. They’re also totally f—ed up tales of small towns and the people in them, most of which you’ve probably never heard of. Each episode heads to a different place, but the 1-2 hour segments pack a ton of info.

“A Murder on Orchard Street”

ABC News reporter Christina Kiely has been following the case of 25-year-old Burke O’Brien since he was shot and killed in 2003. She’s as much of an expert on the story as anyone can be, and the twists and turns her investigation takes are well worth the listen. Plus, since she’s the one responsible for all of the original footage, her perspective is certainly a unique one.

“The Last Podcast on the Left”

“The Last Podcast on the Left” is pretty much the go-to for newbie death cast fans. Hosts Ben Kissel, Marcus Parks, and Henry Zebrowski are longtime friends who talk about anything and everything, from serial killers to ghosts to creepypastas. They also do live podcast recordings, so if listening to the sound of some dudes’ voices just isn’t enough for you, you have options.

Earthen Brown is a deputy sheriff who approaches true crime stories from the perspective of trying to assess the motive behind them. There’s a different case each week, and they’re all equally horrifying on their own, but getting into the why behind them adds an additional layer. You may start to question all of humanity after the 14 episode run.

“Serial Killers” stands out from other true crime podcasts in that its stories aren’t told from an investigative standpoint. Rather, Greg Polcyn and Vanessa Richardson relay events like they’re reading from an audiobook. Kind of like when your parents would read you bedtime stories as a kid. Only with more murder. Or maybe not, we don’t know what kind of house you grew up in.

“My Favorite Murder” is the result of putting two hilarious ladies together who just happen to also share a passion for true crime stories. Georgia Hardstark and Karen Kilgariff each come to the table with their own murder story, but investigative journalism this is not. It’s at the top of the comedy charts for a reason, and it’s a must-listen for those of us who maybe aren’t so focused on complete accuracy.

Like “My Favorite Murder,” “True Crime Garage” starts with two friends coming together to share a story about murder and mayhem, and ends with a boozy discussion of the case’s details. Nic and the Captain are both excellent storytellers, but the best part of “True Crime Garage” is actually listening to them as they get buzzed. Because beer makes every story infinitely better.

The “S” stands for “Shit.” This one is an actual spin-off of “Serial” and is put together by the same broadcasting company, but it involves a southern murder, a treasure hunt, and an actual family feud. It has all the makings of a great Hollywood film, but it’s real life. And real bingeable.

Listening to a story about a brutal murder can feel a little jarring. Listening to a dude with a thick AF Australian accent tell said story over a creepy chiming sound just takes things to a whole other level. And while most cases are contained in a single episode, a few — like “The Yorkshire Ripper” — span two or three, so there’s definitely something in here for every type of death fanatic.

Have you ever watched a true crime doc on TV and thought to yourself, This has to be fake? Well, “A Very Fatal Murder” is. As in, you can thank the folks over at The Onion for taking a stab at the genre with this parody podcast. It’s everything you’ve ever loved about true crime, minus all that “true” garbage.