The Most Insane Meltdowns In The History Of Sports

Zarouhi Mikaelian
The Most Insane Meltdowns In The History Of Sports April 18, 2018 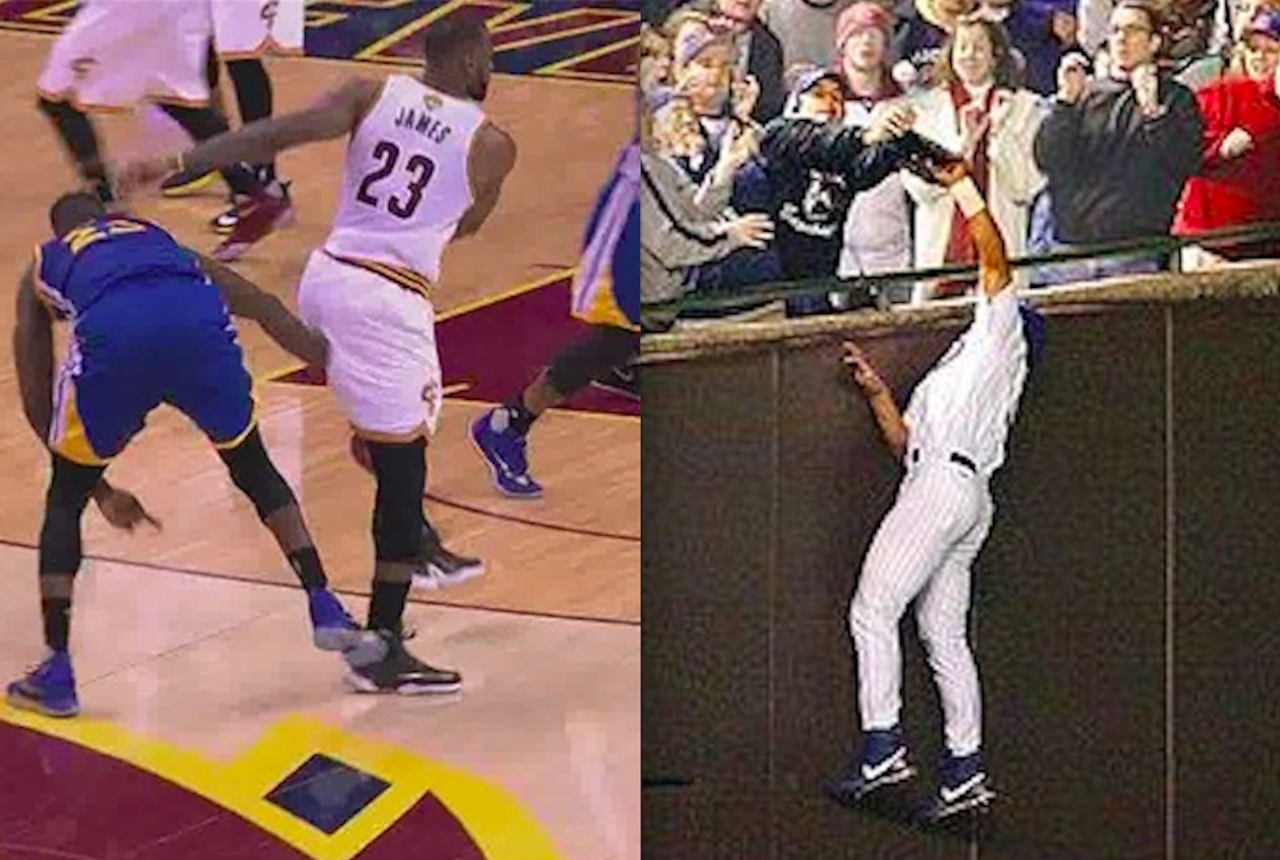 What are the worst sports meltdowns of all time?

Every caliber of professional in the world of sports is susceptible to a hard-to-watch freakout. That means minor-league managers, independent-league infielders, career backup NBA point guards, NBA flameouts, and MLB umpires. But it also includes hall-of-fame pitchers, hall-of-fame hitters, hall-of-fame coaches, hall-of-fame quarterbacks, hall-of-fame tennis players and hall-of-fame heavyweight boxers.  Indeed, draft busts and legendary sports heros alike have caused chaos.  We're talking all-out brawls with fans, falling apart under the brightest lights, and literally spitting in the face of an official. So here are the most notorious sports meltdowns of all time.

The 2007 Mets had a comfy seven-game lead in the National League East with 17 games remaining on their schedule. It'd evaporate — the Mets needed a win agaist the division's last-place Florida Marlins on the last day of the regular season and had ace Tom Glavine on the mound; he got just one out and surrendered seven runs to complete a 5-12 skid and miss the playoffs.

The Lakers' attempt at defending their 2010 title ended in emphatic fashion in the second round of the 2011 playoffs — in a sweep at the hands of the eventual champions, the Dallas Mavericks. The last game wasn't pretty: The 122-86 loss was punctuated by Andrew Bynum's clotheslining an airborn J.J. Barea to earn an ejection in the fourth quarter.

Ten years after defending his heavyweight boxing titles against Trevor Berbick, Larry Holmes fought him again — on the street. While celebrating his 1991 knockout victory over Tim Anderson, Holmes and Berbick threw down and had to be separated by police. Soon after, Holmes ran over two cars, seen here, to get back to Berbick and continue the donnybrook.

After 135 games, the 2011 Boston Red Sox had the best record in all of baseball. Then they finished the season 7-20, culminating in a Jonathan Papelbon blown save on a walk-off hit surrendered to the Baltimore Orioles, who finished the year with the fourth-worst record in baseball.

Rick Ankiel's impressive rookie campaign in 2000 extended into the first two innings of the St. Louis Cardinals' postseason. Then came the third inning, when the starting pitcher threw five wild pitches to help the Mets to victory. One of baseball's more infamous cases of the yips, Ankiel showed his athletic prowess by reinventing himself as an outfielder and making it back to the majors.

When Dennis Rodman tumbled into the stands during a January 1997 game against the Minnesota Timberwolves, he reacted by berating a cameraman and kicking him in the groin. "I really wasn't trying to physically hurt anybody. You know, just the heat of the moment," Rodman later said. We should definitely take the word of this totally levelheaded individual.

Lloyd McClendon wasn't much of a base stealer during his playing days, swiping just 15 bags in his eight-year career in the bigs. But as the manager of the Pirates, he resorted to stealing first base to protest a call in June 2001. Afraid to ask the heated skipper for the base, the grounds crew found a new first base, and Pittsburgh rallied to win in extra innings.

Two years after his last game in the majors, José Offerman was trying to find his way back by playing for the Long Island Ducks of the independent Atlantic League. Instead, he found himself in major trouble, charging the mound with a bat in his hand and injuring Bridgeport Bluefish catcher John Nathans. The infielder was ejected and charged with second-degree assault.

17. Phillip Wellman Goes All Out

In perhaps the most hilarious managerial fit of all time, Phillip Wellman, then the skipper of the Double-A Mississippi Braves, lost it when his pitcher was tossed for using a foreign substance. Wellman covered the plate in dirt, drew a new, larger plate, tossed third base into the outfield, crawled toward the rosin bag on the mound, and hurled it grenade-style in the ump's direction. His three-game suspension was well worth it.

16. Izzy Alcántara Gets His Kicks

Izzy Alcántara was a powerful prospect for the Red Sox, hitting 36 home runs in 119 games for the Pawtucket Red Sox in 2001. He revealed the secret to his strength during a meltdown in July, when he showed off his powerful legs by kicking catcher Jeremy Salazar of the Scranton/Wilkes-Barre Red Barons in the face and charging the mound after an inside pitch.

It's not clear who deserves blame for this meltdown — after being rung up by ump John Hirschbeck on a called third strike, Roberto Alomar lost it, hocking a loogie in the home plate ump's face, then getting personal after the game, saying the ump had been "real bitter" since the loss of his son to rare disease adrenoleukodystrophy. Alomar said his tirade was a result of the ump's insulting his mother with racial slurs. The two eventually made up and became friends.

John McEnroe led Mikael Pernfors in sets, 2-1, in the fourth round of the 1990 Australian Open when he earned his third code violation for an automatic ejection, the first ejection for misconduct at a Grand Slam since 1967. McEnroe earned violations for intimidating a lineswoman, smashing his racket, and cursing at the umpire.

In easily the goriest brawl in NBA history, Los Angeles Lakers big man Kermit Washington nearly killed Rudy Tomjanovich as the Houston Rockets forward attempted to break up a scuffle. The punch fractured Tomjanovich's skull, leaving him unconscious in a pool of blood. "I have seen many people with far less serious injuries not make it," said the doctor who repaired the future head coach's skull.

Serena Williams lost her cool and her U.S. Open semifinals meeting with Kim Clijsters in 2009. When a lineswoman called a foot fault during Williams' serve, the tennis superstar unleashed on her: "I swear to God I'll f***ing take the ball and shove it down your f***ing throat." Holding match point, Clijsters was awarded the winning point for her opponent's outburst. Williams was fined $82,500.

Famed college basketball coach Bob Knight had plenty of spectacular seasons, but 1984-85 wasn't one of them. His Hoosiers went 19-14 overall and 7-11 in Big Ten play. So frustrated was the infamously short-tempered honcho, that during a 72-63 loss to Purdue, the squad's second defeat at the hands of the Boilermakers, Knight tossed a chair across the court.

Note to sports fans everywere: If your team's opponent features a player nicknamed "the Tasmanian Devil," maybe don't enter the field of play and punch his teammate in the face. A Rangers fan did just that at MSG in 1979, and the Tasmanian Devil himself Terry O'Reilly led the charge of Bruins scaling the boards and fighting with Rangers fans.

The 1983 Kansas City Royals were a team to forget, save for what's become known as the Pine Tar Incident. With his team trailing the New York Yankees by one with two outs in the bottom of the ninth on the road, George Brett stroked a two-run home run. But at Yankees manager Billy's request, umpire Tim McClelland inspected Brett's bat and called him out for excessive pine tar, ending the game. Brett was right to be pissed — the Royals won a protest of the decision, claiming victory when the teams replayed the game from Brett's homer on.

8. They Are Who Dennis Green Thought They Were

The sound bite forever associated with Dennis Green — "They are who we thought they were" — came after the head coach's 2006 Arizona Cardinals suffered one of the more impossibly painful losses in NFL lore. After taking a 23-3 lead with less than two minutes to go in the third quarter, the Cards saw two fumbles returned for Chicago Bears touchdowns before Devin Hester won the game with an 83-yard punt return to the house.

The last strike in the career of French soccer legend Zinedine Zidane was a header to the chest of Italian midfielder Marco Materazzi in the 111th minute of the 2006 World Cup finals. After he was sent of with a red card, his side lost in a shootout. Zidane was suspended for three matches, but he retired before serving the ban.

6. Cubs Blame It On Bartman

Though Chicago Cubs fan Steve Bartman bore the brunt of the criticism, the team had themselves to blame for imploding against the Florida Marlins in the 2003 National League Championship Series. Bartman prevented Cubs outfielder Moises Alou from making a tough catch on a foul ball with Chicago up 3-0 in Game 6, one inning away from going to the World Series. The Cubs instead surrendered eight runs in the eighth inning to lose, then blew a two-run lead to fall in Game 7.

In the midst of the 1965 National League pennant race, New York rivals the Giants and the Dodgers got violent on August 22. While taking his turn at the dish, Giants pitcher Juan Marichal, anticipating retaliation for hitting two Dodgers earlier in the game, struck Dodgers catcher Johnny Roseboro on the head with his bat, then took the weapon into the diamond before being restrained by teammates. He was fined $1,750 and suspended eight games.

For referee Mills Lane, Mike Tyson's biting a chunk of Evander Holyfield's ear off and spitting it onto the mat wasn't enough to earn him an ejection during the boxers' 1997 rematch for the WBA heavyweight belt. Then Tyson went for Holyfield's other ear, earning his ejection and falling to his rival for the second time in eight months.

3. Falcons Fold In The Super Bowl

I swear it gets more astonishing every time I think about it: The Atlanta Falcons held a 28-3 advantage over the New England Patriots in the fourth quarter of Super Bowl LI and still, somehow, managed to suffer the first overtime loss in the history of the big game.

In case you haven't heard: The Golden State Warriors blew a 3-1 lead to the Cleveland Cavaliers in the 2016 NBA Finals. And it's all thanks to Draymond Green, who fell for the LeBron James' obvious efforts to get the Warriors' defensive stopper to retaliate physically. Retaliate he did: Dray punched LeBron in the nuts, earning a suspension for Game 5. Without Golden State's best defensive player, the Cavs managed to steal the road game before taking Game 6 at home, setting up one of the most memorable games in NBA Finals history.

1. The Malice At The Palace

Then Indiana Pacers forward then known as Ron Artest and Detroit Pistons center Ben Wallace got into it with under a minute remaining in Pacers blowout road win in November 2004. Then a fan threw a beverage at Artest, and the mercurial Pacer went into the stands to fight the wrong guy. His teammates Stephen Jackson, Jermaine O'Neal, and Anthony Johnson also fought Pistons fans. In the end, nine players were suspended for a combined 146 games and together lost roughly $11 million.