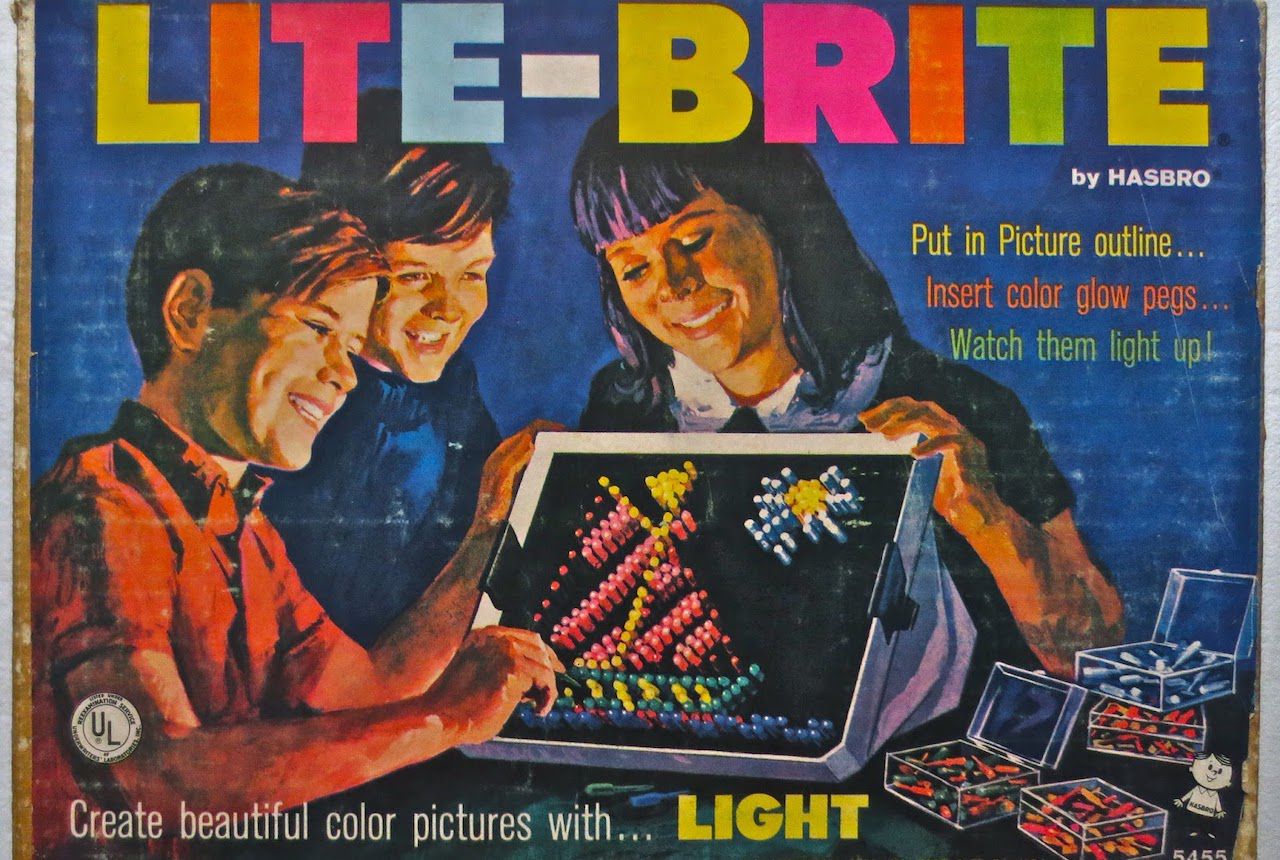 Do you remember the '60s? Because if you do, you know getting the latest toy was the difference between being a groovy kid or a square. So check out the coolest and best 1960s toys on the market. Which ones will you add to your wish list?

Throw a disc into a slot. Throw the eyepiece onto your eyeballs. And observe the beauty of pseudo 3D landscapes in glorious full color. While developments of the toy existed as early as 1919, the View-Master took off in the '60s thanks in part to technological advances and tie-ins with popular TV shows of the day.

A toy named after the sound it makes when you do it wrong. Sound weird? It wasn't for David N. Mullany, who invented this particular ball for easier pickup baseball games with his son. The name came from what happens when you don't make contact: whiff! In the 1960s, everyone was playing whiffle ball, even organizing makeshift tournaments in their backyard.

In 1959, a Danish woodworker named Thomas Dam couldn't afford a Christmas gift for his daughter. So, he carved one: the very first Troll doll. Folks from neighboring Danish towns wanted one, and the brand quickly expanded from there. If you find a vintage '60s troll, make sure it's legit. Dam made some errors in his original copyright attempts, resulting in lots of knockoffs.

Tressy, created by furniture designer and inventor Jesse Dean, had a curious feature setting her apart from other dolls of the era. If you pushed a button on Tressy's stomach, her hair could grow. Thus, kids were able to comb and style their Tressy's hair into whatever hip look they wished. Everyone's Tressy was inherently unique.

Remember the '90s toy staple, Creepy Crawlers? That started in the '60s as just one pack of the Thingmaker. With the toy, you could create little rubbery plastic creatures by pouring "Plastigoop" into molds and heating it up on a provided minioven. As you might imagine, safety concerns abounded with this particular toy.

In the 1960s, toymakers were obsessed with idealizing domesticity. Thus, we had brands like Suzy Homemaker, a line of toy versions of everyday household items like a hair dryer, a blender and a washing machine. "Suzy Homemaker" became a popular phrase in the cultural lexicon, and feminist thinkers eventually adopted it to decry women who didn't challenge societal expectations.

It's just a dang rubber ball. And yet Wham-O's Superball was the toy sensation of the 1960s, crushing the ball market with its simplicity. To get to this simplicity, however, chemist Norman Stingley had to invent a new molecular compound called Zectron. As a result, the Superball could leap over a three-story building if bounced hard enough. Superman, meet Superball.

You can stick it to your hand. You can copy and paste newspaper print. Or you can just goop it around. Silly Putty is the perfectly moldable semiviscous, semirigid material that was such a smash in the '60s, it was even taken aboard the Apollo 8 spacecraft in 1968. And its origin story is as fluid as the material itself, with many inventors fighting for and claiming credit.

Throw your buds into a red wooden wagon, and off you go. The Radio Flyer toy wagon is an American icon, owned and coveted by many kids of the '60s. Radio Flyer produced other mobile toys in the era, including a tricycle and hobby horse. Antonio Pasin originally began making these wagons in 1917. His grandson, Robert, is the company's CEO to this day.

Don't you love toys that let you be creative? Snyone can play with a rigid piece of plastic. But with Play-Doh, the nontoxic colorful cornucopia of clay, the only limits are your imagination (and whatever kits your parents can afford). The material was invented originally by soap manufacturer Noah McVicker as an attempt at a product that could clean up coal residue.

What mood are you in? Answer carefully, because the life and identity of this toy may depend on it. You see, you're in charge of Mr. Potato Head's facial features and accessories, based on a number of plastic attachments. So if you're feeling hunky-dory, MPH will look normal. But if you've got some stuff to work out, let's just say MPH might resemble a Picasso more than a children's toy.

The box says it all. With Lite-Brite, you can create beautiful color pictures with... LIGHT. After you place your colored pegs into the box and turn it on, it lights up with a warm, multi-colored, immediately nostalgic glow that's inimitable.

It's a plastic circle you swing around your waist. You know, for kids! The hula hoop has early, wide-varying origins dating back to ancient Native American rituals, 14th-century English medicinal techniques and 18th-century Hawaiian dances. But in 1957, a woman named Joan Anderson brought a hoop to America from Australia, inventing the name "hula hoop" at a dinner party. The rest, including its explosive popularity through the '60s, is hula history.

There's nothing more joyful than clicking these little bricks together. And there's nothing more agonizing than stepping on one. Legos were developed originally in the late '40s by Danish carpenter Ole Kirk Christiansen. The name Lego comes from a Danish phrase meaning "play well." And in the '60s, any lucky kid who had these nifty rectangles of imagination played well, indeed.

For awhile, if you wanted tiny cars to zoom around, Matchbox was the only game in town. Then, in 1968, Mattel set fire to the game. Hot Wheels were the trailblazing rock and roll to Matchbox's jazz. Inventor Elliott Handler's goal wasn't accuracy but style. He used customized, impractical aesthetics to achieve these goals, resulting in wheels that were appropriately hot.

Inspired by the glut of 1950s atomic-era-influenced horror flicks (which were gaining a second popularity thanks to reruns on TV), Hamilton Invaders gave kids the opportunity to destroy giant buglike creatures with all matters of army men and vehicles. Finding these toys in the modern era is unlikely, as manufacturing company Remco produced them for only one season. Kids loved them, but parents hated having such gross creatures in their home.

It's hard to overstate the importance of G.I. Joe, originally developed in 1963 by licensing agent Stan Weston. They helped coin the term "action figure" out of marketing necessity. Given the rigid gender politics of the '60s, toymakers were concerned boys wouldn't play with anything resembling dolls, even if they were meant to engage in traditionally masculine activities. Thus, "action figure" was born, and the toys entered countless homes to change the game forever.

In the '60s, mod culture swept the world thanks in part to hip British bands like the Beatles, the Who and the Kinks. Mattel jumped on the fad by introducing Francie Fairchild, an English friend of Barbie's who emigrated from London to teach the world her swinging ways. From her hairstyle to her clothing choices, everything about Francie was designed to be as trendy as possible.

How do you capture the joys of a 2D cartoon in an inherently 3D form like dolls? If you're Hank Kramer, you invent Flatsy dolls, characterized by their bright, long hair and pseudo-two-dimensional state of being. If you find one now, make sure it has the word "Ideal" engraved in the back. Otherwise, that's a knockoff Flatsy, friend.

With Etch A Sketch, you get the joys of creation and the joys of destruction combined in one red rectangle. French inventor Andre Cassagnes first came up with the toy in the late '50s, bringing his creation to an international toy fair in Germany. The Ohio Art Company bought it, repackaged it and marketed to American homes starting Christmas of 1960. It was a smash success.

Before kids pre-ordered the newest "Madden" video game every year, they were content with this primitive version of electronic football. Miniature players would "run" across the field, thanks to player pegs and the board's omnipresent electronic rumbling. Games were thus marked by a raucous sense of chaos.

Ever try to bake something and get frustrated? Us too. And we can all blame the Easy-Bake Oven, a '60s toy that gave kids the power to bake miniature cakes with provided powders and, yes, a (very small) working oven. Ads for the product featured a puppet called the Gooney Bird, created by a young Jim Henson.

Kids talk to their dolls all the time. But what if their dolls could talk back? That irresistable question was answered by Mattel's Chatty Cathy, a pull-string doll that could say up to 11 phrases like "I love you" and "Let's play school." Hey, as long as it doesn't say anything like "My name is Chatty Cathy and I'm going to kill you," it's OK by us.

Ever heard of Barbie? You know, the most iconic doll ever made? She was originally developed in 1959 by businesswoman Ruth Handler, making her initial ascent into cultural ubiquity a uniquely '60s phenomeon. Since then, Barbie has stood the test of time, while constantly adapting and shifting to any new discoveries of what we want children to experience when they play.