Matthew Loffhagen
Animal Rescuers Save Bear Cub With a Bucket Stuck on Its Head for 3 Days November 2, 2018 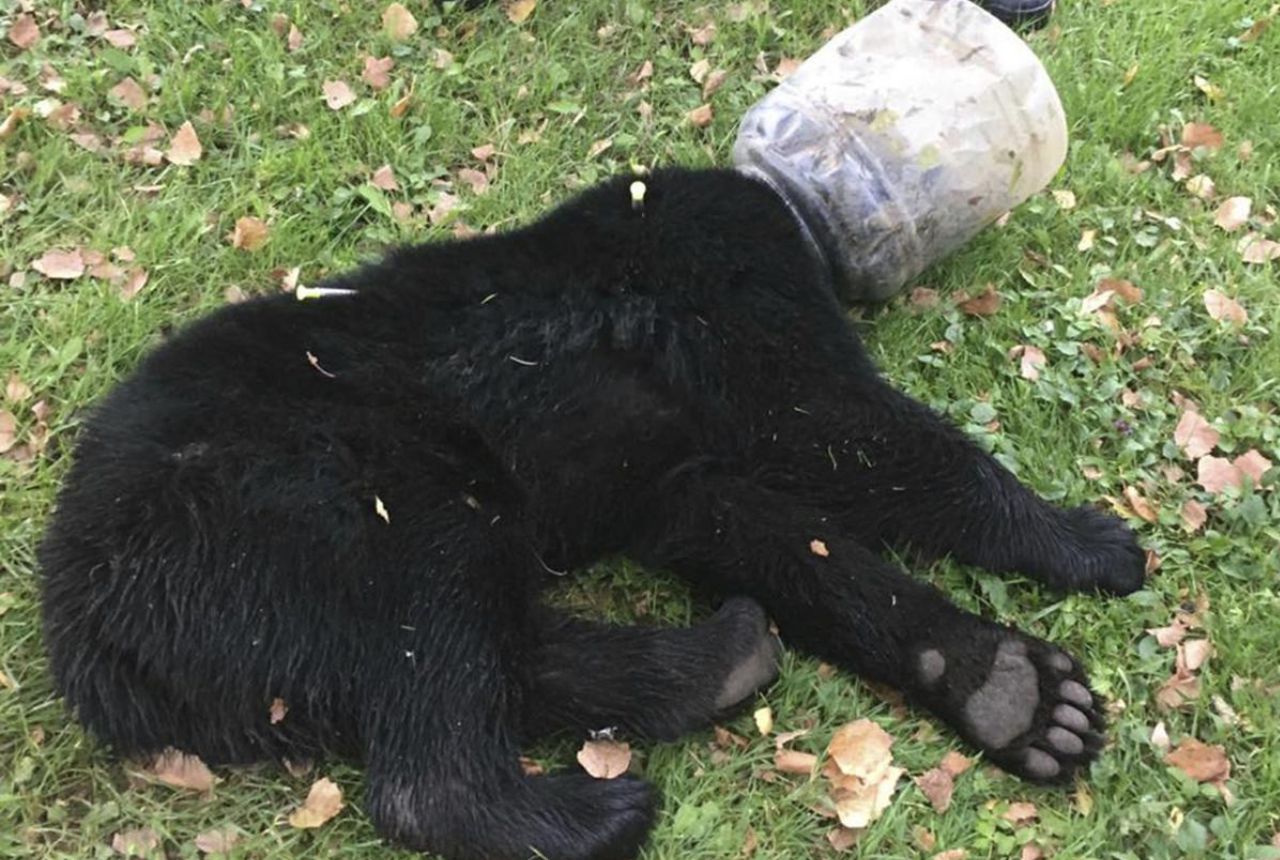 Visitors to the Wisp Resort got an interesting show when they saw a bear cub in an unusual prison. Because the poor cub somehow found a bucket stuck on his head. But he couldn't get it off. And that began a three-day chase. See how these animal rescuers save a bear cub...

Onlookers in McHenry, Maryland, were treated to a rather interesting site. One of the area's ursine residents, a 100-pound black bear cub, had managed to get its head stuck in a bucket.

In photos and videos that have been taken of the cub, the poor thing seems to be doing its best to appear nonchalant and calm. Perhaps the bear is hoping that if it acts chill enough, nobody will even notice its embarrassing predicament.

Thankfully, enough people did notice this poor animal's plight, and the local Wildlife and Heritage Service of the Maryland Department of Natural Resources took an interest in the cub. Even so, they had their work cut out for them as they tried to track the bear down.

Finally, at McHenry's Wisp Resort, rescuers managed to track down and tranquilize the poor animal. This unique event just happened to coincide with the resort's annual fall festival, and made for a pretty interesting unplanned spectacle.

With the bear safely unconscious, it was a (relatively) easy task to get the bucket off its head. After three days, the animal was likely very happy to be able to eat again.

The bucket, safely removed, this bear was able to return to the wild just as soon as it woke up. Getting tranquilized and helpfully fixed up meant that the process was as smooth as possible for the bear cub.

It turns out that bears really like sticking their heads in buckets, jars or any pot that might once have contained something tasty. Fans of Winnie-the-Pooh are probably not surprised by this information.

This particular bear was lucky. Its pot was clear, so it didn't restrict its vision too much. It couldn't eat, but it could at least see where it was going! Not all bears get stuck in this kind of bucket...

Another Bear in a Bucket

A few years ago, another bear cub didn't quite enjoy the same clear plastic benefits. A (sadly slightly blurry) video of the bear's rescue shows how the process isn't always easy.

Having discovered the bear in danger, a friendly helper tried desperately to try and pull off the bucket. But it was no use, and the poor cub was getting anxious in its new trap.

Making a Run For It

While the man tried desperately to get the bear out, it ended up trying to run away, slipping under a fence by accident, and making its way away from the perceived threat.

Why Did the Bear Cross the Road?

Unfortunately, the bear was heading for a worse fate. If it ran out onto the road, it was in danger of getting hit by a car without being able to see it coming.

Watch Out for That Bear

Luckily, the road wasn't too busy, and an approaching car was able to stop in time. Without any better ideas, the man decided to try and chase the bear away from traffic, and into the woods.

Dogpile on a Bear

Tranquilizer guns aren't always on-hand for these kinds of scenarios. Instead of the more professional solution, a bunch of helpful rescuers simply piled on top of the bear, pinning it to the ground.

I Saw a Bear

With the bear more or less contained, a helpful (and very brave) rescuer started sawing off the bucket with a hacksaw. All, of course, while trying to steer clear of the set of teeth that were about to be set free.

Even the saw didn't manage to fix the problem. Finally, a pair of pliers managed to prize the bucket apart. Then, everyone scrambled to get away from the newly free but very unhappy bear cub.

But not all bears that put buckets on their head do so unwillingly. One adorable polar bear has gained global attention for its eagerness to play dress up while hanging out at the zoo.

This bucket isn't fixed onto the bear's head. Instead, this is a very deliberate fashion choice, and it's hard to argue with the fact that the cub looks good.

Is this bear practicing at being an astronaut? Is the bucket part of some elaborate fantasy? Either way, this is pretty darn cute.

Sadly, though, this bear is also the victim of a small, confined prison. While the other bears in this gallery are wild animals, temporarily trapped in buckets, this polar bear is constantly pinned in by an electric fence.

It's likely that the bucket helmet is probably a game that keeps the bear from getting bored in an enclosure that's too small for it. At the same time, life in a zoo is at least a little more stable and safe that the rapidly shrinking arctic territory that wild polar bears call home.

Spare a thought for rogue bears the next time you leave a bucket in your yard. You never know who might get stuck in it.