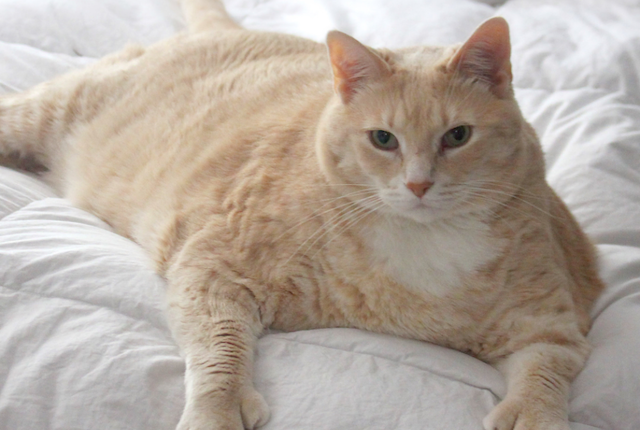 Bronson is a lovable cat. And there’s a whole lot of Bronson to love. Because this cat weighs 33 pounds. So he’s one big kitty in need of one big diet.

Mike Wilson and his girlfriend Megan Hanneman are furniture designers

Furniture designers for cats, that is. Indoor cats, specifically. Their company, Catastrophic Creations, makes wall-mounted cat furniture with the purpose of promoting activity for cats that don’t generally receive a whole lot of exercise otherwise.

The couple already has three cats

[dx_custom_adunit desktop_id="RTK_K67O" mobile_id="RTK_5yk0"] They help test Catastrophic Creations’ creations. And they let Wilson and Hanneman know which pieces will likely be better sellers. Because anyone who knows cats knows that they have zero problem expressing their utter disdain for something.

A few months ago, they decided it was time to bring a fourth into the mix

What’s three solid feline opinions on on wall-mounted furniture when you could have four? As any good, growing business knows, to appeal to a larger audience, you need to have a larger focus group. Even if that focus group walks on all fours.

So they headed down to their local Humane Society

Which is where they first laid eyes on Bronson. But to land a first meeting with him, they’d need to be interviewed by a staff member first.

That first day, it wasn’t going to happen

[dx_custom_adunit desktop_id="RTK_K67O" mobile_id="RTK_5yk0"] The Humane Society was backed up, and there was no way Wilson and Hanneman were going to be able to get in for a one-on-one with Bronson. They didn’t leave empty-handed though. Bronson did flash his backside, which we’d call a win.

But Bronson had made an impression

Both Wilson and Hanneman had fallen for the fat cat, even though the most they’d seen of him was his big butt. The couple couldn’t stop talking about how much they wanted to help him lose the extra weight.

The average domesticated house cat weighs somewhere around 8 to 10 pounds. A few larger cat breeds, like the Maine Coon, weigh anywhere from 13 to 18 pounds. Bronson, however, was not a Maine Coon.

So they went back to the Humane Society

They assumed Bronson’s previous owner was an elderly person

Because how else could a 3-year-old cat blow up to an astounding 33 pounds? Table scraps. Table scraps and the probable memory issues that arise in one’s twilight years while trying to keep track of the number of times the cat’s bowl has been filled.

But Bronson was a one-of-a-kind sweetheart

Turns out, Bronson wasn’t just a kind kitty. He’s also a polydactyl cat, which means he was born with extra toes and pronounced “thumbs.”

And he felt right at home with Wilson and Hanneman

[dx_custom_adunit desktop_id="RTK_K67O" mobile_id="RTK_5yk0"] Along with the couple’s other cats, Ickle, Heisenberg, and baby Gwildor. Even though his preferred method of play involves lying around on a pillow, Bronson can still keep up with the others, personality-wise.

Bronson also felt at home in his new vet’s office

His first visit to the vet mostly revolved around everyone in the office coming in to the exam room to admire his robustness. Of course, they ran a few tests and discussed his extra poundage, but mostly it was admiration.

Wilson and Hanneman were told Bronson would need to lose weight slowly. If he crash diets, there’s a good chance he would get fatty liver disease, which is a serious condition that can be fatal.

So Wilson and Hanneman are taking their time

[dx_custom_adunit desktop_id="RTK_K67O" mobile_id="RTK_5yk0"] They’ve been making small adjustments to Bronson’s food, and changed his diet only three times in the first two months after they gotten him. They put him on a 50/50 mix of the kibble he was on at the Humane Society and a grain-free wet food at home.

They’ve been adjusting his exercise regimen too

One of the first things the couple did was separate Bronson from his upstairs napping spot so that he’d have to do some leg work to get to it. After seeing his overwhelming dedication to sleep, however, they worried it would be too much on his joints.

So, like the food, they made a few small changes

Like letting him hang out where he wanted, at least until he had dropped a few pounds and the effort to get upstairs wouldn’t come with a side of permanent joint damage.

They’ve also been moving his food bowl around the room

[dx_custom_adunit desktop_id="RTK_K67O" mobile_id="RTK_5yk0"] Because what’s reward without a little dedication and hard-ish work? Bronson hasn’t been the biggest fan of this method of exercise. You probably wouldn’t want to have to search the house everyday just to get a snack in either.

Sure, he can’t do a whole lot of running, but he can lay on his side and kick the shit out of his favorite toy tomato. It’s stuffed and filled with catnip.

OK, so he isn’t a marathon runner, either

Bronson gets around the house best by being carried by his owners. And by carried, we mean moved from room to room via a giant pillow. For ergonomic reasons, of course. Because back health and heavy lifting and all that.

[dx_custom_adunit desktop_id="RTK_K67O" mobile_id="RTK_5yk0"] His intention was to not only track Bronson’s weight loss progress, but to share his amazing story with the world. Because, really, who in their right mind can turn away from an adorable 33-pound cat with thumbs?

And the “fan” response has been overwhelming

In just a few months, Bronson the cat has racked up more than 97,000 followers on Instagram. His official job title is “Public Figure,” and he is 100 percent more famous than any of us will ever hope to be.

Wilson and Hanneman have been tracking his progress regularly

They post photos of Bronson almost daily (sometimes more than once), usually in his natural habitat: a soft bed with a sunny view. Sometimes they post pics of his brothers too, but mostly it’s a lot of fat cat filling the frame.

[dx_custom_adunit desktop_id="RTK_K67O" mobile_id="RTK_5yk0"] For one thing, Bronson is undeniably adorable. But he’s also a pretty big (so to speak) inspiration to anyone out there struggling with their own weight-loss journey. It’s a slow-going process, but he’s proving that success is possible.

And he still has a good 15 to 20 pounds to go. At the rate he’s been losing weight, he’ll reach his goal summer bod in about three years. But we kind of think he’ll manage to make it in less time, especially once he starts really hitting those stairs.

He’s got a long way to go, but he’s certainly up for the challenge

Bronson is only at the beginning of his journey, but he’s incredibly motivated (which we can only assume from his IG), as well as charming and handsome. And he’s proof that it doesn’t matter what size you are if you’ve got a rockstar personality, which he definitely does.