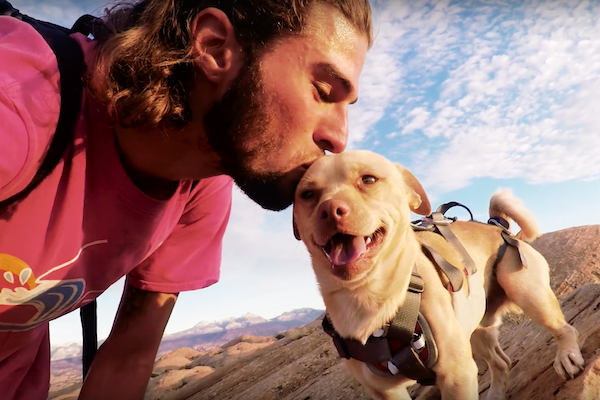 Sometimes, friends enter our lives when we least expect them to. And they change the way we do things forever. But sometimes those friends come in forms that surprise us. Like, say, the form of a tiny abandoned dog on the side of the road. Meet Paco, a stray dog from Mexico who was nearly hit by a car. But now Paco gets to jump off cliffs with Chase, his adrenaline junkie owner. Chase is the kind of guy who can’t just leave an animal in need on the side of the road. And Paco is the kind of dog who definitely just won the owner lottery. So now he travels the U.S. in a converted school bus and lives as a real-life adventure dog.

This is Chase Reinford

Chase Reinford is a 23-year-old YouTuber with nearly 500K subscribers. He makes neat videos about jumping off cliffs and stuff. He’s also got a pretty hefty following on Instagram, if you’re into that sort of thing.

Reinford isn’t content to just sit back and let life pass him by. His goal is to push himself to the limit in every aspect. He’s a pilot and adventurer, but his first and greatest love is cliff jumping.

Chase Has Traveled the Country, Making Videos of His Adventures

He travels the U.S. in a converted school bus. In only 11 days, he and his friends added solar panels, a sink, stove, and a bed to create a veritable adventure vehicle that would allow him to remain on the road for months at a time.

One Day, in the Middle of a Desert Highway, a Stray Dog Jumped into His Life

In November of last year, Reinford was driving through a near-empty desert road on his way to Lake Powell. All of a sudden, the car in front of him swerved to avoid a dog in the middle of the road.

Reinford slammed on his brakes as hard as he could to try to avoid the pooch but almost ran right into him. Luckily, he managed to swerve out of the way just in time, missing the little guy by 3 or 4 feet.

It Was Love at First Sight

Reinford got out of his bus to check on the dog, who ran right up to him and into his arms. Even though everything inside the bus was in disarray, the dog – Paco – didn’t seem to mind, and he made himself at home.

At First, Chase Wasn't Sure if He Was Going to Keep Him

Reinford was used to living on the road, traveling to wherever the next adventure would take him. Having a dog was a huge responsibility, and he wasn’t sure if he was up to the task.

But He Took Paco to go Dirt Biking at Lake Powell

Initially, Reinford thought Paco would be too afraid of the dirt bikes to be able to hang. But he was dead wrong. Paco not only loved the dirt bikes, but he managed to keep up with Reinford and his friends while they were on them.

Then Chase Rented a Boat And Brought Paco Along

The dirt bikes were only the beginning of Paco’s adventures. Reinford rented a boat for a few days thinking Paco would be afraid of the water, but again, the tiny adventure dog proved him wrong. He was turning out to be quite the outdoor companion.

After the lake, Chase went base jumping for a few days

For a while, Reinford left Paco on the bus while he went base jumping for an hour or two. But Paco wanted in on the action, and Reinford quickly realized the little dog deserved a chance at some more extreme activity.

Reinford figured Paco could just have a front seat for the action. At least he’d be able to see what everyone was doing instead of sitting in the bus all by himself. But even that was not enough.

And finally, Chase took him for his first base jump

Paco freaked out when he saw Reinford jump off the side of a cliff, so Reinford made the decision to the dog him along. He strapped a harness to Paco and the two took their first base jump together.

You’d think Paco would have been scared, but you’d be wrong

Not only did Paco love the hike up, but he ran straight to the edge, excited to go. And when he and Reinford jumped, he handled it like a pro, no shaking or whining at all.

Turns out, Paco’s second jump was even better than his first

Now that he knew what to expect, Paco took the jump like he’d been doing it his whole life. And he did it dressed as Santa Claus, which honestly makes the entire thing a thousand percent more adorable.

Reinford believes Paco is a real miracle dog. He should have died on the side of the road that day in November, but instead he’s living it up with Reinford and his adventuring friends. He’s making every day count.

If Reinford's YouTube isn’t enough to satisfy your need for awesome cliff jumping dogs, Paco shares his adventures with Reinford on Instagram at @roadsidepaco. He’s got almost 50K followers already, which is infinitely more than we will ever hope to have.

In January, Paco went on his first airplane ride

He hopped up into the cockpit, ready to go. Although Reinford was nervous about the wind, Paco didn’t seem to mind at all, at least until they got up into the air. When turbulence kicks in, even adventure dogs have bravery limits.

A few months later, he went snowboarding for the first time

Reinford and Paco flew into Salt Lake City to pick up the bus before heading down to Mexico. While they were there, they decided to make a detour up into the mountains to try and find some snowboard-worthy snow.

And he did a better job than Chase

While Reinford was huffing and puffing his way up the side of the mountain, Paco was just cruising along, stoked to be on another adventure. Who would’ve guessed that a tiny dog from Mexico could love being in the snow so much?

From Mexico up through the States and back, Paco has seen and done more than most little dogs will ever do in their little lifetimes. He’s been to beaches, to the snow, to desert mountains. And there’s no telling if and when he’ll stop.

Chase doesn’t always bring Paco with him on his adventures, but he’s there in spirit

Paco isn’t quite the international traveler, yet – Mexico is just a short drive from San Diego – so he hasn’t had the chance to go on some of Reinford's bigger trips, like his recent visit to Thailand. But we know Reinford is always thinking of his best buddy while he’s gone.

On a recent trip to Mexico, Paco became friends with another stray dog named Diesel

When Reinford asked the locals about Diesel, they told him he was a nuisance and that he could have him. He had a gimp back leg and was covered in ticks, but that didn’t stop Reinford and Paco from swooping him up to join them on their adventures.

And Chase quickly fell for Diesel, too

And how could he not? Diesel is just as loving and affectionate as Paco, and he’s playful as hell, too. Besides, Paco could definitely use a furry best friend to keep him company in the sand.

When Reinford took Diesel to the vet, he was told the dog had cancer that it couldn’t be treated and he would be better off left behind. But Reinford wouldn’t take no for an answer, so he took Diesel to a second vet, who’s started him on chemotherapy.

If you’d like to donate to Diesel’s cause, you can check it out here

Luckily, vet costs in Mexico are much more affordable than in the States. Currently, Diesel needs to complete a round of chemo, get his vaccinations, and get some flea and tick medication. Beyond that, he’ll need surgery on his back leg to help with his gimp. Check out (and donate to) Diesel’s cause at https://www.gofundme.com/help-diesel-fully-recover.