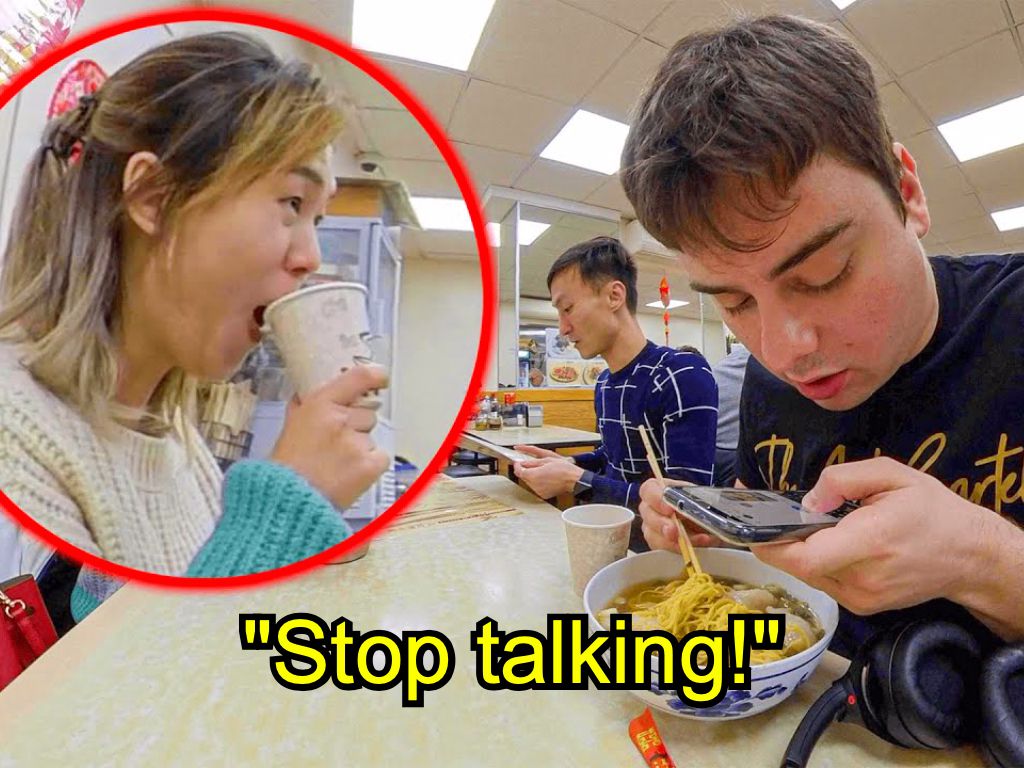 When an ordinary-looking Caucasian customer entered a Chinese restaurant, nobody gave him a second look. Then he started speaking fluent Chinese, and everyone's jaws dropped. But, his server's reaction is the one that really takes the cake. Would she be thrilled that this customer spoke her native tongue or be furious that her conversations to her coworkers were completely understood?

Xiaoma (小马, which literally translates as Little Horse) is a YouTuber with an interesting talent. Despite looking like any standard clueless white guy, he actually speaks fluent Mandarin Chinese. And this gives him the opportunity to listen in on conversations that some people wish he couldn't hear.

So what can you do in New York City when you secretly speak Chinese? Well, for one thing, you can eat in Chinatown and freak everybody out. From customers to staff, no one expected Xiaoma's hidden secret.

Xiaoma likes to play a game in various Chinese restaurants. He'll stare at the menu for a while and ask a lot of obvious questions to make him seem like he's completely clueless...

Then, Xiaoma will switch to speaking completely in Chinese, and everyone around him will be taken by complete surprise. Including bystanders who thought that their conversations weren't understood by the clueless guy next to them.

This fellow restaurant patron was absolutely blown away when Xiaoma started speaking Mandarin. It's incredibly rare for white foreigners, or laowai (老外), to bother learning Chinese. As such, most Chinese speakers are taken by surprise when they hear the language coming from someone who is ethnically European.

Xiaoma waited for new patrons to sit near him in the restaurant, then started a phone call in English. Mid-conversation, he switched to Mandarin, and that's when his fellow diners' jaws dropped.

Again, Xiaoma's fellow patrons couldn't believe what they were hearing. It really is this rare to hear a laowai speaking Chinese this well. But, there are many dialects of Chinese that are completely different. Surely, Xiaoma wouldn't understand Cantonese, right?

Xiaoma has around two million subscribers at present, particularly among Chinese American communities. This man recognized him from another of his videos, and for the moment, his cover was totally blown.

Of course, not everyone reacts with surprise. When Xiaoma busted out his Chinese in front of this woman, she was intrigued, but did her best not to be rude and react in shock.

Having surprised everyone at this particular restaurant, Xiaoma moved on to another. Here, his server tried her best to be patient as he pretended to stumble over the menu and its many options.

When Xiaoma started speaking in Chinese, this woman couldn't help but be surprised. He even spoke a little of her native dialect, Cantonese, an official language in Hong Kong. She complimented him on his fluency, and said she wants to show him something on her phone...

The woman held up a picture of Chinese-American actor and musician Awkwafina. "You speak better Chinese than her," she said enthusiastically.

Xiaoma then moved on to yet another restaurant, where he started trying to annoy his server with his lost laowai act. Unfortunately, he didn't get much chance to play this game for long in this restaurant...

Even before Xiaoma's food arrived, one of his fans came up to say hello. They had a casual fist-bump (to avoid shaking hands) and chatted for a minute, but unfortunately, now everyone in the restaurant knew that he was a famous YouTuber.

Another day, Xiaoma tried playing his game again. This time, though, he tried to disguise his identity with a pair of dark sunglasses and a hoodie. Surely he wouldn't be recognized for his hidden talents that way.

The women in this restaurant were absolutely beside themselves when Xiaoma started speaking in Mandarin. One begged for him to stop; she just couldn't handle hearing such fluent Chinese from a laowai!

Xiaoma even started speaking in Fuzhounese, a Chinese dialect that the women speak at home. Hearing a laowai speak Mandarin is one thing, but speaking a regional dialect that even most Chinese people don't know shows that Xiaoma has been studying Chinese for a long time.

After chatting a bit more, the woman said she wishes they could be friends. Xiaoma is enthusiastic, and offered to add her as a friend online. His skills were so impressive that she even asked a favor of her new friend...

The two new friends get out their phones to swap details. The woman asked Xiaoma if he would teach her English, but Xiaoma insisted that her English was already great.

Sliding Into Her DMs

The two new friends chatted for a bit longer, and Xiaoma ordered a Fuzhou special peanut dish. The woman was surprised he had even heard of it! The dish is known to be from just one region of China, and isn't quite as popular as Chow Mein.

When Xiaoma tried the next restaurant on his list, he got more than he bargained for. The staff there was going to give him a lot more trouble than he realized and even his Chinese speaking skills wouldn't be enough to get him out of it.

A Voice From the Back

First, a chef in the back of the kitchen started yelling. When he heard Xiaoma speak and then looked up to see him, he was amazed that he was not ethnically Chinese!

With all this attention from the kitchen, someone else saw through Xiaoma's disguise. He has played his game in too many restaurants, and now people can see him coming!

When Xiaoma started speaking Fuzhounese here, the staff was blown away. This woman also said that he's very handsome, but Xiaoma responded that many people lately tell him that he's getting fat (probably because he keeps eating four meals every time he makes a YouTube video!).

Finally, another man arrived in the kitchen, and instantly recognized Xiaoma. He's definitely become too famous to keep playing his game!

Sheepishly, Xiaoma admitted his true identity. It seems he couldn't fool a single person in this particular restaurant. Perhaps it's time to try visiting Chinatown in another part of the US, or else visit a different country entirely!