30 Disney Couple Tattoos That Will Make Your Dreams Come True 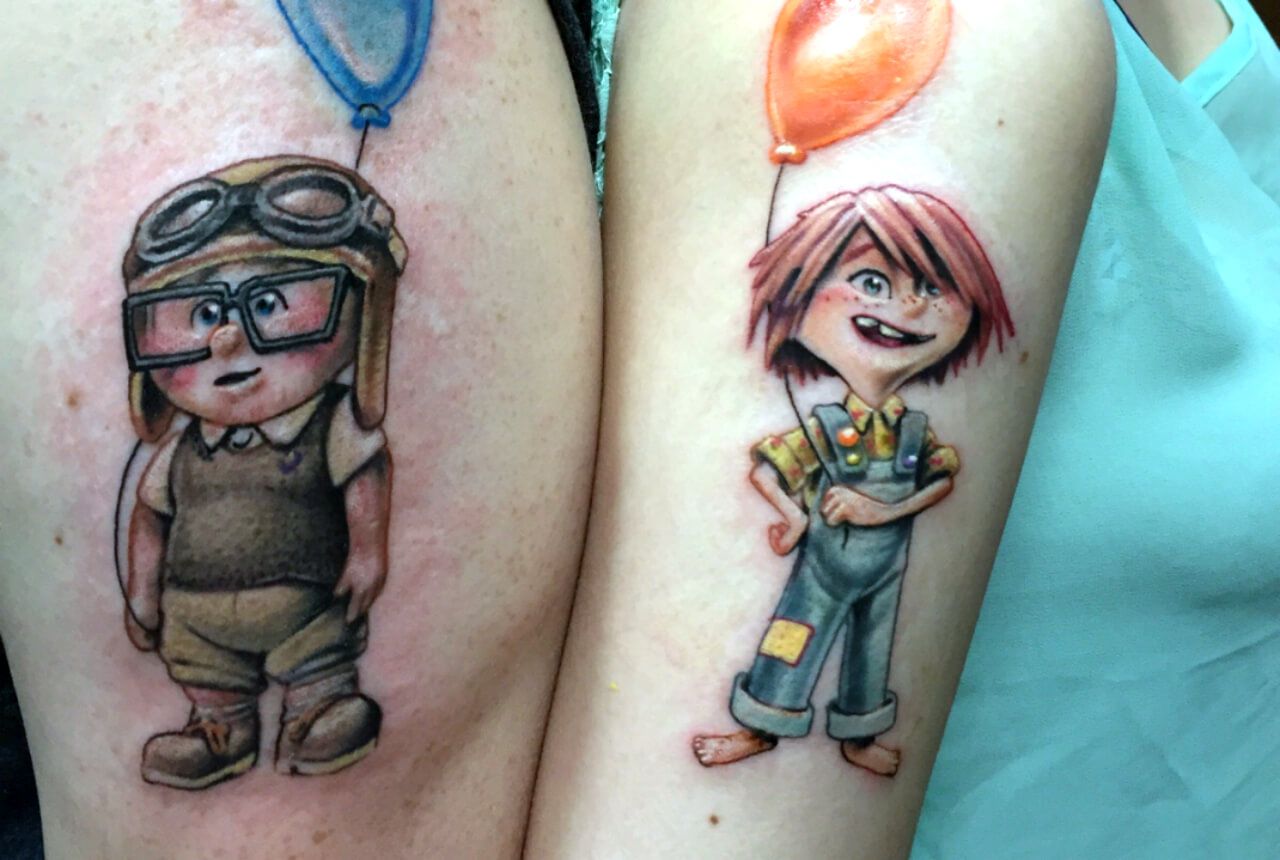 From Disney to Pixar, once you've taken a look at some of these Disney couple tattoos, you'll be wishing upon a star for your very own tattoo.

You can even go beyond Disney and head on over to Pixar to get tattoos that are perfect for a couple of lovebirds. What better way to embody love than with Carl and Ellie from the movie "Up"?

Beauty And The Beast

Nothing tells a tale as old as time like a tattoo of Belle and the Beast. Sure, they got off to a rocky start, but they made it for up in the end in the most romantic and magical way possible.

While the film "Bambie" may wreck you on an emotional level, hopefully these tattoos won't do the same to your relationship. Instead, it'll probably bring you closer to the Bambie in your life.

Beauty And The Beast Duo

You might be OK sporting a tattoo of Belle, but he'll love to sport one of the Beast while he's working out in the gym. These written tats are cool and romantic without being too obvious.

The Most Iconic Love Story

Let your "Beauty and the Beast" wrist tattoos do all the talking. Never has hand-holding been more romantic than when Belle and the Beast stare into each other's eyes.

Who needs Jack and Rose when you can have Jack Skellington and Sally, the creepiest, yet the most romantic couple in animation history? Nothing says love like a tat from "The Nightmare Before Christmas."

We doubt that Elsa herself could have created two snowflakes to symbolize the power of love. This is even better than getting her those pendants that split in half.

What better way to symbolize that you've given your heart to your significant other or vice versa than with these Mickey tattoos? That way everyone will know that you're all heart.

Now you can throw each other some absolutely adorable Minnie kisses every time your hands touch side by side. Only the sweetest couples should dare get these matching tattoos.

You always felt like a Disney princess just waiting for your Prince Charming to come sweep you off your feet. Now you can both wear castle tats on your arms that symbolize your kingdoms coming together.

You know it's true love when you both get matching tattoos of Mickey and Minnie's glove. This way you'll know that you "glove" each other so, so much. Sorry, I had to do that.

There's nothing but love in these Mickey-and-Minnie-themed tattoos. It'll also come in handy in the future if they get Alzheimer's and forget who's who.

You so need a couples' tattoos of Simba and Nala because you're both ferociously in love with each other and are in it for the long haul. Here's hoping that your union lasts forever like these tattoos.

It's true that every Beauty needs her Beast and vice versa. But dang! You know it's true love when you're willing to call yourself a Beast in order to prove to everyone you really love her.

It's time to get your gruesome on with these "Nightmare Before Christmas" tats of Sally and Jack Skellington. But don't come crying to us when this relationship turns into a real nightmare.

Who would have imagined that the immortalized phrase used by Buzz Lightyear from "Toy Story" could be used to symbolize something so romantic?

Love's a battlefield, but you don't have to fight alone or go to a galaxy far, far away. When you've got tattoos of Mickey and Minnie with lightsabers, love can conquer just about anything.

The cool thing about Disney or animated theme couple tattoos is that they're a great way for partners to personify their love without ever having to say I love you again.

Just like Peter Pan and Wendy, your love will never wither away, even if one of you does decide to stay in Neverland while the other goes on to live her life in the real world.

This might look cheesy, but Disney-themed foot tats can be so romantic, especially when you're both in bed watching a comedy and your feet meet to form this cute Mickey glove heart.

If you happen to run into a couple wearing these matching tattoos, don't bother asking if one of them is available, cause the ink says it all, and they're not interested in competing, so back off.

We love Minnie and Mickey Mouse, and with these two tattooed to this couple's calves, it's a safe bet they'll always come together at night when these two hit the hay and cuddle.

This one's creepy for couples because you basically gave yourselves tattoos that symbolize a mother and her son. But it might be an awesome tat combo for – you guessed it – a mother and a son.

Castles In The Night

You and your BFF might eventually move to a different state and have separate lives, but you'll always have Disney, particularly the castle logo tattooed on your feet.

A mothers is one of the most important people in her daughter's life, and if you ask any mother, she'll agree the same is true about her daughter. So these amazing mother-daughter tattoos are real winners around Mother's Day.

Tat blue and red lightsabers on your pinkies. It's the one time when the Force and the Dark Side can truly unite through love. I pinky swear it's true.

You'll feel totally dusted when you and a friend, relative or partner tattoo Tinker Bell and Peter Pan on your wrists. These two are the ultimate best friends, even if they won't admit it to each other.

There's no couple in cyberspace better suited than Wall-E and Ava. And if you want to show the world that you truly have no place in your motherboard for anyone else, then these tats will do the trick.

Got a best friend? Then how about tattooing one of the "Monsters, Inc." BFFs on yourselves? With Sully and Mike Wazowski tattooed on your wrists, no one will ever come between you and your friend.

If you're a Mickey or a Minnie fan, then it shouldn't take you too long to figure out who these tats represent. Best of all, they come with the most magical message of all: love.