Camila Villafane
This Guy Built an Entire Cabin In The Woods And It Cost Next to Nothing April 11, 2019 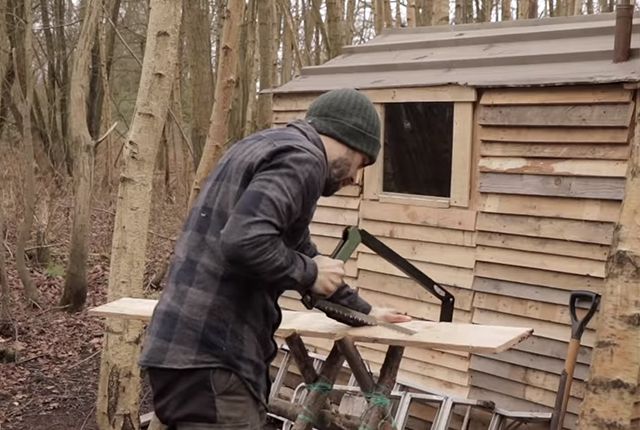 Building a cabin in the woods can be a major undertaking, especially when you’re trying to stick to a severely limited budget like Mike was. Using repurposed pallet wood (and a mixture of power tools and hand tools) helped him assemble one impressive shack. But you don’t have to take our word for it...

The cabin doesn’t have electricity or even solar panels. But it does have other comforts of a home, like shelving and even a small bookcase. Given how cozy the place looks, it undoubtedly makes it tough for Mike to want to rejoin the real world.

Followers of the YouTube channel "TA Fishing" know that Mike is all about experiencing the wild. He takes hiking trips and goes camping solo overnight. And now he’s building something spectacular...

He Was Stacking Material

Mike and his dad were stacking up a bunch of wooden pallets in the yard. Then they took one pallet to their garage and started taking it apart. But what were they trying to do?

They Were on a Mission

They drilled all day, which might have driven their neighbors crazy. But they were on the ultimate DIY mission. And to see their project through, they had to take the pallets apart.

They Tore Them Apart

The father/son duo used drills to remove each plank. Then they used their hammers to remove the nails, which they'd need later. Once they had enough material, they wrapped the wooden planks with rope and carried them out.

Mike wanted to work on a DIY project that would give him the ability to live in the wilderness in the same way that primitive hunter-gatherers did thousands of years ago. But this wasn’t just a pastime for him...

Living Off the Grid

Mike had always loved being able to forage and gather food from nature because he had the soul of a survivalist. But even a bold adventurer like him needs a roof over his head to protect himself from the elements...

They Cleared a Site

Mike and his dad had broken down the pallets into useable timber. So now they needed to go to the forest to clear an area where they could begin building the cabin using nothing but recycled pallet wood.

They Measured the Area

Given how many trees were in the vicinity, Mike and his dad needed to make sure they had the precise measurements of the site. This helped them avoid having to cut down any trees, which would upset nature's delicate balance...

The Needed a Foundation

There was a reason why Mike and his dad had collected so many pallets. They needed the larger ones to build a foundation for the cabin. But that was just the first step, and they had a long way to go...

They Set up the Framework

With a little help from his old man, Mike nailed the timber together using the nails the pair had removed earlier in the garage. It was important to get this part right before they built everything else...

The second stage of the DIY process involved building the side walls with the same pallet material. But once that was done, they looked up and realized they were missing a very important part of the cabin...

A Roof Over Their Heads

To build a roof over their heads, the guys chose a piece of recycled tin they got from an old barn. But this wasn’t the only recycled material they would need if they wanted to pull off such an ambitious project...

Mike and his dad wanted to save some bread when taking on this project. So they used recycled materials, like when they fitted a small window taken from a garden shed. After all, the whole point of this DIY project was to "try and save money by building a cabin in the forest on the cheap."

All Outdoor Homes Should Have One

Once the cabin was complete, Mike would undoubtedly want to walk out and enjoy the beauty of the forest. So he decided to build a front porch. Once he finished working on the outside, he would be able to focus on the interior...

To add a few finishing touches to the porch, Mike hanged two mason jars with copper wiring outside the front door. Then he and his dad lit two white candles and placed them in the jars to use as makeshift lamps  that would let them see when they walked outside to the porch at night.

They Needed Furniture Too

The guys went for a rustic look by making furniture from more spallet wood. This included bolting together a raised bed, and making a small chair and a foldaway table to save space. But how would they survive the chilly weather?

They Opted for a Camping Stove

In order to heat the cabin, Mike and his pop got a camping stove that includes a stovepipe oven attachment that would allow them to bake food. It also had a water container for boiling water for tea or coffee.

In the winter, Mike and his father cooked food using cast iron frying pans on the woodstove. But in the spring and summer, they opted for camp fire using a cast iron grill mounted on a Bushcraft style tripod.

A Mixture of Tools

Building a cabin in the woods can be a major undertaking, especially when you’re trying to stick to a severely limited budget like Mike was. Using repurposed pallet wood (and a mixture of power tools and hand tools) helped him assemble one impressive shack. But you don’t have to take our word for it...

They Documented the Whole Thing

If you ever feel like building a dwelling in the forest, you can get plenty of inspiration from Mike and his dad. They filmed and documented the entire process, and it looks like they had a blast assembling such an incredible DIY cabin. Clearly, these two were up to the challenge!

Adding to the Wilderness Homestead

The cabin doesn’t have electricity or even solar panels. But it does have other comforts of a home, like shelving and even a small bookcase. Given how cozy the place looks, it undoubtedly makes it tough for Mike to want to rejoin the real world.

There’s Not a Lot of Room

You could probably compare the size of this cabin to a backyard shed. There’s not a lot of room, especially with all the furniture. But we're pretty sure Mike and his dad are used to roughing it.

Hope For the Future

When Mike and his dad built this cabin using recycled pallet wood, it was their hope that they would have a place to develop their survival skills further and learn how to scavenge for wild food and cook it like their ancestors did. Looks like their wish came true.