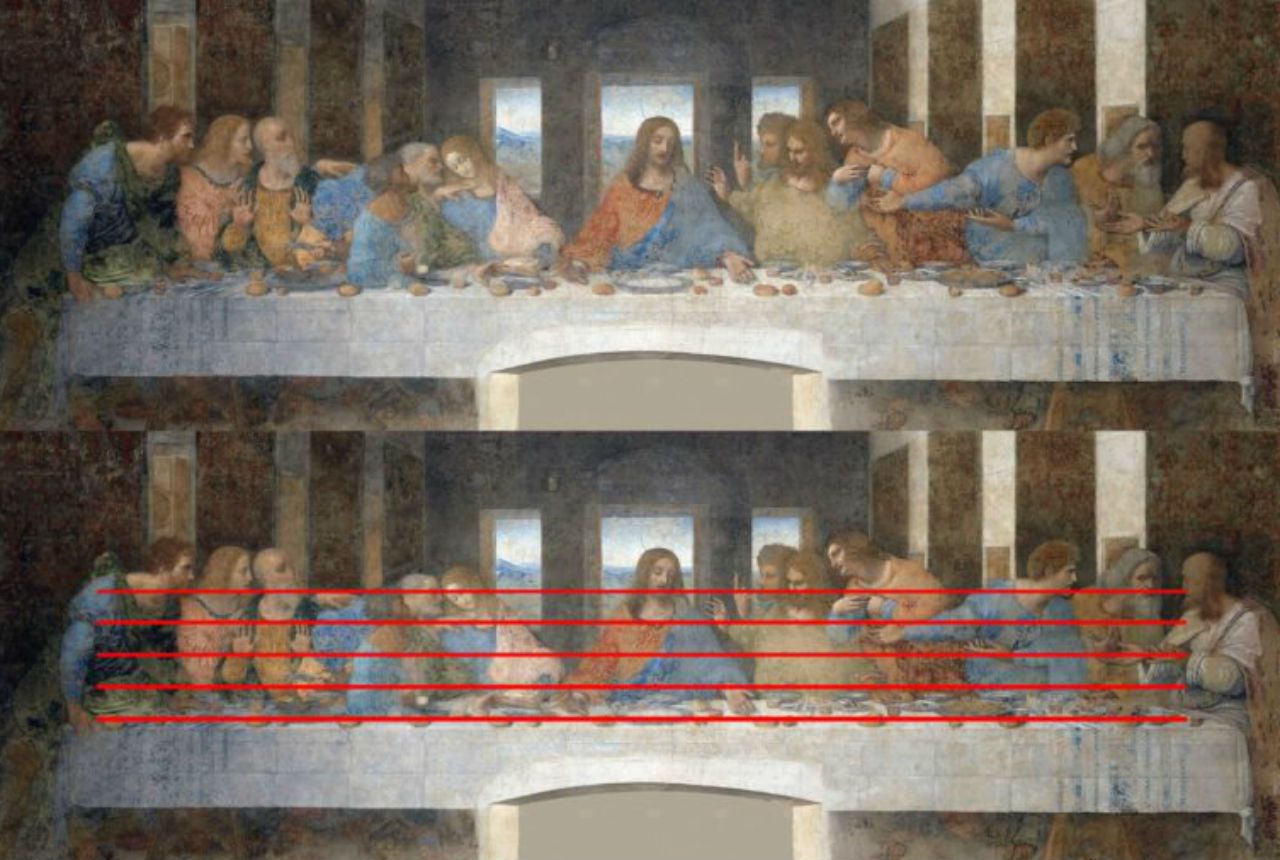 Trying to find hidden meaning in the things from our collective past is nothing new, especially when it comes to some of the more recognizable works of art that the world has seen. Just ask Dan Brown — the guy has made millions off of finding tiny details in Leonardo da Vinci’s work. But da Vinci isn’t the only artist out there who liked hiding things in his paintings. Here are some of the coolest Easter eggs in famous art.

Portrait of a Lady with a Unicorn, Raphael

For a lot of years, it wasn’t even clear who was actually responsible for Portrait of a Lady with a Unicorn. The original, which was painted in 1505-06, has been changed several times, including once in the mid-17th century, when an unknown artist turned the subject into St. Catherine, covering her shoulders and putting a wheel and palm frond in her lap.

About That Unicorn, Though

During a restoration in 1934, that wheel and palm frond were actually found to be hiding a unicorn. 25 years later, it was discovered the unicorn used to be a dog. Although divided, common belief among scholars is that the painting was originally commissioned for a wedding (the dog represents fidelity). When the nuptials were called off, it was replaced with a unicorn (representing chastity and virginity).

This 1595 portrait of the Roman god of wine, fertility, and “ritual madness” looks like a lot of other 16th century portraits. There’s semi-nudity (but not in an overtly sexual way), a bowl of random fruit, and — of course — a carafe of wine.

Wine as a Mirror

It wasn’t until 1922 that Caravaggio’s miniature ode to himself was first discovered. A closer inspection of the carafe in the bottom lefthand corner reveals a tiny portrait of the artist, which was confirmed in 2009 using modern tech methods.

Jan van Eyck’s 1434 The Arnolfini Portrait has set itself apart from other 15th century works of art for a number of reasons, and it’s considered to be both original and complex for its time. Van Eyck managed to create something that seems to share space with the viewer, giving a full 360º view through the use of a mirror on the opposing wall.

Man in the Mirror

But van Eyck didn’t just create a portrait of a marriage when he painted The Arnolfini Portrait. Take a closer look at the mirror in the background and you’ll see a third figure staring back into the room. Although it isn’t confirmed to be the artist himself, it is widely believed to be so.

The “young woman” in Seurat’s 1888-90 portrait happens to be the artist’s 20-year-old mistress, Madeleine Knobloch. Turns out, she may have actually been pregnant with his child at the time the painting was created.

Turns out, the frame on the wall behind Knobloch isn’t actually a frame at all. Or, at least, it didn’t start out that way. Seurat had originally painted himself into a mirror, but on the advice of a friend decided to paint over it.

The Ambassadors, Hans Holbein the Younger

1533’s The Ambassadors has the distinction of being multiple types of paintings in one. On the surface, it’s both a double portrait (of landowner Jean de Dinteville and Bishop of Lavaur Georges de Selve) and a still life.

But there’s something weird about Holbein’s work: and that something is in the form of a giant, distorted skull in the center of the painting. It’s actually one of the more famous examples of anamorphosis, which requires the viewer to look at it from a separate angle in order to get the full picture. Morbid, but cool.

Medieval master Giotto di Bondone is responsible for some of the most beautiful (and famous) religious artwork, which you can find in the Basilica of St. Francis in Assisi. But the artist managed to hide something in fresco number 20, which depicts the life and death of St. Francis, for 700 years.

Devil in the Clouds

Perhaps one of the reasons it managed to stay hidden for so many years is that it isn’t actually something that can be spotted from ground level. In fact, it wasn’t until modern day restorers got up close and personal with the fresco that the satanic image could be seen.

While there are plenty of 15th century paintings depicting the Madonna and the baby Jesus, there aren’t exactly an overwhelming number of them with UFOs painted into the background. So this work by Domenico Ghirlandaio is something of a standout.

The odd sphere painted into the sky above the Madonna’s head could possibly be written off as a weird cloud, or maybe even a star that’s visible in the middle of the day. But then there’s the guy staring at it from the shore, and that is not the reaction of your typical daytime stargazer.

Da Vinci’s 1494-95 masterpiece The Last Supper asks plenty of questions that we don’t seem to have the answers to, even after 500 years. Is that Mary Magdalene at Jesus’ side? Why do twelve people need to all sit next to one another?

But even Dan Brown didn’t see this one coming. Look closely at the loaves of bread on the table, and you’ll notice something beyond your average love of carbs. The loaves actually create a 40-second musical piece, if looked at as musical notes.

To the untrained eye, van Gogh’s 1888 Cafe Terrace at Night is a lovely evening scene set against the picturesque backdrop of Arles, France. But a 2013 academic paper promoted the idea that perhaps the artist had something a little more religious in mind when he painted it.

More specifically, it’s believed Cafe Terrace at Night is an homage to The Last Supper. Of note are the twelve cafe patrons (like the apostles), the central figure in white (Jesus), and the cross-like shape of the window pane directly behind him.

Hieronymus Bosch’s 1490-1510 triptych oil painting has divided art historians for centuries. No one can quite figure out if it’s meant to caution against sins of the flesh or celebrate their pleasure. It is, however, full of unique imagery and overall sexiness.

Check out the third panel, which is meant to represent Hell. Along with a ton of other weird stuff meant to represent the deadly sins (like a bird monster eating people on its toilet throne), you’ll find some music is written over a person’s rear. Lucky for you, a college student transcribed and recorded the music, which you can listen to here.

Also known as Flemish Proverbs, The Blue Cloak or The Topsy Turvy World, this 1559 piece by Pieter Bruegel the Elder is meant to depict the many Dutch language proverbs and idioms in use at the time. Like The Garden of Earthly Delights, it’s chock full of fun Easter eggs.

The Dutch and Their Proverbs

Many of the sayings portrayed in the piece are things you’d probably never use in everyday conversation, however colorful they may be — “He who eats fire, craps sparks” should definitely make a comeback, though. But others, like “the blind leading the blind” are still very much in use today.

Before its restoration in 2014, 1641’s View of Scheveningen Sands seemed to be nothing more than a nice beach scene wherein a bunch of people are standing around, staring out into nothing. But why, though?

During its restoration process, however, it was discovered that a beached whale appeared to have been painted over at some point in the work’s history. Shan Kuang, a restorer who worked on the painting, shed some light on things, explaining that the depiction of a dead animal was actually offensive in the 18th to early 19th centuries.

Arguably one of — if not the — most famous paintings in the world, da Vinci’s Mona Lisa holds more than her fair share of secrets. We already know the Italian Renaissance master was a fan of Easter eggs, but the Mona Lisa is the art world’s version of “a riddle, wrapped in a mystery, inside an enigma.”

Too Many to Count

Like the appearance of the letters LV under her eye. Or the number 72 (or possibly L2) on the arch in the background. The fact that she has no eyebrows or lashes indicates she could have been a prostitute, as those were the only women who removed their facial hair in the 16th century. But under ultra-high resolution scans of the painting, there’s evidence that she once had both. In fact, it seems as though the Mona Lisa had been reworked a number of times, which basically means that she will forever be a mystery.