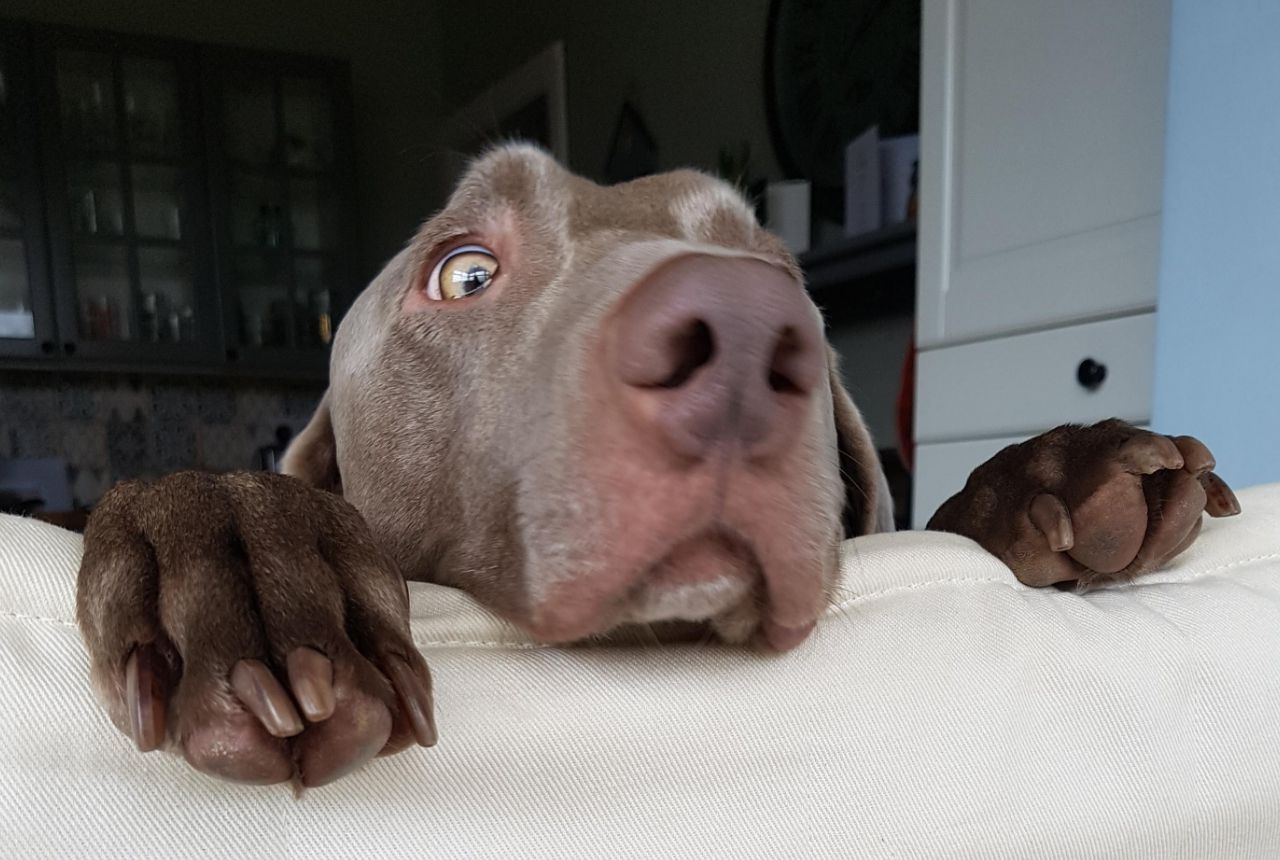 We often think of dogs are majestic and brave. But any dog owner will tell you most dogs are actually scaredy-cats. And now we finally have the proof. So here are 25 funny pics of scared dogs.

This poor little corgi is not impressed with a sheepy toy. As the motorized toy jumps in the air, the poor pup does the same in fright.

It's over, vaccuum cleaner. This dog has the high ground. The Dalmatian's owner is being very tolerate of her fraidy pup.

This poor pug is having a bad day, and it's all thanks to a squeaky giraffe toy. Even gifts made specially for dogs can be terrifying.

He Ain't Heavy, He's My Dog

This dog is afraid of going over bridges. There's only one thing for it: It's time to be carried. This isn't the only dog that deals with fear by getting a lift.

Getting older can be scary, but this poor dog is really not handling it well. A little card hat and balloon seems to be too much for the pup.

Cuddles cure all fear. This dog is a smart cookie, even if it's not particularly brave.

There's strength in numbers, so these corgis probably shouldn't be so terrified of this zucchini. But it's always hard to get perspective when you're being terrorized by a vegetable.

Going to the vet can be a daunting prospect. This scared dog is willing to tolerate the experience... as long as its owner is nearby.

Is there anything more terrifying than a toy mouse? Probably, but don't tell this overly nervous collie.

This dog is apparently so afraid of rain that it's pretending not to notice the car has stopped and that it's walk time.

This dog and cat were both so afraid of noisy fireworks that they cuddled up together. This photo was taken just as a loud explosion startled the pup.

Kittens can be deadly. They say that curiosity killed the cat, but what did the cat kill? This dog is taking no chances.

This forlorn canine is hiding from the fireworks in the safest place imaginable: wrapped up in its owner's arms. The pair look very snuggly.

Puppies can be forgiven for having moments of fear. Luckily there was a small human pup on hand to help comfort this little fluffball.

In this pug's defence, this terror is probably justified. We'll never know why the dog is being held by someone in a horrific pug mask (and matching pug shirt) but we can only hope that everyone got out of this terrible situation unscarred.

Parenthood is terrifying no matter your species. This dog doesn't seem to he thrilled at being introduced to his new offspring, but at least it's helping the tiny puppy to build up some self-confidence.

It's bad enough when humans use vaccuum cleaners. When they start turning on as if by magic, as with this robotic vacuum cleaner, you've got to hide wherever possible. Even if that means squeezing into a tight space in the kitchen.

Hiding Behind the Couch

Alas, fireworks are the culprit here yet again. This poor dog, peeking out behind the couch in a brave attempt to check whether the scary explosives have made their way into the house.

Santa is a pretty scary guy. After all, he knows when you've been sleeping. This dog refused to take a photo with St. Nick until his owner joined in. Even so, the poor pup still looks terrified.

Huskies are big dogs. They can be quite intimidating, so it's good to know that they're actually really soft fluffballs who get scared like the rest of us.

This dog, afraid of the lawnmower, has found the perfect hiding place: wrapped up in a hose pipe.

Sometimes, the best place to hide is in bed. Get under the blankets, snuggle into the pillows, and you too can feel as safe and secure as this corgi.

This dog is trying very hard to look like it's not terrified by the cow in the distance. This isn't working, though, as any time the dog's owners try to move down the road, the dog is staying firmly in place.

The Gang's All Here

Everyone's hiding in the bathroom because of the fireworks. There a dog, a cat, a safety blanket and a cuddly toy. What more can anyone want in life?

This is the look of a dog who just realized it's on the way to the vet. Either that, or car travel really isn't agreeing with the poor pup.