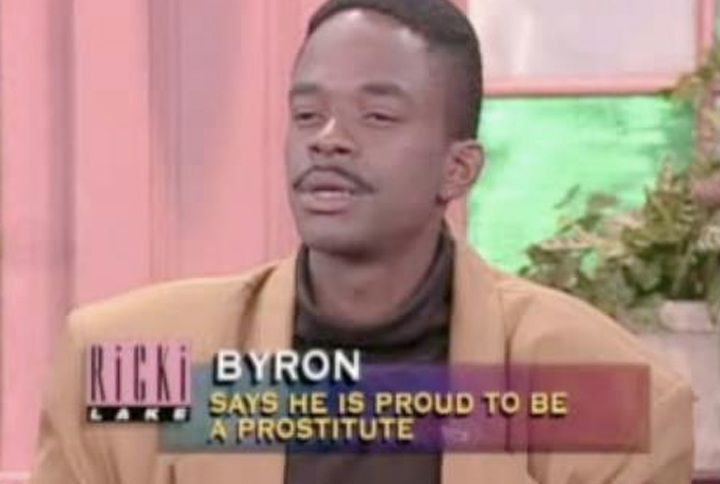 You’ve all seen them: those talk show captions that make you go “Wut?”; the ones where you yell at the TV “THAT’S why we have DVR!” and well, now you’ve got a whole bunch of those funny talk show captions to look at in your quest to better understand why you’re better than most of the people on TV. If a talk show caption was cringey, funny, or just completely WTF, it’s here.

What was it they said about this on South Park?

As Cartman would have told us on his quest to appear on daytime television, this little (irony intended) girl isn’t FAT, she’s big boned. Okay, maybe she’s also big armed, legged, and headed but she’s also like 4 foot tall, so let a girl grow some, eh?

If you've got to have two of something...

If there was ever a Tinder intro NO MAN could ignore, it’s this. Right here. Imagine swiping left on a bunch of women who “live, laugh, love,” or who claim to be a “total nerd at heart,” or who “like to have fun” and then finding THIS WOMAN in your queue. Match made in your dreams, amirite?

Klassy with a K

Now let me tell you a little bit about a lobster dinner: that ish IS NOT as expensive as you think it is. Especially a lobster buffet. A BUFFET! Have you ever been to a buffet because they are NASTY. Kind of like a date that’ll set you back a cool $18 (before the tip).

Okay, there are A LOT of questions here that need to be answered. Where did Brittany get a passport AND a visa to go to Brazil? Who paid for this ticket? Did she have an escort or did her parents go with her? Did her parents know WHY she wanted to go to South America? Did they care?? I’ma need a whole special to answer these questions and more, thanks.

Sorry, ladies, he's not into Slipknot

Listen, Darren, if you really want to wear that mask AND have a drama-free relationship there are exactly two places you can go to find a woman fit for the part: the Black Hole at any Oakland Raiders game (fitting) or…no, that’s about it. Hope you like football!

I don’t really see the issue here. If a bunch of dudes can order pillows online, name them, take them on dates, and even MARRY their waifu plushy “friends” then why can’t my girl Patty get online and make some characters online? Also, are we sure she’s not just writing to people?

You do you, Dwight

Look, we all know The Ricki Lake Show has been off the air for, well, probably longer than a lot of people reading this have been alive, but anyone with a mullet that strong and a tie that skinny SHOULD be proud that ANYBODY pays him to have sex with them. Good on you, Dwight.

Put an onion ring on it

Hi, Philippe is it? Philippe: there are literally DOZENS of channels on YouTube where people eat for your pleasure. They eat ALL KINDS of crap. You want to see a woman eat a lightbulb? Some flooring? Maybe a ’72 Chevy Nova? Someone’s out there doing it and it doesn’t have to be your fiancé.

So…what does one need to do to become a vampire EMPREROR? Definitely asking for a friend who wants to know things like “Does this mean you lord over other vampires who then do your bidding like bring you pop stars for snacks and stuff?. Again, for a friend…

ALL people find her annoying

Dude, Tiffany, if you think fat people are gross try eating something else, okay? Like fat geese or fat Cornish game hens…maybe a fat potato? You don’t have to eat those fat people, boo. In fact, maybe don’t eat people at all, this ain’t an island in the Pacific in the ‘40s, geez.

I think the most interesting part of this caption isn’t that he married a horse, it’s that Jerry Springer got the EXCLUSIVE on telling the story. Were you too good for this, Montel? Geraldo? OPRAH??? I can’t believe anyone would pick Jerry Springer over Oprah. Such a backwards choice…

He deserved it, I'M SURE

Now listen here, A A ron: someone done messed up and it was not the people who allegedly “victimized” you; you’re a ginger and we all know you have no soul so in reality someone was just helping to cleanse the planet of a soulless vessel. They’re the real MVPs.

Now I don’t think this is anything a person should be on a talk show about because honestly, who ISN’T obsessed with pooping?? Toilet time is my favorite part of the day. You go in there on a mission, you complete it, you clean up like nothing ever happened; it’s like being a porcelain ninja.

I have never seen a more smug, satisfied expression from someone who just proved his girl was stepping out with another dude. Also, let’s not forget that the sex must have been at least halfway decent for him to notice the difference and now he’s not getting that anymore. Not so smug now are you, guy?

Tina, you’re not “barsexual” you’re a lush. All boozy brats do what you do. “OH MY GAWDDDDD, LOOK AT THAT GIRL SHE’S SO HOT, RIGHT? It would be like, SO BAD if I went over and kissed her, right? I shouldn’t do it. It’s a bad idea, right? Maybe I should just introduce myself first” and BAM, you’re making out with some girl you just met. YOU ARE NOT A UNIQUE SNOWFLAKE, TINA.

Was there nothing better to do?

We get it, buddy, you’re Team Jacob. I will tell you right now, though, that some $.99 contact lenses and…do you even have fangs, guy? Your teeth look pretty round for a werewolf. Maybe you just want people to know you’re Team Jacob? Because you do look like a guy who loves Twilight, so…

This feels like that start of the most awkward game of “Guess Who?” ever

“Is the father African American?”

“Okay, doesn’t really knock down any tiles. Does the father wear glasses?”

Maybe? I mean, we weren’t really wearing anything when this happened, so…

“You know what, Debbie, let’s just DNA test the whole state, huh? Maybe that’ll make it easier. Does the baby’s daddy live in your state?”

“Play this game yourself, Debbie.”

This feels like if someone asked OJ to write the book on how he’s NOT Khloe Kardashian’s father. “Yeah, see, there’s no way I’m the father but if I WAS gonna impregnate Kris Kardashian, I’d start by calling my attorney and telling him I need to have an ‘emergency meeting’ but there wouldn’t a meeting between me and him, see.”

Watch out, this kid is hardcore

Can you imagine being the new kid on the cell block and having to be part of the “so why are you here” conversation. Like here’s a kid who murdered his parents with a mixing bowl, and then the kid who burned down the local sports complex when he didn’t make the team, and then there’s this kid who has to say “I threw a pinecone”.

Yes. The answer to this is always "yes"

GIRL. You can’t even be mad if this is true. You and your man are gonna have fights about everything. Like what happens if you ask him if you’re hotter than a 7? You know what’s ALWAYS hotter than a 7? A pizza. Even a bad pizza is still better than a girlfriend who takes you on a talk show to ask if you’re cheating. Just saying…

I have some questions

A gay demon, you say? I need to know more. Like, how do you KNOW it’s a gay demon? Did he redecorate your living room? Demand you accompany him while shoe shopping? Did he insist on drinking with a straw? Did he order a cosmo instead of a beer?? Oh, he likes the D now? Coulda just said that from the beginning.

Girl, I know where those condoms are. Get in your car, drive to the CVS, ask a cashier to direct you to the “Family Planning” section, look at any shelf once you’re there and you will see all the condoms Brandon allegedly bought. They never left the store. He’s playing you, Crystal. Shoulda looked in your ball, you would’ve known.

Is this some advanced gene therapy?

Here’s the thing: I bet you Demetrius is just bad at science and intentionally didn’t pay attention during the sex ed portion of his 8th grade science class because he didn’t want the other kids to think he only paid attention when it was sex. That’s totally a thing that happens, shut up!

HARD left swipe on this one

Unless this woman is preparing for a night of Edward 40 Hands, a lengthy stay in Times Square to watch the ball drop on New Year’s Eve, or MAYBE a cross-country road trip to kill her astronaut ex-boyfriend’s new girlfriend, there’s just no reason for this.

This reminds me of a musician friend of mine who once told me “If I ever win a Grammy I’m gonna step up to the mic to accept my award and I’m just gonna say, ‘Today for lunch, I had clam’” and you know what, he was full of it and so is this dude.

And YOU'RE not embarrassed of that shirt??

Had to look up the definition of “hoochie” to see if it’s really THAT BAD. In case you’re curious, it’s “A young woman who has many casual sexual partners or who dresses or behaves in a sexually provocative way”. So basically Lisa is jealous her sister hooks up. Grow up, Lisa.

Whether she likes it or not

I haven’t wanted to watch an episode of Maury since I was on Maury, but this has my interest piqued. I need to know, like, HOW AFRAID of chickens is this woman? Is she gonna be so scared she pees- OR POOPS- her pants because that is something I will stay tuned for.

Did no one notice it was missing??

Imagine you’re this woman and you find a tooth you don’t recognize in your house: there have to be A LOT of questions that go through your mind before you arrive at the conclusion of “He’s cheating” but once you get there, you have to start asking just HOW that tooth came loose and THAT’S where the fun begins…

Were they fire ants because that picnic would be lit

What episode of Maury did this air on? Is this the “I’m a special snowflake who needs to be coddled by my parents at every turn” or was this on the “I’m so soft they call me ‘Toilet Paper’ as a nickname at school” episode? Either way this kid needs a chill pill and some exposure to nature.

Anthony needs a maid, not a fiance

Latoya, you are a 21st century woman engaged to a 12th century man. If you don’t want to do that stuff you’ve got a couple options: hire a maid, buy some new appliances, or get yourself a new man who knows how to hire a maid or buy his own appliances. There, options.

The no nose knows

I can only see you in the profile, Tiffany, but I feel like I can safely say that you’re better looking than any man, woman, child, or perhaps even sheep without a nose. But if your man is using that nose hole for a sex thing, just give up now and move on. Like you’re doing.